This article shows trends in municipal waste generation and treatment in the European Union (EU) from 1995 to 2021. There is a very distinct trend towards less landfilling as countries move steadily towards alternative ways of treating waste.

Municipal waste accounts for only about 10 % of total waste generated when compared with the data reported according to the Waste Statistics Regulation (env_wasmun). However, it has a very high political profile because of its complex character, due to its composition, its distribution among many sources of waste and its link to consumption patterns.

Figure 1 and Table 1 show municipal waste generation by country expressed in kilograms per capita. To illustrate trends, Table 1 shows waste for selected years, covering the period 1995 to 2021. For better readability, Figure 1 covers only the years 2006 and 2021. Both include the EU aggregates for comparison. In Figure 1, countries are ranked in increasing order by municipal waste generation in 2021.

For 2021, municipal waste generation totals vary considerably, ranging from 302 kg per capita in Romania to 834 kg per capita in Austria. The variations reflect differences in consumption patterns and economic wealth, but also depend on how municipal waste is collected and managed. There are differences between countries regarding the degree to which waste from commerce, trade and administration is collected and managed together with waste from households.

From 2004 on, methodologies were finalised in most countries, so the waste generation time series of 2004 and later is more accurate and stable than that between 1995 and 2003. 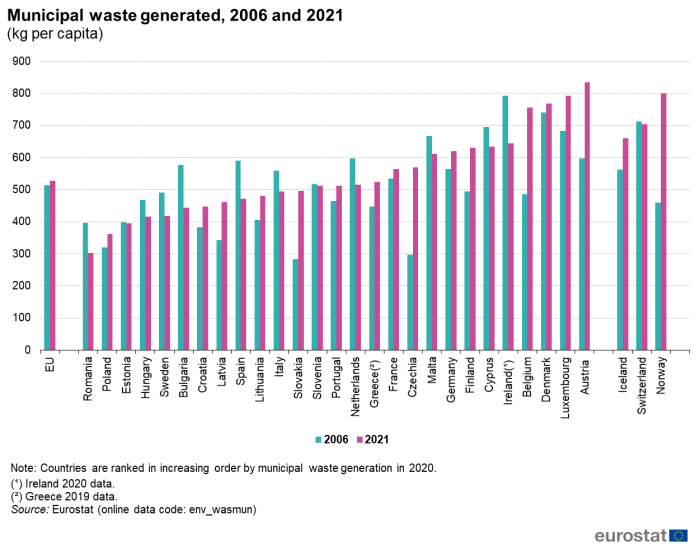 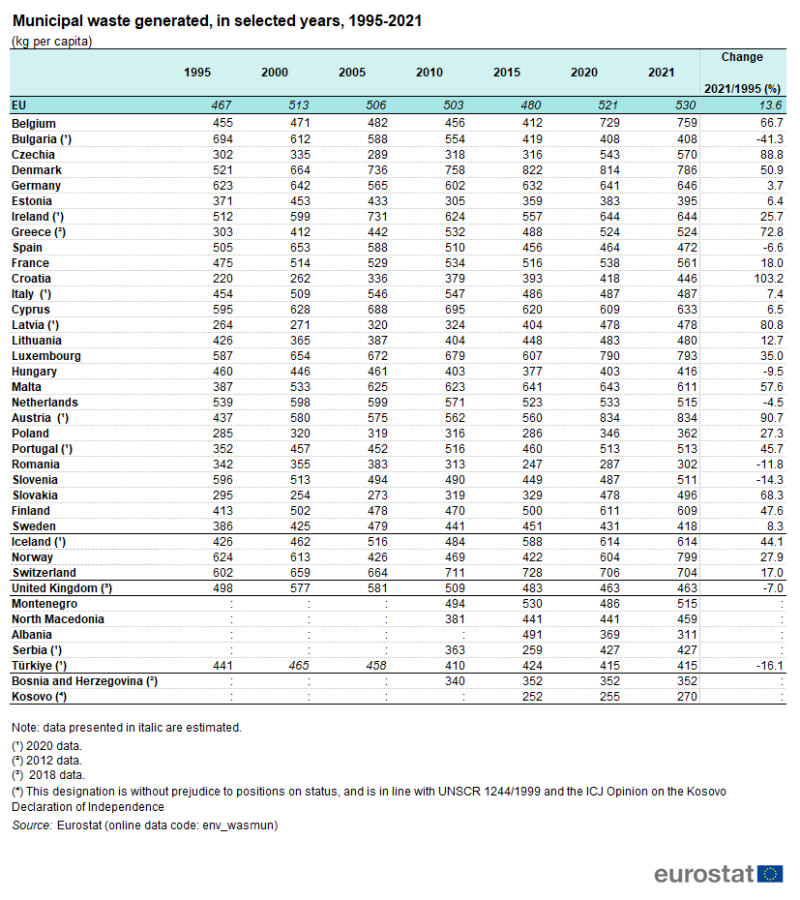 In this section, differences in the management of municipal waste are shown and treatment strategies are identified based on reported amounts of municipal waste landfilled, incinerated, recycled and composted. EU Member States are asked to distinguish between incineration with and without energy recovery[1]. In this article only the total amount incinerated is analysed.

The 'other treatment' category was calculated as the difference between the sum of the amounts treated and the amounts of waste generated. This difference arises in countries that have to estimate waste generation in areas not covered by a municipal waste collection scheme and thus report more waste generated than treated. In addition, the 'other treatment' category reflects the effects of import and export, weight losses, double-counting of secondary waste (e.g. landfilling and recycling of residues from incineration), differences due to time lags, temporary storage and, increasingly, the use of pre-treatment, such as mechanical biological treatment (MBT). This may even lead to a rise in 'other treatment' for a given year. At EU level, these effects contribute only marginally and tend to cancel each other out. However, at country level, the effects can be considerable.

Even though more waste is being generated in the EU, the total amount of municipal waste landfilled has diminished. In the reference period, the total municipal waste landfilled in the EU fell by 67 million tonnes, or 55 %, from 121 million tonnes (286 kg per capita) in 1995 to 54 million tonnes (121 kg per capita) in 2021. This corresponds to an average annual decline of 3.0 %. Also, for the shorter period 2006-2021, landfilling has fallen by 3.0 % per year on average.

This reduction can partly be attributed to the implementation of European legislation, for instance Directive 62/1994 on packaging and packaging waste. By 2001, EU Member States had to recover a minimum of 50 % of all packaging put on the market. With the revised recovery target of 60 % to be achieved by 31 December 2008, there was a further rise in the amount of packaging waste collected separately. By 31 December 2025 65% of the packaging waste has to be recycled.

Furthermore, Directive 31/1999 on landfill stipulated that EU Member States were obliged to reduce the amount of biodegradable municipal waste going to landfills to 75 % by 16 July 2006, to 50 % by 16 July 2009, to 35 % by 16 July 2016 and to 10% until 2035. The reduction was calculated on the basis of the total amount of biodegradable municipal waste produced in 1995. The Directive has led to countries adopting different strategies to avoid sending the organic fraction of municipal waste to landfill, namely composting (including fermentation), incineration and pre-treatment, such as mechanical-biological treatment (including physical stabilisation).

The European Commission adopted an ambitious Circular Economy Package, which includes revised legislative proposals on waste with a higher common target for the recycling of municipal and packaging waste and lower limits for landfill of municipal waste.

Mechanical biological treatment (MBT) and sorting of waste are not covered directly as categories in the reporting of municipal waste treatment. These types of pre-treatment require an additional final treatment. In practice, the amounts delivered to mechanical biological treatment or sorting should be reported on the basis of the subsequent final treatment steps. However, the way these amounts are allocated to the four treatment categories (incineration, landfilling, recycling and composting) varies significantly and some countries report only on the first (pre-)treatment step.

As a consequence, reporting on the current set of variables often requires additional information to relate the amounts of municipal waste landfilled, incinerated, recycled and composted to the amounts generated at country level. 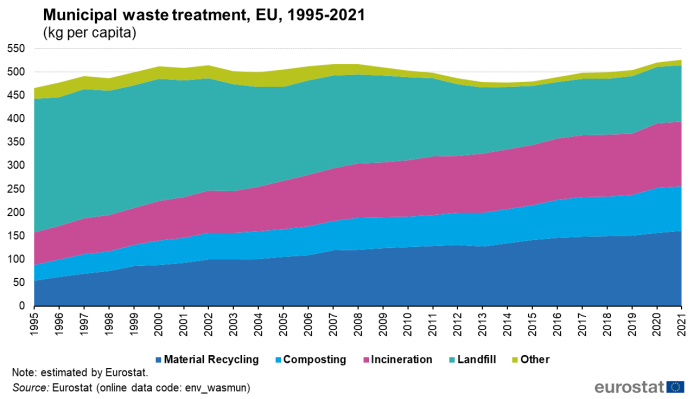 The municipal waste classification is based on the Directive 851/2018 amending the Waste Framework Directive (Directive 2008/98/EC) and on the definitions for the section on waste in the OECD/Eurostat Joint Questionnaire. Further information is available in the

Data for Cyprus refer only to the area under the effective control of the Government of the Republic of Cyprus.

Data for Liechtenstein are included in Switzerland.

Eurostat has collected and published data on municipal waste since 1995. Eurostat has conducted surveys on European waste data using the OECD/Eurostat-Joint Questionnaire as the main source. After the introduction of the Regulation (EC) No 2150/2002 of 25 November 2002 on waste statistics the data collection on municipal waste based on the joint Questionnaire was continued to maintain the time series and to offer consistent data in an international context outside the EU (OECD, UN).