The objective of the WEEE Directive is to promote reuse, collection, recycling and other forms of recovery of waste electrical and electronic equipment, in order to reduce the quantity of such waste to be disposed of. In 2017, the collection rate of WEEE was 47 % in the European Union (measured as the volume of WEEE collected in relation to the average amount of EEE put on the market in the three preceding years, i.e. 2014-2016).

EEE put on the market and WEEE collected in the EU

Figure 1 shows trends in the amount of electrical and electronic equipment (EEE) put on the market and WEEE collected and treated in the EU in the years from 2010 to 2017. Missing data for some EU Member States have been estimated in order to show the developments for the EU as a whole. Information on the time lag between the year in which the EEE is put on the market and the year when it becomes waste is currently not available in the data collected within the frame of the monitoring of the WEEE collection target. This collection target changed in connection with the revised monitoring introduced from the reference year 2016 onwards (see the Context section below for more details). 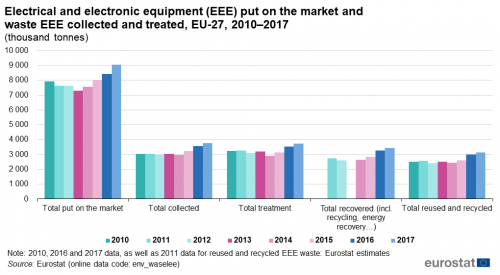 Electrical and electronic equipment put on the market by country

Figure 2 shows the shares of the main EEE product categories put on the market, reflecting the consumption pattern for EEE in the different EU Member States and other reporting countries.

Medical devices (category 8), Monitoring and control equipment (category 9) and Automatic dispensers (category 10), which are grouped together in Figure 2, account for only a small share of the total EEE put on the market. Together, these three categories account for only 3.8 % of the total at EU level. Out of the 27 EU Member States, 19 reported even lower shares than the EU total for the combination of these three categories in 2017. 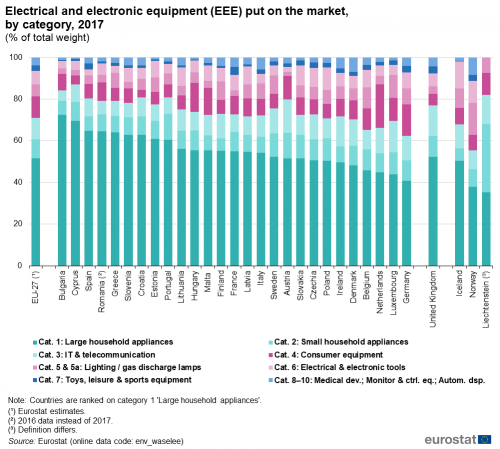 Collection of WEEE by country

Figure 3 shows the amount of WEEE collected by country for the years 2008 and 2017, measured in kg per inhabitant. The figure shows both the collection level in the different countries and the progress made from 2008 to 2017. In 2017, the total amount of collected WEEE varied considerably across the EU Member States, ranging from 2.4 kg per inhabitant in Romania (2016 data) to 14.1 kg per inhabitant in Sweden. The variation in the collected amounts reflects differences in EEE consumption level between countries, as well as differences in the performance of their respective waste collection schemes. 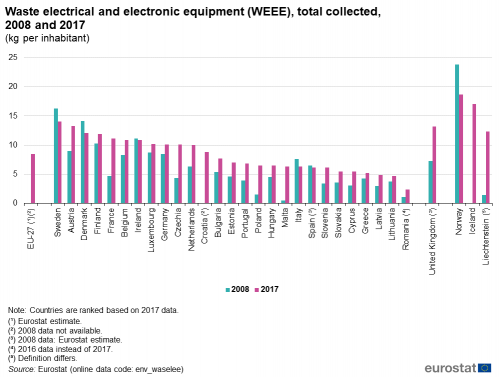 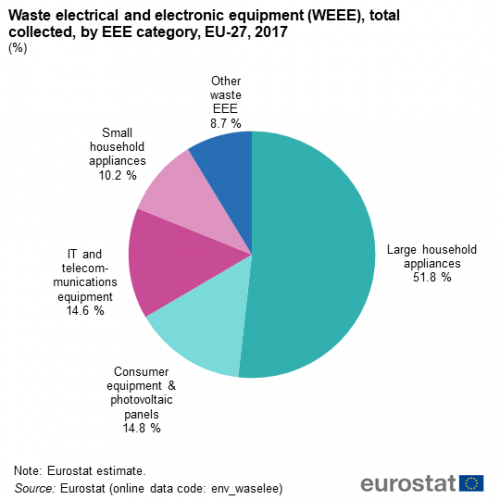 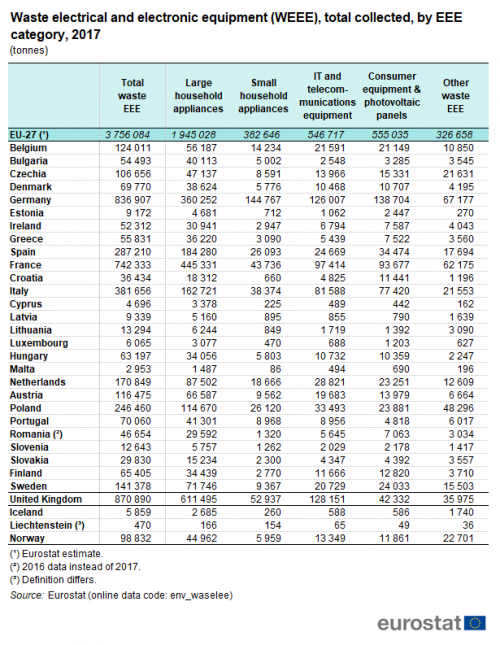 Table 1: Waste electrical and electronic equipment (WEEE), total collected, by EEE category, 2017
(tonnes)
Source: Eurostat (env_waselee)
The recast of the WEEE Directive (2012/19/EU), which entered into force on 13 August 2012, introduced a stepped increase in the collection targets, taking effect for reference years 2016 and 2019 respectively. From reference year 2016 onwards, the annual collection target is defined as the ratio between the collected amount and the average weight of EEE put on the market in the three preceding years. The collection target is set at 45 % for reference year 2016 (as reported in 2018) and will rise to 65 % for reference year 2019 (to be reported in 2021). [1] In Figure 5, WEEE collected in 2017 is shown as the share of the EEE put on the market. The share is calculated as the ratio of the amount of collected WEEE in 2017 in relation to the average amount of EEE put on the market in the three preceding years, i.e. 2014-2016. These ratios indicate how much more WEEE the EU Member States need to collect to achieve the collection targets of 45 % and 65 %, respectively. According to the data, 19 EU Member States (Croatia, Bulgaria, Austria, Hungary, Estonia, Czechia, Cyprus, Ireland, Sweden, Portugal, Finland, Slovakia, Luxembourg, Latvia, the Netherlands, Spain, Belgium, Poland and Germany) surpassed the 45 % WEEE collection target in 2017, while Denmark (44.9 ) and France (44.7 ) came very close. Two Member States had already in 2017 met the new target of 65 % collection rate for WEEE, which comes into effect from reference year 2019 onwards. These countries were Croatia (81.6 %) and Bulgaria (79.4 %). The WEEE collection rate of Bulgaria remained high in 2017, despite falling from the high rates recorded in the previous years (106 % in 2015 and 97 % in 2016); these high rates were achieved through collection campaigns for WEEE organised in 2015, offering vouchers or cash fees as motivation. Austria (62.4 %) and Hungary (60.6 %) also came close to meeting the future 65 % target already in 2017. 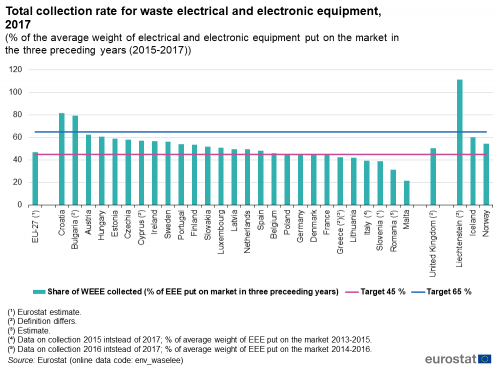 Data on WEEE are reported by the EU Member States according to Decision 2005/396/EC laying down rules for monitoring compliance of EU Member States and establishing data formats for the purposes of Directive 2012/19/EU of the European Parliament and of the Council on waste electrical and electronic equipment.

Member States have the obligation to report to the Commission within 18 months of the end of the reference year on the achievement of the targets for WEEE collection, re-use, recycling and / or recovery on the basis of Decision 2005/369/EC. This Commission decision remained valid after Directive 2002/96/EC was repealed and replaced by Directive 2012/19/EU (article 25).

The reported data become available in the Eurostat database approximately three months after the reporting deadline. Data are available from reference year 2005 onwards.

WEEE is a complex mixture of materials and components that — because of their hazardous content— can cause major environmental and health problems if not properly managed. Moreover, production of modern electrical and electronic equipment requires the use of rare and expensive resources. To improve the environmental management of WEEE, contribute to a circular economy and enhance resource efficiency, the advancement of collection, treatment and recycling of electronics at the end of their life is essential.

The management of WEEE is regulated by Directive 2012/19/EU of the European Parliament and of the Council of 4 July 2012 on waste electrical and electronic equipment (WEEE).

The first WEEE Directive (Directive 2002/96/EC) entered into force in February 2003. The Directive provided for the creation of collection schemes where consumers return their WEEE free of charge. These schemes aim to increase the recycling and / or re-use of WEEE.

Directive 2002/96/EC was repealed on 15 February 2014 and replaced by Directive 2012/19/EU on waste electrical and electronic equipment (WEEE), which introduces a stepped increase in collection targets for years 2016 and 2019. Furthermore, from reference year 2018 onwards, the scope of the Directive is extended to all categories of EEE. Consequently, the definition and number of the categories will change.

Annex I to Directive 2012/19/EU defines 10 categories of electrical and electronic equipment covered by the Directive:

Annex II contains an indicative list of products falling under the categories in Annex I.