In 2020, over 2.5 million tertiary students in the EU were studying in culture-related fields.

In 2020, the average number of foreign languages learnt by teenagers in the EU was highest in Luxembourg followed by Finland and Romania.

This article forms part of the Culture statistics online publication. It focuses on two areas that link education with culture:

Universities and similar institutions provide tertiary education within the higher education sector. According to the international standard classification of education (ISCED), it is classified as ISCED levels 5 to 8.

The following fields are considered to be culture-related:

Tertiary students – more than 2.5 million studying in culture-related fields across the EU in 2020 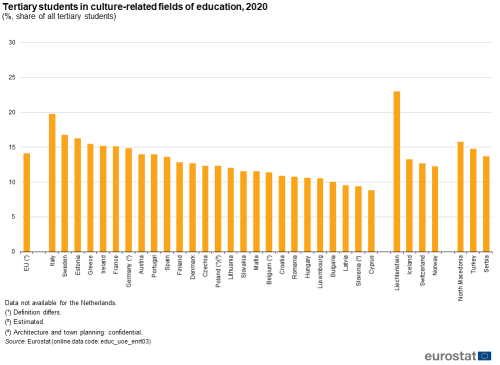 In most EU Member States, the highest number of students in culture-related tertiary education followed a degree in the humanities and languages

The highest shares of tertiary students in culture-related fields following journalism and information studies were reported in Slovakia (27.0 %) and Croatia (16.1 %), while the highest share for town planning and architecture was reported in Austria (18.1 %). 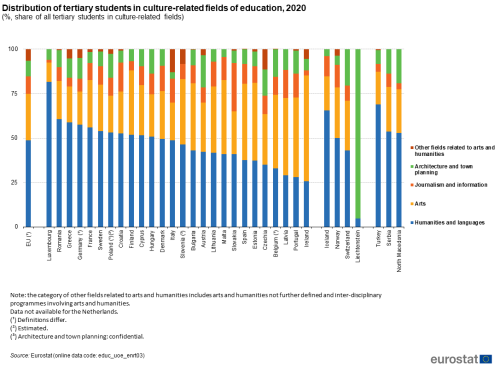 In 2020, there were more female than male tertiary education students in the EU studying culture-related fields, with women accounting for 63.9 % of the total (see Figure 3). The share of women was slightly higher among those studying journalism and information studies (67.5 %) and humanities and languages (66.9 %), while the gap between the sexes was much less pronounced for those studying architecture and town planning – here women accounted for 54.7 % of all students.

In 2020, secondary school pupils in Luxembourg and Romania were taught at least two foreign languages on average

The average number of foreign languages learnt by pupils in upper secondary general education (ISCED level 3) peaked at 3.1 in Luxembourg. It was higher than 2.0 in the Flemish Community of Belgium, Finland, Estonia and France. By contrast, Greek pupils in upper secondary general education were studying just 0.7 foreign languages on average. 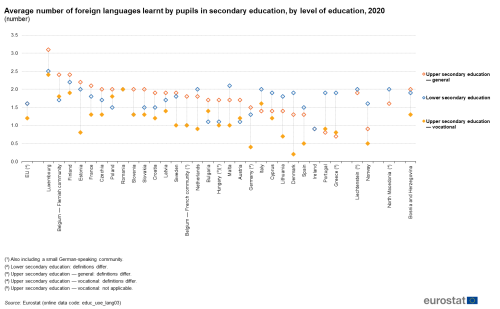 In 2020, in most EU Member States more than 90 % of pupils in upper secondary general education were learning English as a foreign language. The exceptions – where this share was less than 90 % – were Hungary (89 %), Denmark (78 %), Greece (65 %) and Portugal (62 %). All pupils in the Flemish Community of Belgium in upper secondary general education learnt English and French (French is considered a foreign language in the Flemish Community). In Luxembourg (with three official languages – Luxembourgish, French and German), all pupils learnt English and French, and 99 % of them learnt German. 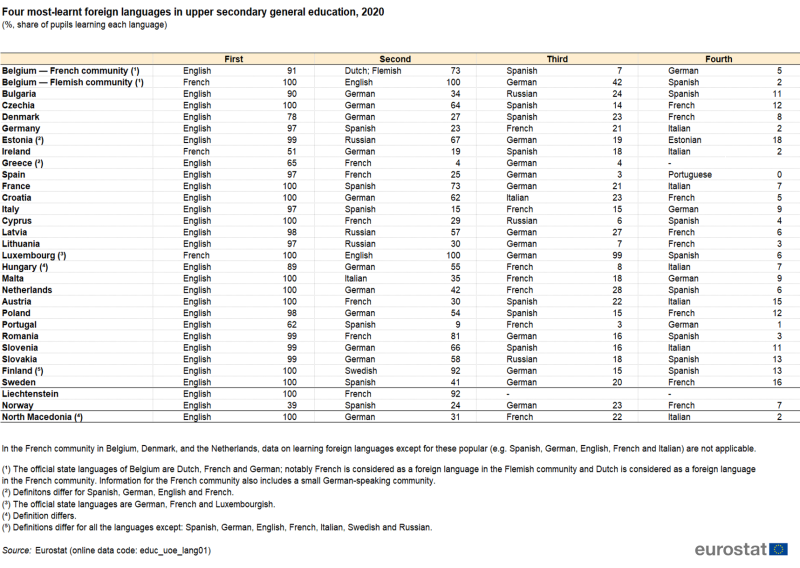 The education statistics presented in this article draw principally on a joint exercise run by UNESCO, the OECD and Eurostat known as the UOE data collection. It provides annual statistics on the participation in and the completion of education programmes by pupils and students, as well as data on education staff and education spending.

Levels of education are classified by ISCED 2011 as follows:

ISCED also classifies fields of education and training (ISCED-F 2013). Within this classification, four main fields have been identified as being related to culture:

Culture is one of Europe’s greatest assets: it is a source of values, identity and a sense of belonging. It also contributes towards well-being, social cohesion and inclusion. The cultural and creative sectors also provide a stimulus for economic growth, job creation and international trade.

This is why culture is becoming more important in the EU. In line with Article 167 of the Treaty of Lisbon, the EU ‘shall contribute to the flowering of the cultures of the Member States, while respecting their national and regional diversity and at the same time bringing the common heritage to the fore’.

The production of reliable, comparable and up-to-date cultural statistics, which provide a basis for sound cultural policymaking, is a cross-sectoral priority in the latest work plans. Eurostat compiles culture statistics from several different data collections to provide policymakers and other users with information on the main developments in the field of culture, covering issues such as education, employment, business, international trade, and participation and consumption patterns.