1.46 million students from abroad were undertaking tertiary level studies across the EU in 2020.

More than two fifths (43 %) of the students from abroad who were undertaking tertiary level studies across the EU in 2020 were from Europe, 26 % were from Asia and 16 % were from Africa. 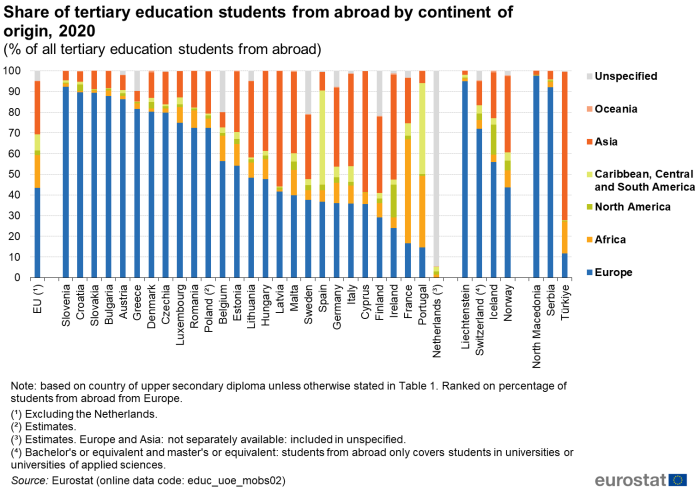 Tertiary students are degree mobile if they completed secondary education somewhere (regardless of whether this was in another EU Member State or in a non-member country) other than the EU Member State where they are studying. They are credit mobile if they spend a short-term study or work-related time abroad while being enrolled in their home country’s tertiary institution. The first part of the analysis focuses on tertiary students, the second part on tertiary graduates, followed by an analysis comparing the number of students with the number of graduates. The article concludes with a presentation of data on credit mobile graduates.

There were 1.46 million students from abroad who were undertaking tertiary level studies across the EU in 2020. As is the case for all students, not just those from abroad, the highest shares of these students were studying for either a bachelor’s degree (42.2 %) or a master’s degree (45.1 %), while 10.4 % were studying for doctoral degrees and 2.4 % followed short-cycle tertiary courses. 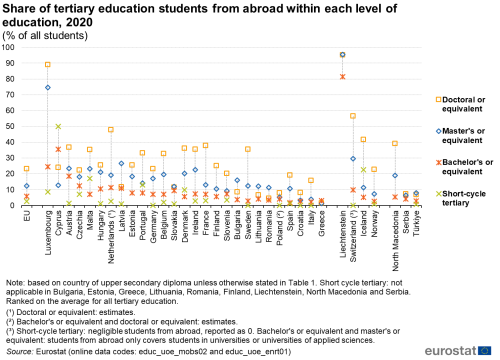 Figure 1: Share of tertiary education students from abroad within each level of education, 2020
(% of all students)
Source: Eurostat (educ_uoe_mobs02) and (educ_uoe_enrt01)

Figure 1 provides a more detailed analysis of the share of students from abroad in each stage of tertiary education in 2020, ranked on the share for the whole of tertiary education. In relation to the total number of students at each level, the share of students from abroad generally increases as a function of the level of education, from relatively low shares for short-cycle tertiary courses to much higher shares for doctoral degrees. For the EU as a whole, the shares in 2020 ranged from 2.6 % for short-cycle tertiary courses to 23.3 % for doctoral degrees.

Within each education level, some of the smaller EU Member States recorded particularly high shares of tertiary students from abroad in 2020.

Origin of students from abroad 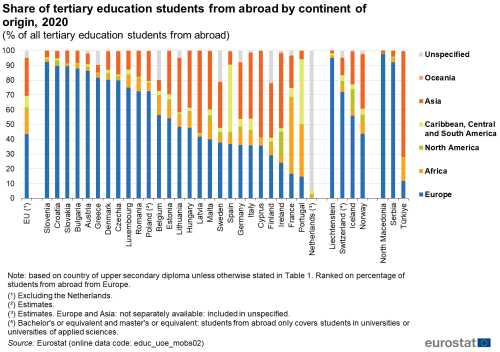 Figure 2 reflects how factors like language, cultural and historical ties, and geographical proximity can influence learning mobility, while the establishment of the European higher education area may also be an influencing factor on mobility. 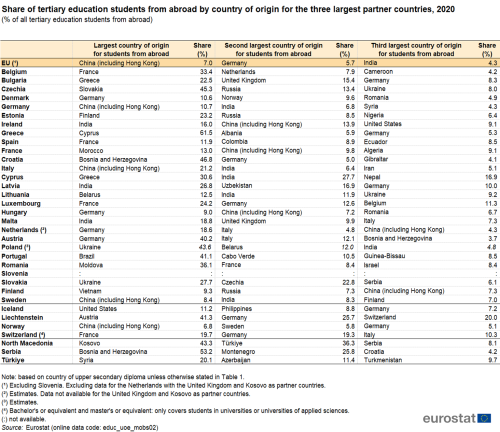 Across the whole of the EU, China (including Hong Kong) was the most common country of origin for tertiary students from abroad in 2020, accounting for 7.0 % of the total. There were more students from China (than any other foreign country) studying in Germany, Italy and Sweden, while Chinese students accounted for the second or third largest population of foreign students within the tertiary education sectors of five other EU Member States. The only other non-member countries that appeared multiple times in the rankings were India and several countries neighbouring the EU – Belarus, Bosnia and Herzegovina, Russia, Ukraine and the United Kingdom.

There were 327 600 tertiary students from abroad that graduated in the EU during 2020. The largest share wase graduates from master’s degree courses (47.5 %), while more than one third (37.4 %) graduated from bachelor’s degree courses, 5.5 % from doctoral courses and 2.0 % from short-cycle tertiary courses. 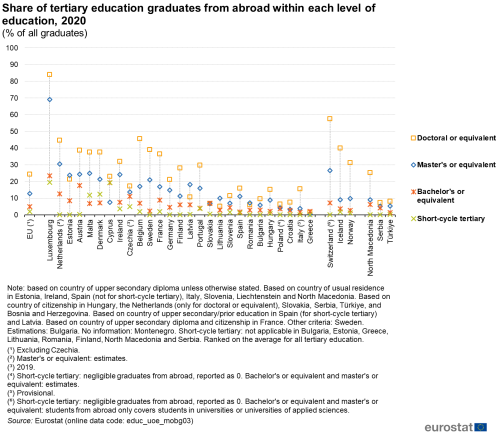 Figure 3: Share of tertiary education graduates from abroad within each level of education, 2020
(% of all graduates)
Source: Eurostat (educ_uoe_mobg03) 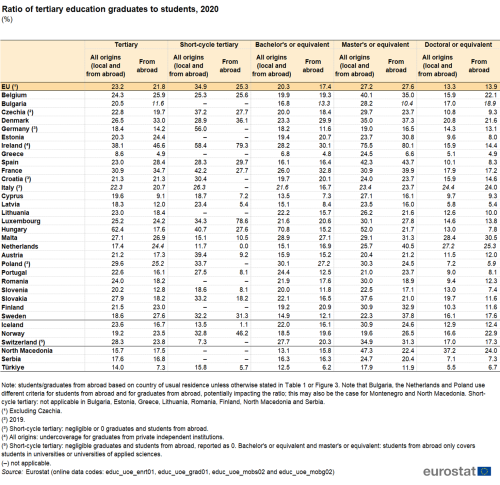 The ratio of graduates from abroad to students from abroad in the EU (excluding Czechia) for short-cycle degrees was 25.3 % in 2020, while the ratio for master’s degrees was slightly higher, at 27.6 %. Both of these ratios are relatively high, reflecting the short length of most courses; master’s degrees typically last one or two years (if taken after having already obtained a bachelor’s degree). Considerably lower ratios were recorded for doctoral degrees (13.9 %) and for bachelor’s degrees (17.4 %), where it is typical for students to spend at least three years researching or studying before they graduate. 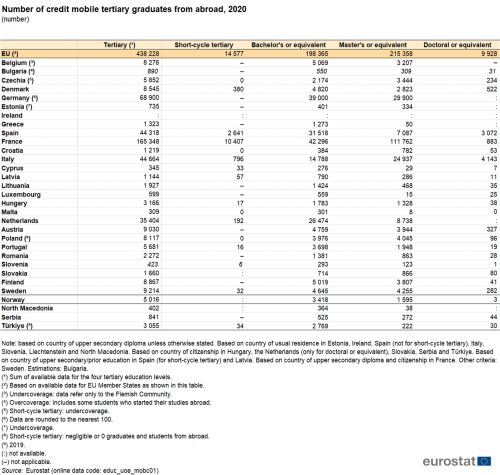 The previous sections of this article have focused on degree mobile students and graduates – students from abroad enrolled as a regular student with the intention of graduating from the course/study in the country of destination. The last section of this article concerns credit mobile graduates. Credit mobility is defined as temporary tertiary education or/and study-related traineeship abroad within the framework of enrolment in a tertiary education programme at a home institution (usually) for the purpose of gaining academic credit. The analysis concerns credit mobile students who were mobile for either a period of study or for a work placement, or both combined. 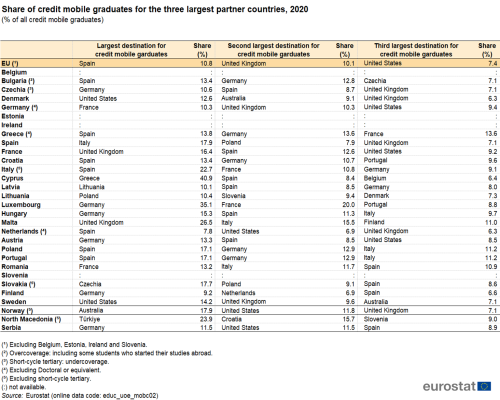 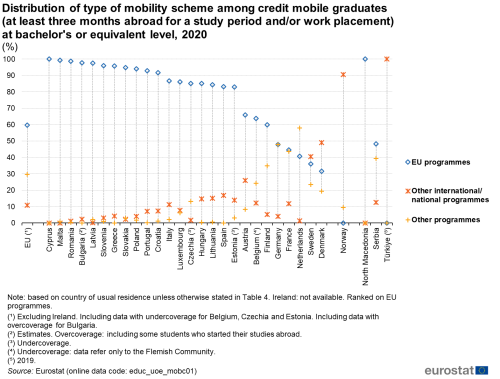 The final analysis in this article also concerns credit mobile graduates but focuses on people who had graduated from bachelor’s or equivalent programmes.

Data are presented for three types of credit mobility programmes in Figure 4:

Around three fifths of EU credit mobile graduates from bachelor’s or equivalent programmes in 2020 had participated in EU programmes (59.6 %). Other international/national programmes had a share of 10.8 %, while other programmes made up the remaining 29.6 %.

The UOE data collection covers domestic educational activity. In other words, it concerns education provided within a country’s own territory regardless of ownership or sponsorship of the institutions concerned (whether public or private, national or foreign) or of the education delivery mechanism (whether face-to-face or at a distance). In particular, all students studying within a country, including internationally mobile students from abroad, should be included in the statistics of the reporting country. Students who have left the reporting country to study abroad should not be included by the reporting country even where such students are partially or fully funded by national or subnational authorities. Concerning short exchange programmes (of at least three months but shorter than one academic year), students who remain enrolled in their home institution and where credits for successful completion of the study abroad are awarded by the home institution should be reported by the country of the home institution in which they are enrolled.

By contrast, educational activities which take place abroad – for example, in institutions run by providers located in the reporting country – should be excluded.

More information on the concepts used for these statistics can be found in the Methodological manual on learning mobility in tertiary education.

Since the introduction of the Bologna process (see the article on Education and training statistics introduced) a major expansion in higher education systems has taken place, accompanied by significant reforms in degree structures and quality assurance systems.

One of the operational goals of the Bologna process was to remove obstacles to student mobility across Europe, and more broadly support the mobility of students, teachers and researchers. It established a European Higher Education Area to facilitate student and staff mobility, to make higher education more inclusive and accessible, and to make higher education in Europe more attractive and competitive worldwide.

In 2014, the Erasmus programme was superseded by the EU’s programme for education, training, youth and sport, referred to as ‘Erasmus+’. The programme currently covers the period 2021–2027 and has an overall budget of €26.2 billion. This is nearly double the funding compared to its predecessor programme (2014–2020).

In the field of higher education, Erasmus+ gives students and academic staff the opportunity to develop their skills and boost their employment prospects. Students can study abroad for up to 12 months (during each cycle of tertiary education). The programme currently covers all EU Member States, as well as Iceland, Liechtenstein, Norway, North Macedonia, Serbia and Türkiye.