Archive:Land cover and land use statistics at regional level

This Statistics Explained article is outdated and has been archived - for recent articles on environment see here.

Eurostat has drawn up land use and land cover statistics to NUTS level 2 on the basis of the data collected on these points. The LUCAS microdata for each single point are freely available on the Eurostat website. 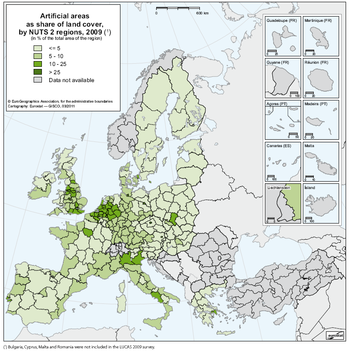 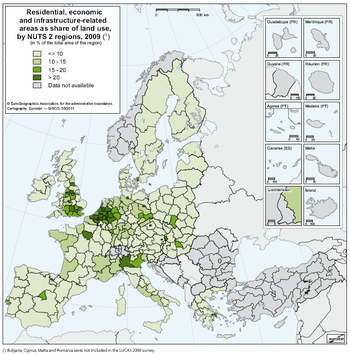 Map 2: Residential, economic and infrastructure-related areas as share of land use, by NUTS 2 regions, 2009 (in % of the total area of the region) - Source: Eurostat (lan_lu_ovw) 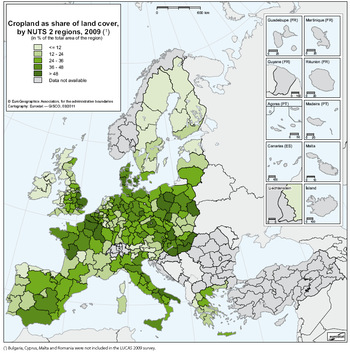 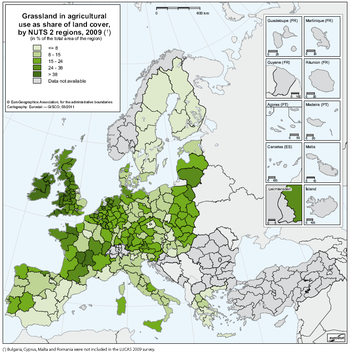 Map 4: Grassland in agricultural use as share of land cover, by NUTS 2 regions, 2009 (in % of the total area of the region) - Source: Eurostat (lan_lcv_grs) 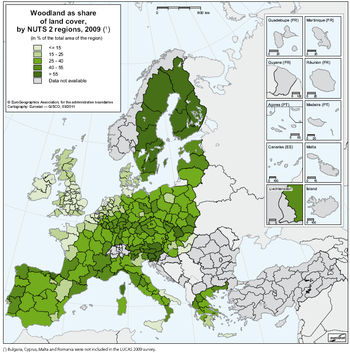 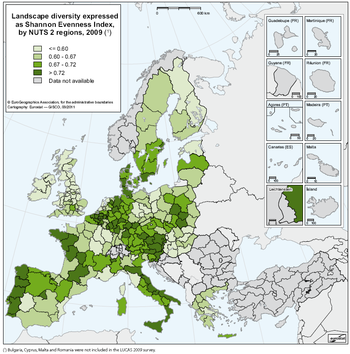 Most biological and human activities are land-based. Land is accounted for in two ways: as biogeographical land cover and as socioeconomic land use. Land cover indicates the visible surface of land (e.g. crops, grass, water, broad-leaved forest or built-up area). Land use indicates the socioeconomic purpose for which the land is used (e.g. agriculture, forestry, recreation or residential use). Data on land cover and land use are essential for observing and managing a range of key environmental and socioeconomic trends, many of which are linked to the sustainable use of resources and climate change.

In one of its land data collection systems, Eurostat collects land cover and land use data in the field through an area frame survey called LUCAS. It was launched in spring/autumn 2009 simultaneously in 23 EU countries. Bulgaria, Cyprus, Malta and Romania were not covered by the 2009 survey. Field surveyors visited the identified points and collected information on land cover, land use and selected agroenvironmental indicators for 234 700 points distributed among 23 Member States. Landscape diversity was recorded along a 250 m-long line eastwards from each point (the LUCAS transect). Each visit was documented by numerous photographs, which form an important part of the LUCAS dataset, especially in terms of landscape description.

Many large city regions such as Greater Manchester, Praha, Bremen, Wien, Berlin and Hamburg have between 25 % and 45 % of their land covered by buildings and surfaced areas. These cities appear very compact because NUTS 2 regions are defined as a relatively small area around the city itself, unlike in many other metropolises such as Paris. The actual urban structure also appears to be quite dense.

Outside the large urban agglomerations, the most densely built-up regions are located in the Benelux countries, southern and central England, the Ruhr area in Germany, Attiki in Greece, Northern Italy and Île de France. All these regions have long industrial traditions or include a metropolis with a large number of inhabitants. This has paved the way for dense urbanisation, which is reflected in the high share of artificial areas. Another clearly visible trend is that coastal regions, even at NUTS level 2, are more densely built up and have more transport networks than areas inland, particularly in Spain and France.

The other extreme is northern Finland, Sweden and the Highlands and Islands in Scotland. In these parts of Europe, the share of artificial cover is below 1 % of all land. The Baltic States and large parts of ex-socialist countries in central and eastern Europe are also predominantly rural and sparsely populated.

More than 8.8 % of EU land used for residential, commercial and industrial purposes

An analysis of the socioeconomic use of land gives a more dynamic view. Map 2 shows the distribution of industrial, service and infrastructure-related areas and residential land in Europe, with the exclusion of recreational, leisure and sport-related areas.

The most intensively used areas for these purposes are London (89.4 % in Inner London, 72.1 % in Outer London), Région de Bruxelles-Capitale/Brussels Hoofdstedelijk Gewest, Greater Manchester, Praha, Bremen, Wien, Berlin and Hamburg, all of which have over 40 % of the land used for residential, commercial and industrial purposes.

Map 3 shows the share of land covered by cultivated areas [1] in the 23 EU Member States. Cropland represents more than an eighth of the total area in most parts of Europe (although with different concentrations), with the only exceptions being very remote areas (northern regions in Finland, Sweden, United Kingdom and Ireland), large cities and mountainous areas.

The largest share of cultivated areas (between 45 % and 68 % of the NUTS 2 regions) is in regions of eastern and central European countries, such as Hungary, the Czech Republic and Poland, where very large collective farming is still practised, in northern parts of France (Picardie, Nord- Pas-de-Calais, Haute- and Basse-Normandie and Poitou-Charentes), eastern England, some regions of Germany (Leipzig, Sachsen-Anhalt, Hannover), Puglia and Sicilia in Italy and Denmark. All these regions have fertile lands and a long tradition of agriculture, which explains the significant share of croplands.

Map 4 shows the grasslands used for agricultural purposes. They are mainly concentrated in regions with less fertile soils and where forests have been either cut during the past centuries to fuel economic growth or disappeared due to climate factors. This is the case in Ireland, most of the United Kingdom (except eastern parts) and the Netherlands. Grassland used for agricultural purposes directly reflects the intensity of livestock farming. In France, the cheese and meat-producing regions of Auvergne and Limousin are very heavily dominated by grassland.

Areas with a relatively low share of grassland in agricultural use are located in harsher climate conditions, some in northern and others in southern Europe. In Greece and in eastern and southern Spain (Andalucía, Comunidad Valenciana, Cataluña and Région de Murcia), the climate is too arid for natural grasslands. The land is dominated more by shrubs. Finland and Sweden have very few agricultural grasslands.

Woodlands are the most common land cover type in Europe with a 39 % share, covering over 15 % of the land in most regions of Europe (Map 5). The few exceptions (less than a seventh woodland) include Ireland, most parts of England, coastal areas of the Netherlands and Belgium, Puglia and Sicilia in Italy, the island of Kriti in Greece, the north-west costal regions of France (Pays de la Loire, Basse-Normandie and Nord - Pas-de-Calais) and the Hamburg and Schleswig-Holstein regions in northern Germany.

In most regions in Finland, Sweden and Slovenia, more than 50 % of land is covered by woodland. The Baltic States are also dominated by forests. Large forest areas are a typical landscape feature in northern Europe and mountainous regions are usually covered by woodland. Typical examples are all regions in the Alps (France, Germany, Austria and Slovenia), the mountains in Greece, the Apennines (Italy), Pyrénées (Spain and France) and the Ardennes (Belgium). Central and south-western parts of Germany and most of Portugal are also rich in woodland.

Landscape is composed of the terrain, the land cover texture and visible features, such as trees and buildings. Giving a definition of landscape that describes its status and changes is a challenging task. Landscape is not only a mixture of the above elements but it also stems from perceptions and is scale dependent. The LUCAS data enable regional-level comparisons to be made of specific aspects of the landscape. One is the degree of variation of land cover types. This can be measured by the number of different land cover categories in the LUCAS 250 m transect and summarised using the Shannon evenness index (SEI).

As Map 6 shows, areas with high diversity are generally found in countries with mountainous or hilly areas. Slovenia, Portugal, Austria, Italy and Luxembourg score highly on land cover variance measured by the SEI. Relatively homogeneous countries, which have a strong dominance of one land cover type, typically have a low SEI value in landscape diversity. Examples are the United Kingdom and Ireland, which are dominated by grasslands, and Finland and Estonia, which are covered largely by woodlands. Countries close to the EU average value of SEI (Germany, Spain, France and Poland) have a balanced mixture with no clear dominant land cover type.

The SEI computed at NUTS level 2 shows that four out of five regions in Portugal rank amongst the top 25 %, as do three out of five Danish regions, six out of nine Austrian regions and eight out of the 11 Belgian regions. In Denmark and Belgium, land cover patches (particularly cropland) seem to be smaller than the European average and they often alternate with other types of land cover. This gives high landscape diversity in these regions. Italy and France are crossed from north to south by a strip of regions with a highly diverse landscape. In Italy, the line mainly follows the Apennine Mountains. In France, a combination of reasons seems to underpin landscape diversity in western regions. In the north (Bretagne), rather diverse land use leads to analogous diversity in the landscape. In the south (Midi-Pyrénées), diversity is more directly linked to the orography of the land.

At the lower (25 %) end of the distribution of the SEI are the Irish regions and 24 of the 37 regions of the United Kingdom, six of which are among the 10 EU regions with the lowest SEI value.

Some conclusions can be drawn from analysing land cover, land use and landscape indicators in this chapter:

The LUCAS Survey 2009, a multipurpose platform for land cover and land use.

The LUCAS (Land Use/Cover Statistical Area Frame Survey) survey is a field survey based on an area-frame sampling scheme. Data on land cover and land use are collected and landscape photographs are taken to detect any changes to land cover/use or to European landscapes. Moreover, the transect, a 250 m walk along which linear elements and land cover changes are recorded, is used in the landscape analysis.

Eurostat carried out a large LUCAS campaign in 2009, covering 23 countries (EU-27 minus Bulgaria, Cyprus, Malta and Romania). It collected data on the ground on land cover, land use and landscape diversity at approximately 234 700 points[2]. These points were selected from a standard 2 km grid with in total 1 million points all over the EU. The land cover and the visible land use data were classified according to the harmonised LUCAS land cover and land use nomenclatures. The resulting dataset is unique as it is fully harmonised and comparable with the same definitions and methodology among Member States.

These data were published for the first time by Eurostat, the statistical office of the European Union, and are freely available to users.

More detailed information can be found on the Eurostat website.

Land is the basis for most biological and human activities on the earth. Agriculture, forestry, industries, transport, housing and other services all use land as a natural and/or an economic resource. Land is also an integral part of ecosystems and indispensable for biodiversity, carbon cycle, etc. Therefore harmonised and reliable data and information on land cover/use status and changes are crucial for various policy sectors and stakeholders.

The LUCAS survey is part of the Eurostat work programme. The next survey will take place in 2012.