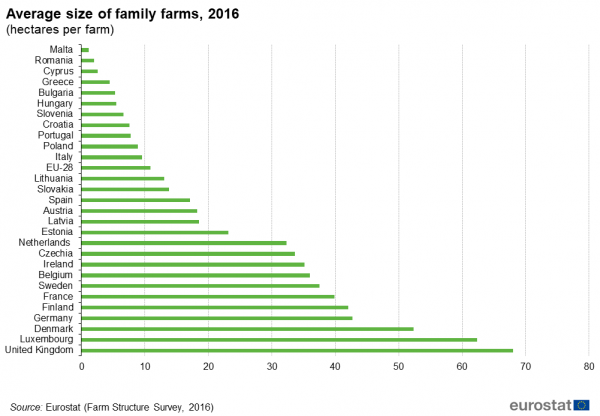 The United Nations’ Food and Agriculture Organisation (FAO) defines a family farm as ‘… an agricultural holding which is managed and operated by a household and where farm labour is largely supplied by that household’. Family farms are by far the most common type of farm in the European Union (EU), encompassing a wide range of agricultural holdings (hereafter referred to as farms): from small, semi-subsistence farms with only family workers and farms which have to rely on other gainful activities for a diversified source of income, through to much larger, more productive farms which nevertheless are mostly managed by family members.

Structural profile of farms - analysis for the EU

Family farms dominate the structure of EU agriculture in terms of their numbers, their contribution to agricultural employment and, to a lesser degree, the area of land that they cultivate and the value of the output they generate. There were 10.5 million farms in the EU in 2016, with the vast majority of them (95.2 %) classified as family farms.

Across all the farms in the EU-28, family farms used 81.4 % of the regular agricultural labour force.

… but farmed a little less than two thirds of the total area of agricultural land cultivated. 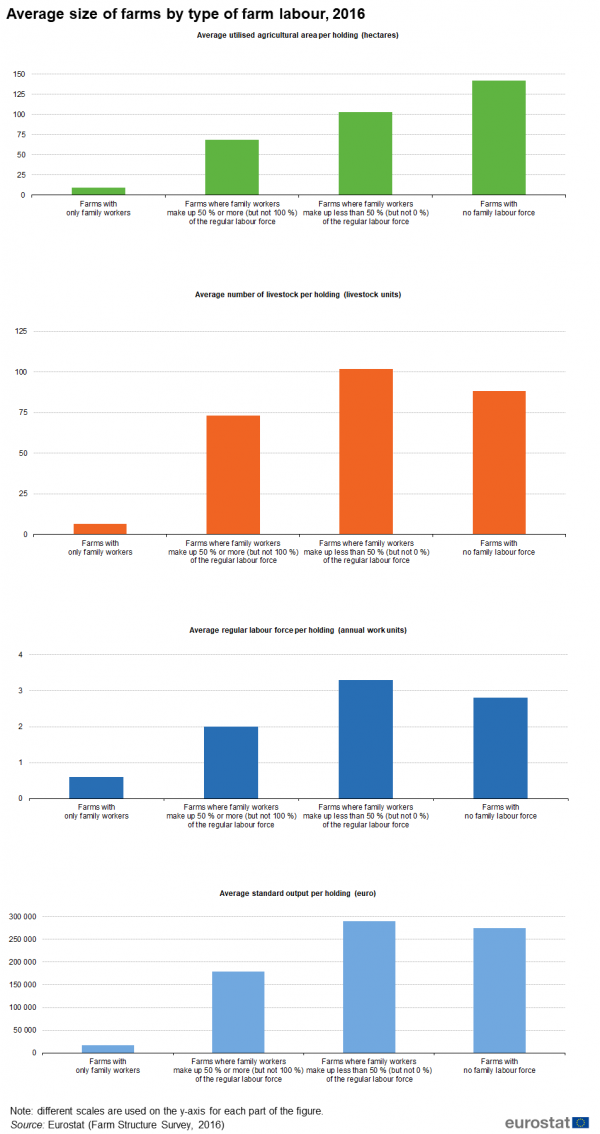 In terms of average economic size, average number of workers and average number of livestock units (in order to facilitate the comparison of livestock data, the different species are converted into livestock units), family farms were also consistently smaller than non-family farms. However, in these cases, the class with the largest size was always the one where family workers made up less than 50 % (but not 0 %) of the regular labour force.

There were 9.9 million family farms in the EU-28 in 2016, of which about one third (3.4 million) were located in Romania (see Table 2). A combined one third of the EU total was also located in Poland (1.4 million), Italy (1.1 million) and Spain (0.8 million), the three Member States with the next highest number of family farms. 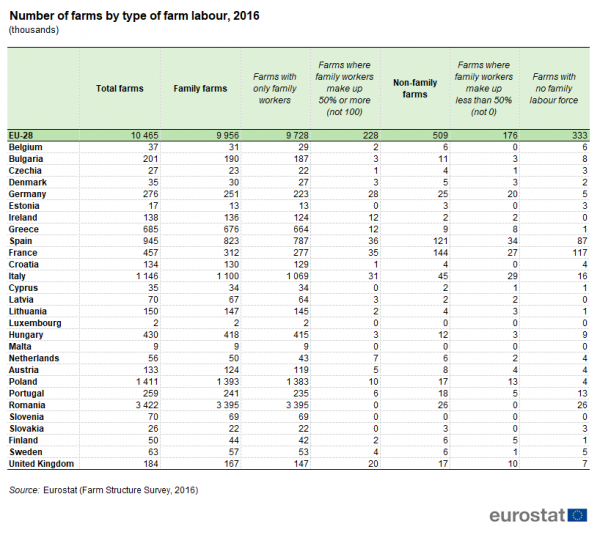 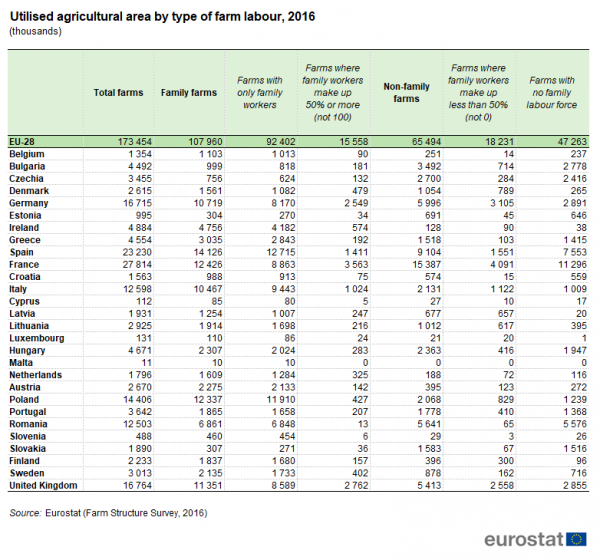 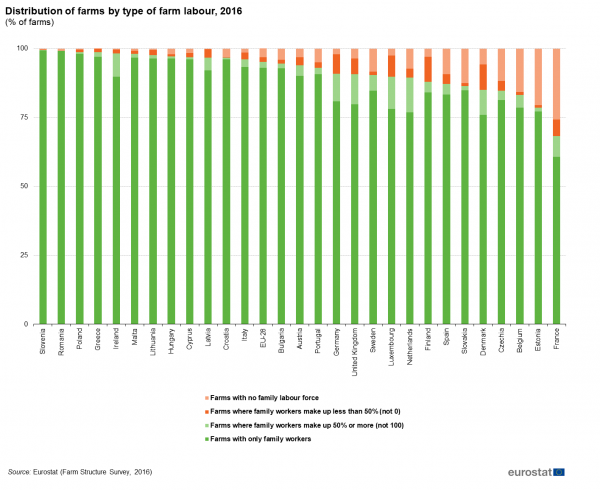 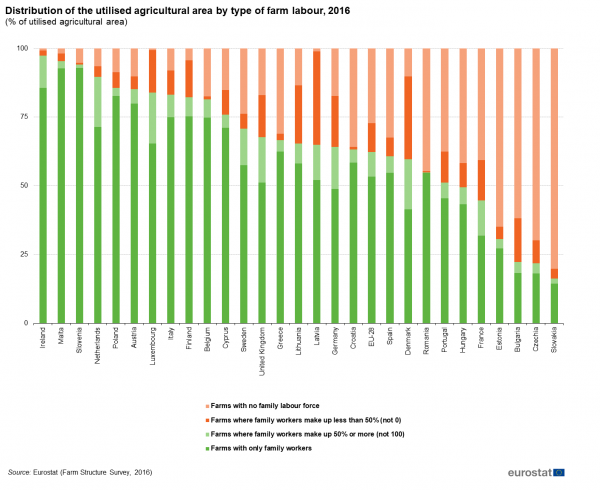 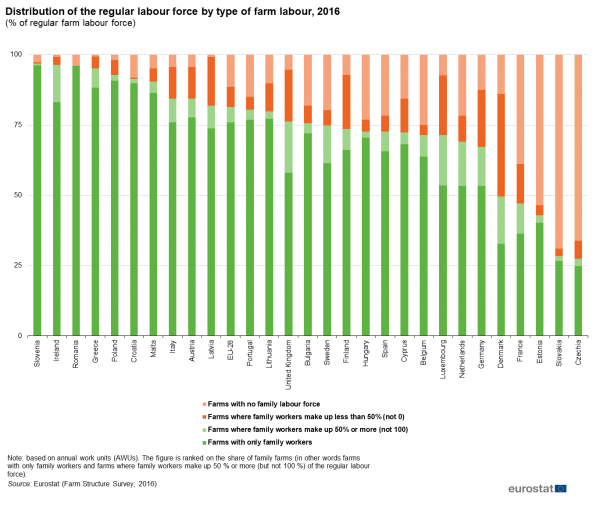 The livestock reared and output generated was higher than 50 % in around two thirds of the Member States.

Family farms reared more than 90 % of the livestock (measured in livestock units) in Ireland, Austria and Slovenia, well above the EU average (62.5 %). In contrast, this share was below 20 % in Slovakia, Czechia and Estonia (see Figure 6). 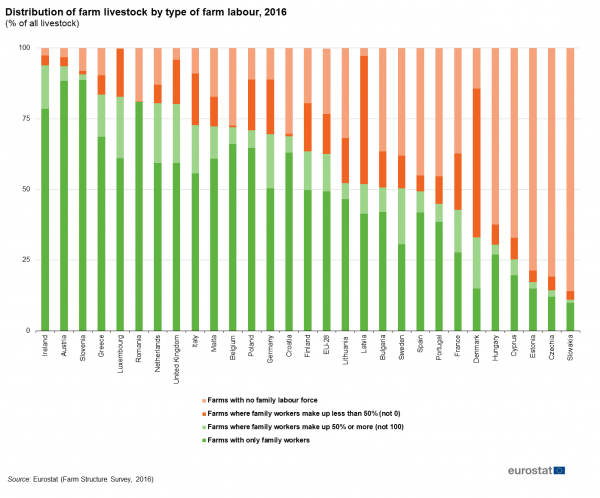 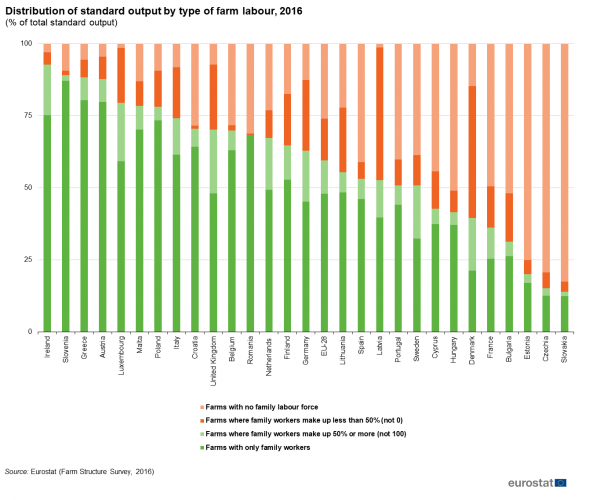 Almost one third of farm managers in the EU-28 were aged 65 years or over.

On farms with only family workers, the share of managers aged 65 or over (34.3 %) was much higher than in farms without any family labour (9.3 %). These figures suggest that farm managers working for corporations and cooperatives were much more likely to have stopped managing farms by the age of 65. 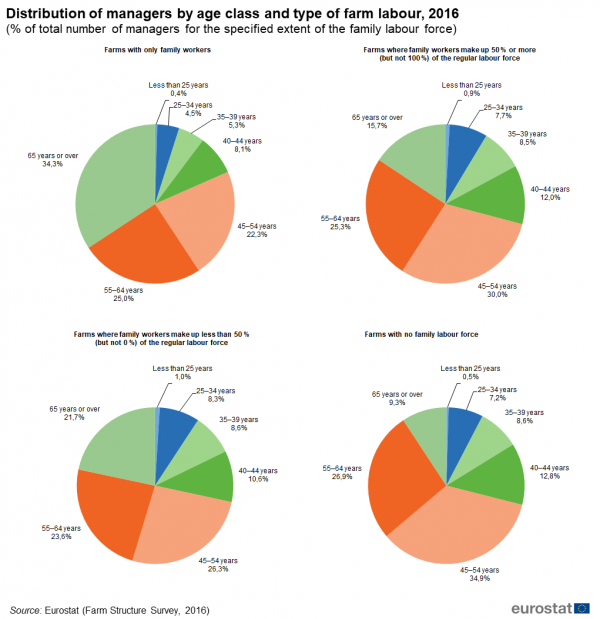 Figure 8: Distribution of managers by age class and type of farm labour, 2016
(% of total number of managers for the specified extent of the family labour force)
Source: Eurostat (Farm Structure Survey, 2016)

However, the percentage of managers aged between 55 and 64 accounted for around one quarter of the total managers in all types of farm.

There were relatively few young farm managers in the EU-28 in 2016 (see Table 4). Managers younger than 40 years old accounted for about 10 % of all managers on farms with only family workers, although this share rose to 17 % in non-family farms. 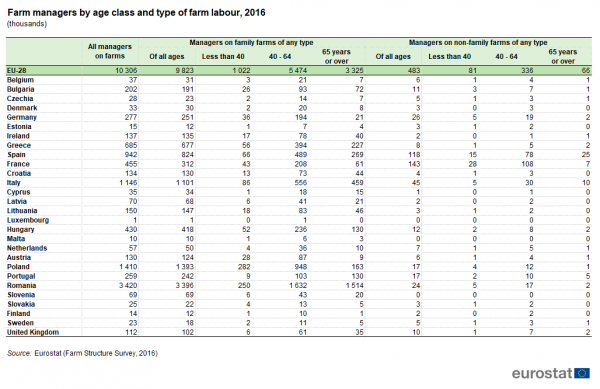 All the statistics for farms and farmers were drawn from the Farm Structure Survey for 2016.

Using data from the latest Farm Structure Survey, and applying the FAO definition for family farms at an operational level, it is possible to analyse farms on the basis of their labour input.

Family farms may be defined as:

By contrast, non-family farms are defined as:

Labour force data are provided in terms of a simple count of the number of persons as well as being converted into annual work units. Due to the high share of seasonal and part-time work in agriculture, it is generally considered appropriate to assess labour input using data presented in annual work units. One annual work unit corresponds to the work performed by one person who is occupied on a farm on a full-time basis for a full year. Full-time means the minimum hours required by the national provisions governing contracts of employment. If these provisions do not explicitly indicate the number of hours, then 1 800 hours are taken to be the minimum (225 working days of eight hours each).

Utilised agricultural area is the total area taken by arable land, permanent grassland, permanent crops and kitchen gardens used by the holding, regardless of the type of tenure or of whether it is used as a part of common land.

The FAO [[1]] declared 2014 to be the International year of family farming. As a follow-up to this initiative, the Family Farming Knowledge Platform was created. It gathers information on family farming from all over the world, including national laws and regulations, public policies, best practices, relevant data and statistics, research, articles and publications.

More recently, in 2017, the General Assembly of the United Nations adopted a resolution which proclaimed the United Nations Decade of Family Farming for the period 2019-2028. Its main objective is to support family farms through a Global Action Plan, which consists of seven pillars of work containing measures on a local and global level.

EU support to family farms through the common agricultural policy (CAP) has also been explicit in the period 2014–2020. The small farmers’ scheme has been part of the post-2013 CAP reforms, providing small farmers with the opportunity to reduce red tape and accept a one-off, lump-sum payment to replace all direct payments. The CAP reforms for 2014–2020 have also promoted greater integration with regional and structural funds. It includes the possibility for small family farmers to receive business start-up aid, with young farmers being eligible for a combination of measures including start-up grants, training and advisory services. All these efforts are designed to support the development of family farming, especially on a smaller (though commercial) scale.

According to FAO family farming preserves traditional food products, while contributing to a balanced diet and safeguarding the world’s agro-biodiversity and the sustainable use of natural resources. At the same time it also represents an opportunity to boost local economies, especially when combined with specific policies aimed at the social protection and well-being of communities.

The main challenges facing family farms often reflect issues that are common for all types of small business: access to resources (such as land and capital) or access to markets (particularly in relation to the bargaining power of small farms in the food chain). Demographics provide a social challenge for family farms, as inter-generational succession issues may impact upon the sustainability of family farming. This challenge is further complicated in some of the EU Member States by legislation over inheritance (which may influence land consolidation/fragmentation).