Highlights
Tweet
Agriculture remains a big employer within the EU; 9.7 million people worked in agriculture in 2016.
Tweet
There are few young farmers; only one in ten EU farm managers (11 %) were under the age of 40 years old in 2016.
Tweet
Farming is a male dominated profession, only 28 % of farmers being women in 2016. 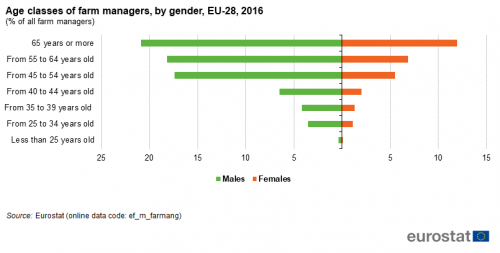 Knowing how many people are employed in agriculture is not as straightforward as it might seem and certainly not as easy as other sectors of the economy. This is explained by the fact that many farmers and farm workers pursue agriculture as a part-time activity, that many farms are family-run with family members providing help on the farm at different times of the year, and that there are seasonal peaks in labour (particularly when it comes to harvesting).

In this analysis, four distinctions are made: (i) agricultural employment (ii) the regular agricultural labour force (iii) the volume of agricultural work carried out and (iv) farm managers. Each of these sheds a light on a different aspect of those working in agriculture which can be important for policy purposes. Employment data covers employees and self-employed persons, but excludes many part-time farmers and help from family members; it is a measure that allows comparisons to be made across different sectors of the economy.

The regular agricultural labour force is the broadest category that includes even those that work part-time and provide free labour, which is common for many family members of the farmer. The amount of labour actually provided can be converted into full-time labour equivalents (called Annual Work Units) to get an idea of the volume of work carried out in agricultural activities. Farm managers can be thought of as decision-making farmers.

Agriculture remains a big employer within the EU; about 9.7 million people work in agriculture

People working in agriculture accounted for about 4.2 % of total employment in the EU in 2016 (see Figure 1), corresponding to 9.7 million persons. Agriculture is a particularly big employer in Romania, accounting for just less than one in every four persons (23.0 %) employed in the country, as well as in Bulgaria (17.5 % of total employment), Greece (10.7 %) and Poland (10.1 %). 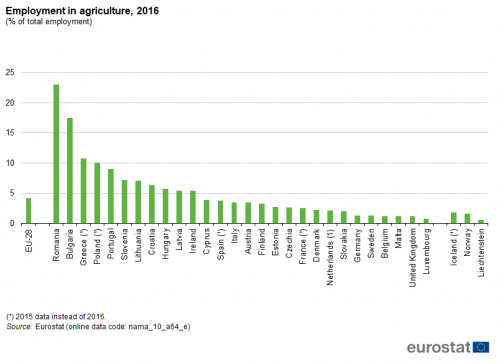 Nevertheless, many more people help out on farms without being employed by them. This helps explain why the EU's regular agricultural labour force is much higher, at 20.5 million people in 2016; for many of these people, farm work only represented a minor activity. Only a relatively small proportion of this regular workforce (17.0 %) worked full-time. Indeed, when converted into Annual Work Units (AWUs) that measure the volume of work carried out in terms of full-time labour equivalents, the agricultural labour force provided work that was equivalent to 9.5 million full-time workers, similar to the total number of people employed in agriculture. It is this measure of the volume of work that is used as the labour factor in partial labour productivity measures.

The gender imbalance among farmers is particularly strong in the Netherlands; only one in every twenty farmers (5.2 %) was female in 2016. Female farmers were also particularly uncommon in Malta (6.0 % of all farmers), Denmark (7.7 %) and Germany (9.6 %). There was a closer gender balance in Latvia and Lithuania (each had a 44.9 % share of farmers that were female).

Elderly farm managers tend to work on the smallest farms (measured in economic terms) which are characterised by subsistence households and low levels of agricultural income. Four-fifths (81.7 %) of the EU's farm managers that were 65 years of age or older worked on subsistence farms and very small farms in 2016 (see Figure 3). 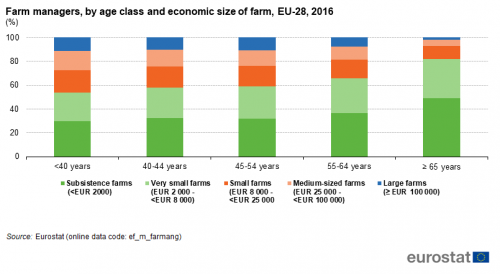 A higher share of young farmers managed medium and large-sized farms (27.5 %) than was the case in other age classes. Indeed, the share was progressively lower through each older class of farm manager, with only 7.0 % of farmers aged 65 years and older managing medium and large-sized farms. In part, this distinction might be explained by the fact that young farmers had higher levels of educational attainment in terms of full agricultural training (19.2 % vs 2.6 % for over 65 year olds) and had followed up-to-date professional training courses including those on new and innovative farming practices.

The regular agriculture labour force in the EU declined by 9.5 million persons between 2005 and 2016; this was a reduction of almost one third (-31.7 %). During this same period, the volume of work carried out by the EU's labour force in agricultural activities declined by 3.3 million AWUs, a decline of one quarter (-25.7 %). Just shy of three quarters (71.1 %) of these full-time equivalent job losses occurred in the Member States that joined the EU after May 2004. The biggest losses were in Romania (1.0 million AWUs), Poland (0.6 million AWUs) and Bulgaria (0.4 million AWUs, which represented a 60 % decline). 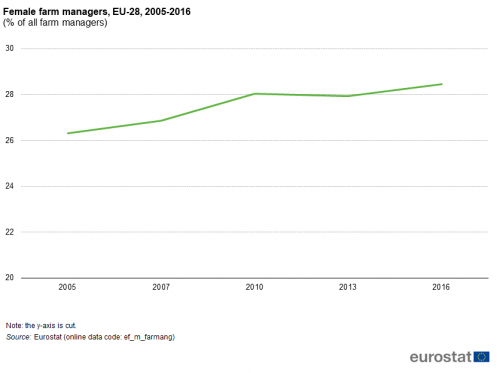