Excess mortality continued to vary across Member States in September 2021: from less than 4% in Belgium, Sweden and Hungary to over 50% in Bulgaria and 31.5% in Lithuania.

Excess mortality is expressed as the percentage rate of additional deaths in a month, compared to a “baseline” in a period not yet affected by the pandemic. The baseline adopted consists of the average number of deaths that occurred in each of the 12 months during the period 2016-2019. The higher the value, the higher the amount of additional deaths compared to the baseline. If the indicator is negative, it means that fewer deaths occurred in a particular month compared with the baseline period.

During the month of March 2020, the number of deaths rose rapidly in some European countries. In some parts of the EU, deaths were exceptionally high, when compared to the average mortality rate from the period 2016 to 2019. The COVID-19 pandemic affected every part of the EU; however, its impact was not evenly spread. The highest peaks of additional deaths, during the early increase in COVID-19 cases in March-April, were recorded initially in Italy and Spain, then France, Belgium and the Netherlands.

During the following period, May to July 2020, a lower level of excess mortality was registered on average. At the end of summer 2020, in August and September, another surge in excess mortality began, with the average indicator reaching 17 % in October and 40 % in November (the highest rate for the whole year), before a slight decrease in December (almost 30 %). The indicator rose in all Member States, this time with a geographical prevalence in eastern Europe (Poland, Bulgaria and Slovenia reached a 90% excess in November 2020). In 2020, the EU experienced two full cycles of excess mortality: the first between March and May 2020 (reaching 25 % excess rate in April), then a longer one between August 2020 and the end of the year (reaching a 40 % excess rate in November 2020).

In 2021, excess mortality reached a new peak in April (20.6 %) then decreased to 10.2 % in May and fell to a minimum of 5.1 % in July. During summer 2021, the downward trend reversed and the EU rate increased again to reach 8.2 % in August and 12.1 % in September, over the baseline period. When looking at national rates, the range of values varied considerably, highlighting some Member States (Bulgaria, Romania, Greece and Lithuania) which recorded excess mortality rates higher than 30 % in September. On the other hand, several other countries presented rates below 10 %, as we can see more in detail in the next paragraph and in Table 1. In September 2021, all EU Member States were above their baseline level, and the death trend was gradually worsening for most of them. 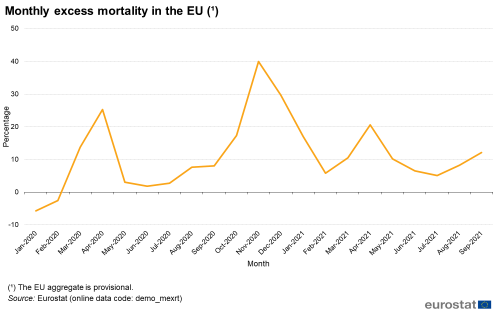 At the end of the year 2020, approximately 550 000 additional deaths were officially recorded in the EU, compared with the average in the period 2016-2019. Considering that January and February 2020 actually had a negative balance, from March to December 2020 the excess mortality reached more than 580 000 deaths.

The comparison of the number of deaths in 2020-2021 with data from the period 2016-2019 shows, at aggregate level, the exceptional situation in the first months of 2020 across the EU. While important disparities existed between countries and regions, the first two months of the year presented lower values than those observed in the previous years. However, while mortality normally starts declining at the beginning of March, in 2020 – on the contrary – the number of deaths started to rise sharply. In March, the values of 2020 exceeded those recorded on average in the previous years, and this gap was at its height in April 2020, while in the following month and in May there was a sharp decrease. Values for the summer period of 2020 showed a lower level of mortality, compared to the average of the previous period, but a new upward trend began again at the end of August and increased in October, reaching its peak in November at 40.0 %, the highest rate in 2020. This second wave continued until January 2021, and it was more geographically balanced than the first wave, with a prevalence of higher excess mortality rate in the eastern regions. 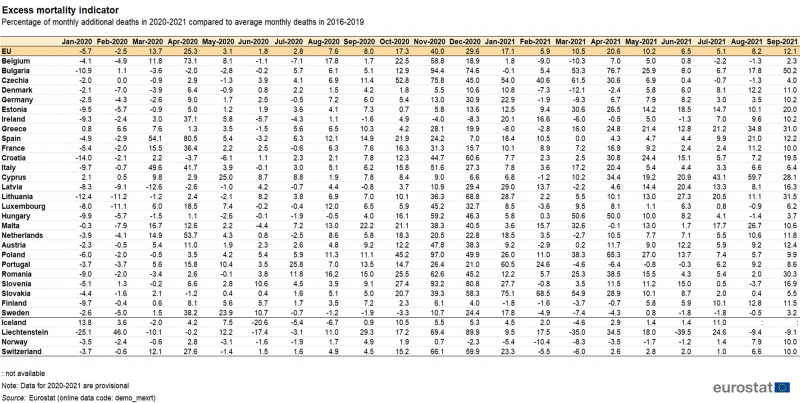 In May, June and July 2021, the overall number of deaths in the European Union declined further, reaching an overall rate of 5.1 % in July 2021, the lowest rate in the year since July 2020. In August and September 2021, while the overall rate increased again, excess mortality continued to vary considerably across the EU Member States, highlighting some Member States (Bulgaria, Romania, Greece and Lithuania) which recorded excess mortality rates higher than 30 % in September, with Bulgaria at 50 %, while others (Belgium, Czechia, Hungary, Italy, Luxembourg, Poland, Portugal, Slovakia, and Sweden) presented rates below 10 %.

‘Excess mortality’ has been identified as one of the most useful indicators for assessing additional deaths, complementing other regularly updated indicators of the European Statistical Recovery Dashboard. In order to capture the dynamics of mortality changes in a more comprehensive way, the excess mortality indicator is calculated for each month, no later than 45 days after the end of the reference period (depending on data available to Eurostat from the national statistical institutes). The indicator provides additional insight into the impact the crisis has had on European societies. It should be stressed again that, while a substantial increase largely coincides with a COVID-19 outbreak in each country, the indicator does not make a distinction between the causes of death and does not differentiate sex or age class. Statistics on excess deaths provide information about the burden of mortality potentially related to the COVID-19 pandemic, thereby covering not only deaths that are directly attributed to the virus but also those indirectly related to it. In addition to confirmed deaths, excess mortality captures COVID-19 deaths that were not correctly diagnosed and reported, as well as deaths from other causes that may be attributed to the overall crisis condition. It also accounts for the partial absence of deaths from other causes like accidents that did not occur due, for example, to the limitations in commuting or travel during the lockdown periods.