In 2017, 46.7 % of all graduates from vocational programmes in upper secondary education in the EU were female.

In 2015, 30.5 % of enterprises in the EU-28 with 10 or more persons employed had participants in initial vocational training.

Share of females among all graduates from vocational education programmes, 2017

The first section of this article looks at vocational education within secondary and post-secondary non-tertiary education, typically within educational institutions: generally this concerns initial education, before a person enters the labour market for the first time, although it may also include adult education. Within these education levels (which are covered by the international standard classification of education (ISCED) levels 2-4), vocational educational programmes are distinguished from general educational programmes, as they are specifically designed for pupils to acquire the knowledge, skills and competencies for a particular occupation or trade. 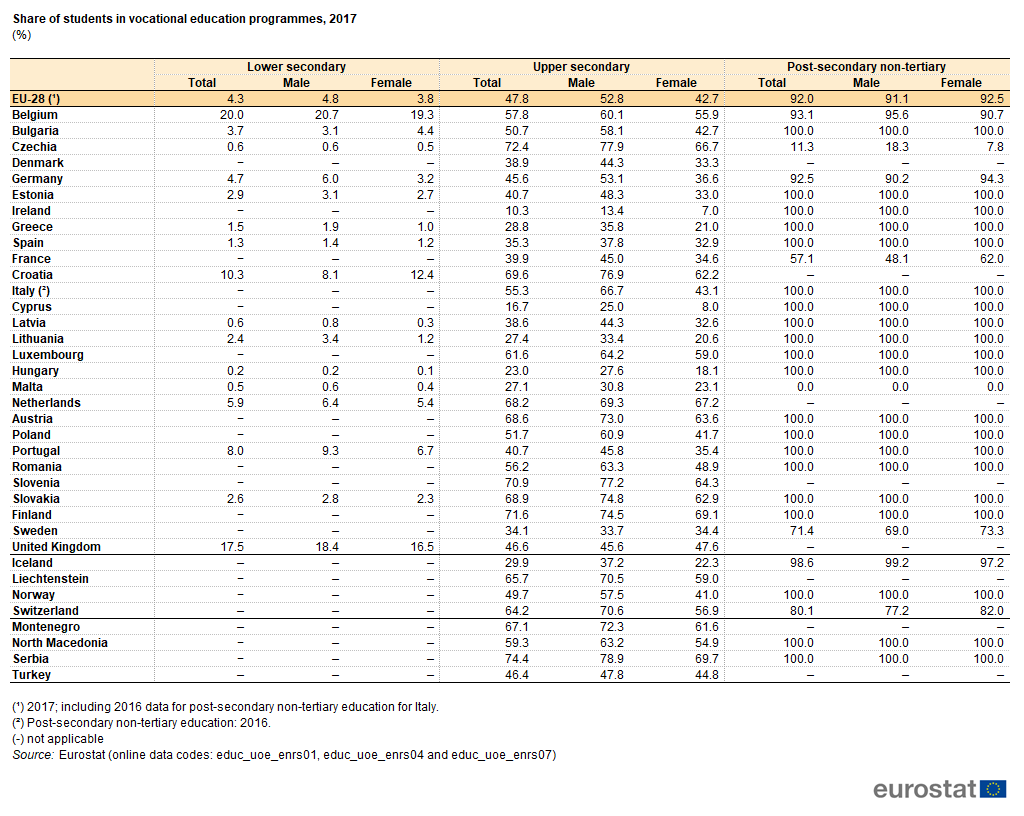 In 2017, typically between one third and one half of all graduates from upper secondary vocational programmes in the EU Member States were female, with this share averaging 46.7 % across the EU-28. The lowest share was 22.5 % in Cyprus while shares above 50.0 % were recorded in Denmark, the United Kingdom, Luxembourg, Finland and Ireland (where a peak of 61.4 % was registered).

A similar comparison for post-secondary non-tertiary graduates reveals a wider range between the EU Member States. In 2017, the share of female graduates from vocational programmes was around one fifth (19.3 %) in Luxembourg. By contrast, female graduates accounted for close to three quarters of all post-secondary non-tertiary graduates from vocational programmes in Austria (74.9 %) and Poland (75.5 %) and more than nine tenths (91.9 %) in Malta — see Figure 1. 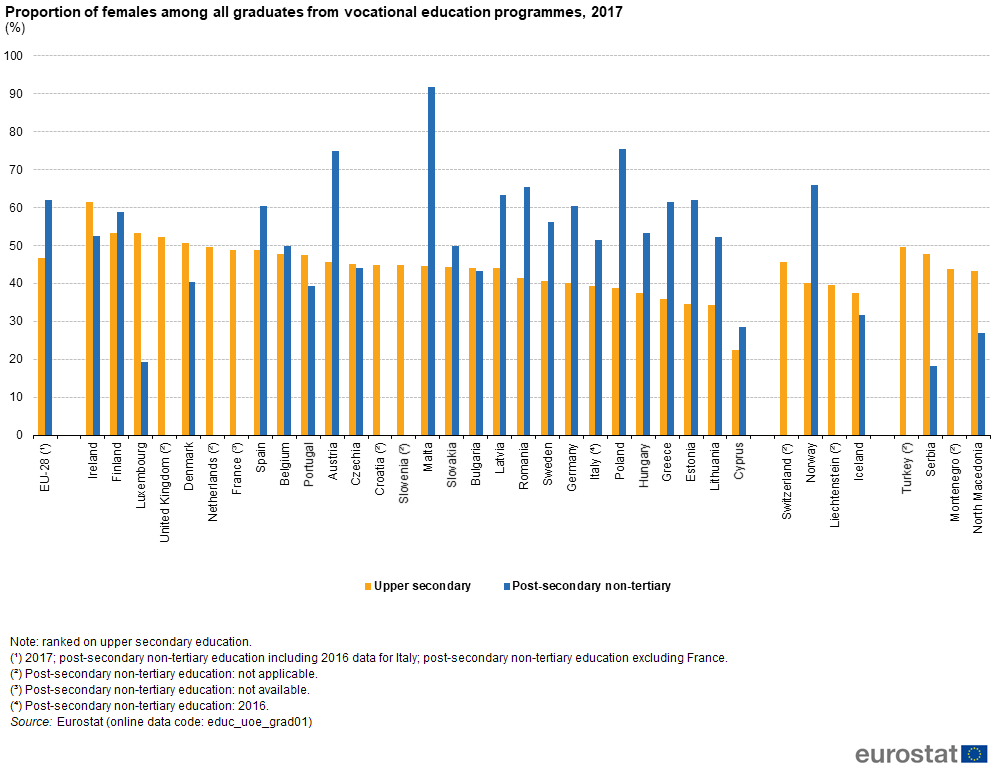 More information on graduates from secondary and post-secondary non-tertiary education is available in a separate article. 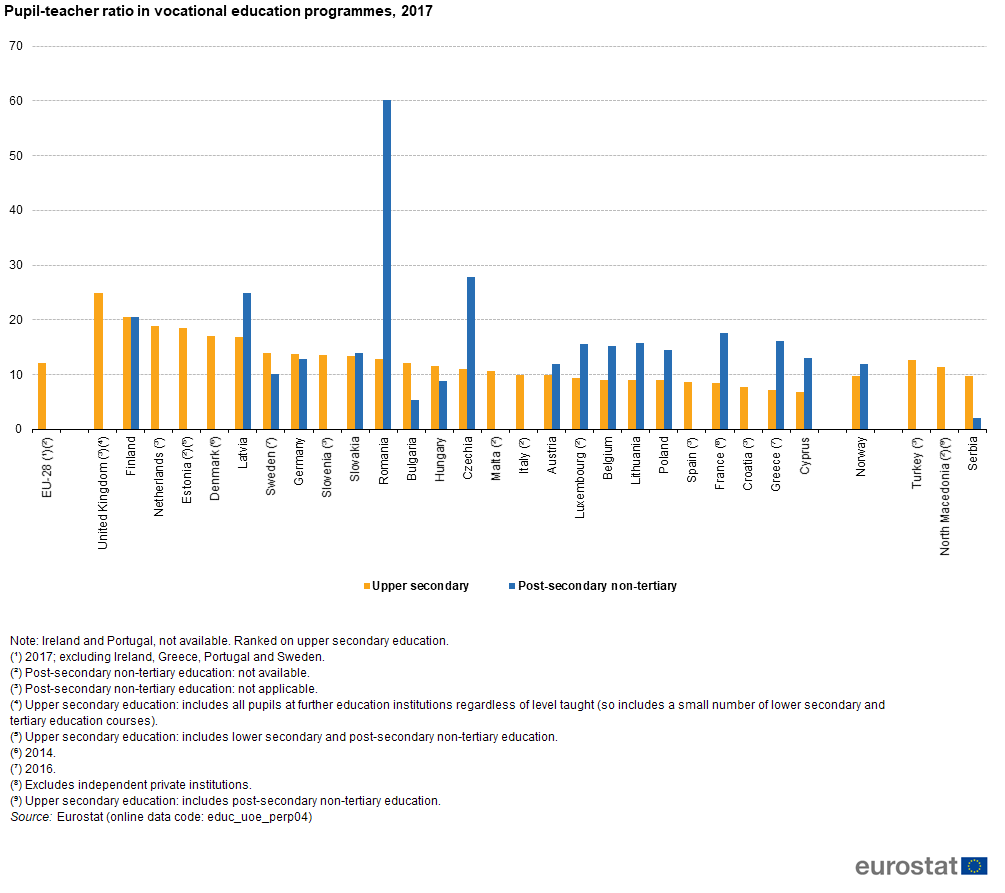 Although the data presented in Figure 3 are from the continuing vocational training survey (CVTS) they show the proportion of enterprises providing initial vocational training (IVT), rather than continuing vocational training (CVT); a detailed description of these terms is provided below in the key concepts section under Data sources. In 2015, almost one third (30.5 %) of all enterprises with 10 or more persons employed in the EU-28’s business economy provided IVT, although the proportion varied greatly across EU Member States. Only eight Member States reported a share that was above the EU-28 average (an identical share was recorded in the United Kingdom), with around a third of all enterprises in Italy, Slovenia, Slovakia, France and Denmark providing IVT, more than two fifths in Austria, around one half in the Netherlands, and more than three fifths in Germany. At the other end of the scale, less than 1 in 10 enterprises provided IVT in seven of the Member States, principally Member States that joined the EU in 2004 or 2007, but also Greece. 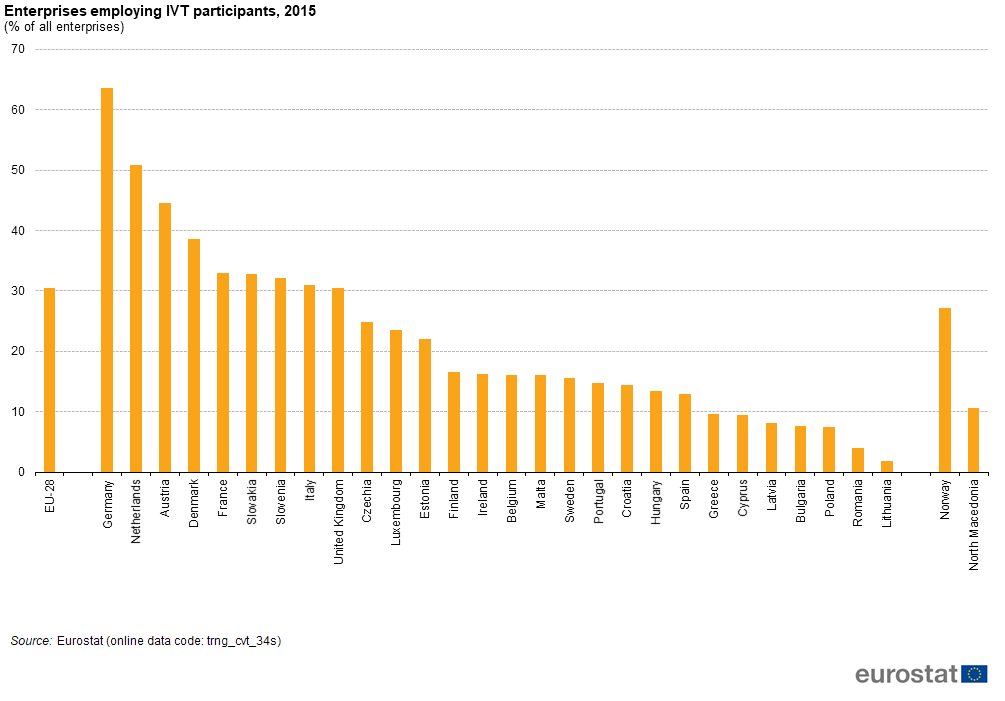 The remainder of this article focuses on data from the continuing vocational training survey and in particular on the provision of continuing vocational training (CVT) by enterprises. This information refers to education or training activities which are financed, at least in part, by enterprises; part financing could include, for example, the use of work time for the training activity. CVT can be provided either through dedicated courses or other forms of CVT, such as guided on-the-job training. In general, enterprises finance CVT in order to develop the competences and skills of the people they employ, hoping that this may contribute towards increasing competitiveness and productivity. A large majority of CVT is non-formal education or training, in other words, it is provided outside the formal education system. 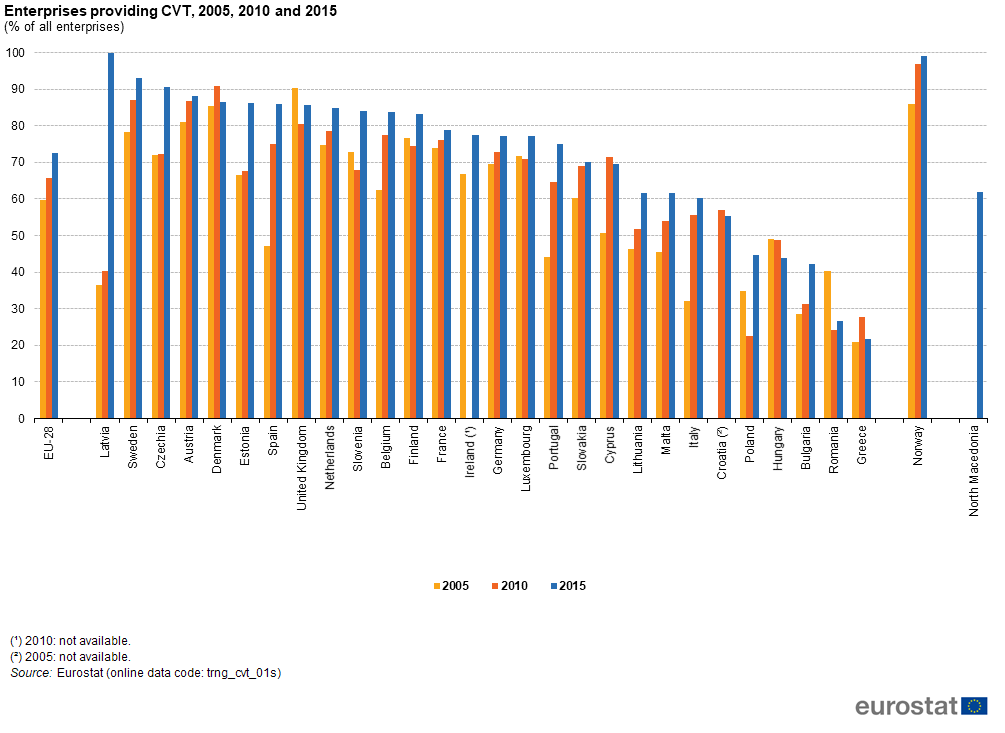 Comparing the proportion of enterprises providing CVT courses and those providing other forms of CVT, differences in excess of 10 percentage points were observed in 13 of the EU Member States, with enterprises in Finland, Spain, France and Czechia more likely to provide CVT courses, whereas enterprises in Poland, Lithuania, Germany, the United Kingdom, Portugal, Malta, Estonia, Ireland and Latvia were more likely to provide other forms of CVT. 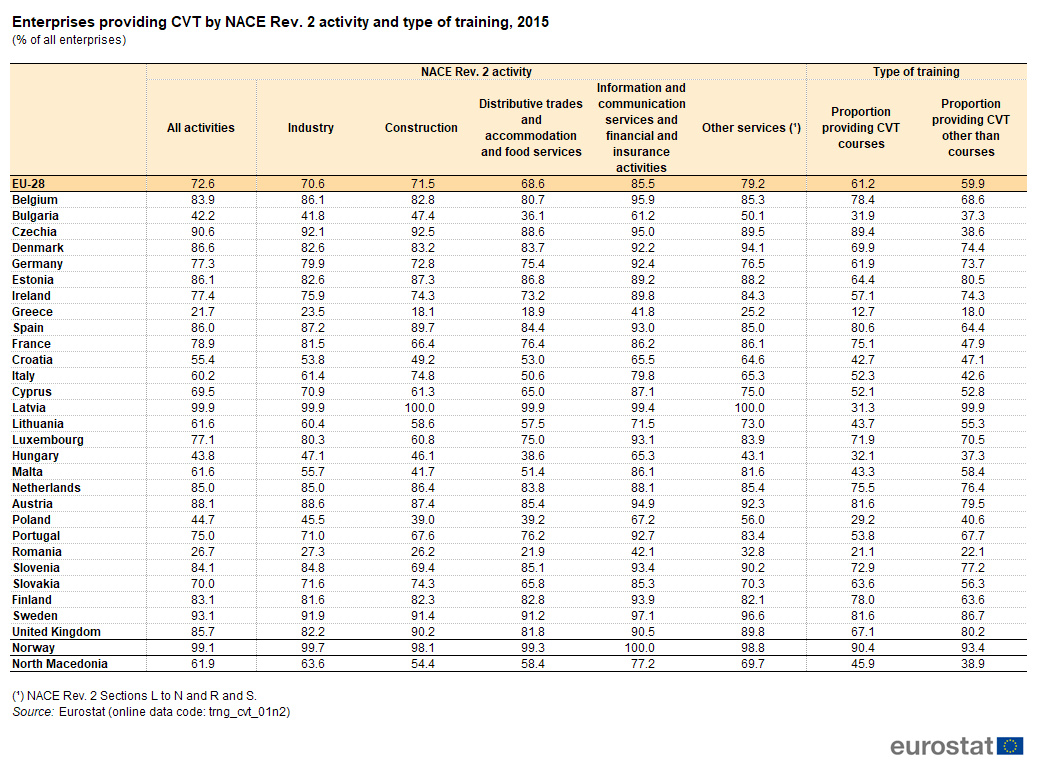 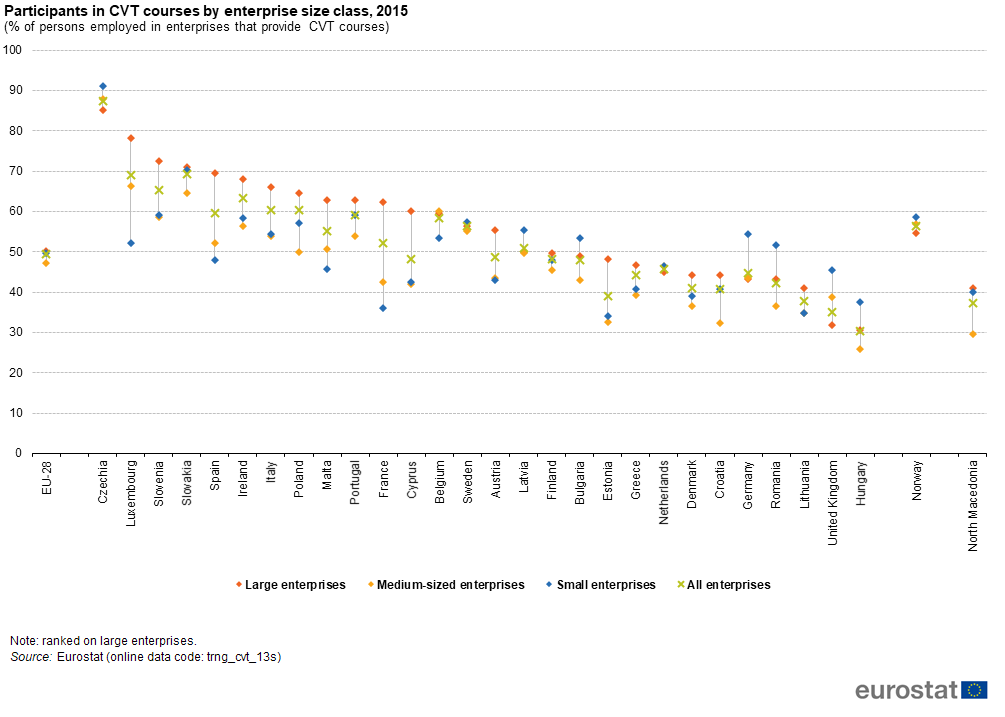 As for CVT participation rates, data on the cost of CVT only relate to CVT courses and not to other forms of CVT. The data on the cost of CVT courses (as shown in Figure 6) have been converted to purchasing power standards (PPS) rather than presenting these costs in euros; purchasing power standards are an artificial currency which adjusts for price level differences between countries. 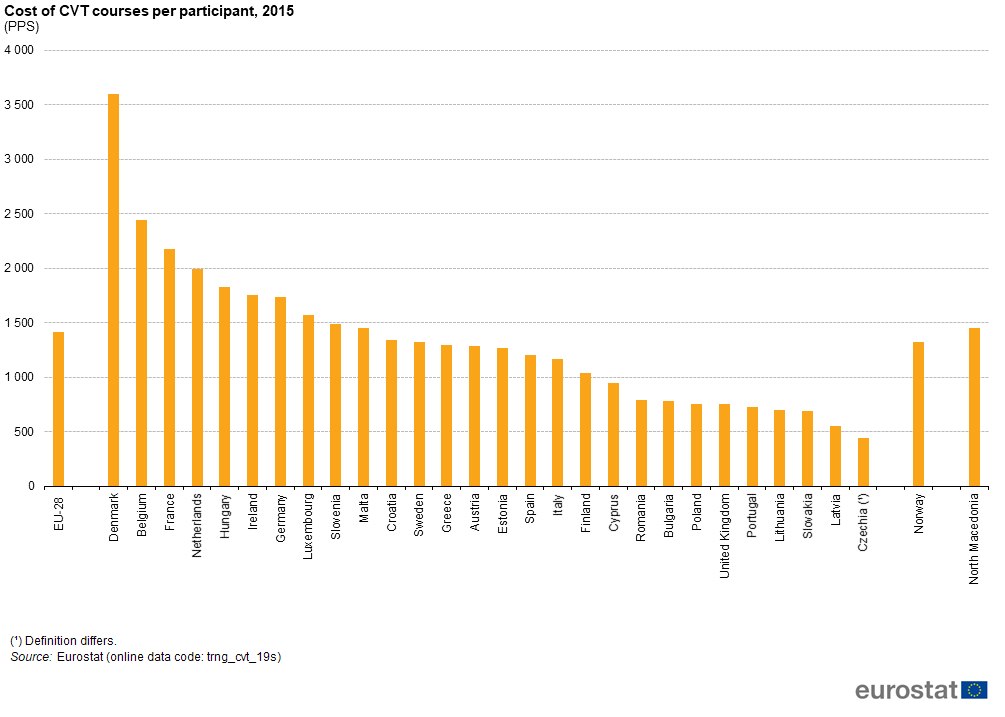 The overall costs incurred by enterprises for the provision of CVT courses correspond to total monetary expenditure. This total is composed of direct costs, participants’ labour costs and net contributions, where the latter is the balance between contributions to and receipts from training funds. In 2015, total training costs for EU-28 enterprises represented an average of 1.7 % of total labour costs (see Table 3); half of this figure (0.8 %) represented participants’ labour costs, and most of the rest (0.7 %) was direct costs. Latvia was the only EU Member State in 2015 where the cost of CVT courses was less than 1.0 % of total labour costs (this situation was also recorded in North Macedonia), while this ratio exceeded 2.0 % in Luxembourg, Malta, Ireland, the Netherlands, Belgium, France, Slovenia and Denmark. 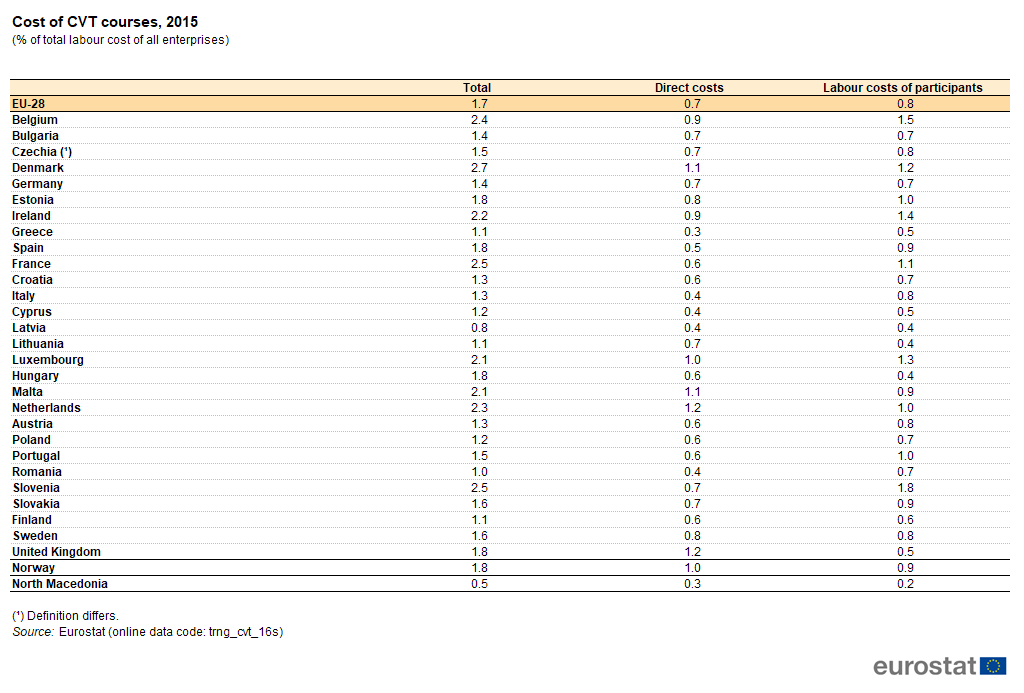 Reasons for enterprises not providing training

As noted above, 72.6 % of EU-28 enterprises provided CVT (including courses and other forms) in 2015 and therefore 27.4 % did not (as shown in Table 4). The two main reasons given by enterprises in the EU for not providing CVT related to recruitment strategies: more than half (54.9 %) of those enterprises not providing CVT did not do so because they tried to recruit people with the required skills while more than four fifths (81.8 %) said that the existing skills and competences of their workforce already corresponded to their needs. A lack of time and CVT being too expensive were the third and fourth most common reasons, given by more than one quarter but less than one third of enterprises (not providing training). 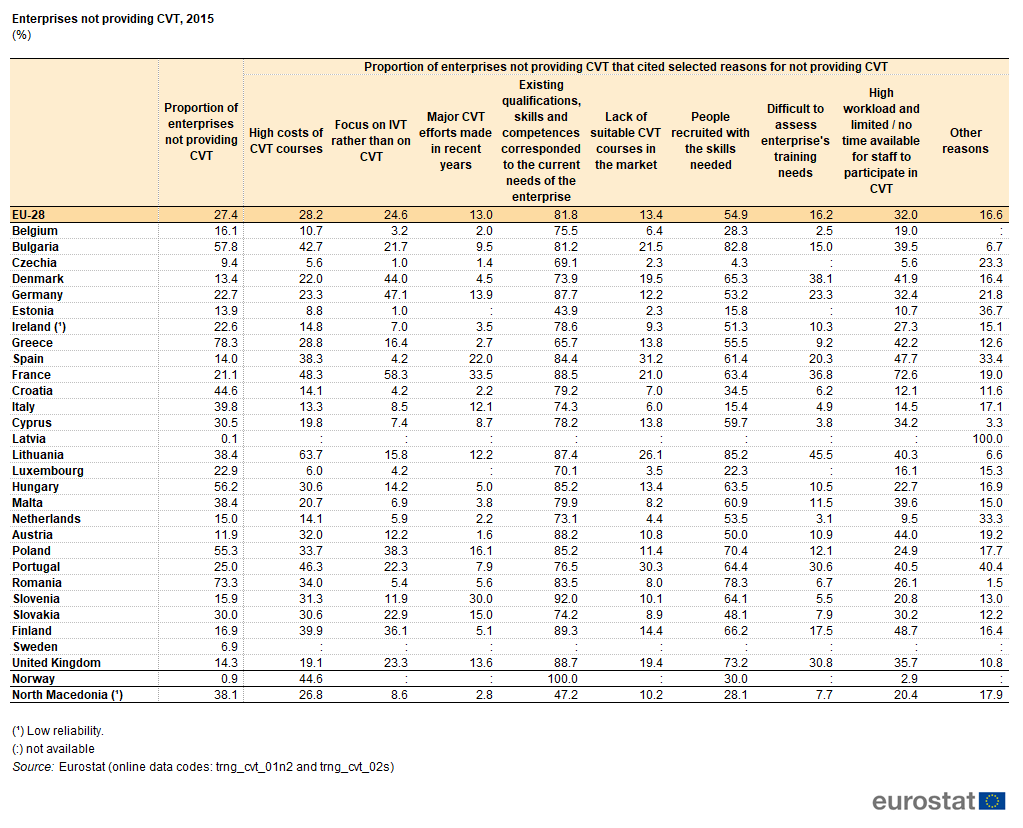 Two principal sources of data are used in this article:

More information about these sources is available in the following articles:

Vocational education programmes are designed for learners to acquire the knowledge, skills and competencies specific to a particular occupation, trade, or class of occupations or trades. Vocational education may have work-based components (such as apprenticeships or traineeships). Successful completion of such programmes leads to labour market-relevant vocational qualifications acknowledged as occupationally-oriented by the relevant national authorities and/or the labour market.

A graduate is an individual who has successfully completed an education programme.

CVT in enterprises concerns training measures or activities which have as their primary objective the acquisition of new competences or the development and improvement of existing ones. CVT in enterprises must be financed, at least in part, by the enterprise and should concern persons employed by the enterprise (either those with a work contract or those who work directly for the enterprise such as unpaid family workers). Persons employed holding an apprenticeship or training contract should not be taken into consideration for CVT. The training measures or activities must be planned in advance and must be organised or supported with the special goal of learning. Random learning and initial vocational training (IVT) are explicitly excluded.

CVT courses are typically clearly separated from the active workplace (learning takes place in locations specially assigned for learning like a classroom or training centre). They show a high degree of organisation (time, space and content) by a trainer or a training institution. The content is designed for a group of learners (for example a curriculum exists), while two distinct types of courses may be identified — internal and external CVT courses.

A participant in CVT courses is a person who has taken part in one or more CVT courses during the reference year. Each person should be counted only once, irrespective of the number of CVT courses he or she has participated in.

The costs of CVT courses cover direct costs, participants’ labour costs and the balance of contributions (net contribution) to and receipts from training funds.

The CVTS also collects some information on initial vocational training (IVT) within enterprises which is defined as a formal education programme or a component of it where the working time of the paid apprentices/trainees alternates between periods of practical training in the workplace and general/theoretical education in an educational institution or training centre. For 2015, the coverage was training within ISCED levels 2-5, in other words, secondary and post-secondary non-tertiary education as well as short-cycle tertiary education. The length of IVT should be between six months and six years. Voluntary apprenticeships/traineeships are excluded.

The conclusions of the November 2010 Council underlined the need for data on VET systems in the context of the Copenhagen process and the important contribution VET systems can potentially make to the Europe 2020 strategy. In particular, the Bruges communiqué states that ‘policy-making in VET should be based on existing comparable data. To this end, and using the lifelong learning programme, Member States should collect relevant and reliable data on VET — including VET mobility — and make these available for Eurostat. Member States and the European Commission should jointly agree on which data should be made available first’.

The ET 2020 strategy set a number of benchmarks to be achieved by 2020, including that an average of at least 15 % of adults aged 25 to 64 should participate in lifelong learning. Two supplementary benchmarks on learning mobility were adopted by the Council in November 2011, including one that, by 2020, an EU average of at least 6 % of 18 to 34 year-olds with an initial vocational education and training (VET) qualification should have had an initial VET-related study or training period (including work placements) abroad lasting a minimum of two weeks, or less if documented by Europass.

The Erasmus programme was one of the most well-known European programmes and ran for just over a quarter of a century; in 2014 it was superseded by the EU’s programme for education, training, youth and sport, referred to as ‘Erasmus+’. It is expected that four million people will benefit from Erasmus+, including around 650 thousand vocational training and education students.