In almost a fifth of EU regions, the majority of the unemployed out of work for at least a year 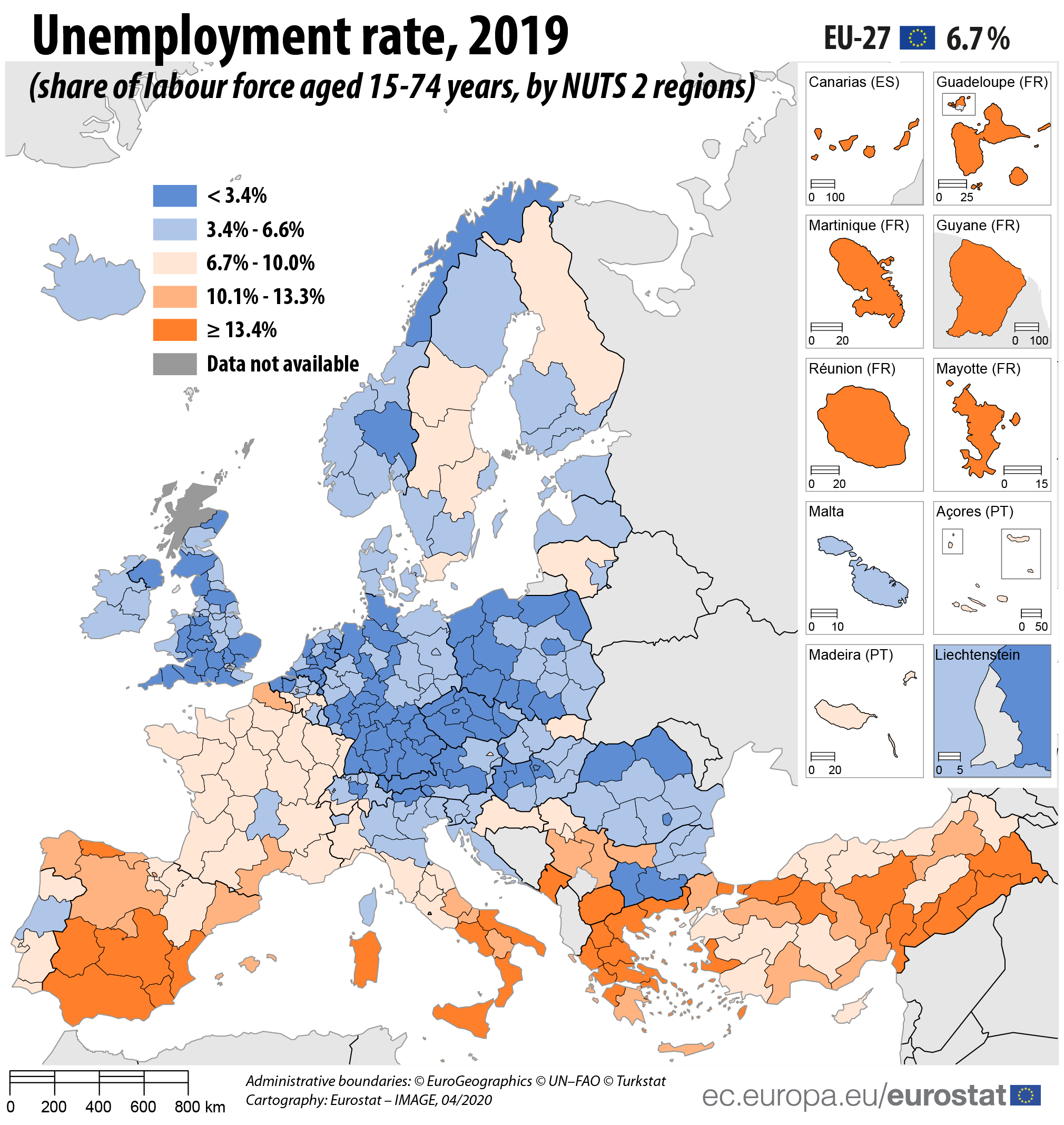 This article provides an overview of regional unemployment rates across the 240 NUTS-2 regions of the European Union's (EU) Member States in 2019, compiled by Eurostat on the basis of data from the EU Labour force survey.

In 2019, the year before COVID-19 containment measures were widely introduced by EU Member States, unemployment rates continued to vary widely across the NUTS 2 regions of the EU’s 27 Member States. The lowest rates were recorded in four Czech regions: Prague and Central Bohemia (both 1.3 %), South-West (1.5 %) as well as North-East (1.7 %), followed by West Transdanubia (1.8 %) in Hungary, two German regions, Upper Bavaria and Tübingen, and one further Czech region, South-East (all 1.9 %). At the opposite end of the scale, the highest unemployment rates were registered in Mayotte (30.1 %) an overseas region of France, the Spanish autonomous cities of Melilla (27.0 %) and Ceuta (25.8 %) and two Greek regions, West Macedonia (24.6 %) and Western Greece (24.1 %).

Compared with 2018, almost three quarters (74 %) of EU’s regions saw their unemployment rate for persons aged 15-74 fall. Almost half (48 %) recorded a decrease of at least 0.5 percentage points.

Among the 239 EU regions for which data are available, 66 had an unemployment rate of less than 3.4 % in 2019, half the average of the EU (6.7 %). They included twenty-two regions in Germany, eleven in Poland, eight in the Netherlands, seven in Czechia, five in Austria, four in Hungary, three in Romania, two each in Belgium and Bulgaria, as well as one each in Italy and Slovakia.

In contrast, 29 regions had an unemployment rate of at least 13.4 %, double that of the EU: ten regions in Greece, nine in Spain and five each in France and Italy.

Youth unemployment rates varied from 2.8 % in North-East in Czechia to 64.0 % in Melilla in Spain

In over 83 % of the EU regions for which data are available, the unemployment rate for young people was at least twice that of total unemployment in the same region. 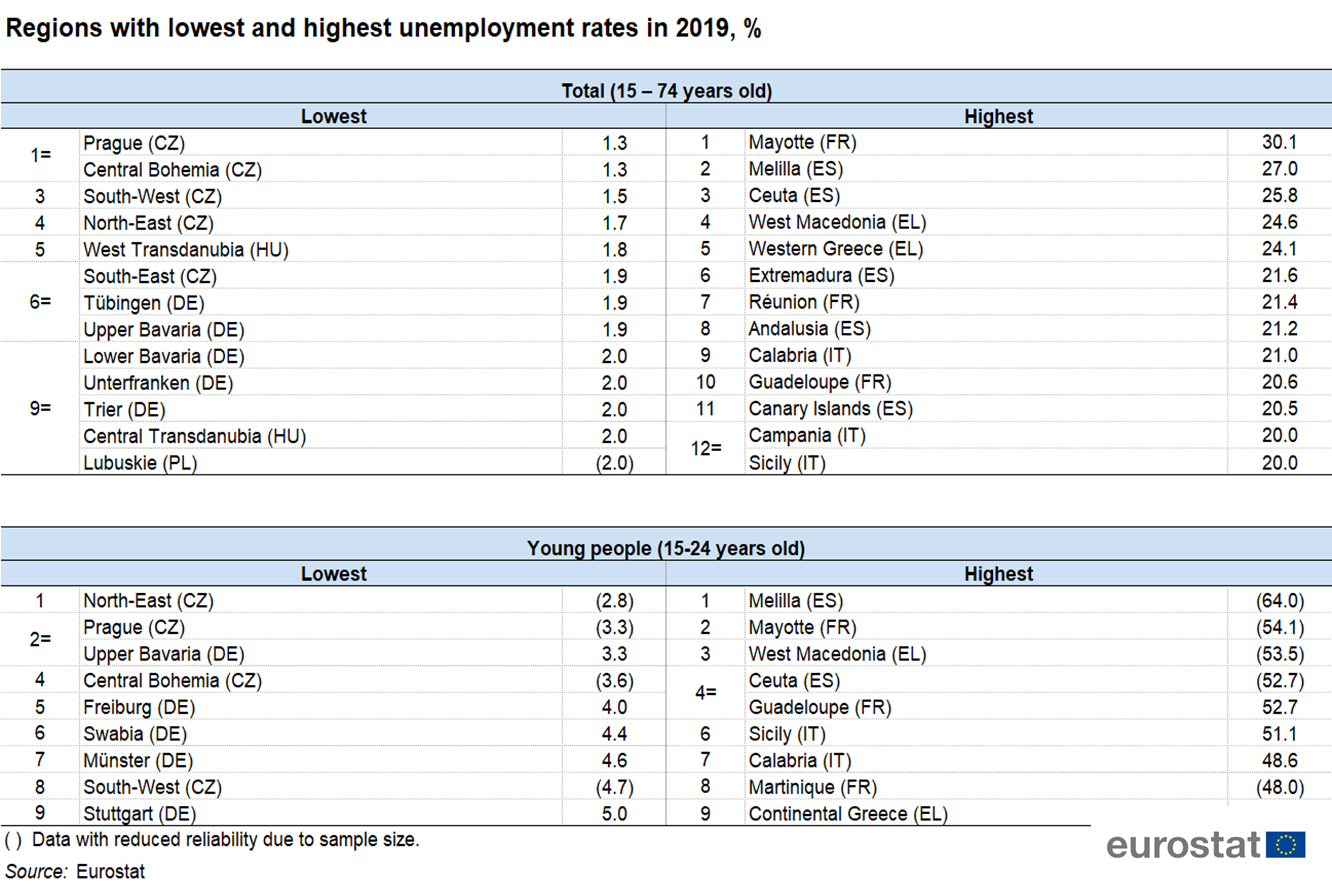 In almost a fifth of regions, the majority of the unemployed out of work for at least a year

The long-term unemployment share, which is defined as the percentage of unemployed persons who have been unemployed for 12 months or more, stood at 41.8 % on average in the EU in 2019. Across EU regions for which data are available, the lowest shares of long-term unemployed were recorded in four Swedish regions, Stockholm (11.3 %), Småland and islands (12.0 %), South Sweden (13.1 %) and West Sweden (13.6 %), as well as North and East Finland (14.2 %).

These data on regional unemployment, compiled on the basis of the EU Labour force survey, are published by Eurostat, the statistical office of the European Union.

The data are based on the Nomenclature of territorial units for statistics (NUTS 2016) as set out in the amending Commission Regulation (EU) No 2016/2066 of 21 November 2016. NUTS 2016 (valid from 1 January 2018) provides a uniform, consistent breakdown of territorial units for the production of regional statistics for the EU and the United Kingdom.

The statistical regions in the candidate and EFTA countries follow the principles of the NUTS classification; however there is no legal base: Norway (7), Switzerland (7), Serbia (8) and Turkey (26), while Iceland, Montenegro and North Macedonia are considered as single regions at NUTS level 2.

The United Kingdom left the European Union on 31 January 2020. Information on dissemination of European statistics from 1 February 2020 is published on the Eurostat website.

In the text of this article, the names of the regions are in English, while the tables in the annex list regions in the national language as set out in the NUTS.

According to the recommendations of the International Labour Organisation, a person is deemed to be unemployed if all three of the following conditions are met:

France: The actual net sample for Corsica (FRM0) is too small to have reliable regional results and Mayotte (FRY5) is covered by a specific annual survey. As a result, data for these two regions should be treated with caution.