Unemployment statistics and beyond

Unemployment levels and rates move in a cyclical manner, largely related to the general business cycle. However, other factors such as labour market policies and demographic changes may also influence the short and long-term development of unemployment.

Please take note that numbers and rates shown in the tools and mentioned in the text of this article may differ in some cases, due to continuous revision of the source data: the tools refer to the most recent data (as shown in the Eurostat database under Employment and unemployment (Labour Force Survey) (employ)), while the text refers to data from April 2020.

How has unemployment evolved in the last 15 years ?

The interactive line chart (see Tool 1) shows how the unemployment rate has changed since 2005 by country. By clicking on the icons at the bottom of the tool, development for specific breakdowns of the unemployment rate can be observed: from left to right, you can switch from the total population to women, men, youth and senior population, respectively.

Differences persist between men and women

The unemployment rate of women and men between 2005 and 2019 for each country is available in the second and third icons of Tool 1. For a large majority of years and countries, women record a higher unemployment rate than men. This is also true for the EU-27 as a whole, where the gender unemployment gap has nevertheless narrowed from 1.8 p.p. in 2005 to 0.6 p.p. in 2019.

Youths are more exposed to unemployment than seniors

High youth unemployment rates reflect, to some degree, the difficulties faced by young people in finding jobs. However, this does not necessarily mean that the group of unemployed persons aged between 15 and 24 is large, as many young people, as opposed to older people, are studying full-time and are therefore neither working nor looking for a job (so they are not part of the labour force which is used as the denominator for calculating the unemployment rate). For this reason, the youth unemployment ratio is calculated as an alternative indicator for the purpose of analysis — it presents the share of unemployed youths among the whole youth population. 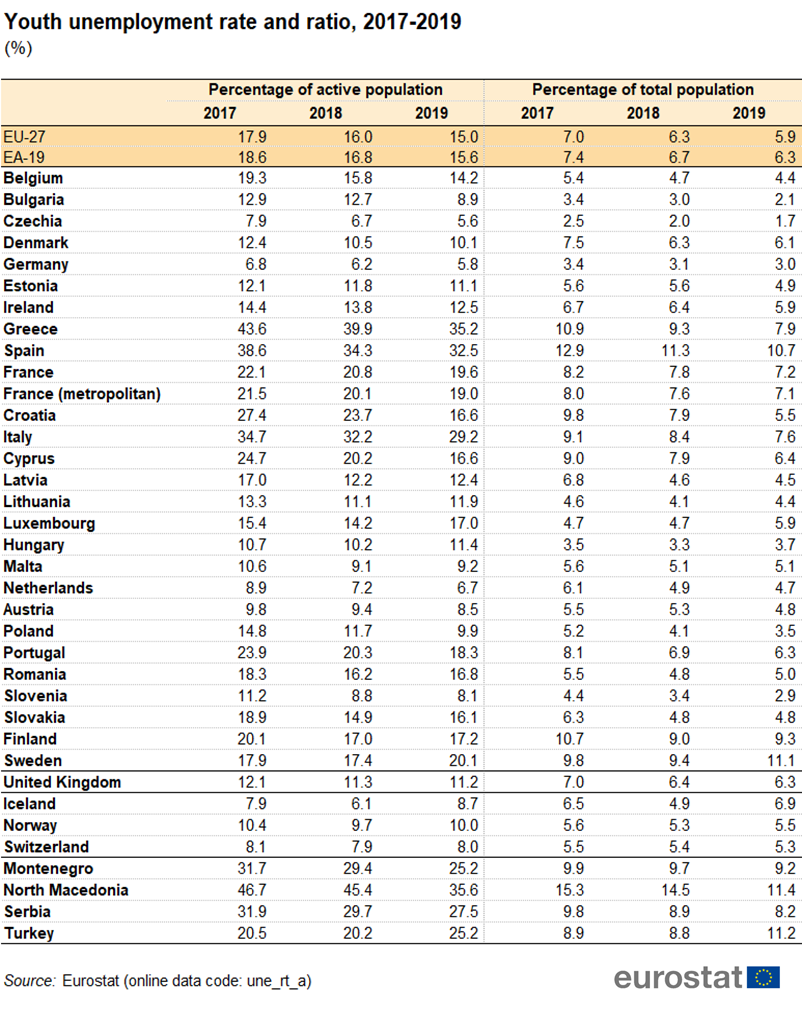 How does educational level affect unemployment ?

What about long-term unemployment ? 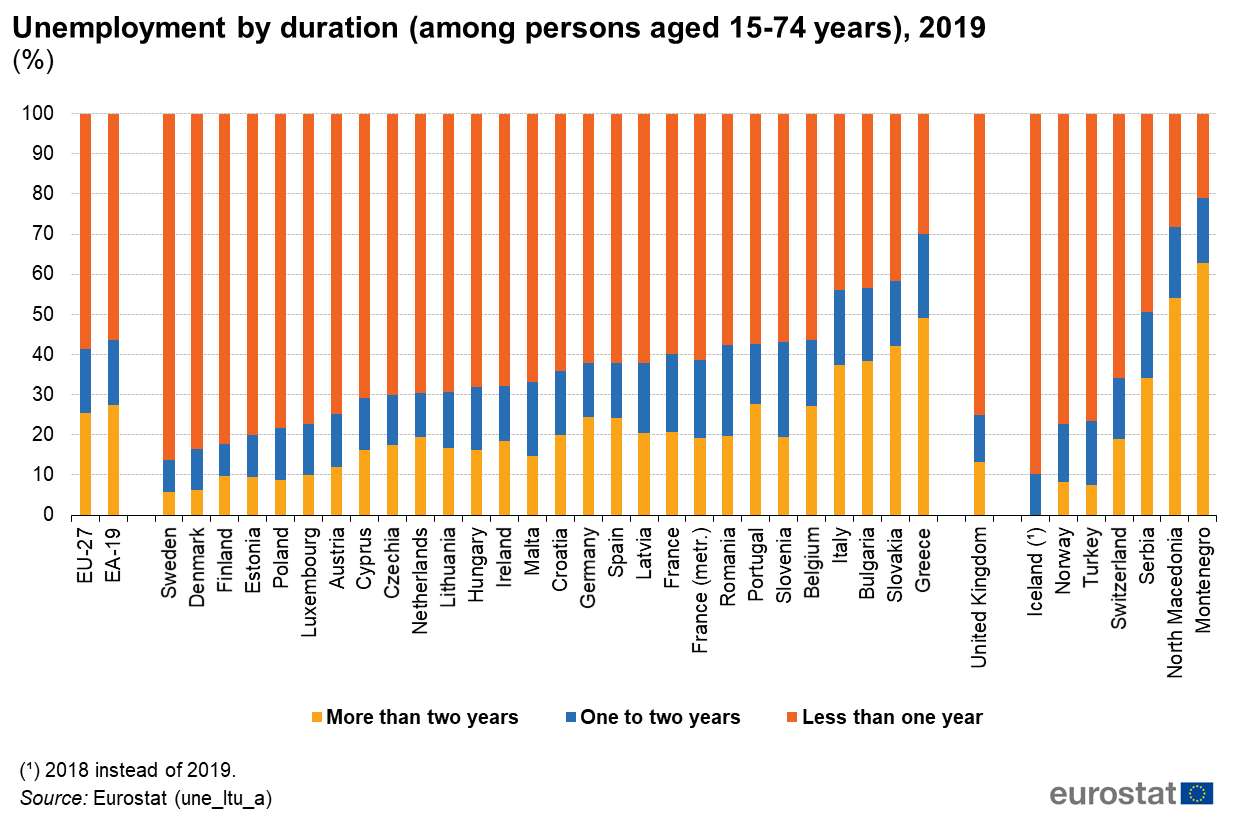 Infographic 1 presents a graphical description of the populations included in the supplementary indicators, their absolute and relative sizes, and their relation to the other main groups covered by the labour force survey. In 2019, the 6.4 million underemployed part-time workers are a sub-population of the 37.9 million part-time workers. The 8.5 million persons in the potential additional labour force are a sub-population of the 117.9 million inactive persons. 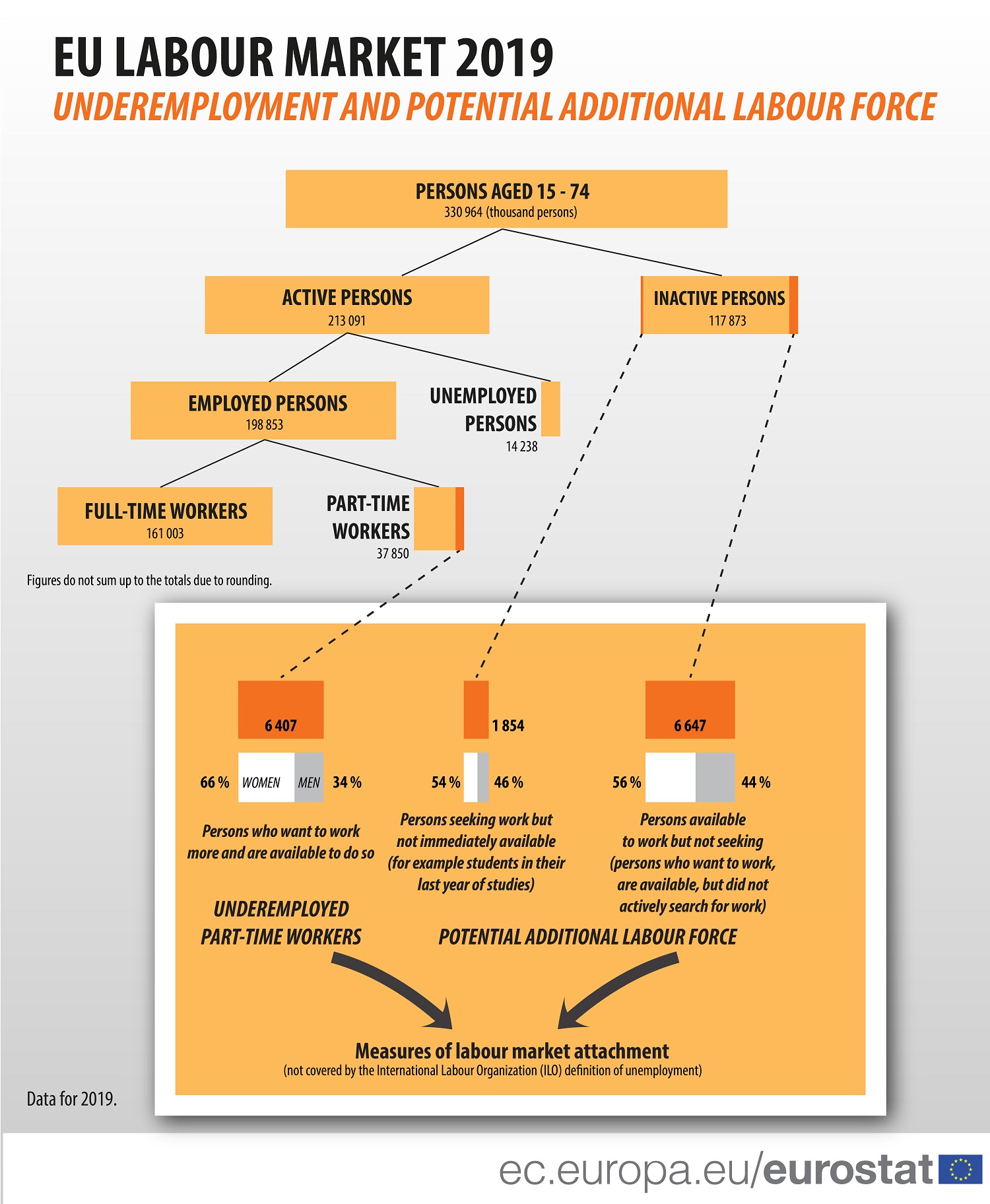 Please note that Eurostat provides two sets of indicators linked to the annual unemployment rate, which serve different purposes and which in some cases differ from each other:

1) The main indicators, which are seasonally adjusted. They have only a few breakdowns and normally refer to the age group 20-64 for employment and to the age group 15-74 for unemployment. Please note that for France, two series are published: one including overseas departments starting in 2003, and one for metropolitan France, excluding overseas departments, starting in 1992. The latter is evaluated in the EU2020 strategy, and also included in the relevant EU and EA aggregates.

2) The detailed results, which are not seasonally adjusted. They have a large number of breakdowns and can therefore be used for more detailed analysis. For France, only one data series is published. This series contains data for metropolitan France until the fourth quarter of 2013, and from 2014 on, also the French overseas departments.

This article presents annual results for indicators from the "main indicators" set.

Monthly unemployment figures are published by Eurostat as rates (as a percentage of the labour force) or levels (in thousands), by sex and for two age groups (persons aged 15 to 24, and those aged 25 to 74). The figures are available as unadjusted, seasonally adjusted and as a trend series. The time series for data for the EU-28 and the euro area (EA-19) aggregates start in 2000; the starting point for individual EU Member States varies.

Unemployment rates are also presented according to the educational attainment of the population. The different levels of education are defined by the United Nations International Standard Classification of Education (ISCED 2011).

Many persons only partially fulfil the three unemployment criteria above and are therefore not considered as unemployed. In order to provide information on people who are not unemployed, Eurostat also publishes indicators on the following groups.

Time series for unemployment are used by the European Commission, other public institutions, and the media as an economic indicator, while banks may use the data for business cycle analysis. Finally, there is interest among the general public for information concerning unemployment.

Globalisation and technological developments appear to have an ever-increasing effect on daily life, and the demand for different types of labour and skills changes, sometimes at a rapid pace. While enterprises try to improve their productivity and become more competitive and innovative, they may well seek to pass on risk to the labour force through greater flexibility — both in relation to those already in employment, as well as those searching for a new job. Within the context of the European employment strategy (EES), there are a number of measures that are designed to help encourage people to remain in work or find a new job, including: the promotion of a life-cycle approach to work, encouraging lifelong learning, improving support to those seeking a job, as well as ensuring equal opportunities.

The Europe 2020 strategy put forward by the European Commission sets out a vision of Europe’s social market economy for the 21st century. As part of the flagship initiatives, An agenda for new skills and jobs and Youth on the move, (youth) unemployment rates were targeted via a range of policies, including proposals aimed at education and training institutions, or measures for the creation of a (work) environment conducive to higher activity rates and higher labour productivity.

The financial and economic crisis and the subsequent slow pace of recovery reversed much of the progress achieved in European labour markets. In response to increasingly high levels of unemployment, the European Commission launched in April 2012 a set of measures to boost jobs, the so called Employment package.

The Youth employment initiative (2013) reinforced and accelerated measures in this field, aiming to support young people who are not in education and employment or training in those regions where youth unemployment rates are above 25 %.