This article describes the methodology of the European Union Labour Force Survey (EU-LFS) from the year 2021 onwards. It gives information on the labour force status and on the main indicators derived from it. It also provides specific information on the other concepts and definitions the labour force status is grounded on, as well as the references to the variables available in the EU-LFS datasets. Furthermore, it presents the main changes occurred with the entry into force of Regulation (EU) 2019/1700, also called the Integrated European Social Statistics Framework Regulation (IESS FR) and its Implementing Regulation (EU) 2019/2240 for the labour force domain.

This article is part of a set of online articles on the EU-LFS.

Definition of the labour force status

The labour force status is the cornerstone concept for labour market statistics. Accordingly, people are classified in three main categories as employed, unemployed or outside the labour force. The additional aggregated category labour force includes all employed and unemployed persons.

The classification of each person in one category is based on the answers they gave during the interview referring to a specific calendar week, called the reference week. This week was assigned to the person during the sampling procedure, in order to ensure an even distribution of the sample over all weeks of the year.

Definitions used in the EU-LFS for the employed and unemployed persons as well as for people outside the labour force follow the Resolution of the 13th International Conference of Labour Statisticians (ICLS), convened in 1982 by the International Labour Organisation (ILO), and their amendments as decided in the following ICLS occurrences (hereafter referred as the ‘ILO guidelines’). To ensure comparability within the EU, while remaining fully compatible with the ILO guidelines, the Regulation (EU) 2019/1700, also called the Integrated European Social Statistics Framework Regulation (IESS FR) and its Implementing Regulation (EU) 2019/2240 for the labour force domain provide a precise implementing definition for each labour force status.

Categories of the labour force status

Persons in own-use production work, voluntary workers, unpaid trainees and individuals involved in other forms of work are not included in employment on the basis of those activities.

They comprise persons aged 15 to 74 (in completed years at the end of the reference week) who were:

For the purpose of identifying active job search, such activities are:

Seasonal workers not at work during the reference week (off-season) but who expect to return to their seasonal job are to be considered as having ‘found a job’.

People in the labour force:

They comprise persons who were either employed or unemployed during the reference week. This aggregate includes all persons offering their work capacity on the labour market: the supply side of the market.

People outside the labour force:

They comprise persons who were in one of the following categories:

Derivation of the labour force status

Given the complexity of the definitions of employment and unemployment (described here above), and in order to achieve a measurement as objective as possible, the EU-LFS respondents are not directly asked if they are employed, unemployed or outside the labour force. Instead, they are asked about their labour market behaviour in the reference week, and their labour status is derived according to the following derivation chart (see Figure 1).

For the detailed flowchart of each submodule, see Annex II of the Implementing Regulation (EU) 2019/2240 for the labour force domain. 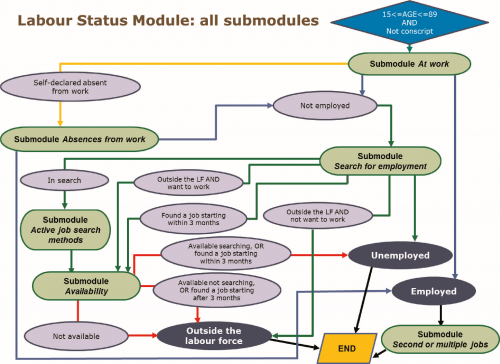 Other concepts and definitions

This section gives an overview of other important concepts and definitions beside the labour force status used in the EU-LFS. The reference documents for the definitions of these variables are the EU-LFS user guide and the EU-LFS explanatory notes. They contain detailed information on the definition of each variable.

Educational attainment and participation in education and training

Sector of activity and professional status

Main indicators being expressed as a rate

Absolute values for the employed and unemployed population as well as for people inside and outside the labour force (see definitions presented above) are published as part of the main outputs of the EU-LFS. Based on these absolute values, some important percentage indicators are calculated and published. They also represent an important output of the EU-LFS. Main percentage indicators are:

Regulation (EU) 2019/1700, which is in force from 1 January 2021 onwards, provides for a framework that applies to several data collections in the field of social statistics. The aim is to increase the data quality of social statistics, and its comparability across EU Member States, but also its comparability across domains in social statistics, e.g. labour force versus income and living conditions domains. Better harmonisation across domains is namely reached through the inclusion of standardised core and key social variables in the different data collections (with, for example, the main activity status, educational attainment level, self-perceived general health, degree of urbanisation, etc.).

With regards to the EU-LFS, main changes in the list of variables are the following:

Major changes also concern the measurement of the labour force status, and its input harmonisation through the inclusion of flowcharts in the Commission Implementing Regulation EU 2019/2240. The operationalisation of the concepts of employment, unemployment and outside the labour force underwent the following changes:

Important changes have also been brought in other variables to reach a more uniform measurement among the EU Member States and thus to achieve more comparable results at European level:

Finally, more technical and methodological changes have been introduced:

Additional information by country can be found in the following national publications: