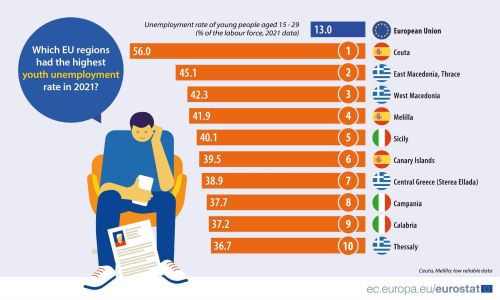 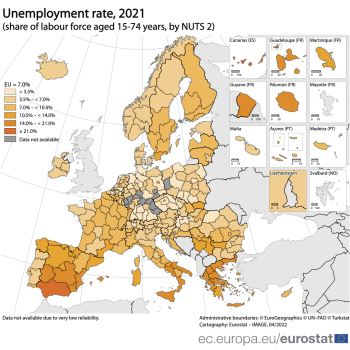 Around a sixth of EU regions had an unemployment rate lower than 3.5 %

By contrast, 25 regions had an unemployment rate of at least 14 %, double that of the EU: 9 regions were in Greece and Spain, 4 in Italy and 3 in France (all outermost regions).

When comparing the unemployment rates across regions in each country (see Figure 2), Spain has the largest gap between its regions, with the highest and lowest unemployment rates in 2021; this gap was 16.8 percentage point (pp.). Italy and France followed with gaps of 15.5 pp. and 12.1 pp. respectively. 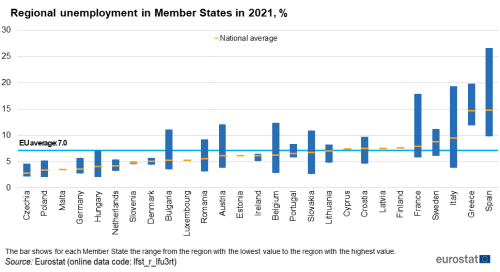 Table 1: Regions with highest decreases and increases in the unemployment rate for people aged 15-74 between 2020 (break-corrected data) and 2021
(in percentage points)
Source: Eurostat (lfst_r_lfu3rt)

Compared with 2020, the highest increases in the unemployment rate were recorded in the Romanian regions of North-East and South-West Oltenia (both +3.1 pp.) and in the French region of Languedoc-Roussillon (+2.2 pp.). On the other hand, the three highest decreases were in Western Greece (-5.8 pp.), the Bulgarian region of North-West (-4.4.pp.) and the Greek region of Epirus (-4.2 pp.). 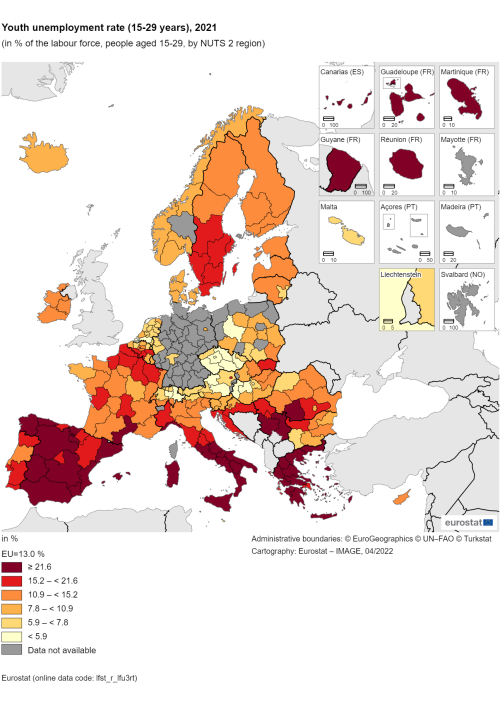 The lowest youth unemployment rates were recorded in the Czech region of South-West (3.7 %), the Polish region of Wielkopolskie (4.0 %) and the Czech region of Central Moravia (4.4 %). There were also low rates in South-East in Czechia and in West Transdanubia in Hungary (both 4.5 %).

Compared with 2020, unemployment for people aged 15-29 in 2021 decreased the most in the Greek regions of Ionian Islands, Epirus and North Aegean 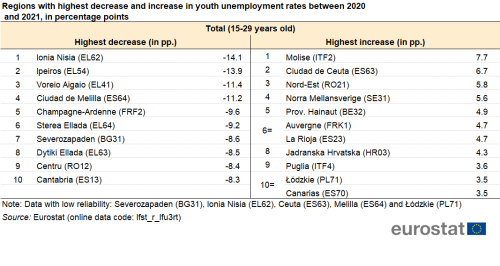 Table 2: Regions with highest decreases and increases in the unemployment rate for people aged 15-29 between 2020 (break-corrected data) and 2021
(in percentage points)
Source: Eurostat (lfst_r_lfu3rt)

The EU regions with the highest shares of long-term unemployment in 2021 were in Greece, Italy, Bulgaria, Slovakia and Spain – almost all countries from South Europe (see Map 3). 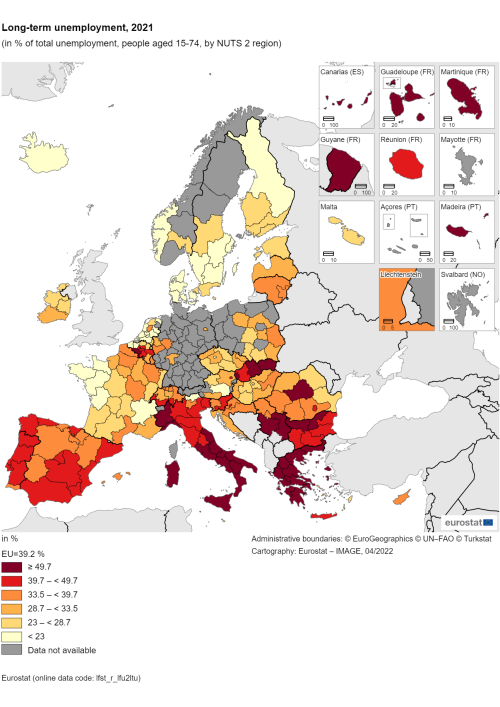 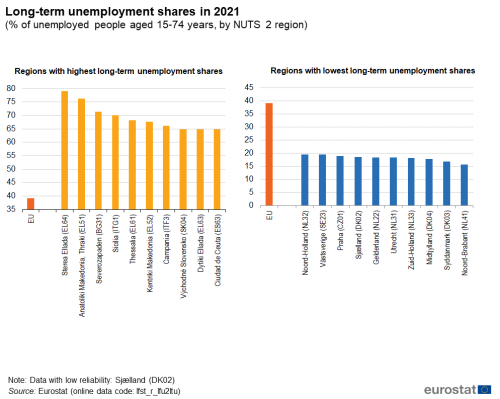 All figures in this article are based on annual results from the EU European Union Labour Force Survey (EU-LFS).

The EU-LFS is the largest European household sample survey providing quarterly and annual results on labour participation of people aged 15 and over as well as on persons outside the labour force. It covers residents in private households. Conscripts in military or community service are not included in the results. The EU-LFS is based on the same target population and uses the same definitions in all countries, which means that the results are comparable between countries.

With regard to the European aggregates, EU refers to the sum of the 27 EU Member States.

The concepts and definitions used in the Labour Force Survey follow the guidelines of the International Labour Organisation (ILO).

According to the ILO recommendations, a person is deemed to be unemployed if all three of the following conditions are met:

In this article, the youth unemployment rate is defined as the number of people aged 15 to 29 unemployed as a percentage of the labour force of the same age.

Being expressed as a percentage of the labour force (and not of the total population) of the same age, the youth unemployment rate should not be interpreted as the share of jobless people in the overall youth population. Youths outside the labour market (for example studying) are neither in the numerator nor the denominator.

These data are based on the 2021 version of the Nomenclature of Territorial Units for Statistics (NUTS) as set out in the amending Commission Delegated Regulation 2019/1755 of 08 August 2019 . NUTS provides a uniform, consistent breakdown of territorial units for the production of European regional statistics. NUTS 2021 applies since 1 January 2021.

The statistical regions in the candidate and EFTA countries follow the principles of the NUTS classification. However, there is no legal base. The data covers NUTS 2021 level 2 regions in Norway (7), Switzerland (7), Serbia (4) and Turkey (26). Iceland, Montenegro and North Macedonia are considered as single regions at NUTS level 2.

In the text of this article, the names of the regions are in English, while the detailed tables which can be downloaded below list regions in the national language as set out in the NUTS.

• In Germany, from the first quarter of 2020 onwards, the Labour Force Survey is part of a new system of integrated household surveys. In this context, technical issues and the COVID-19 crisis has had a large impact on data collection processes resulting in low response rates and a biased sample. The published German data therefore show (very) low reliability in some regions. For more information, see here.

• In the Netherlands, the 2021 LFS data remain collected using a rolling reference week instead of a fixed reference week, i.e. interviewed persons are asked about the situation of the week before the interview rather than a pre-selected week.

• France: Mayotte (FRY5) is covered by a specific annual survey. As a result, data for this region should be treated with caution.

Moreover, youth unemployment is one of the most pressing concerns in the area of social and employment policymaking. The performance of youth labour markets is closely linked to education and training systems and reflects, at least to some degree, a mismatch between the skills obtained by young people and the skills that are required by employers (to fill job vacancies). In recent years, several EU Member States have enacted new employment laws with the goal of liberalising labour markets, for example, by providing a wider range of possibilities for hiring staff through temporary, fixed-term or zero hours contracts. In some cases this has resulted in a division between permanent, full-time employees and those with more precarious employment contracts. The latter are often young people and people with relatively low levels of educational attainment. This may explain, at least to some degree, why young people in the labour market generally fare worse during economic downturns such as the global financial and economic crisis or the COVID-19 pandemic. During a downturn, employers are also less likely to recruit new workers (young people coming into the labour market) or to replace older workers who retire.

In order to ensure a better recovery from the COVID-19 pandemic, the EU has launched the Recovery and Resilience Facility (RRF), which is the key instrument at the heart of NextGenerationEU to help the EU emerge stronger and more resilient from the current crisis. One of the six pillars of the RRF is dedicated to “Policies for the next generation, children and the youth, such as education and skills“. Reforms and investments in children and the youth are essential to ensure that the next generation of Europeans is not permanently affected by the impact of the COVID-19 crisis and that the generational gap is not further deepened. Going into the detail of the national recovery and resilience plans submitted so far allows identifying many relevant measures for the youth, mostly related to education and the labour market. Member States have shown a strong commitment to supporting and advancing policies for the next generation. The Commission has flagged in total 310 measures put forward by Member States whose main objective is to support children and the youth. The majority of the measures will focus on access to, and quality and inclusiveness of general, vocational, and higher education, while other measures will cover youth employment support, and most Member States have dedicated measures in these fields.