Imports, exports and trade balance between the EU and Turkey, 2009-2019

This article provides a picture of the international trade in goods between the European Union (EU) and Turkey. It analyses the type of goods exchanged between the two economies and the shares of each EU Member State in those exchanges.

EU and Turkey in world trade in goods 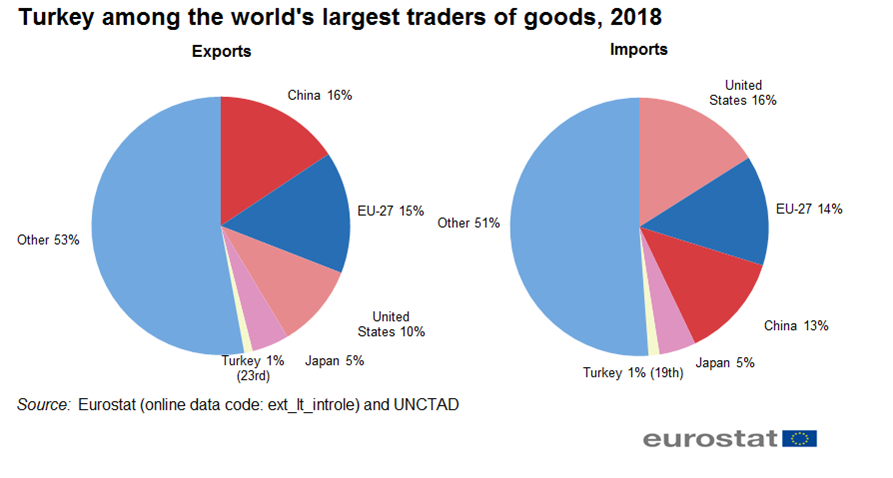 Figure 1a: Turkey among the world's largest traders of goods, 2018
Source: Eurostat (ext_lt_introle) and UNCTAD 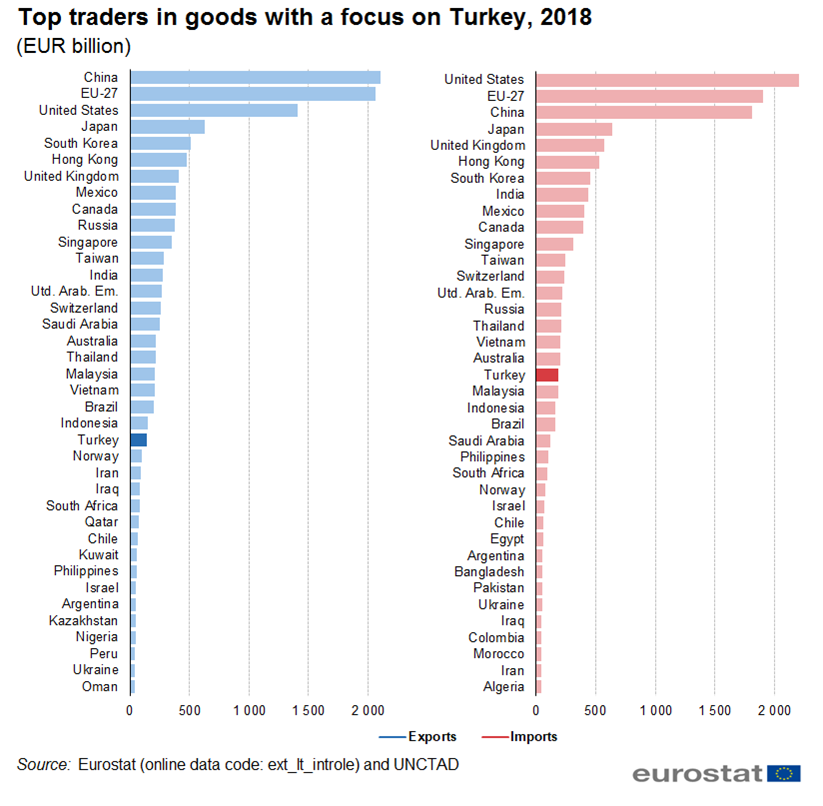 Top traders in goods with a focus on Turkey, 2018 (EUR billion)
Source: Eurostat (ext_lt_introle) and UNCTAD 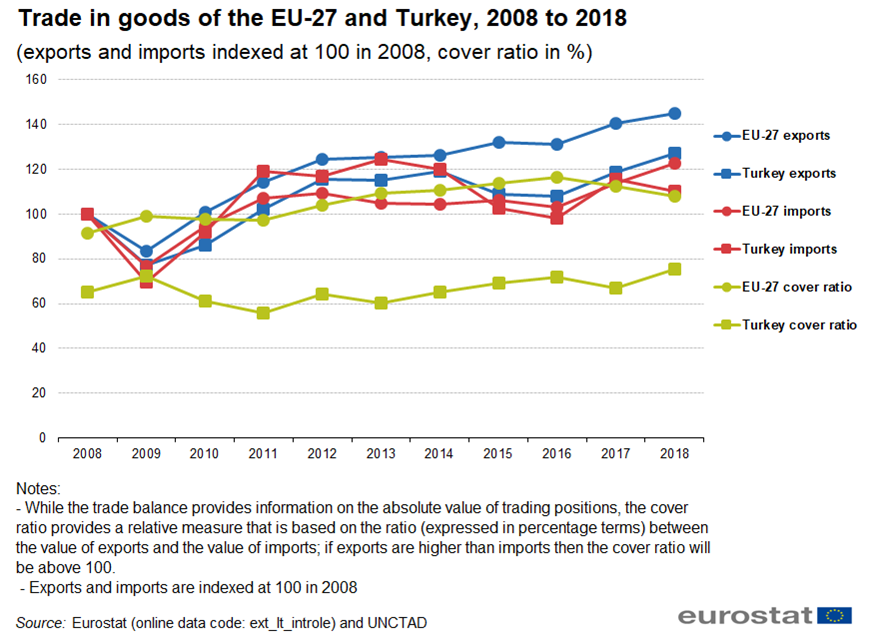 Both exports to and imports from Turkey increased between 2009 and 2019. 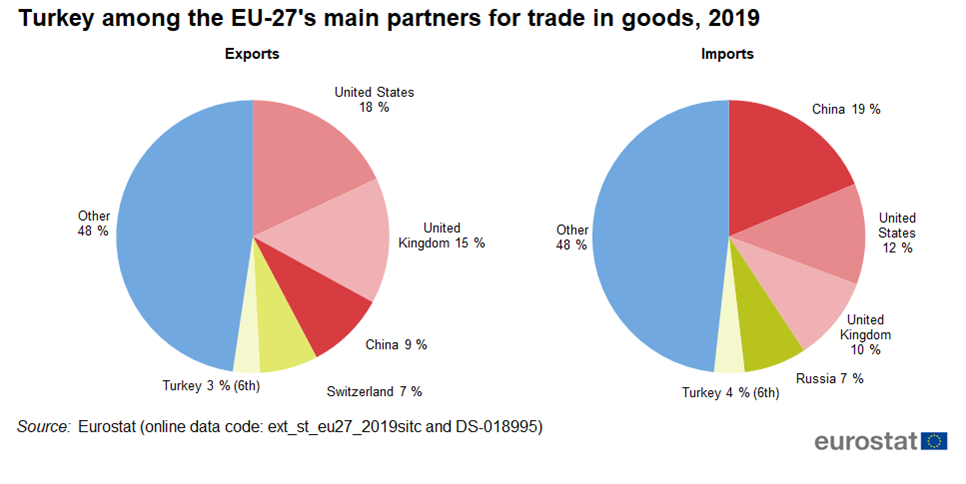 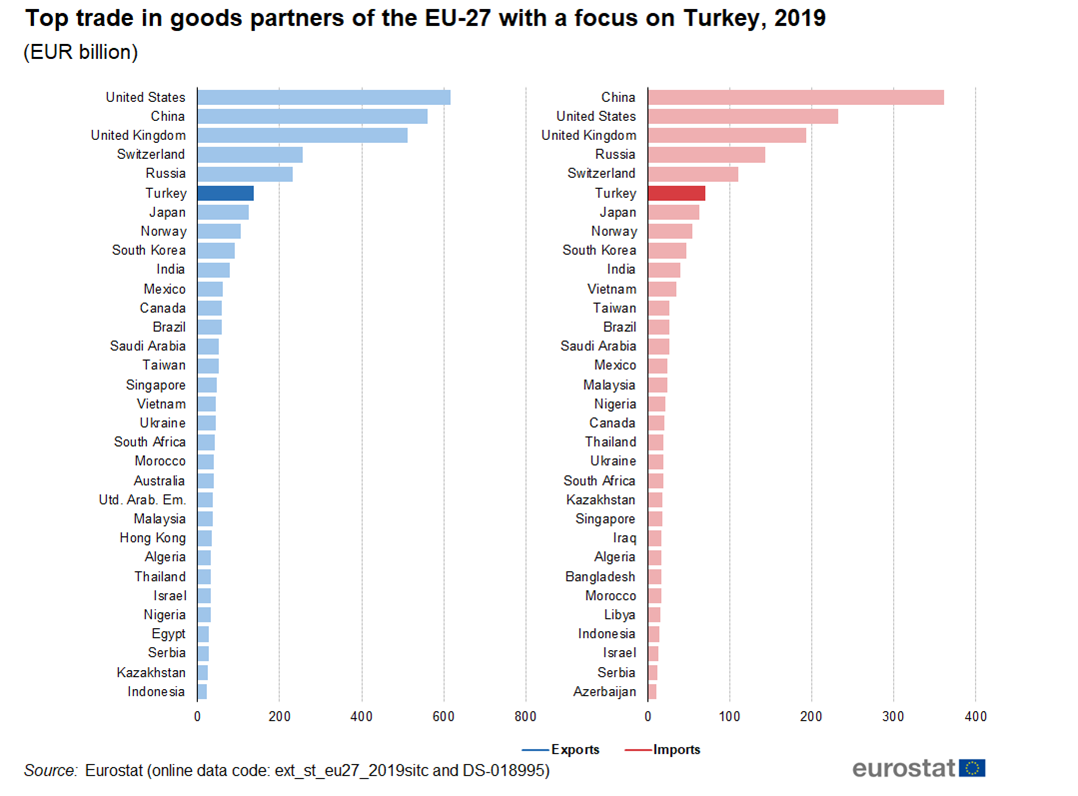 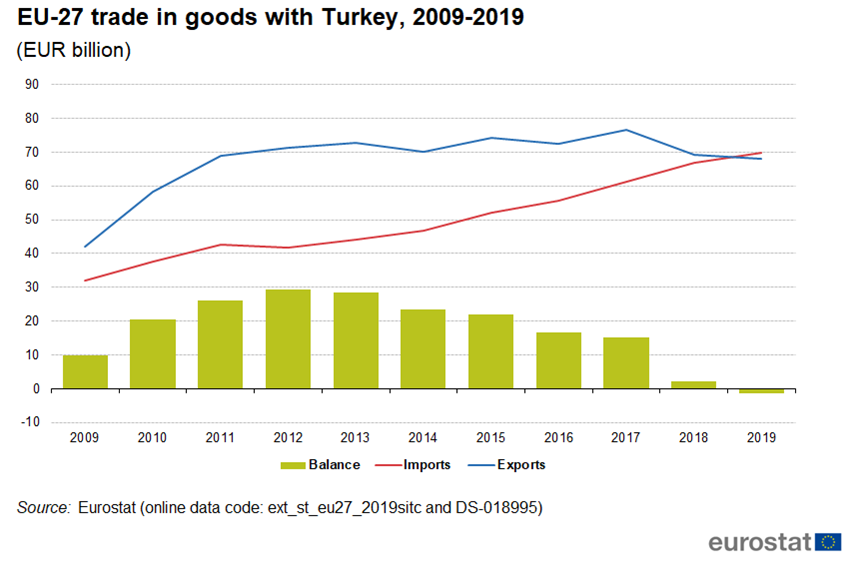 EU-Turkey trade by type of goods 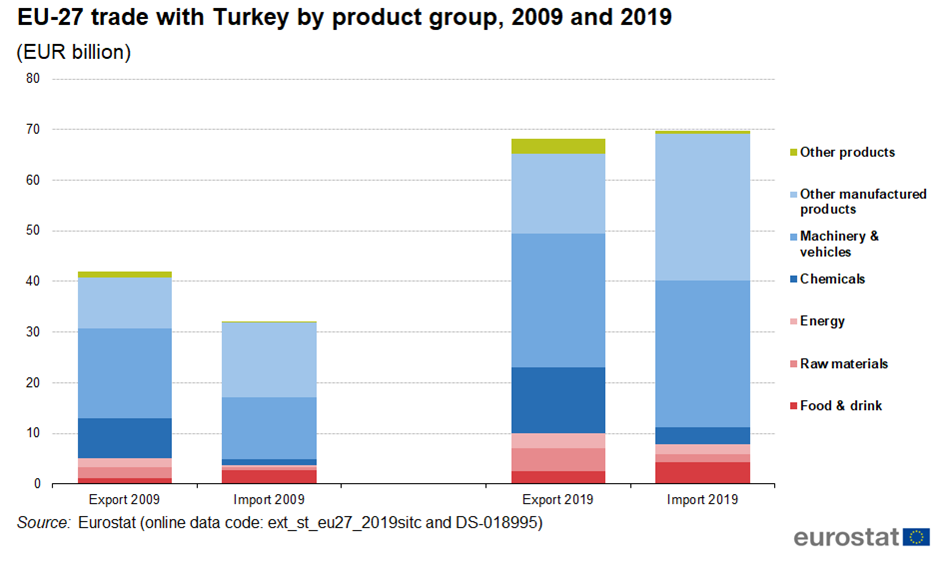 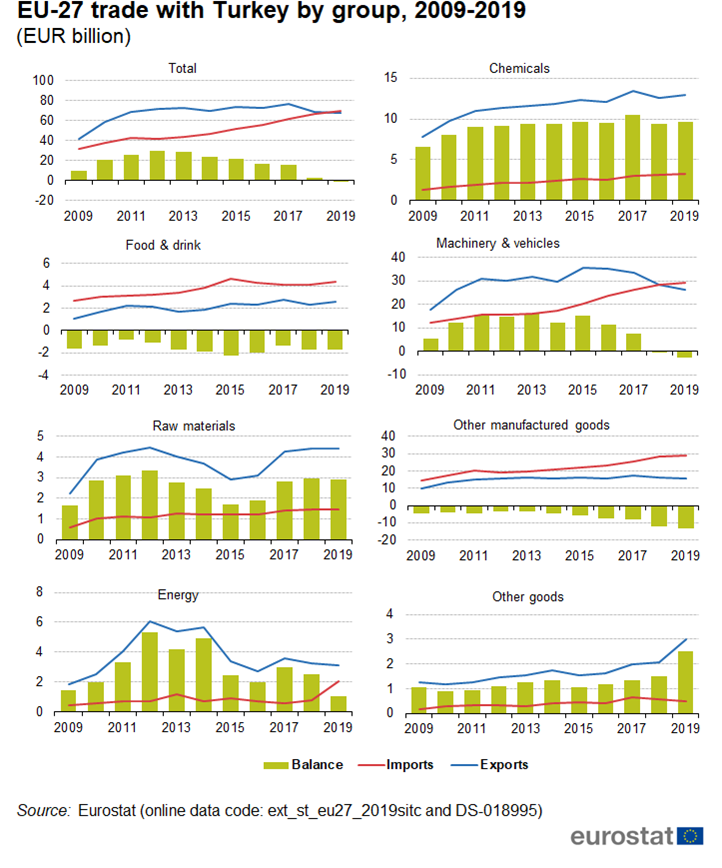 More detail about the goods exchanged between the EU and Turkey is given in Figure 7, showing the 20 most traded goods at SITC-3 level. These top 20 goods covered 45 % of total trade in goods in 2019. Nine belonged to machinery and vehicles, six to other manufactured products, two to chemicals, one each to food and drink, raw materials and energy. The most traded product group at this level was motor cars and motor vehicles. Another interesting way to look at the data is to investigate the cover ratio (exports / imports) of traded goods, showing the direction of the trade flows between the two economies. These ratios can be found in the right-hand margin of Figure 7. Eight products were below 50 %, indicating EU imports from Turkey were at least twice as large as EU exports to Turkey. Seven products were above 200 %, indicating EU exports to Turkey were at least twice as large as EU imports from Turkey. Five products were between 50 % and 200 %, showing more balanced trade. 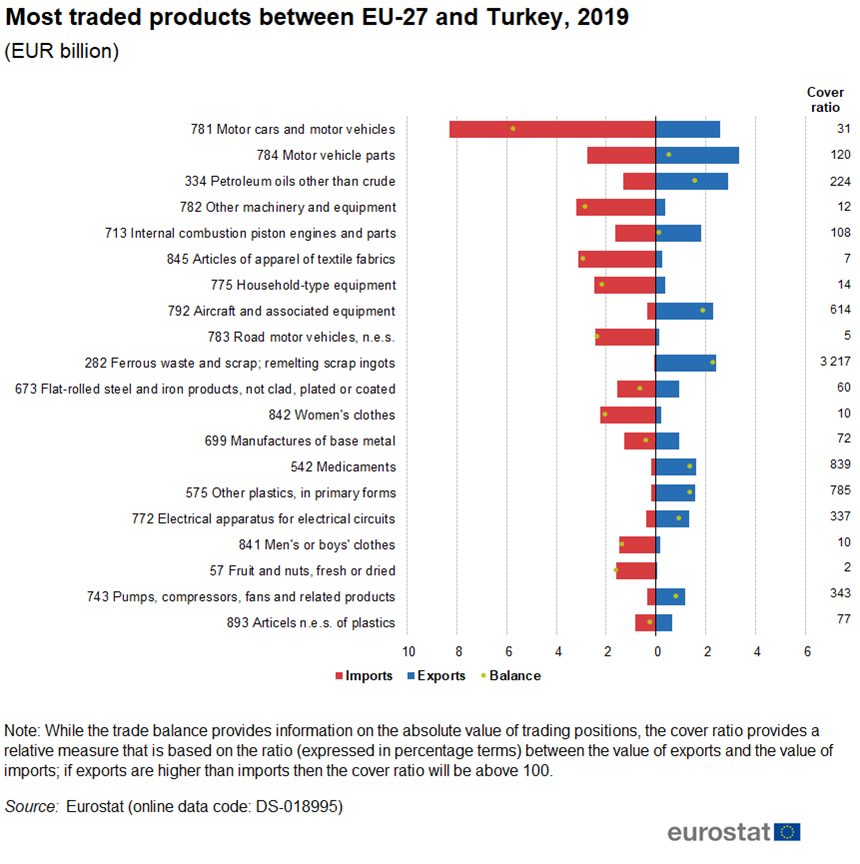 Trade with Turkey by Member State

Table 1a shows the imports of goods from Turkey by Member State. The three largest importers from Turkey in the EU were Germany (EUR 13 286 million), Italy (EUR 9 459 million) and France (EUR 7 581 million). Bulgaria (19.4 %) had the highest share for Turkey in its extra-EU imports. 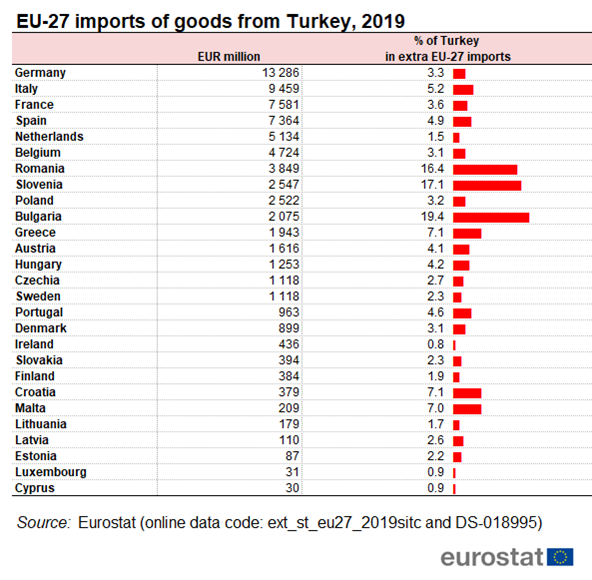 Table 1b shows the exports of goods to Turkey by Member State. The three largest exporters to Turkey in the EU were Germany (EUR 20 045 million), Italy (EUR 8 334 million) and the Netherlands (EUR 6 223 million). Bulgaria (19.8 %) had the highest share for Turkey in its extra-EU exports. 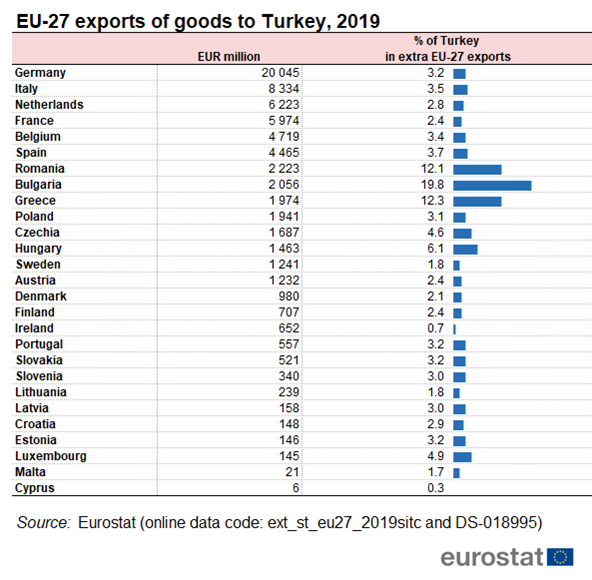 The trade in goods balance between the EU Member States and Turkey is shown in Table 1c. It shows that 14 Member States had a trade surplus with Turkey. The largest surplus was held by Germany (EUR 6 759 million), followed by the Netherlands (EUR 1 089 million) and Czechia (EUR 568 million). Thirteen Member States had a trade deficit with Turkey. The largest deficit was held by Spain (EUR 2 899 million), followed by Slovenia (EUR 2 207 million) and Romania (EUR 1 626 million). 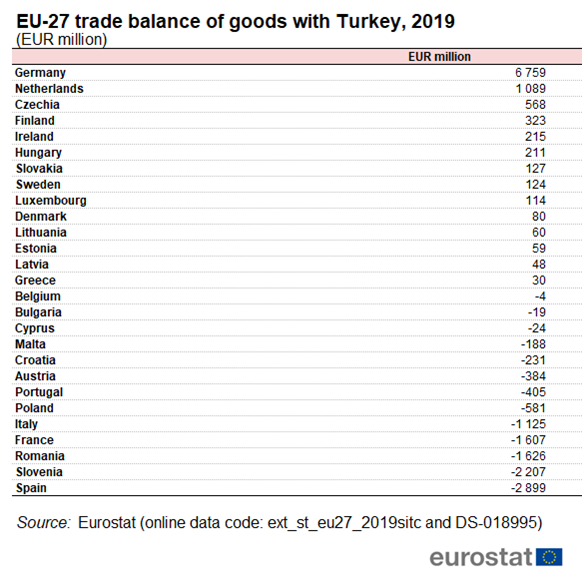 Methodology According to the EU concepts and definitions, extra-EU trade statistics (trade between EU Member States and non-EU countries) do not record exchanges involving goods in transit, placed in a customs warehouse or given temporary admission (for trade fairs, temporary exhibitions, tests, etc.). This is known as 'special trade'. The partner is the country of final destination of the goods for exports and the country of origin for imports.

Trade is an important indicator of Europe's prosperity and place in the world. The block is deeply integrated into global markets both for the products it sources and the exports it sells. The EU trade policy is an important element of the external dimension of the 'Europe 2020 strategy for smart, sustainable and inclusive growth' and is one of the main pillars of the EU's relations with the rest of the world.