GDP continues its moderate growth, together with industrial production, while inflation rises to a new record high level 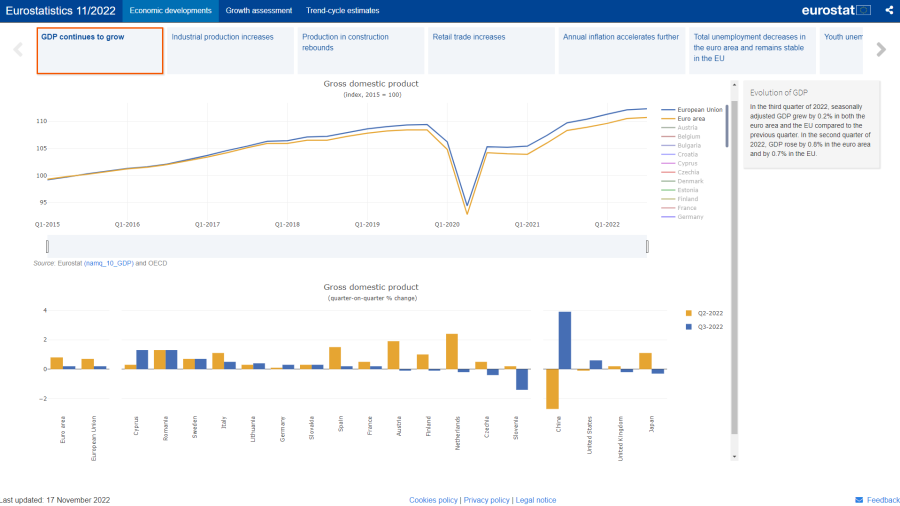 Click on the picture to see the visualisation tool

This monthly article gives a picture of the macroeconomic situation in the euro area, European Union, and Member States, showing the relevant indicators of production, demand, labour and prices based on Principal European Economic Indicators.

It is complemented by a visualisation tool (click on the picture above) offering additional indicators and interactive graphs linked to source data. Looking for the freshest information? You can find real-time data as graphs and tables in the Euro indicators dashboard with advanced functionalities to explore and download them.

Based on the figures available in November 2022, the economic situation in the euro area and the European Union (EU) is characterized by the following elements:

Both the euro area and the EU economies continue to grow but remained vulnerable to shocks in commodity markets, disruption of global supply chains and geopolitical uncertainty. The annual inflation rate in both the euro area and the EU again recorded a new all-time peak in October 2022. All this is reflected in economic sentiment which continued its sharp deterioration in October 2022 dropping further below its pre-pandemic level.

Situation in the euro area and the EU

In October 2022, the economic sentiment indicator (ESI) declined further in both the euro area and the EU by 1.1 points to 92.5 and by 1.5 points to 90.9 respectively. The recorded values in October are 12.5 points (euro area) and 14.5 points (EU) below the pre-pandemic level in February 2020. The drop was due to a significant weakening in services and industry confidence. 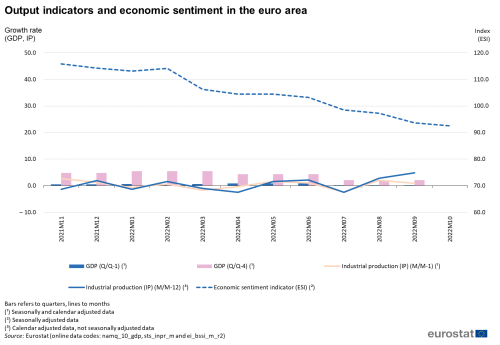 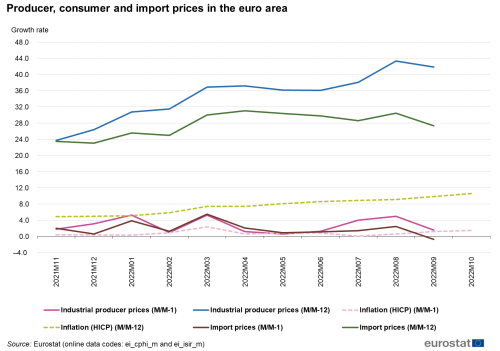 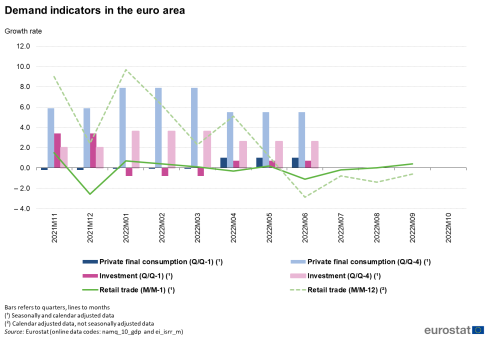 In the third quarter of 2022, the number of employed persons increased quarter-on-quarter by 0.2 % in both areas, according to Eurostat’s estimates. This follows increases of 0.4 % in both the euro area and the EU in the second quarter. Year-on-year, employment increased by 1.7 % and 1.5 % respectively. Hourly labour costs rose by 4.0 % in the euro area in the second quarter, compared to the same quarter of the previous year. In the EU, the increase was 4.4 %. In the previous quarter, the increases were 4.2 % and 4.5 % respectively.

Employment expectations, as measured by business and consumer surveys, decreased, but remained well above its long-term average. This decrease was driven by driven by worsened employment plans in industry, services and retail trade, while managers in construction expected employment in their firms to increase over the next three months. The Employment Expectations Indicator (EEI) decreased by 1.7 points to 104.9 in the euro area and by 1.8 points to 104.5 in the EU. 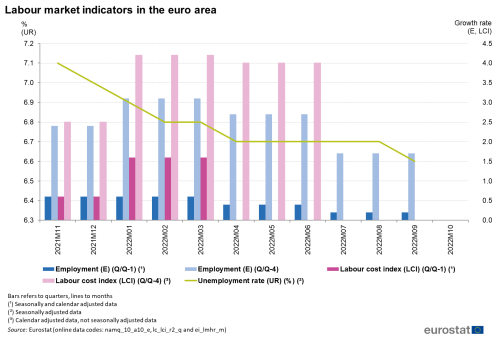 On 27 October 2022, the Governing Council of the European Central Bank decided to raise the three key ECB interest rates by 75 basis points, with effect from 2 November 2022.

In October compared to September, the monthly averages of the day-to-day exchange rates were the following: 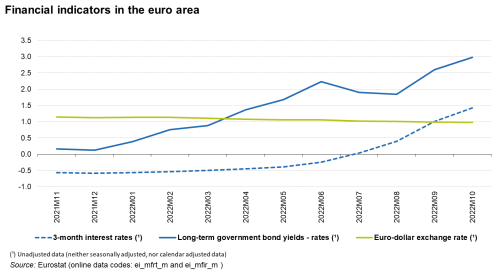 The autumn forecasts by the four international organisations European Commission (EC)[1], European Central Bank (ECB), Organisation for Economic Co-operation and Development (OECD) and International Monetary Fund (IMF) confirmed a further downward trend in the GDP growth outlook and an expected ascending trend in inflation for the last quarter of 2022, high average inflation in 2023, however an ease of inflationary pressure in 2023. Uncertainty, in particular related to gas supply disruptions, together with sharp increases in bank lending rates, are constraining economic activity.

Due to the complex economic situation, the assumptions underpinning the forecasts are subject to high a degree of uncertainty.

Read more under “Economy on a path of lower growth and higher inflation” in the visualisation tool.

Situation in the Member States

In October, the Economic Sentiment Indicator (ESI) increased in eight Member States and decreased in 17, while remaining stable in two countries. The ESI level varying substantially between them: from 68.2 in Denmark, 76.5 in Sweden, and 82.2 in Belgium to 105.2 in Croatia, 102.9 in Romania and 101.1 in Cyprus. The ESI is currently below its pre-pandemic level of February 2020 in all EU Member States.

The economy in Austria decreased moderately in the third quarter of 2022. The quarter-on-quarter GDP decline was -0.1 %. This follows an increase of 1.9 % recorded in the second quarter. Year-on-year, GDP grew by 1.8 %.

Industrial production dropped month on month by 2.1 % in September, after an increase by 6.1 % in August.

Economic sentiment decreased in October, down 2.0 points to 84.5, following a decrease of 1.0 point in September. The ESI has the sixth lower score among all Member States. It is currently 20.2 points below its pre-pandemic level of February 2020. The annual inflation rate reached 11.5 % in October, up from 11.0 % in September and 9.3 % in August.

The annual rate of growth of industrial producer prices reached 31.9 % in September, up from 30.4 % in August, and thus well below the euro area annual growth rate.

The volume of retail trade increased month-on-month by 3.9 % in September, following a moderate increase of 0.9 % in August.

Situation in the largest EU economies

Among the six largest EU economies (Germany, France, Italy, Spain, the Netherlands and Poland), Poland had the highest GDP growth rate in the third quarter 2022, while the Netherlands recorded negative growth. In October, the annual inflation decreased slightly in Spain and the Netherlands, while it increased in the other four countries. In the same month, the economic sentiment (ESI) showed a mixed picture. Unemployment remained stable in September, with the exception of France where it decreased slight to 7.1 % from 7.3 % in August.

However, industrial production decreased by 0.4 % in September, offsetting the moderate growth rate of 0.4 % in August.

The volume of retail trade increased by 0.2 % in September compared to the previous month, when it rose by 0.6 %.

The unemployment rate was 12.7 % in September, and thus remained stable compared to the two previous months. In September, approximately 2 978 000 men and women were unemployed in Spain, of which 522 000 were young persons (under 25).

Situation in the EFTA countries

In the second quarter of 2022, GDP increased in all three EFTA countries, with the highest increase recorded in Iceland (3.9 %). In Switzerland, annual inflation was very low in October (2.9 %) compared to the situation in the EU. Although inflation rates increased in Norway and Iceland, the recorded values were similar to the Member States experiencing the lowest rates within the EU. Unemployment rates remained low and stable in Norway and Iceland.

Situation in other non-EU countries

Data for non-EU countries come either from Eurostat’s datasets or from an external source, such as the OECD Main Economic Indicators (MEI) database or the OECD Public Sector Debt database.

Data for the euro area, EU and Member States

Data for Norway, Iceland and Switzerland

Data for China and Japan

The Principal European Economic Indicators, abbreviated as PEEIs, represent a comprehensive set of infra-annual macroeconomic statistics aiming to describe the economic and labour market situation as well as price developments in the euro area, the European Union and its Member States, which are of particularly high importance for economic and monetary policy.

The Communication of the Commission to the European parliament and the Council on Eurozone statistics “Towards improved methodologies for Eurozone statistics and indicators” of November 2002 has defined the list of PEEIs and their timeliness targets (amended in the 2008 EFC Status Report).

In 2002, Eurostat produced an initial list of 19 principal indicators, which has since been expanded to 22; they are published regularly and posted on a specific PEEI page on the Eurostat website. Since 2002, PEEIs have been regularly monitored and improved, in terms of coverage as well as timeliness. The list of indicators includes gross domestic product (GDP), private final consumption, external trade balance and three-month interest rates.