In the second quarter of 2022, according to the Business Cycle Clock, the deceleration and slowdown phases for the euro area economy are confirmed. Moreover, some recessionary signals for the euro area have been observed. Nevertheless, those signals need to be interpreted very cautiously due to a certain degree of instability of the BCCI caused by current high volatility of the IPI and by discordant behaviour of Member States.

The euro area continued to be in a descending phase of the growth cycle. This could be related to growing inflationary pressure and geopolitical instability caused by Russia’s military aggression against Ukraine.

The dating exercise, available until the first quarter 2022, has confirmed the deceleration phase for the euro area economy, together with few slowdown signals, however no recessionary ones. In particular, it is worth mentioning that even if some discrepancies between the cyclical indicators presented in the clock of the website and the results of the dating shown in the line chart might occur, the very good concordance rate between the two ensures that those are only temporary and not systematic. Furthermore, it should be recalled that the dating exercise is always lagged with respect to the cyclical indicators, which are providing an almost real-time picture of the economic situation.

The uncertainty characterizing the current business cycle signals require further investigation before confirming that the euro area is entering in a recessionary phase. The positive evolution of the GDP in the second quarter of 2022, together with a more uncertain behaviour of the IPI and a positive evolution of the unemployment rate are designing a complex framework difficult to analyse.

During the second quarter of 2022, the growth cycle coincident indicator (GCCI) was constantly around 1.00 meaning that the slowdown phase is continuing (see Figure 2). 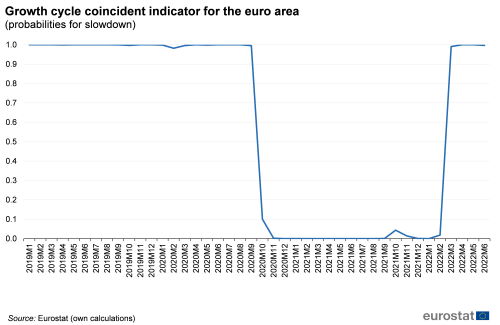 The acceleration cycle coincident indicator (ACCI) was decreasing from 0.99 in April to 0.76 and 0.73 in May and June, respectively, confirming the continuation of the deceleration phase for the euro area. 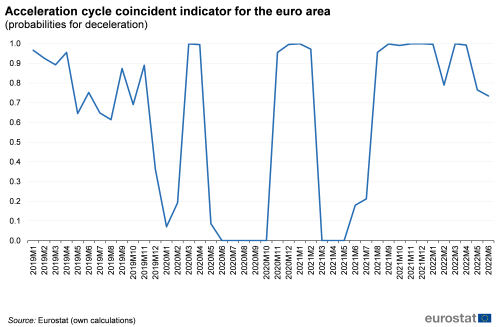 Figure 4: Acceleration cycle coincident indicator for the euro area
(probabilities for deceleration of the growth rate of the economic activity)
Source: Eurostat (own calculations)

The GCCI and BCCI are estimated using the following input variables:

The last two variables are from the Business and consumer surveys (BCS) conducted by the European Commission’s Directorate-General for Economic and Financial Affairs. The ACCI is estimated using the Economic Sentiment Indicator, a synthetic indicator from the BCS.

The main purpose of the Business Cycle Clock (BCC) is to complement the information contained in the euro indicators dashboard by extracting signals on the state of the economy. The BCC tool depicts in a visually appealing and intuitively understandable way cyclical developments in the euro area economy. The clock is structured according to the so-called αABβCD approach, which is based on an empirically observed sequence of turning points of the acceleration, business and growth cycles (see Figure 5). 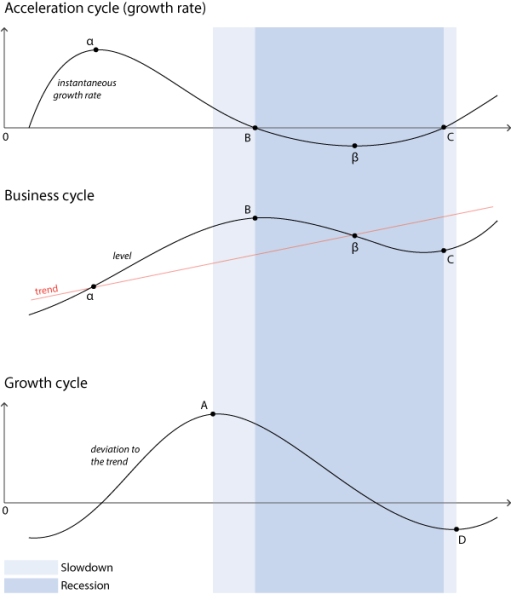 The business cycle is meant to reproduce the cycle of the global level of activity of an economy. The turning points of this cycle, named B for peaks and C for troughs, separate periods of negative growth (recessions) from periods of positive growth (expansions). The growth cycle can be defined as the deviation of the reference series (GDP for example) to the trend. The growth cycle has turning points named A for peaks and D for troughs. Peak A is reached when the growth rate decreases below the trend growth rate. Symmetrically, trough D is reached when the growth rate overpasses it again. The acceleration cycle, also called the growth rate cycle, relating to increases and decreases in the growth rate of the economic activity. The peak, turning point α, represents a local maximum of the growth rate. On the contrary, the trough (turning point β) indicates a local minimum of the growth rate. The acceleration cycle is characterised by the highest number of fluctuations and a high degree of volatility. The BCC tool is based on two complementary exercises: the dating system with the results shown in the line chart in the lower part of the tool and the detecting system with the results appearing in the clocks in the upper part of the tool (see Figure 6). 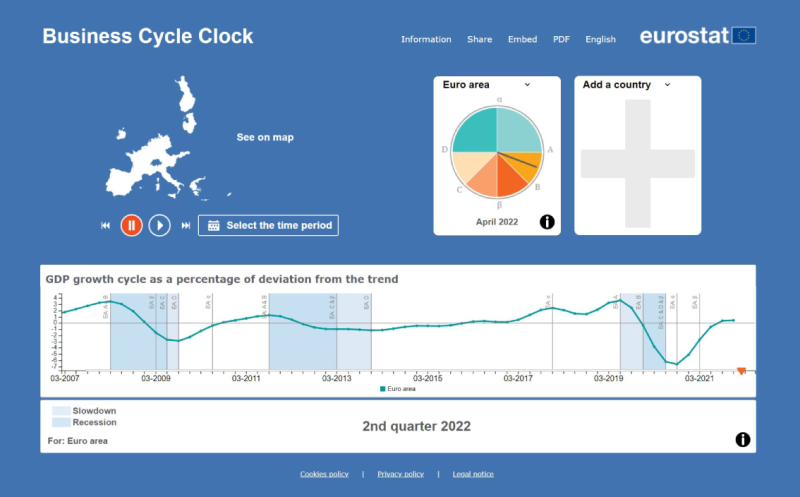 A multivariate Markov switching model is used to simultaneously estimate turning points for the growth and the business cycles. Turning points of the acceleration cycle are estimated independently by using a univariate Markov switching model. These estimations are carried out on a monthly basis. The location of the hand in the BCC tool is based on the values of the three cyclical coincident indicators for the acceleration, business and growth cycles, and in particular on their positioning with respect to the 0.5 threshold (see Table 1).

Table 1: How the clock hand position is computed

The clock has six sectors (see Figure 7), which can be interpreted as follows:

The names of the sectors are included in Figure 7. 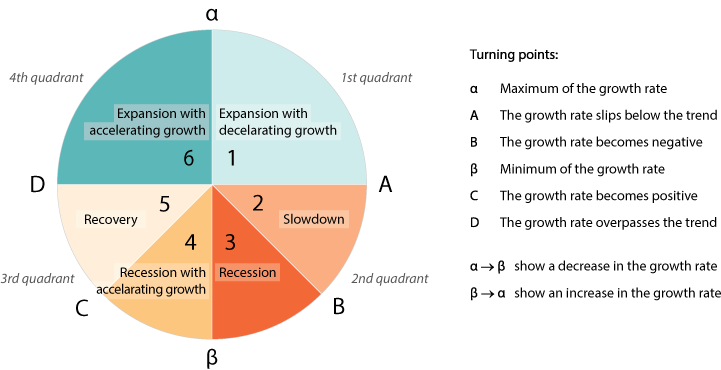 Figure 7: Cyclical phases indicated by the Business Cycle Clock in quadrants and sectors

The BCC and the cycle coincident indicators are presented in more details in several chapters of the Handbook on Cyclical Composite Indicators and Eurostat’s Business Cycle Clock – A user’s guide (see also Billio, Ferrara, Mazzi, Moauro (2016)[2], Billio, Ferrara, Mazzi, Ruggeri-Cannata (2016)[3], and Mazzi (2015)[4]). An overview of the methodology is also available in The Eurostat Business Cycle Clock: a complete overview of the tool (Ruggeri-Cannata (2021)[5]). Information on how the tool has been performing during the pandemic can be found in The Eurostat business cycle clock and the pandemic: Some considerations (Ruggeri-Cannata, Ronkowski (2022)[6]).