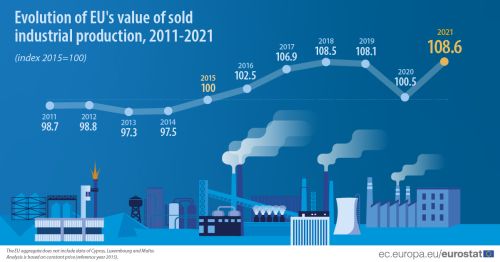 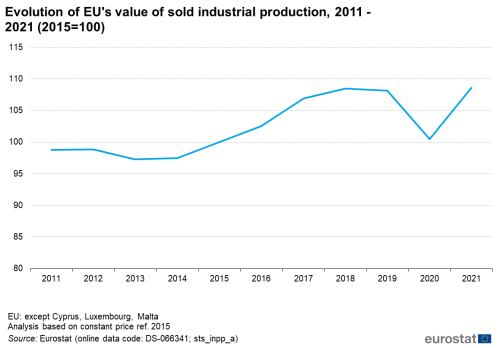 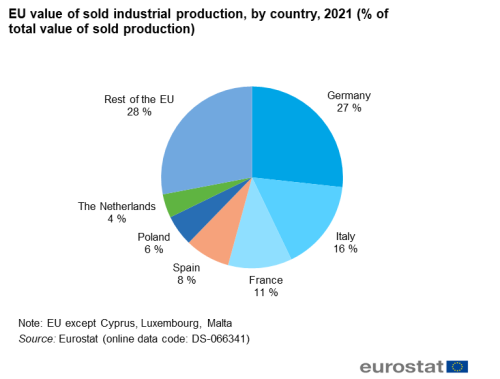 Looking in detail at the three largest manufacturing sectors within one country, Greece stood out with the manufacturing of food, beverages and tobacco activities, which represented 37 % of the country's total value of sold production in 2021. Croatia and Spain closely followed it with 27% each.

The highest share of the country's total value of sold production in the manufacturing of motor vehicles, trailers and semi-trailers and other transport equipment was reported by Slovakia with 42 %, followed by Czechia (29 %) and Hungary and Romania each with 26 %.

Germany is the substantial producer of all the three activities mentioned above (€160 billion, €196 billion and €267 billion respectively) in the EU.

The analysis that follows refers to the division breakdown (first 2-digit level) of the Statistical classification of economic activities in the European Community (NACE). In some cases, the results are presented as a group of divisions, i.e. Food, beverages and tobacco (Divisions 10, 11 and 12 of NACE Rev.2).

The value of sold production in almost all other manufacturing activities increased between 9 % and 60 % from 2011 to 2021 (in current prices). Looking into the smaller contributing domains, the manufacture of pharmaceutical products and pharmaceutical preparations had the highest increase (60 %) in 2021, compared with the 2011 value of sold production. 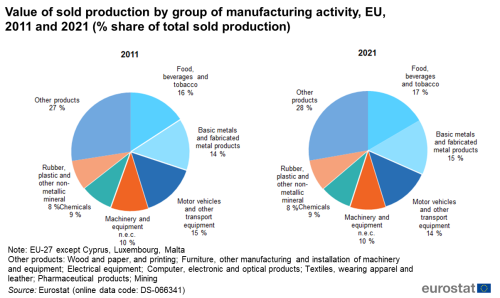 The analysis refers to the top five manufacturing activities presented at division breakdown (first 2-digit level) of the Statistical classification of economic activities in the European Community (NACE). 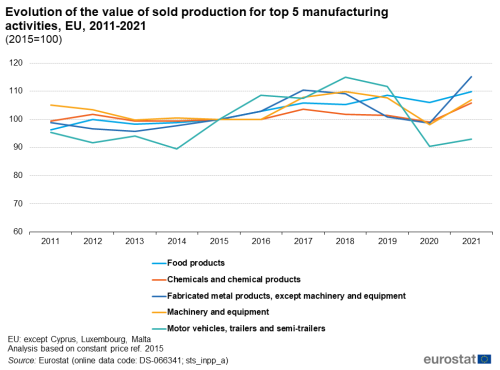 In terms of nominal value of the sold production all five activities recorded increase in 2021 compared with 2020 from 4 % to 24 %, out of which the manufacture of fabricated metal products, except machinery and equipment increased the most (with 24 % or €80 billion) and the Manufacture of chemicals and chemical products (with 23 % or €84 billion).

The results are detailed at four-digit level of the Statistical classification of economic activities in the European Community (NACE).

Figure 5 analyses the share of the value of sold production for the manufacturing of motor vehicles, trailers and semi-trailers (Division 29 of NACE Rev.2) in 2021. 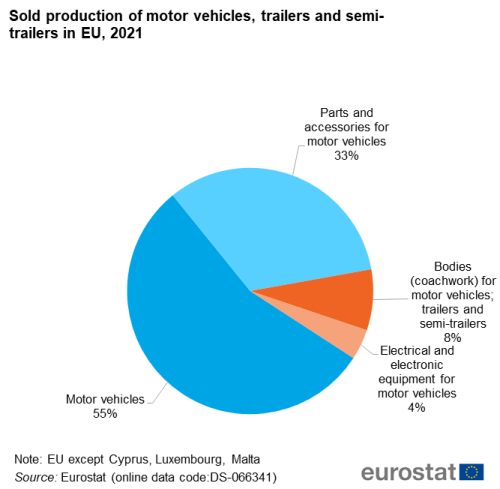 On average, one kilogram of fresh bread produced in the EU was sold for 1.71 Euro 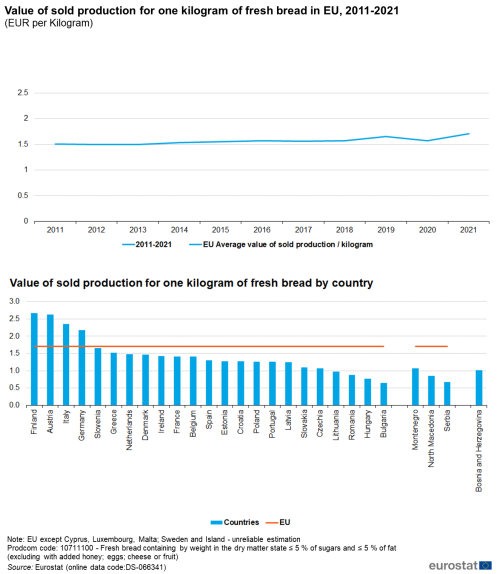 Finland was the country where one kilogram of fresh bread produced was sold at the highest price, over €2.6. In Italy, Austria and Germany the price was between €2.2 and 2.6. Rather low prices, of under €1 per kg, were observed in Lithuania, Romania, Hungary and Bulgaria. Bulgaria is the country with the lowest value of production sold, 65 cents/kg.

EU's production of pharmaceutical products increased in the last years

For the last 10 years, the production of antibiotics continued at the steady pace with a total sold production value €2 billion in 2021. The pro-vitamins and vitamins hit the highest point recorded in 2018, nevertheless the sold value dropped by half in 2021 to €2 billion. The antibiotics and vitamins represented 15 % of the total basic pharmaceutical production. 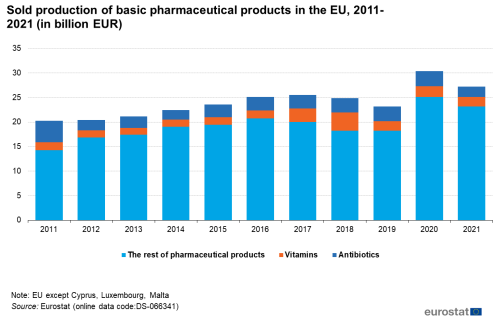 A look into the EU's production of wind turbines 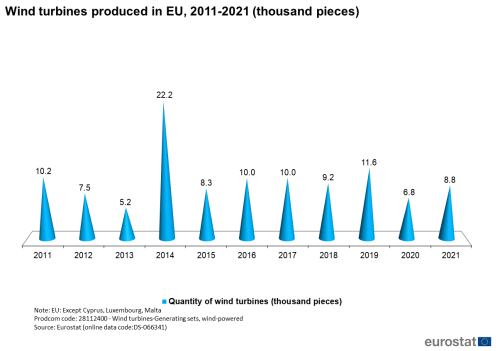 The production of wearing apparel decreased across EU 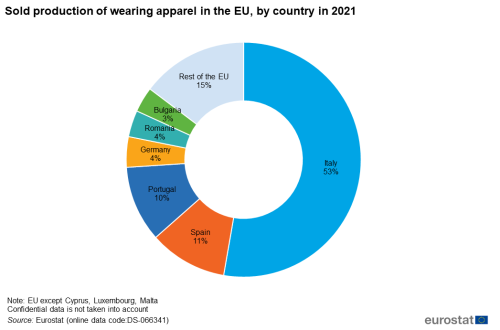 The Prodcom list is linked to the activity classification NACE and to the classification of products by activity (CPA): the first four digits of each Prodcom code refer to a NACE class, the fifth and sixth digits relate to a CPA sub-category, and the seventh and eighth digits are specific to the Prodcom list. Most headings correspond to one or more codes from the combined nomenclature (CN), a classification used for statistics on international trade in goods: some headings (mostly industrial services) do not correspond to a CN heading at all. The relationship with CN makes it possible to calculate apparent consumption by linking production statistics to international trade statistics.

The production surveyed covers only the production actually carried out on the territory of the reporting country. This means that the production of subsidiaries, which takes place outside an enterprise’s territory, is not included in the survey results for that country. As a general principle, when a production process takes as an input a material that does not match the description of the product, and produces as an output something that does, then production of the product should be recorded. If the processing of a product does not change the heading under which it is listed, it should not be recorded, since this would result in double-counting. This means that the link to turnover data is tenuous, since some activities do not result in new products and should not be recorded in Prodcom statistics.

Prodcom data are available for the EU Member States, Iceland, Norway, Montenegro, North Macedonia, Serbia and Bosnia and Herzegovina; Eurostat produces aggregates for the EU. According to the terms of the Prodcom Regulation, Cyprus, Luxembourg and Malta have derogations not to provide Prodcom data to Eurostat because of their size; as such there is no data for these three Member States in the database.

Data are available during the year following the reference year, with the first release of information usually taking place in July. As more complete and revised data become available, updates are released on a monthly basis.

The development of Prodcom dates back to 1985 when Eurostat organised a series of meetings on production statistics, whose objective was to harmonise the various ways industrial production statistics were collected in the EU Member States. Although statistics were collected on products in most countries, there was a varied selection of classifications in use reflecting national situations and a range of different survey methods were applied.

The Prodcom Regulation is designed to enable these national statistics to be compared and, where possible, aggregated to give a picture of the developments of an industry or product in the European context. This aim became more urgent with the creation of the single market in 1992 and the statistical system had to adapt.

Before data collection could begin, it was necessary to draw up a common list of products to be covered. Drawing up the Prodcom list was a unique opportunity for Eurostat, the national statistical authorities and the European trade associations to work together to produce a classification that would be understood by businesses and would be appropriate for national and European statistics. Industrial production statistics collected within PRODCOM serves as one of the data sources used in several policy areas of the European Commission and national administrations. Other users such as professional/trade associations and their members use PRODCOM statistics for information on industry. The use of the data in climate change statistics is increasing, as well as in other environmental statistics such as the analysis of material flows or chemicals production and consumption statistics.