Highlights
Tweet
In 2018, rail passengers transport in the EU was estimated at 472 billion passenger-kilometres, up 1.5 % from the previous year.
Tweet
Passenger transport by rail in the EU continued its growth in 2017 for the sixth successive year.

This article takes a look at recent annual and quarterly statistics on rail passenger transport in the European Union (EU). The article is based on data collected on the basis of Regulation Regulation (EU) No 2018/643 recast of Regulation (EU) No 2016/2032. After a period of sustained growth, rail transport performance in passenger-kilometres started to feel the effects of the economic crisis at the beginning of 2009. Rail passenger transport nevertheless remained less affected than rail freight transport, and registered a recovery from 2010 onwards.

Estimated at 472 billion passenger-kilometres in 2018, rail passenger transport performance at EU-28 level continued its increase by 1.5 % compared with 2017. A steady growth was observed between 2013 and 2018, with a growth in each quarter of six five years compared with the same quarter of the previous year, except in the second quarter of 2018. 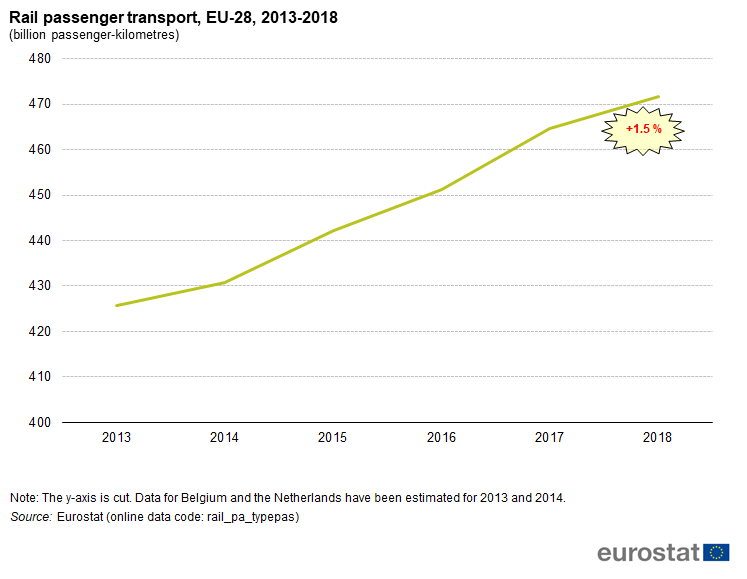 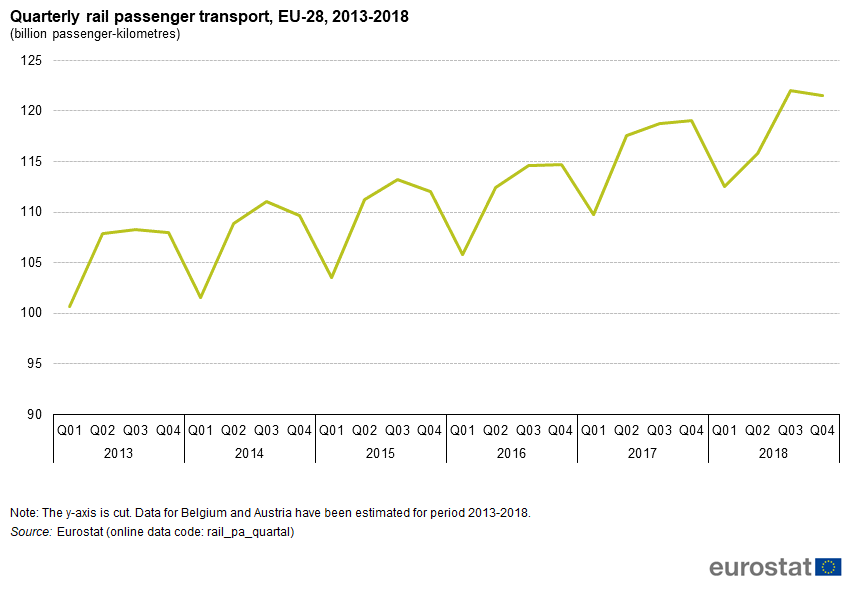 In 2018, national transport represented more than 70 % of total transport in all countries 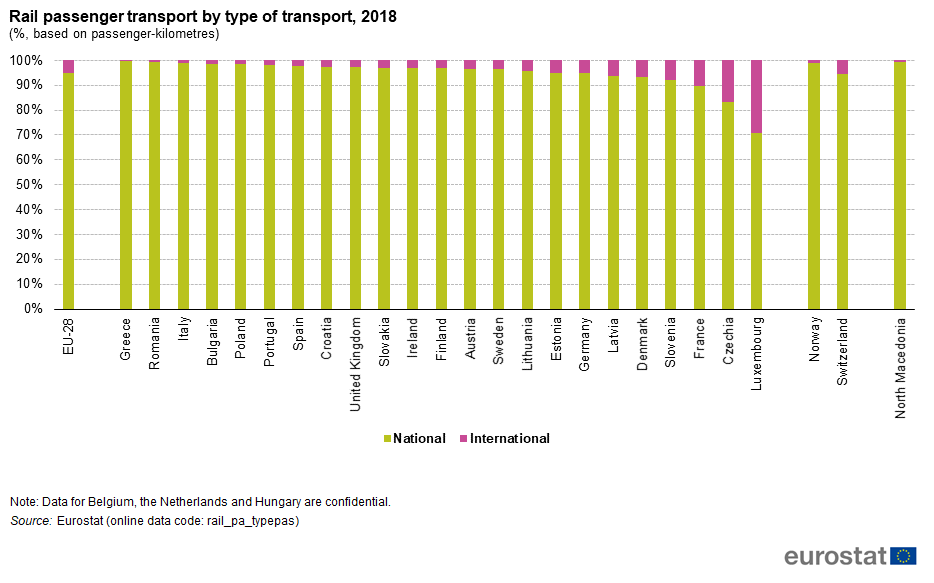 Although rail passenger transport performance (in passenger-kilometres) at EU-28 level recorded an increase in 2018 compared with 2017, seven Member States showed a decrease over the same period. The highest decrease among the EU-28 countries can be observed in Latvia (-14.1 %), followed by France (-3.4 %). In contrast, rail passenger transport performance in Estonia, Czechia and Ireland increased substantially by 13.8 %, 8.7 % and 7.5 %, respectively. Outside the EU-28, Montenegro and North Macedonia recorded the highest growths with +11.4 % and +7.0 %), respectively. 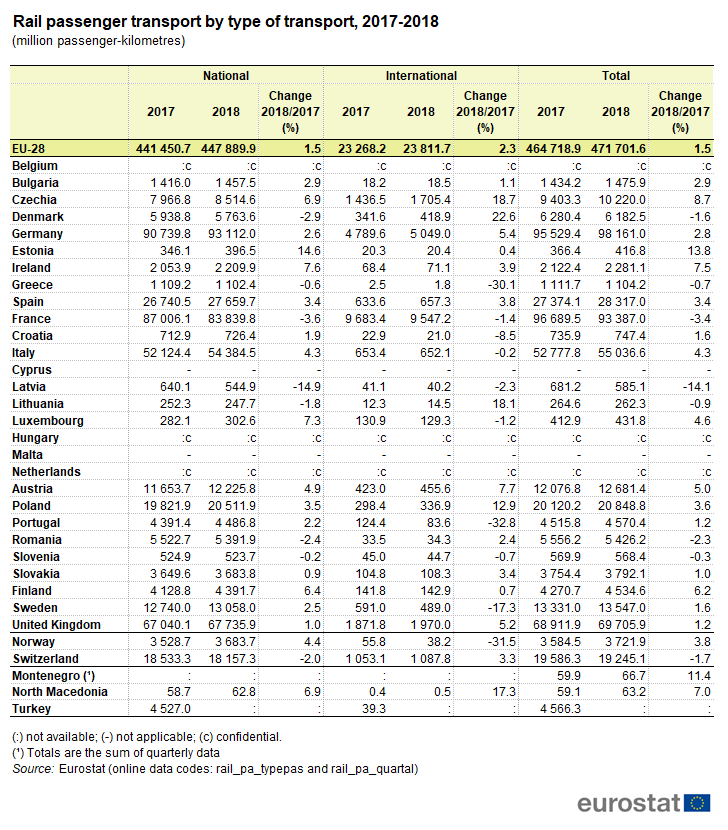 Number of passengers transported by rail increased in 2018

All in all, twenty of the EU-28 Member states reported increases in passenger transport (in number of passengers) between 2017 and 2018. The largest increases were recorded in Lithuania (+11.7 %) and Greece (+9.4 %). In contrast, the transport of passengers decreased by 3.9 % in Romania and 2.4 % in France. 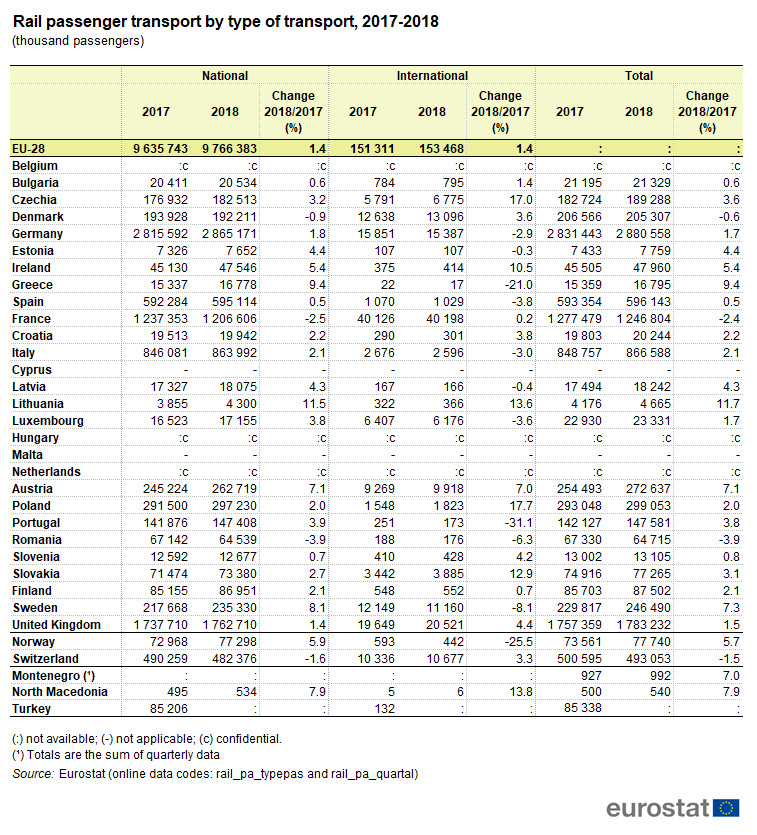 The figures presented in this article have been extracted from the Eurostat rail transport database. They include data on national, international and transit transport of the Member States, EFTA and Candidate countries, collected according to the Regulation (EU) No 2018/643 recast of Regulation (EU) No 2016/2032. The transport of passengers by metro, tram and/or light rail is excluded. The data presented are included in Eurostat’s dissemination database (reference tables are provided under each table and graph). There is no railway in Cyprus and Malta. The various elements present data collected under the detailed reporting system, meaning that data include only main undertakings which are defined as follows:

Railway undertakings which are below the thresholds may be included for some countries. Basic results and derived indicators (such as growth rates and shares in % of total) in the tables are rounded. However, the figures are based on the non-rounded original data. As a result, the sum of shares in % of total, as shown in the tables, is not necessarily equal to 100 %. Explanatory notes for countries are available in the metadata on the Eurostat website Symbols