This article presents the main trends in rail passenger transport in the European Union (EU), and the EFTA countries Norway and Switzerland as well as the candidate countries Montenegro, North Macedonia and Türkiye . It covers quarterly and annual data for total railway transport. This article, together with the article Railway freight transport statistics presents a complete overview of railway transport in Europe.

In 2021, the EU rail passenger transport performance partially recovered from the sharp drop in 2020

Between 2015 and 2019, the demand for passenger transport steadily increased, leading to an overall 10.2 % increase between 2015 and 2019, when a peak of 414 billion passenger-kilometres (pkm) was registered (see Figure 1). This upward trend was abruptly reversed in 2020 with the spread of the COVID-19 pandemic. As the result of strict precautionary measures and a reduced number of trains in operation since March 2020, rail passenger transport reduced significantly in all EU Member States. Compared with the previous year, rail passenger transport performance almost halved in the EU (-46.0 %) reaching 224 billion pkm. Particularly significant were the drops in the second and the fourth quarters of 2020 (-73.7 % and -53.8 %) in comparison with the same period of 2019. 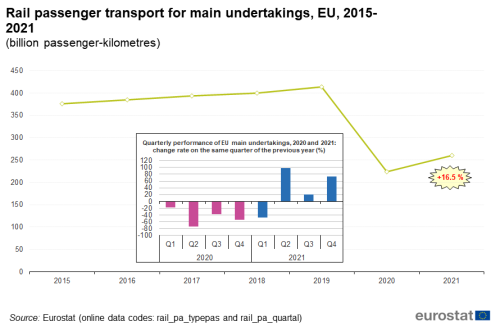 In 2021, all EU Member States were still severely impacted by the COVID-19 restrictions put in place in the EU and worldwide. Compared with their performance in 2019, all EU Member States recorded substantial decreases in terms of pkm in 2021 (see Figure 2). The highest decrease among the EU Member States, for which data is available, was observed in Ireland (-63.7 %), followed by Italy (-51.1 %) and Slovakia (-50.2 %). Among the remaining EU countries, seven recorded a decline by more than 40 % over the same period. A similar trend was observed in Norway, Montenegro and North Macedonia. In 11 EU Member States, Switzerland and Türkiye the drop was between 20 % and 40 %. Among all reporting countries, Slovenia registered the lowest decline, albeit still substantial, with -12.0 %.

When comparing 2021 with 2020, four EU Member States recorded a further decrease in their rail passenger performance: Latvia (-12.6 %), Slovakia (-7.7 %), Sweden (-1.3 %) and Germany (-0.5 %). Norway also recorded a decrease over the same period, by 11.3 %. In contrast, Slovenia and Spain recorded the highest growths over the same period (+48.9 % and +41.8 %, respectively). The performance in Türkiye and Montenegro also increased substantially by 40.2 % and 33.2 %, respectively. Among the remaining EU Member States, four recorded a growth of between 20 % and 35 % over the same period and five recorded a growth of between 10 % and 15 %. A more moderate increase was observable in six other EU Member States, with increases lower than 8 %. A similar trend was observed in Switzerland and North Macedonia. 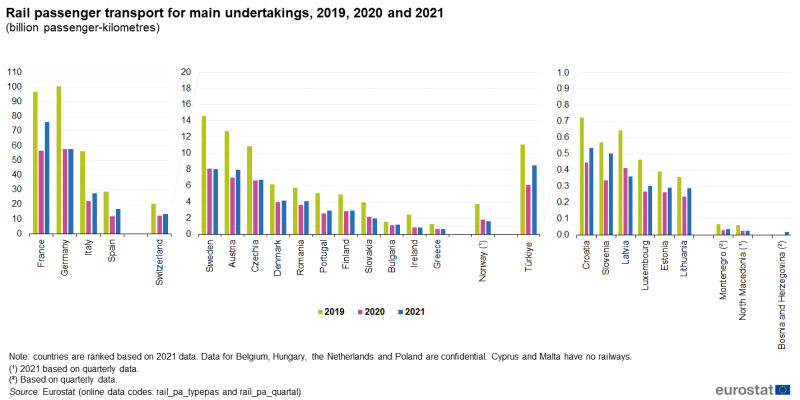 In 2021, France and Germany were the largest contributors to the rail passenger transport performance in the EU, with 75.9 billion pkm (or 29 % of the EU total rail passenger transport performance) and 57.5 billion pkm (or 22 %), respectively. At the other end of the scale, eight EU Member States recorded less than 1 billion pkm in 2021. The candidate countries Montenegro and North Macedonia, as well as the potential candidate Bosnia and Herzegovina, recorded less than 40 million pkm in 2021. 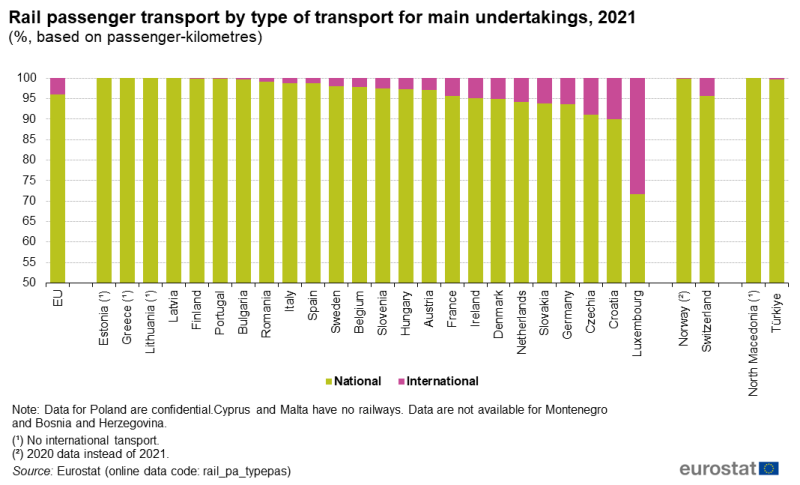 In 2021, Luxembourg and Denmark had the highest numbers of passengers per capita transported by rail

Similar to the rail transport performance, the effects of the COVID-19 pandemic were still noticeable in 2021 in the number of rail passengers transported (see Figure 4). When comparing with the pre-COVID year 2019, all EU Member States reported substantial decreases in the number of passengers transported by rail in 2021. The total EU rail transport at national level recorded a fall of 36.6 %. National transport registered 5.2 billion passengers in the EU in 2021 while it recorded 8.2 billion passengers in 2019. Just as for pkm, the largest decrease was recorded in Ireland, by 65.2 %. Among the remaining EU Member States, five fell by more than 40 % over the same period, and a similar development was observable in Norway, Montenegro and North Macedonia. In nine EU Member States and Switzerland, a drop between 30 % and 40 % was recorded and in six EU Member States and Türkiye, a drop between 10 % and 30 % was observed. 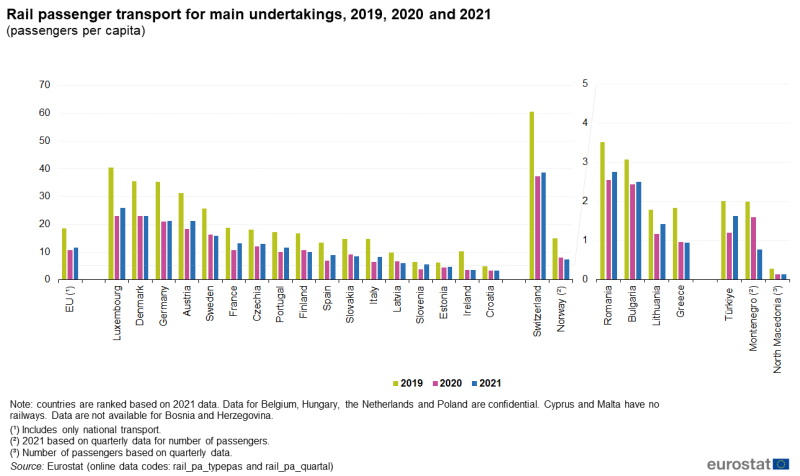 The figures presented in this article have been extracted from the Eurostat rail transport database. They include data on national, international and transit transport of the Member States, EFTA, candidate countries and potential candidates, collected according to the Regulation (EU) No 2018/643 - recast of Regulation (EU) No 2016/2032. The transport of passengers by metro, tram and/or light rail is excluded. The data presented are included in Eurostat’s dissemination database (reference tables are provided under each table and graph). There are no railways in Cyprus, Malta and Iceland. The various elements present data collected under the detailed reporting system, meaning that data include only main undertakings which are defined as follows:

Railway undertakings which are below the thresholds may however be included for some countries. Basic results and derived indicators (such as growth rates and shares in % of total) in the tables are rounded. However, the figures are based on the non-rounded original data. As a result, the sum of shares in % of total, as shown in the tables, is not necessarily equal to 100 %.

Due to confidentiality, the EU aggregate for passenger transport by rail cannot be disclosed for years before 2015. That is why the data series presented in this article start in 2015 and not in 2010 as in the article Railway freight transport statistics.