Performance of the agricultural sector 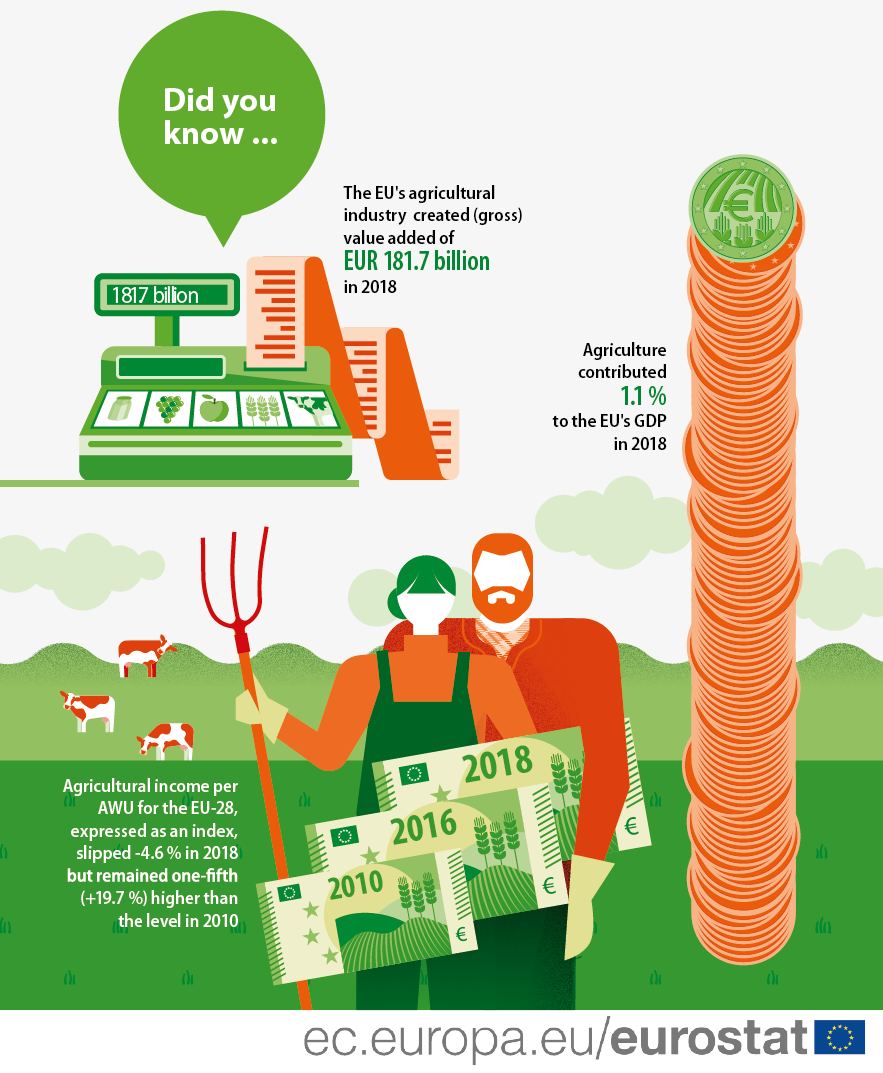 Agriculture is an activity that falls within the primary sector of the economy, which is concerned with the extraction or harvesting of products from the earth. In an accounting context, an industry is a branch of economic activity. The term 'agricultural industry' is used to describe the branch of agricultural production but it should not be understood as inferring that agriculture is industrialised or that it is about the processing of raw materials. Indeed, the food and beverages processing industry is analysed in Chapter 7 of the publication Agriculture, forestry and fishery statistics.

In this article, the term 'agricultural industry' is used only where precise accounting terms are required, with 'agricultural sector' being used elsewhere.

Agricultural production in the EU by the millions of predominantly small farms adds up to being big business, even without considering its importance as the key building block for the downstream food and beverages processing industry. The agricultural sector contributed EUR 176.9 billion towards the EU's overall GDP in 2018. To put this in some context, the contribution of agriculture to the EU's economy was only slightly less than the GDP of Greece in 2018, the seventeenth largest economy among the Member States.

The agricultural industry created an estimated added value of EUR 181.7 billion in 2018

The gross value added by the EU’s agricultural industry, which is the difference between the value of everything that the EU’s primary agricultural sector produced in 2018 and the costs of the services and goods used in the production process, was an estimated EUR 181.7 billion in 2018. One way of looking at this is that for every 1 euro spent on the cost of goods and services used in the production process (known as intermediate consumption), the agricultural industry created added value of EUR 0.72. Whilst this relative value added was lower than the EUR 0.77 in 2017, it was still higher than all the other years since 2008.

The value of the output produced by the EU's agricultural industry was an estimated EUR 434.3 billion in 2018

The value of everything that the EU's agricultural industry produced in 2018 was an estimated EUR 434.3 billion; this includes the value of crops, of animals, of agricultural services as well as of some goods and services that were not strictly agricultural but which could not be separately measured.

About one half (51.8 %) of the value of the total output of the EU's agricultural industry in 2018 came from crops (EUR 224.9 billion), within which vegetables and horticultural plants and cereals were the most valuable (see Figure 1). A further two fifths (39.6 %) came from animals and animal products (EUR 172.0 billion), a majority coming from just milk and pigs. Agricultural services (EUR 20.8 billion) and inseparable non-agricultural activities (EUR 16.6 billion) contributed the rest (8.6 %). 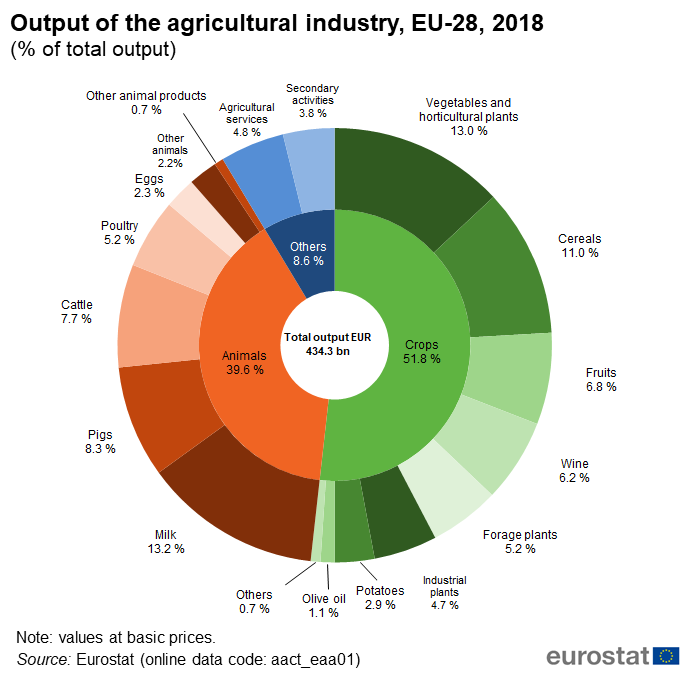 Contributions from Member States varied significantly, reflecting differences in volumes produced, prices received as well as the mix of crops grown, animals reared, animal products collected and services offered. More than one half (55.0 %) of the total output value of the EU's agricultural industry came from the 'big four' of France (EUR 77.2 billion), Italy (EUR 56.9 billion), Germany (EUR 52.7 billion) and Spain (EUR 52.2 billion). About another one quarter (23.4 %) came from the combined output of the United Kingdom (EUR 29.8 billion), the Netherlands (EUR 28.2 billion), Poland (EUR 25.0 billion) and Romania (EUR 18.6 billion). Three-quarters (78.4 %) of the total value of EU's agricultural industry in 2018 came from these eight Member States.

Intermediate consumption costs for the EU's agricultural industry were an estimated EUR 252.6 billion in 2018

Producing all this output incurred costs. Farmers had to make purchases of goods and services to be used as inputs in the production process; they bought things like seeds, fertilisers, animal feedingstuffs and fuel for their tractors as well as veterinary services, among other things. These input costs are termed 'intermediate consumption' in an accounting context. Intermediate consumption costs for the agricultural industry came to a total of EUR 252.6 billion for the EU as a whole in 2018.

Some costs are associated with the farming of animals; they required feed, which accounted for over one third (37.3 %) of total intermediate consumption costs, and veterinary services (a further 2.6 %). Likewise, some costs are associated with crop farming; farmers required seeds and plants (5.1 % of total costs), many used plant protection products, such as herbicides, insecticides and pesticides (4.9 %) and fertilisers and soil improvers (6.6 %). Other costs are common to all types of farm, independent of whether specialist or mixed-type.

Although the value of agricultural output in 2018 was slightly higher (+0.6 %) than in 2017, the cost of the intermediate goods and services used increased at a faster rate (an estimated +3.8 %), resulting in an estimated decline (-3.5 %) in the gross value added generated by the agricultural industry from its peak level in 2017. 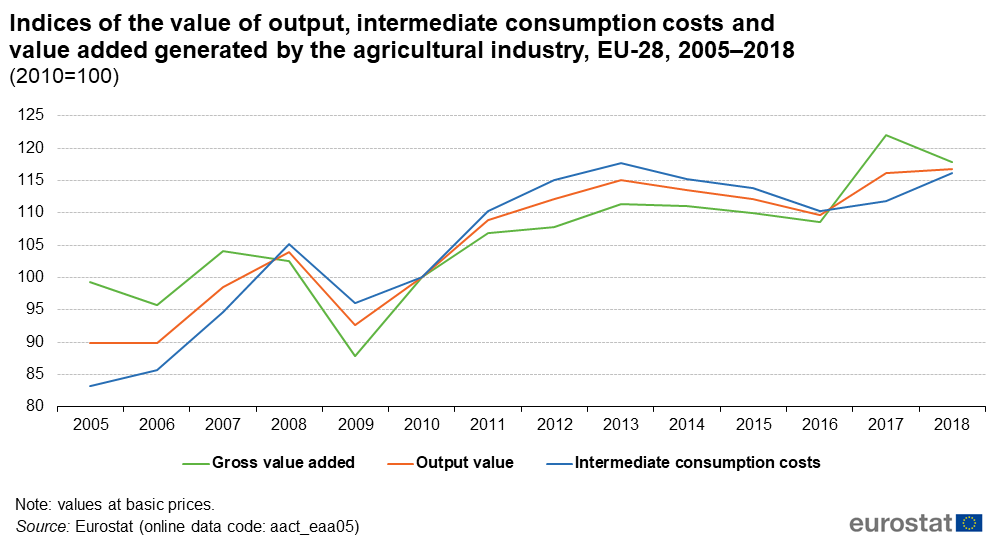 The performance of the agricultural industry can be measured in terms of net value added at factor cost, which is gross value added adjusted for the consumption of fixed capital, and subsidies and taxes on production. It is also known as factor income, as it is the remuneration available for all the factors of production.

Factor income in the EAA can be expressed per full-time labour equivalent. As such, it is considered a partial labour productivity measure; it is a measure of the net value added by the equivalent of each full-time worker in the agricultural industry. This indicator of performance is measured in real terms (adjusted for inflation) and expressed as an index. It should not be confused with total income of farming households or the income of a person working in agriculture.

To understand the development of this agricultural income measure, it is first necessary to understand the development of the agricultural labour amongst which this remuneration is notionally shared. With so much part-time, seasonal and unsalaried labour input in agriculture, the amount of work actually carried out in farming activities is best described when using a unit called the Annual Work Unit (AWU). This unit expresses the volume of work done in full-time work equivalents.

Agricultural labour input in the EU was the equivalent of an estimated 9.3 million full-time workers in 2018. These are the notional workers that are remunerated with agricultural income. 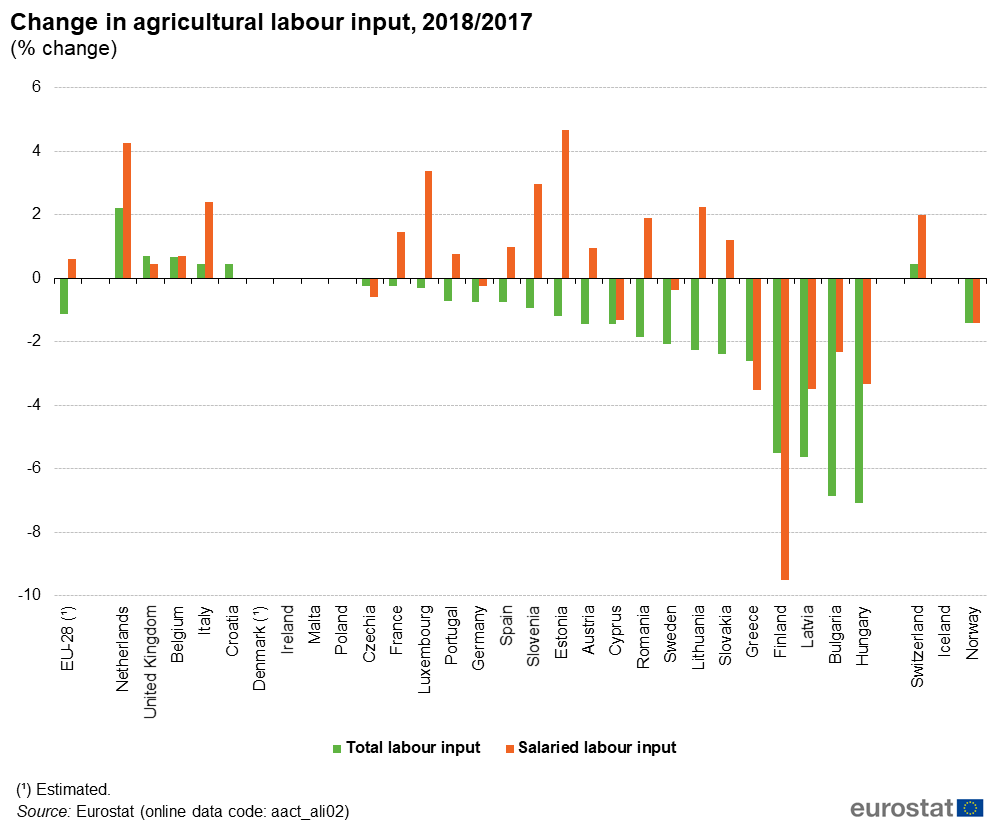 There has been a long-established downward trend in the number of people working in the EU’s agricultural sector; during the period between 2005 and 2018, the average rate of decline in the volume of agricultural labour used across the EU as a whole was -2.5 % per year. Although the downward trend continued in 2018, the rate of decline (-1.1 %) was slower than the trend average.

Over the long-term, the volume of agricultural labour has been in steep and steady decline

The volume of total agricultural labour declined sharply in almost all Member States during the period between 2005 and 2018 (see Figure 5); the sharpest declines were in Bulgaria (an average -7.7 % per year), Slovakia (-6.3 % per year), and Latvia (-5.0 % per year). This contraction in the agricultural labour force reflected both push and pull factors; there have been great strides in mechanisation and efficiency on the one hand and, on the other, a wider choice of attractive job opportunities in other sectors of the economy. The main exceptions to this general trend were Malta (an increase of +1.0 % per year on average) and Ireland (+0.6 % per year on average). 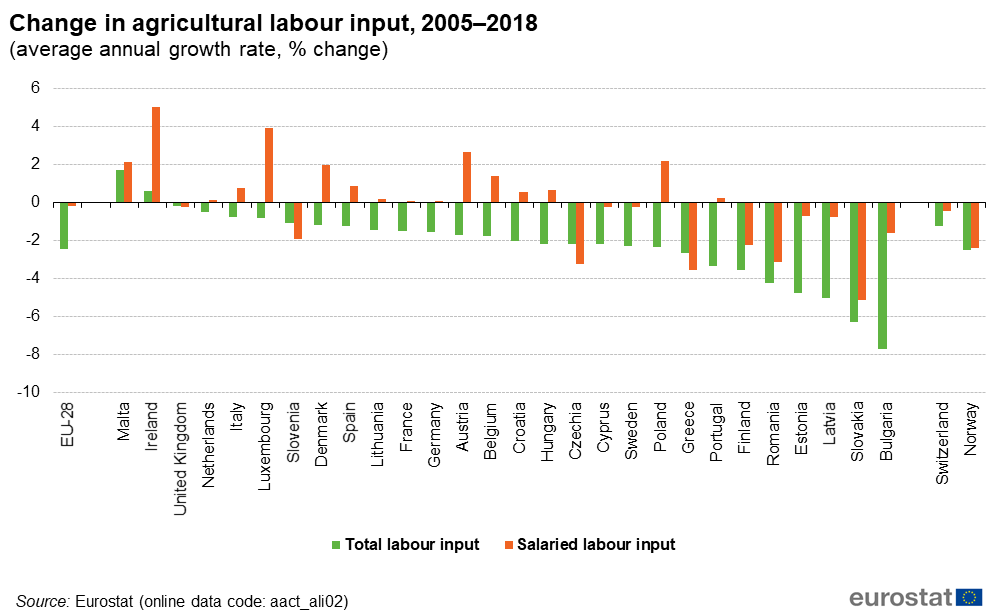 Agricultural income, as defined by deflated (real) factor income per Annual Work Unit and expressed as an index (called Indicator A), for the EU as a whole was an estimated -4.6 % less in 2018 than it was in 2017. This reflected a slightly stronger rate of decline (-5.7 %) in factor income that was notionally shared amongst a smaller agricultural labour input (-1.1 %). 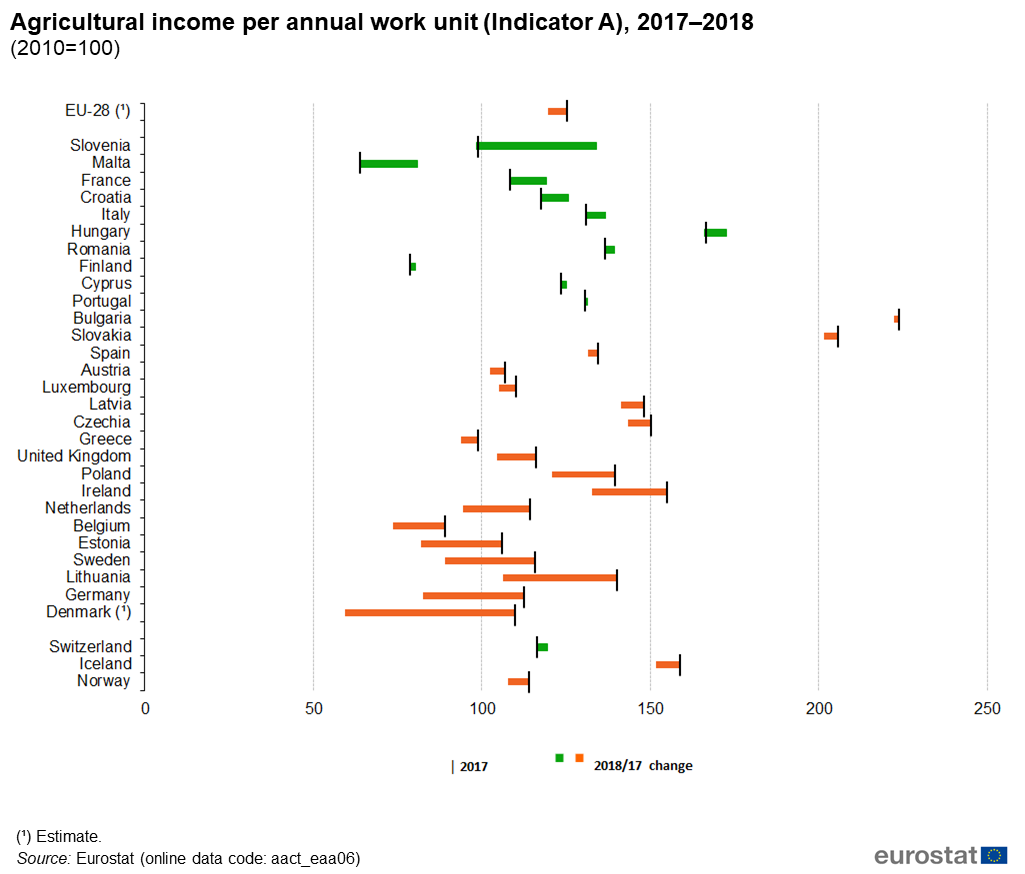 Agricultural income per AWU for the EU as a whole in 2018 fell back from the high recorded in 2017. This mirrored the development in factor income, with the shrink in agricultural labour input continuing. Nevertheless, it remained about one fifth higher (+19.7 %) than the level in 2010. 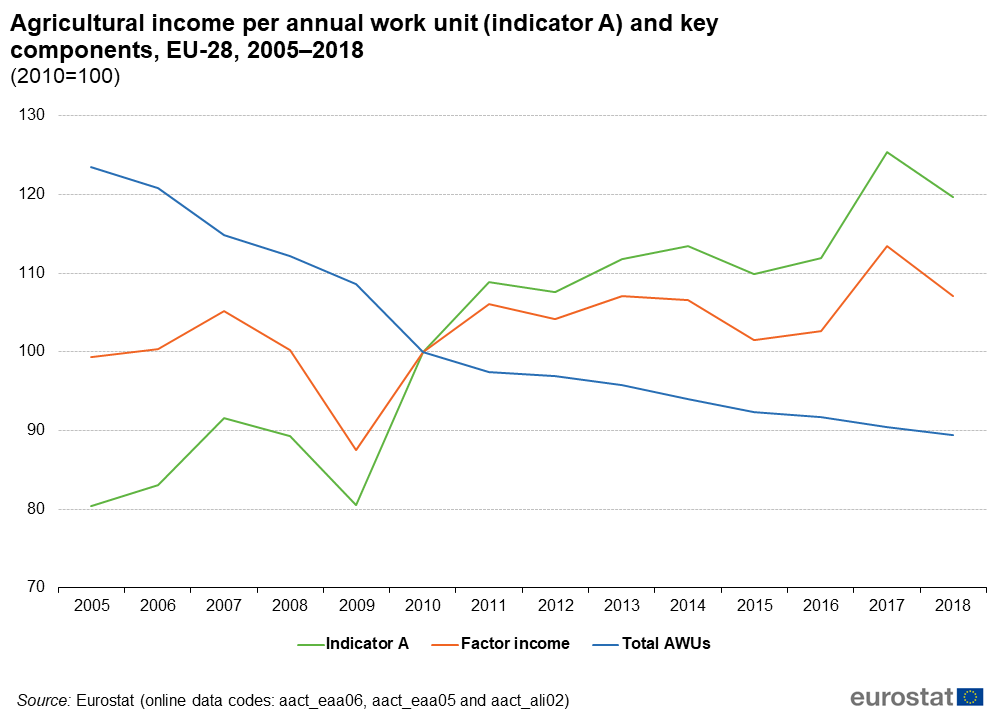 Resource performance of the agricultural sector

There is increasing interest in the efficiency with which resources are used [1]. In order to become more sustainable, an economy would need to decouple economic growth from resource use and its environmental impact.

One area of focus is the links between farming activities and the environment; there is scrutiny of the impact of agricultural activity on water, air and soil quality, land use diversity, ecologies and wildlife. Indicators to monitor many of these impacts are being developed as part of the Sustainable Development Goals (SDGs). It is proposed that the future common agricultural policy (CAP) specifically includes objectives on climate change action, environmental care and the preservation of landscapes and biodiversity.

Another area of interest is addressing prices that reflect the real costs of resource use. The social and environmental outputs of farming activities are rarely priced; indeed so-called ‘green accounts’ for agriculture are far from being completed nor the green efficiency indicators that could result from them. Likewise, total factor productivity indicators for agriculture that look at a measure of agricultural output against a combined measure of the input from intermediate consumption, land, labour and capital are also not yet available.

Some indication of the resource performance of agriculture, however, can be derived from the EAA by looking at trends in the ‘volumes’ of outputs generated and of the goods and services used up or ‘consumed’ as inputs in the production process can be derived. These volumes come from a decomposition of the values into price and volume components. These implicit volumes are not quantities; they are not measured in terms of kg or tonnes. They are termed ‘volumes’ because they capture not only changes related to quantity but also to quality as well as composition, which is important to bear in mind. As indices, they provide an overview of the trends in the volumes of inputs and outputs, which can be used for some productivity and performance measures.

Over the reference period between 2005 and 2018, there was a relatively steady upward trend in the output volume of the EU’s agricultural industry (a total +9.4 %). To a large extent, higher output volumes were mirrored by the greater volume (+7.9 %) of input goods and services consumed (see Figure 8). As such, intermediate consumption growth has largely been in line with overall agricultural output growth in the EU. This suggests that there is yet to be any decoupling of output growth from resource use at the EU level. 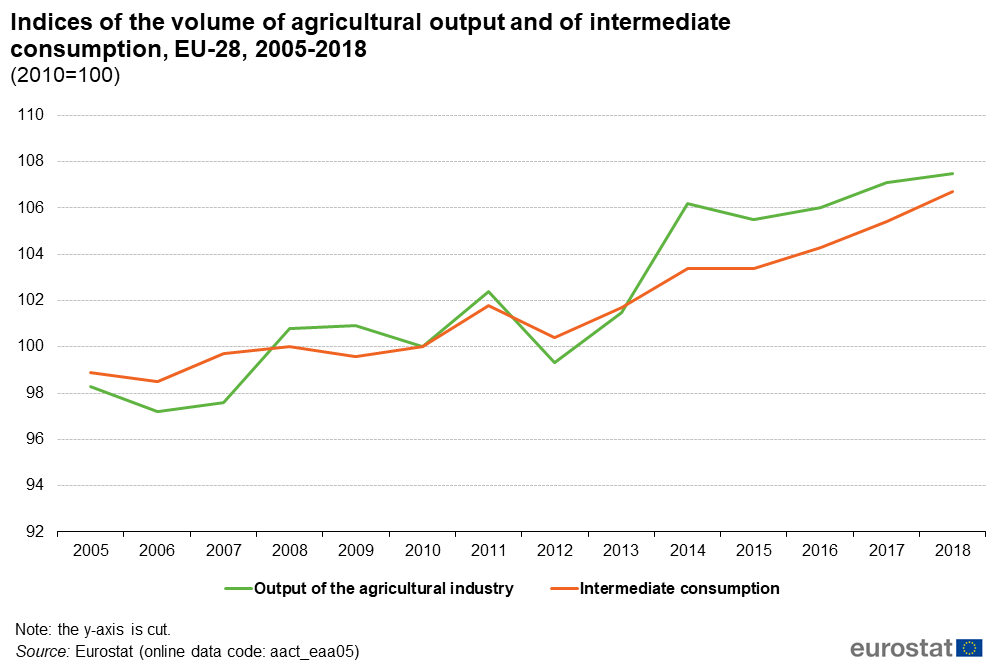 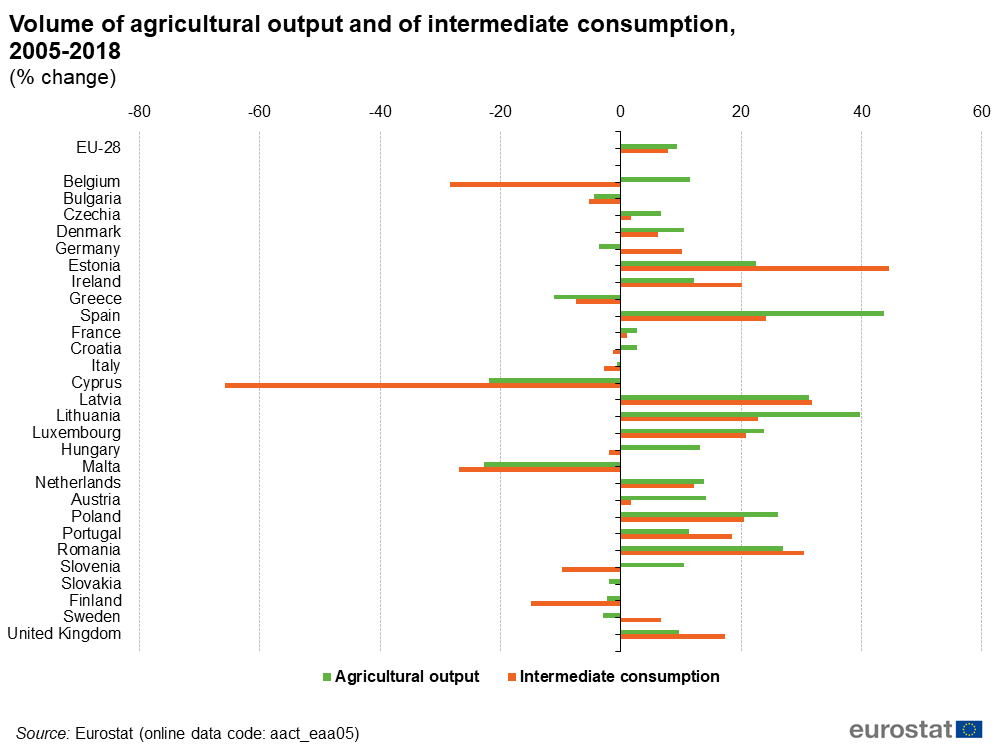 The output of agricultural activity includes output sold (including trade in agricultural goods and services between agricultural units), changes in stocks, output for own final use (own final consumption and own-account gross fixed capital formation), output produced for further processing by agricultural producers, as well as intra-unit consumption of livestock feed products.

Three indicators are computed in relation to agricultural income:

Similarly the prices paid by farmers for their means of production should be recorded at the last marketing stage, that at which the items arrive on the farm, so as to best indicate the purchase prices paid by farmers. It is assumed, by convention, that the fertilisers and feeding stuffs purchased are used in the same production period and that there are no stocks on farm.

As regards spatial comparisons, the structure of the weights with respect to products and means of production reflect the value of the sales and purchases in each country during the base year (currently 2010=100); the weights therefore differ from one country to another.

The performance of the agricultural sector has traditionally been about how successful farming is in delivering primary agricultural products and services. However, it is increasingly taking on a green aspect, recognising the impact of agriculture on water, air and soil quality, land use diversity, ecologies, wildlife and climate change.

Assessing the performance of the agricultural sector matters for a number of reasons:

The performance of the agricultural sector as a whole can be conducted by bringing the information about the volume and price changes for agricultural goods and services under the umbrella of an accounting structure. To this end, the Economic Accounts for Agriculture (EAA) provide a set of comparable data that provide an insight into: