The market share of the largest natural gas import and production companies in the EU were 100 % in Estonia and Finland and 89 % in Poland in 2018. 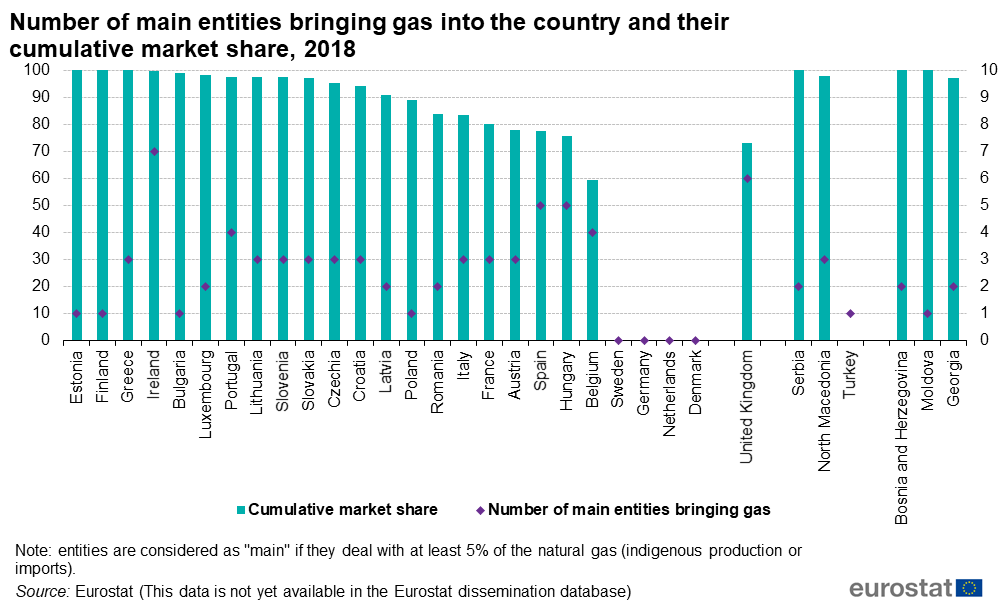 Number of main entities bringing gas into the country and their cumulative market share, 2018

This article takes a look at the natural gas markets in the European Union (EU) (excluding Malta and Cyprus) presenting recent statistical data on the number and activities of companies that either bring natural gas into the country by importing it or by national production (IMport and PROduction  = IMPRO) and retail companies across EU Member States, the United Kingdom, Serbia, Turkey, Bosnia and Herzegovina, North Macedonia, Moldova and Georgia.

During the period 2003-2010, the number of main companies with a market share above 5 %, that either produce natural gas by national production or bring natural gas into the country (IMport and PROduction = IMPRO) increased from 47 to 68 companies. They are now stabilised around 62 companies reported + 7 estimated for the countries that did not report the data (Denmark, Sweden and Germany). The data for the Netherlands is confidential since 2003 and has not been counted in these numbers. 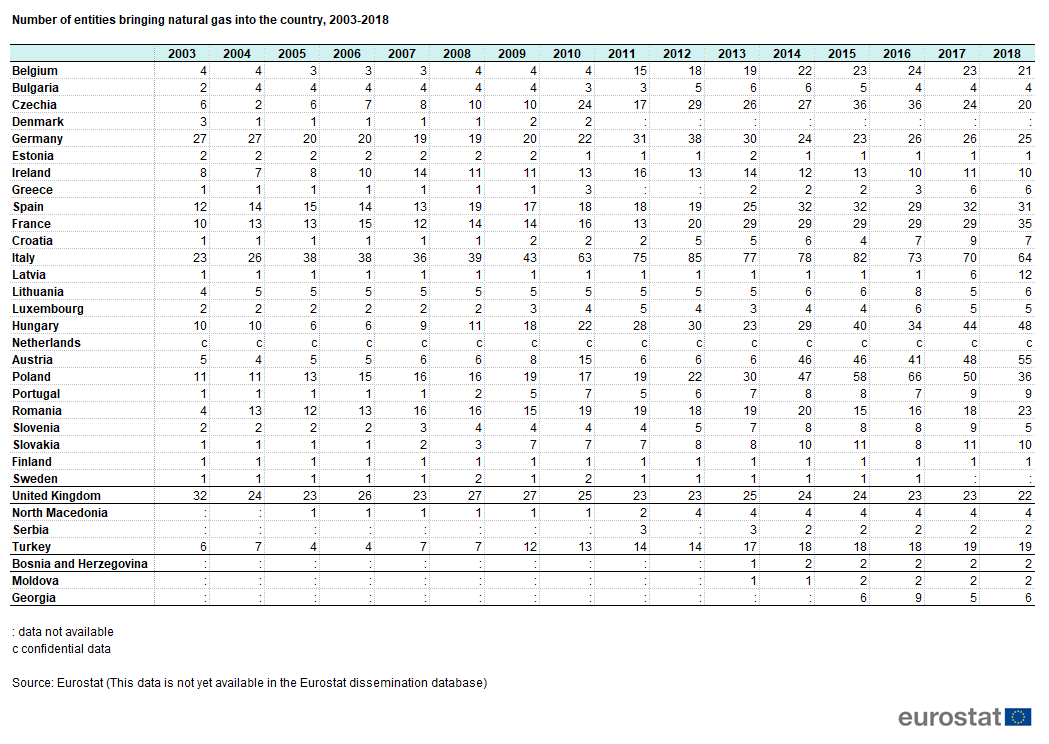 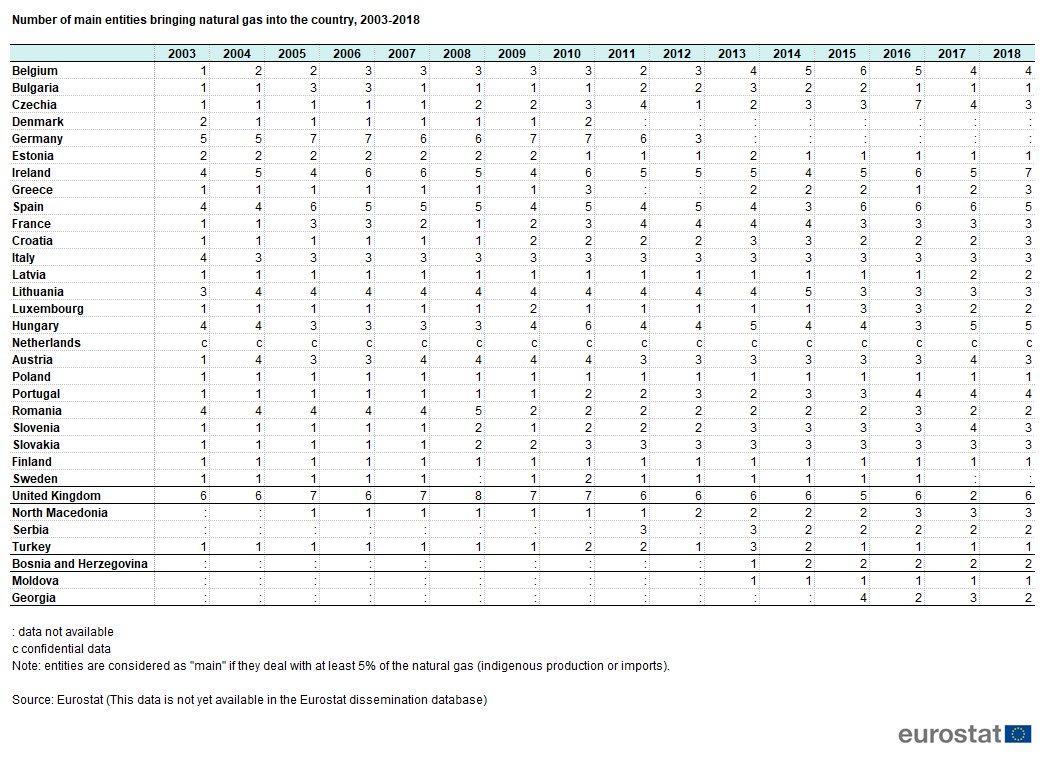 Figure 1 displays the cumulated shares of main IMPRO companies in a given country having a share of at least 5 % of their respective national markets. The lowest market coverage of IMPRO companies was reported by Belgium (60 %), which means that about 40 % of their total national gas market is covered by relative small IMPRO companies.

Figure 1: Number of main entities bringing gas into the country and their cumulative market share, 2018 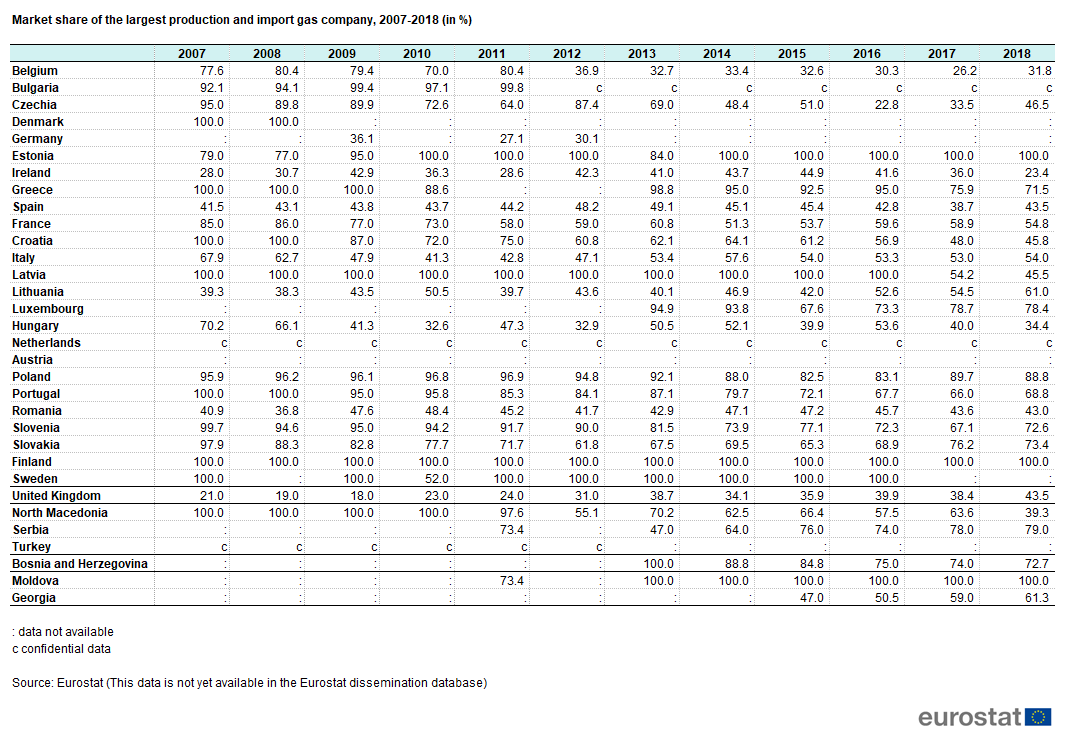 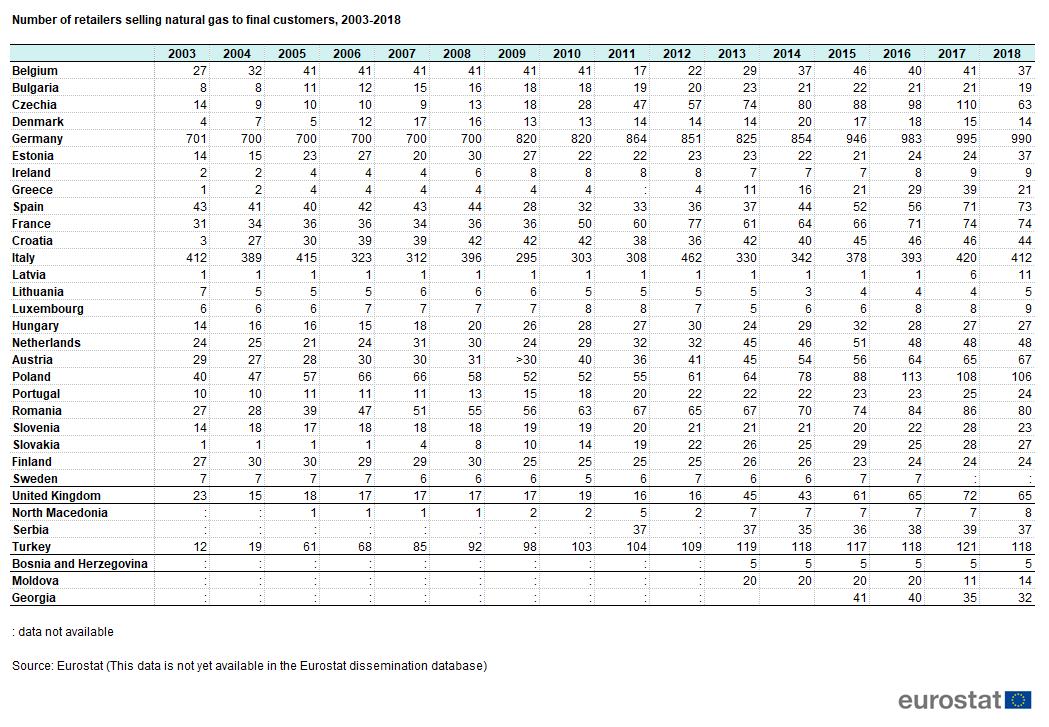 Table 5 shows the number of main retailers (retailers are considered as "main" if they sell at least 5 % of the total national natural gas consumption). The figures remained quite stable at around 90 companies for the last decade but increased to more than 105 companies in 2018 (using estimated data for Sweden). Six main retailers can be found in eight of the 24 countries having reported the data. Markets where only one main retailer is dealing with the sales of natural gas were registered in Estonia and Finland. 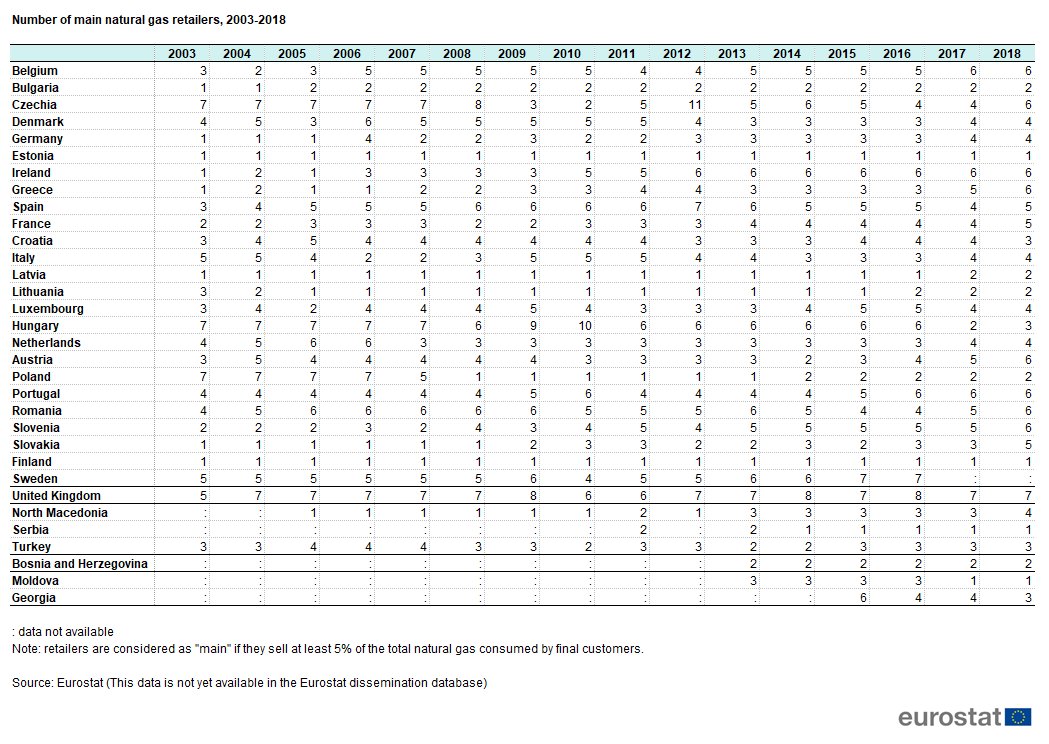 Figure 2 illustrates the cumulative market shares of main natural gas retailers for the EU Member States available as well as the United Kingdom, North Macedonia, Turkey, Serbia, Bosnia and Herzegovina, Georgia and Moldova. If one looks to the remaining retail-market, which is the market that is covered by non-main retail companies that have a market coverage of less than 5 %, this market for "minor" retail companies is the largest in Germany (56 %). The market for "minor" retail companies is equal to or below 10 % in nine out of 24 EU Member States that reported this information. 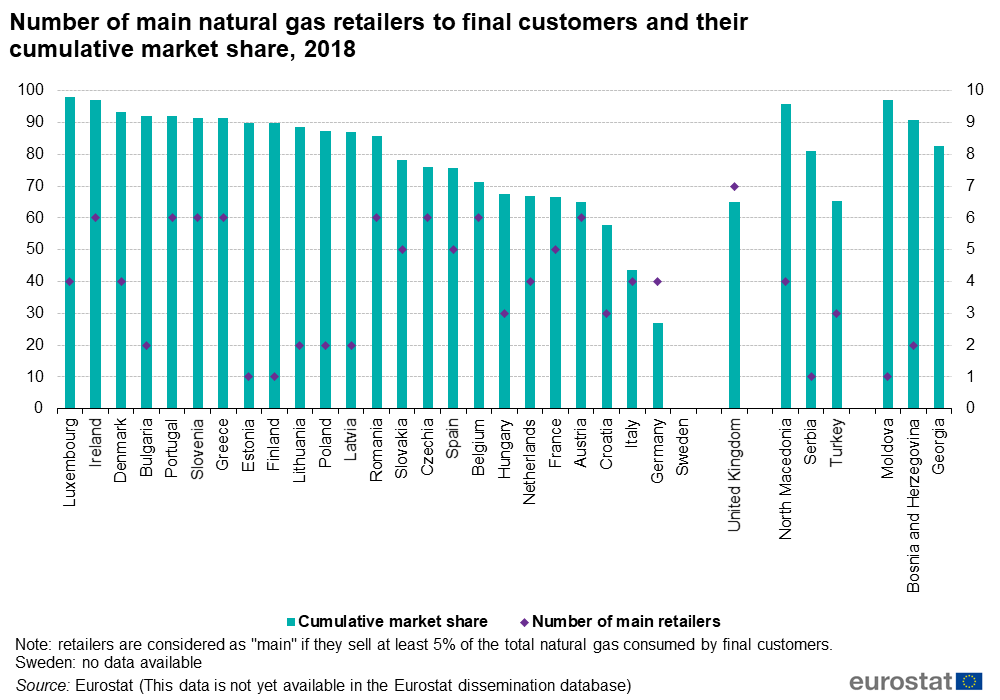 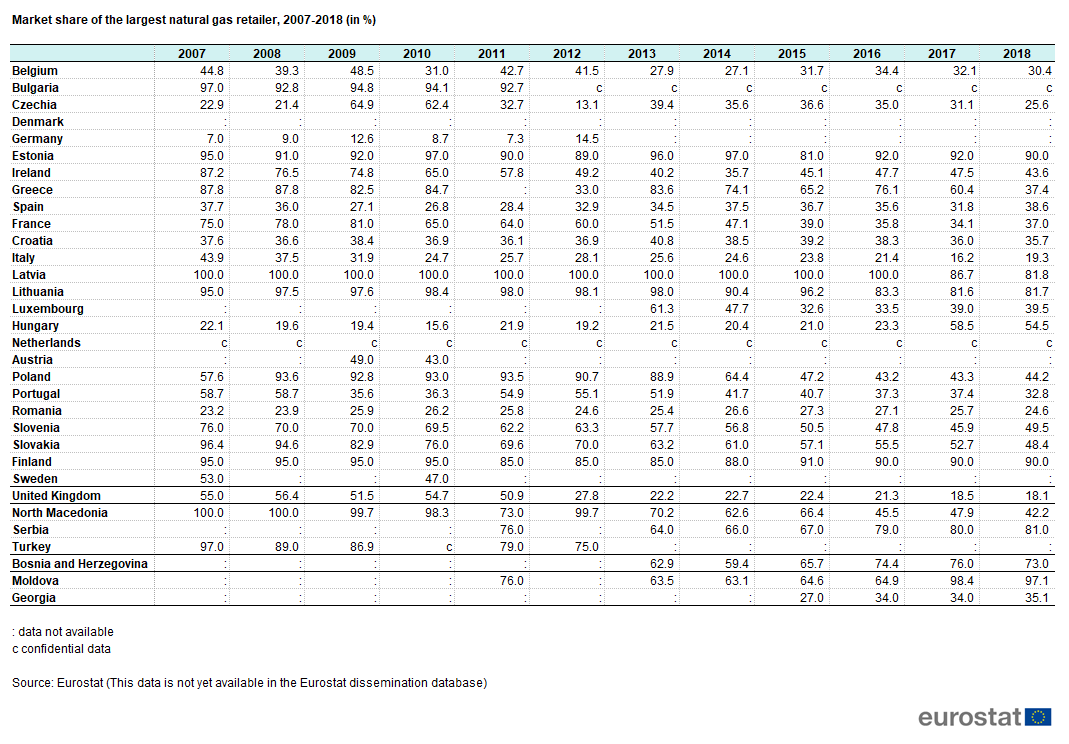 The information used to create this article was collected on the basis of a questionnaire "Competition Indicators for the natural gas market 2017".

All EU Member States except Malta, Cyprus and Sweden, plus North Macedonia, Serbia, Turkey, Bosnia and Herzegovina, Moldova and Ukraine returned the questionnaires to Eurostat but sometimes information for individual indicators were not reported either for confidentiality reasons or because the data was not available.

The data that is used in this article was provided on a voluntary basis.

Since July 2004, small business consumers in the EU have been free to switch their gas or electricity supplier, and in July 2007 this option was extended to all consumers. Independent national regulatory authorities have been established across the Member States to ensure that suppliers and network companies operate correctly. However, a number of shortcomings were identified in the opening-up of markets, and it was therefore decided to embark upon a third legislative package of measures with the aim of ensuring that all users could take advantage of the benefits provided by a truly competitive energy market. The European Commission launched its third legislative package to liberalise energy markets in September 2007. These proposals were designed to: create a competitive energy market, expand consumer choice, promote fairer prices, result in cleaner energy, and promote the security of supply. During 2009, a number of these proposals were adopted by the European Parliament and the Council, in particular the Regulation 713/2009 of 13 July 2009 establishing an agency for the cooperation of energy regulators.