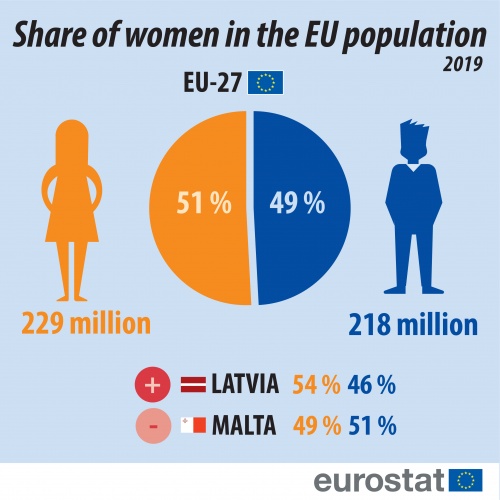 This article presents gender statistics for the European Union (EU), a selection of indicators from fields such as education, labour market, earnings and health, which are particularly important for measuring differences in the situation of women and men (i.e. gender gaps). Gender statistics constitute an area that cuts across traditional fields of statistics to identify, produce and disseminate data reflecting the realities of the lives of women and men, and policy issues relating to gender equality (Developing Gender Statistics: A Practical Tool, UNECE, 2010).

The indicators show gender gaps, together with levels achieved for the population as a whole, at EU level and across Member States (e.g. the gender employment gap with the employment rate). This approach shows gender gaps in access to resources and opportunities in the broader context of the actual resources and opportunities available. The article includes links to other articles and publications that provide a more detailed analysis of gender gaps.

One of the prominent indicators in education statistics is the proportion of persons who have attained tertiary education (i.e. who graduated from universities or other higher education institutions). This indicator belongs to the set of headline indicators used to monitor the Europe 2020 strategy for smart, sustainable and inclusive growth. In particular, one EU-level headline target is to increase the share of the population aged 30–34 having completed tertiary education to at least 40% by 2020. [1]. 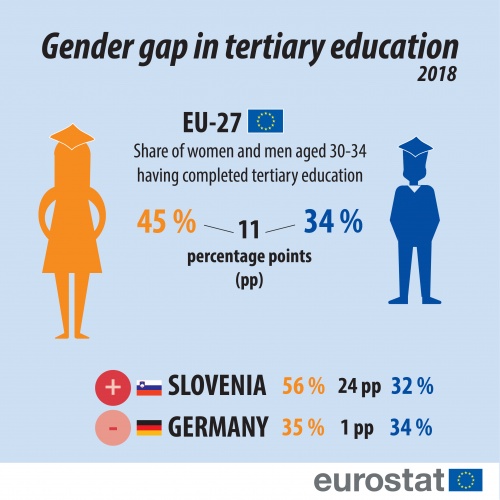 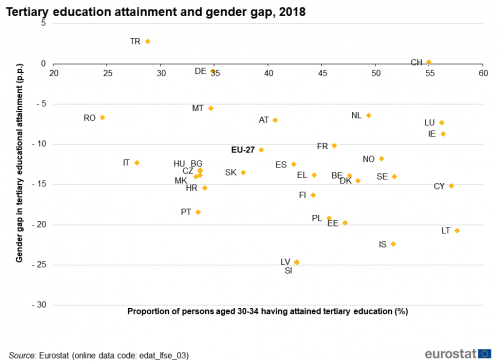 The employment rate is considered to be a key social indicator for analytical purposes when studying developments in labour markets. It is one of the headline indicators used to monitor the Europe 2020 strategy. One EU-level headline target is to raise the employment rate for women and men (aged 20–64) to 75% by 2020. 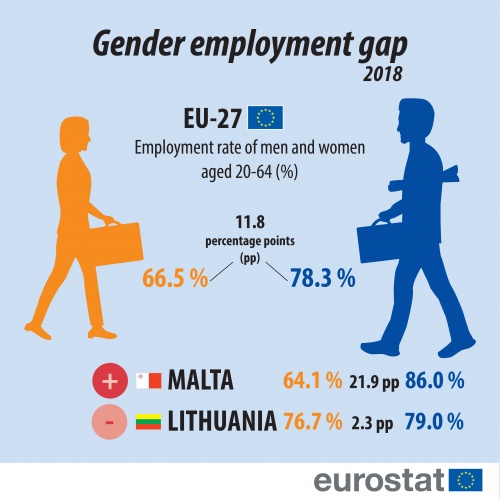 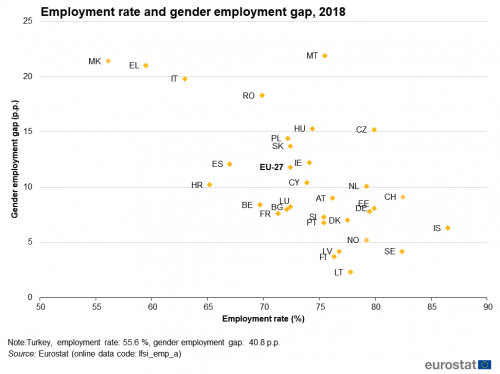 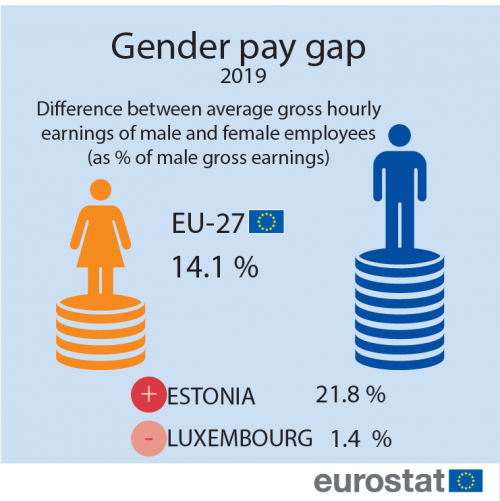 Across the EU, women earn less per hour than men do overall. For the economy as a whole, in 2018, women's gross hourly earnings were on average 14.1 % below those of men in the European Union (EU-27) and 15.0% in the euro area (EA-19). Across Member States, the gender pay gap varied by 20.4 percentage points, ranging from 1.4 % in Luxembourg to 21.8 % in Estonia. For the rest of this section on earnings, which uses data from the last 4-yearly collection of the Structure of Earnings Survey of 2014, the comparison with other different variables is made with 2014 data. 2018 data on the gender pay gap are available in the following article Gender pay gap statistics. 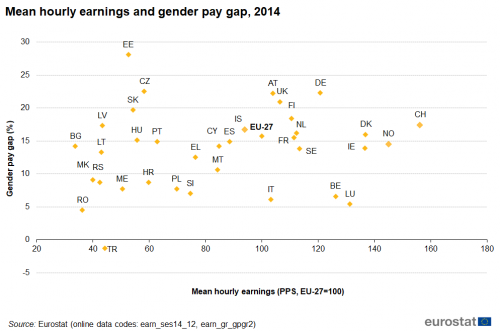 In October 2014, across the EU, women were paid on average 12 % fewer hours than men per month (see Figure 4). The number of hours paid to men is broadly similar across EU countries, whereas part-time arrangements for women differ substantially. For the Netherlands, the gender hours gap stands out, at 28 %, meaning that female employees are paid on average 28 % fewer hours per month than men. At the other end of the scale, Bulgaria, Latvia and Romania recorded a gender hours gap that was 1 %. 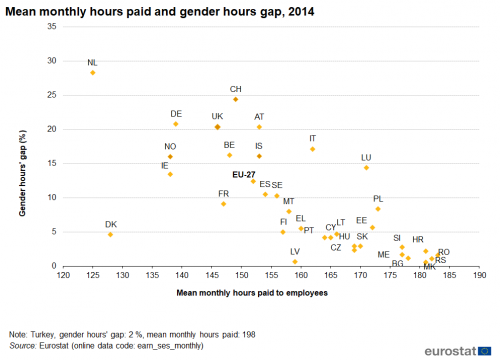 Besides the gender pay gap and the gender hours gap, it is also useful to consider gender gaps in employment, as these also contribute to the difference in average earnings of women versus men[2]. To give a complete picture of the gender earnings gap, a new synthetic indicator has been developed. This measures the impact of the three combined factors, namely: (1) the average hourly earnings, (2) the monthly average of the number of hours paid (before any adjustment for part-time work) and (3) the employment rate, on the average earnings of all women of working age — whether employed or not employed — compared to men. 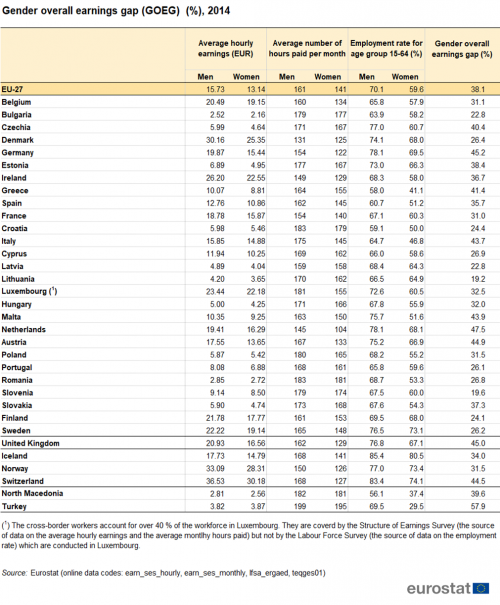 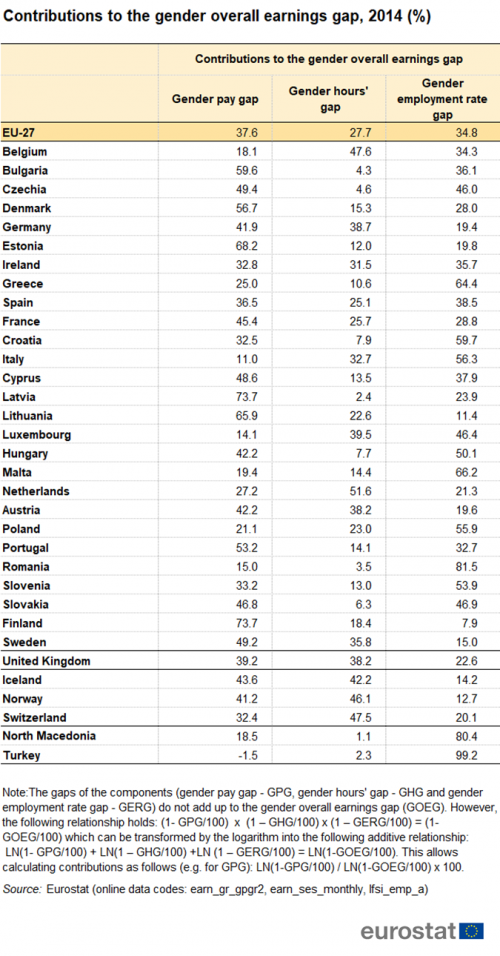 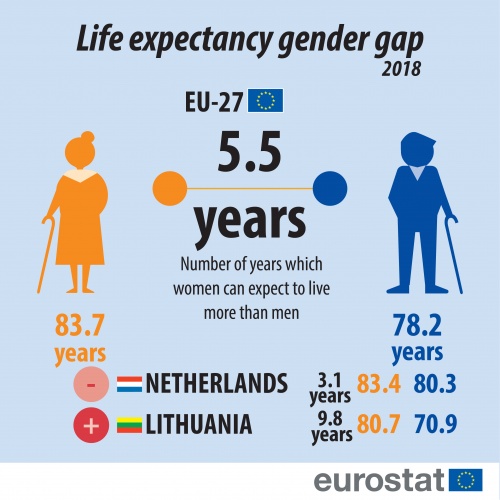 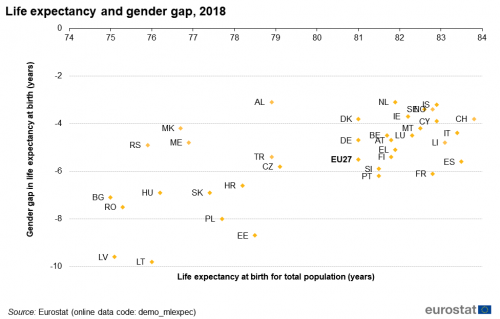 As regards the population as a whole, life expectancy at birth varied between 75.0 and 83.5 years across Member States. Among the countries with the largest gender gap in absolute terms (8 p.p. or higher), life expectancy for the total population was 75.1 in Latvia, 76.0 years in Lithuania, 77.7 in Poland and 78.5 in Estonia, much lower than the EU-27 average of 81.0 years in 2018. Among the countries with the lowest gender gap in absolute terms (i.e. 4 years or below), life expectancy at birth for the total population was generally higher than the EU-27 average — namely 81.0 years in Denmark, 81.9 in the Netherlands, 82.3 in Ireland, 82.9 in Cyprus and 82.6 in Sweden.

For a better view of gender issues concerning health, it is also useful to look at life expectancy by highest level of education attained, causes of death and hospital discharges by diagnosis, as well as healthy life years expectancy and lifestyle characteristics, e.g. smoking (see articles in Statistics Explained in the category Health).

Equality between women and men is a founding value of the EU (Article 2 of the Treaty on European Union) as well as a fundamental right (Article 23 of the Charter of Fundamental Rights of the European Union). Following the 1995 conference in Beijing, the European Council requested an annual review of how EU Member States were implementing the Beijing Platform for Action. To track progress, each EU Council Presidency produces a report that covers developments in a specific critical area. Successive EU Council Presidencies have developed a set of indicators — called the Beijing indicators — covering most of the critical areas of the Beijing Platform for Action.

In March 2010, on the occasion of the 15th anniversary of the Beijing conference, the European Commission adopted the Women’s Charter. In this charter, the European Commission reiterated its ‘commitment to making equality between women and men a reality’ by strengthening the gender perspective in all its policies and by bringing forward specific measures to promote gender equality.

In December 2015, the European Commission adopted the Strategic engagement for gender equality 2016-2019. In this work programme, the Commission has reaffirmed its commitment to continue its work to promote equality between men and women. This means maintaining the focus of gender-equality policy on the five existing thematic priority areas: