Highlights
Tweet
More than three quarters of total inland freight transport in the EU was by road.
Tweet
27 % of EU air freight was carried through German airports in 2017.
Tweet
Dutch maritime ports handled 15 % of EU seaborne goods in 2017.

This article presents information on freight transport in the European Union (EU), covering the transport modes road, rail, air, maritime and inland waterways. The ability to move goods safely, quickly and cost-efficiently to markets is important for international trade, national distributive trades and economic development. The rapid increase in global trade and the deepening integration of an enlarged EU, alongside a range of economic practices (including the concentration of production in fewer sites to reap economies of scale, delocalisation, and just-in-time deliveries), may (at least to some degree) explain the relatively fast growth of freight transport across the EU.

By contrast, strains on the transport infrastructure (congestion and delays), coupled with constraints regarding technical standards, interoperability and governance issues may slow down developments within the EU’s freight transport sector. 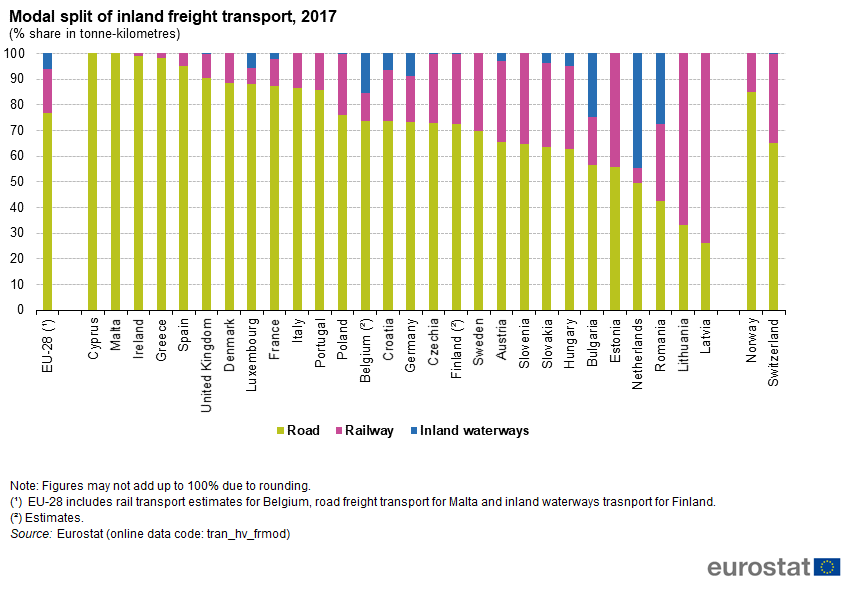 It should be noted that this analysis refers only to inland freight transport; considerable amounts of freight may be transported by maritime freight services and, for some product groups, by air transport or by pipelines.

Relative growth of freight transport and the economy 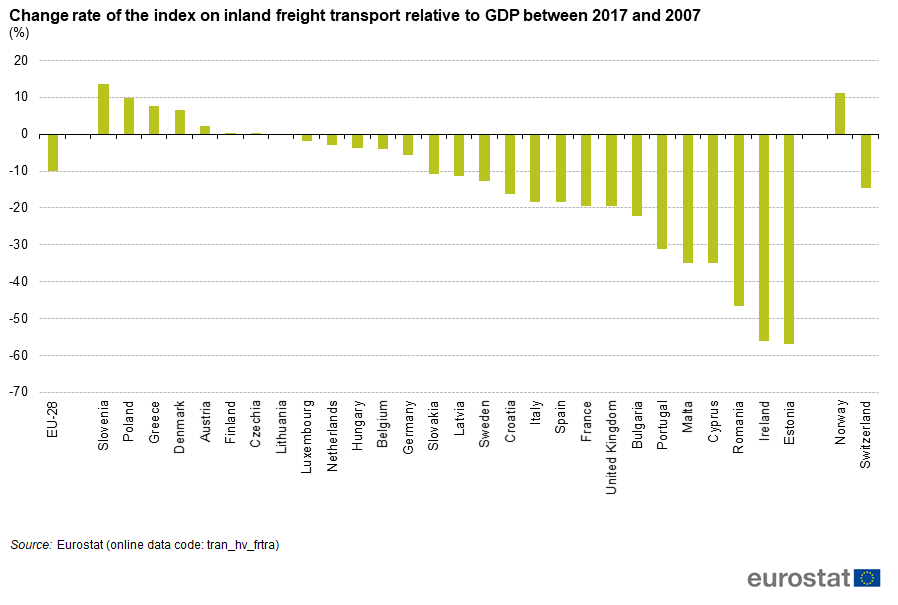 Figure 2: Figure 2: Change rate of the index on inland freight transport relative to GDP between 2017 and 2007
(%)
Source: Eurostat (tran_hv_frtra)

It should be noted that these road freight statistics are based on worldwide movements of vehicles registered in the reporting country (‘nationality principle’). Among the EU Member States, road freight transport relative to population size was the highest in Luxembourg, where, on average, 15 786 tonne-kilometres of freight were transported by road for each inhabitant in 2017. This was 57 % higher than the next highest level of road freight transport per inhabitant, recorded in Lithuania (10 073 tonne-kilometres) (Table 1). 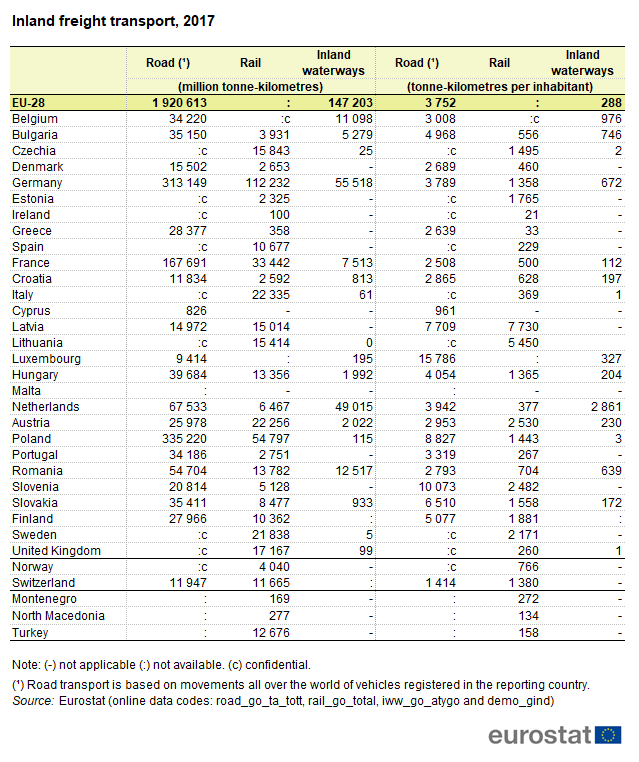 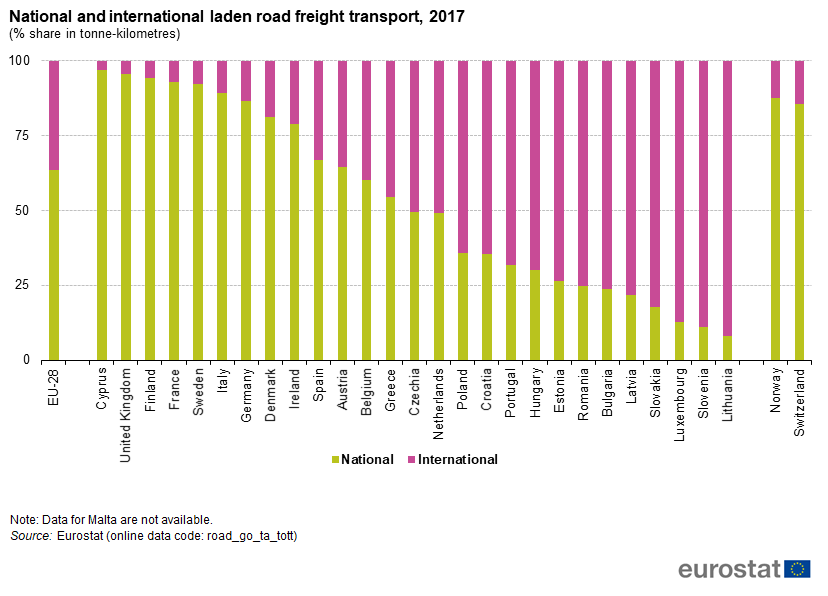 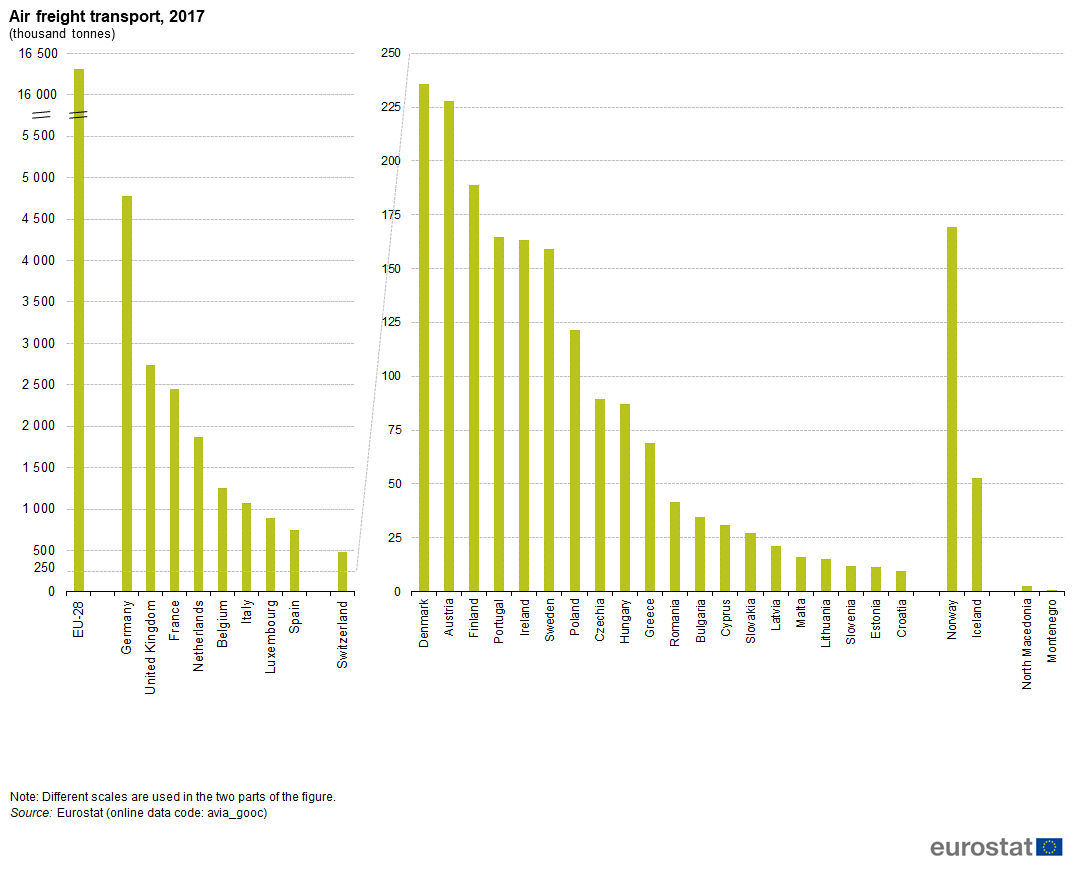 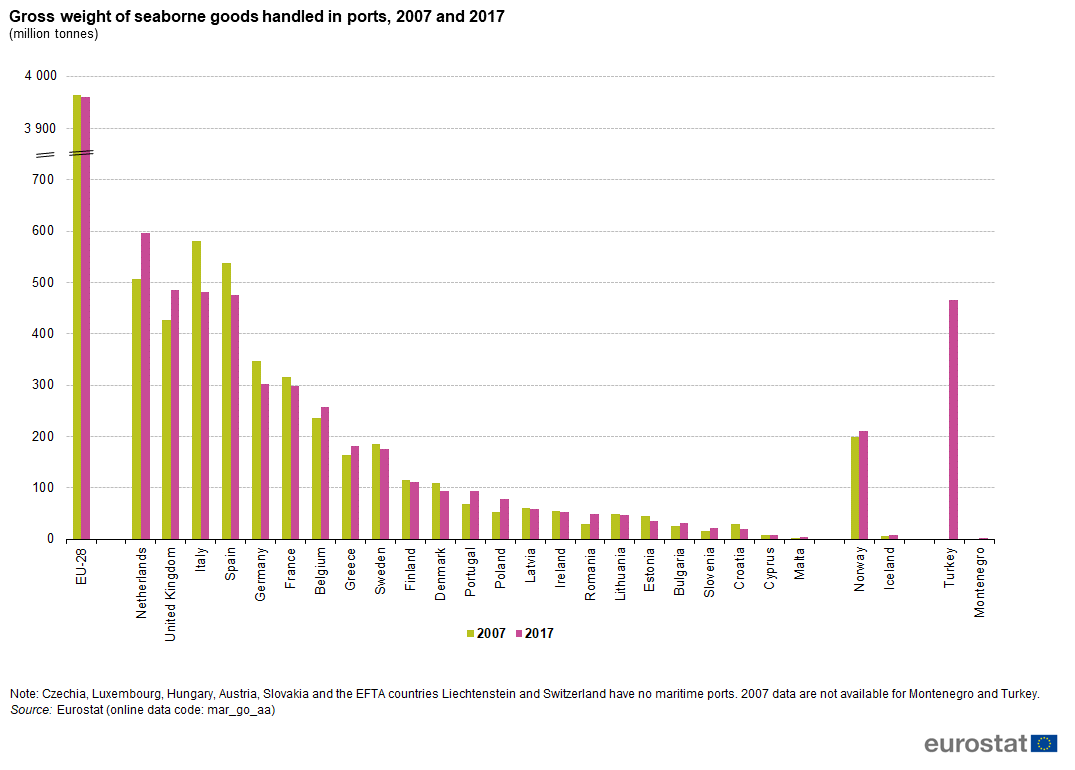 The majority of inland freight transport statistics are based on movements in each reporting country, regardless of the nationality of the vehicle or vessel involved (the ‘territoriality principle’). For this reason, the measure of tonne-kilometres (tkm), i.e. one tonne of goods travelling a distance of one kilometre, is generally considered a more reliable measure, as the use of tonnes entails a higher risk of double-counting, particularly for international transport. The methodology used across the EU Member States is not completely harmonised: for example, road freight statistics are generally based on all movements (in the registration country or abroad) of vehicles registered in the reporting country (the ‘nationality principle’).

The modal split of inland freight transport is based on transportation by road, rail and inland waterways, and therefore excludes air, maritime and pipeline transport. It measures the share of each transport mode in total inland freight transport and is expressed in tonne-kilometres. Note that the data on the modal split presented in this article uses road freight data that have been adjusted to be based on the territoriality principle rather than the nationality principle.

The level of inland freight transport (measured in tonne-kilometres) may also be expressed in relation to GDP; within this article the indicator is presented based on GDP in constant prices for the reference year 2010. This indicator provides information on the relationship between the demand for freight transport and the size of the economy and allows the development of freight transport demand to be monitored relative to economic developments.

Goods loaded are those goods placed on a road vehicle, a railway vehicle or a merchant ship for dispatch by road, rail or sea. The weight of goods transported by rail and inland waterways is the gross-gross weight. This includes the total weight of the goods, packaging, and the tare weight of the container, swap-body and pallets containing goods; in the case of rail freight transport, it also includes road goods vehicles that are carried by rail. By contrast, the weight measured for maritime and road freight transport is the gross weight (in other words, excluding the tare weight of the container).

Road freight transport statistics are collected under the framework provided by Regulation (EC) No 1172/98 on statistical returns in respect of the carriage of goods by road, substantially amended several times, and recast as Regulation (EU) No 70/2012. The data are based on sample surveys carried out in the reporting countries and record the transport of goods by road, as undertaken by vehicles registered in each of the EU Member States. It is important to note that almost all of the Member States apply a cut-off point for carrying capacity under which vehicles are not surveyed; this should not be greater than 3.5 tonnes carrying capacity, or 6 tonnes in terms of gross vehicle weight; some of the Member States also apply a limit on the age of the vehicles surveyed.

Rail freight data are collected under the framework provided by Regulation (EU) No 2018/643 recast of Regulation (EU) No 2016/2032 on rail transport statistics. The data are collected for a quarterly frequency (usually limited to larger enterprises) and for an annual frequency (covering enterprises of all sizes). Statistics for rail freight are not available for Malta and Cyprus (or Iceland) as they do not have a railway infrastructure. Rail statistics are also collected every five years in relation to a regional analysis (NUTS level 2).

Aside from the mandatory collection of data based on legal acts, Eurostat also collects rail transport statistics through a voluntary data collection exercise. The questionnaire used for this exercise provides information in relation to railway transport infrastructure, equipment, enterprises, traffic and train movements.

The legal framework for the collection of statistics on maritime freight transport is Directive 2009/42/EC on statistical returns in respect of the carriage of goods and passengers by sea (Recast). Maritime transport data are available for most EU Member States from 2001 onwards, although some countries have provided data back to 1997. Statistics on maritime freight are not transmitted to Eurostat by Czechia, Luxembourg, Hungary, Austria and Slovakia as they have no maritime ports; for the same reason maritime data are not available for Liechtenstein or Switzerland.

The legal framework for the collection of statistics on inland waterways freight transport is Regulation (EU) 2018/974 of the European Parliament and of the Council of 4 July 2018. This Regulation is a codification of Regulation (EC) No 1365/2006 on statistics of goods transport by inland waterways and includes all its amendments since 2006. Data on inland waterways are only required for those EU Member States with an annual quantity of goods transported that exceeds one million tonnes. On a voluntary basis, countries can provide only a reduced dataset. Currently, eighteen Member States provide data on mandatory or voluntary basis: Belgium (BE), Bulgaria (BG), Czechia (CZ), Germany (DE), France (FR), Croatia (HR), Italy (IT), Lithuania (LT), Luxembourg (LU), Hungary (HU), the Netherlands (NL), Austria (AT), Poland (PL), Romania (RO), Slovakia (SK), Finland (FI), Sweden (SE) and the United Kingdom (UK). Data collection is based on an exhaustive survey of all inland waterway enterprises for all goods that are loaded or unloaded. In the case of transit, some countries make use of sampling methods in order to estimate the volume of goods transported.

The legal framework for air transport statistics is provided by Regulation (EC) No 1358/2003 of 31 July 2003 implementing Regulation (EC) No 437/2003 of 27 February 2003 on statistical returns in respect of the carriage of passengers, freight and mail by air. Statistics on air freight are collected for freight and mail loaded and unloaded in relation to commercial air flights. The information covers national and international freight transport.

Air transport statistics are collected at the airport level by the EU Member States, Norway, Iceland, Switzerland and the candidate countries. Annual data are available for most of the Member States for the period from 2003 onwards, while some countries have provided data back to 1993. Air freight statistics are also collected for a monthly and a quarterly frequency and with a regional analysis (NUTS level 2).

A well-functioning transport system is vital for European Union (EU) enterprises and inhabitants. Transport services are essential for exploiting the economic strengths of all EU regions, supporting the internal market and growth, and for enabling economic and social cohesion. The EU transport policy is laid down in the 2011 White Paper ‘Roadmap to a Single European Transport Area — Towards a competitive and resource eﬃcient transport system’. The strategy aims at fostering the development of an efficient, safe and secure single European transport area; shifting towards clean and low-emission mobility; connecting Europe with modern, multi-modal and safe transport infrastructure networks; creating an innovative transport sector through research and innovation activities; and at ensuring affordability, reliability and accessibility of transport. The White Paper was built around 10 goals and 40 initiatives. Currently, the progress towards the goals is under evaluation so that the EU can pave its future transport policy.

In order to monitor progress towards targets, answer specific questions on transport performance and propose future developments, the European Commission analyses a range of transport statistics. Eurostat’s statistics in this field describe the most important features of transport, not only in terms of the quantities of freight that are moved each year, but also the contribution of transport services to the economy as a whole. Data collection is supported by several legal acts obliging the EU Member States to report statistical data, as well as voluntary agreements to supply additional data.

More details concerning the European Commission’s policy initiatives on transport are provided in an introductory article on transport in the EU.