The indicator on duration of working life has been developed to monitor the EU 2020 strategy on employment. It is an indication, i.e. estimation, of the number of years a person, at the current age of 15 years, is expected to be in the labour market (i.e. to be employed or unemployed) throughout his or her life.

In this article, the expected average duration of working life of the adult population aged 15 years and more is described for the 27 EU Member States, the United Kingdom, four candidate countries and three EFTA countries. It provides a different angle of the labour market, looking at the entire life cycle of persons in the labour force (i.e. being employed or unemployed) rather than on specific states in the life cycle, such as youth unemployment or early withdrawal from the labour force.

Increase in expected duration of working life in the EU

Sweden and the Netherlands with the longest working life

In the European Union, there is a clear east/west division regarding the average expected duration of working life, with only Italy (32.0 years in 2019), Belgium (33.6) and Luxembourg (33.9) as exceptions on the western side (Map 1). These three countries have on average shorter working lives compared with the other western countries, where the expected number of working years is in the range 35 to 40 years.

The Baltic countries are closer to the western part of Europe in terms of duration of working life; indeed Estonia, Lithuania and Latvia recorded 39.0, 37.1 and 36.8 years respectively in 2019. It is also worth noticing that the expected number of working years in Cyprus (37.5 years) exceeded the one in its neighbouring countries. 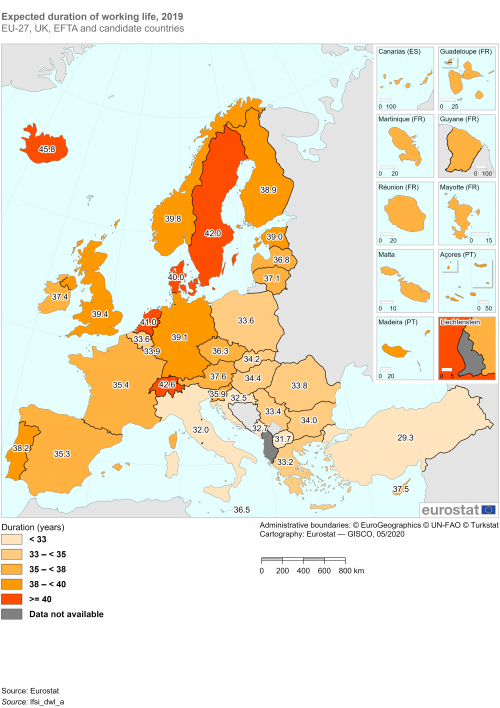 Map 1: Estimated duration of working life in years for a person who is 15 years old in 2019, by country
Source: Eurostat (lfsi_dwl_a)

Overall, countries can be divided into five groups. The first group is made of the low ranking countries, where the expected duration of working life is below 33 years, including Italy, Croatia, Montenegro, North-Macedonia and Turkey. Next is the group of countries where the expected duration of working life is within the range of 33 to 35 years. This group includes Greece, Belgium, Poland, Romania, Luxembourg, Bulgaria, Slovakia, Hungary and Serbia. Spain, France, Slovenia, Czechia, Malta, Latvia, Lithuania, Ireland, Cyprus and Austria shape the third group, which corresponds to a working life of 35 to 38 years. Group number four consists of countries with an estimated working life of 38 to 40 years, i.e. Portugal, Finland, Estonia, Germany, the United Kingdom and Norway. Denmark, the Netherlands, Sweden, Switzerland and Iceland shape the last group with an expected working life of 40 years and over.

In 2019, the duration of working life was longer for men than for women in all countries, with the exception of Latvia and Lithuania (Figure 1). In Latvia there was no difference in the expected years between sexes, while in Lithuania, women were expected to work longer than men (0.8 years). Among the EU Member States, Malta had the largest gender gap at 9.3 years, followed by Italy at 9.1 years. This gap was, however, bigger in the two candidate countries North Macedonia (10.4 years) and Turkey (19.9 years).

Figure 1: Expected duration of working life in years for a person who is 15 years old in 2019, by country and sex.
Source: Eurostat (lfsi_dwl_a) 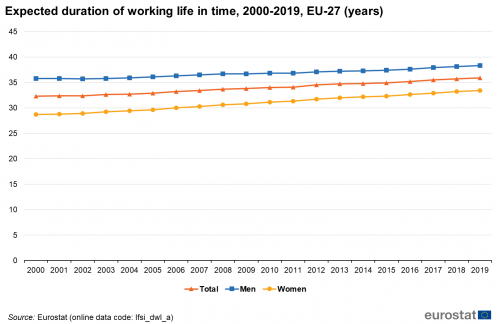 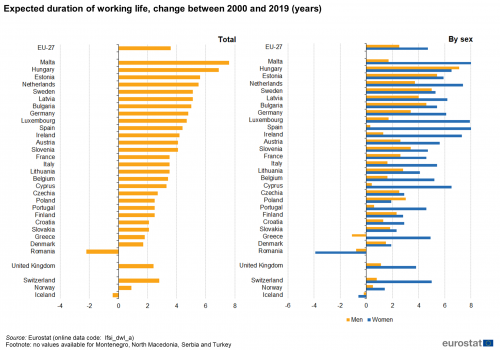 The duration of working life is calculated using the participation rates (also called "activity rates") from the Labour Force Survey and life tables from demography statistics. Both the activity rates (in 5 year bands) as well as the complete (single year) life tables are published by Eurostat.

The duration of working life indicator is produced at the request of the Employment Committee indicators group, under the EU 2020 strategy. It uses life expectancy tables and activity rates as input for the calculation. The methodology was developed at the Ministry of Labour of Finland, in a paper by Helka Hytti and Ilkka Nio.

A common misunderstanding in the public debate on this indicator is that it shows how long persons must or should work. This is not the case. The indicator is purely descriptive and shows what is happening, not what should be happening.

As it is an average computed over all adults in the country, the indicator is heavily influenced by the number of persons outside the labour force in a country. In other words, it does not make any claims about how many years the persons who are in employment, work. It rather shows the combined effect of: 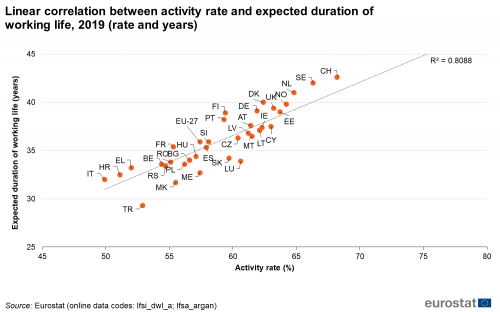