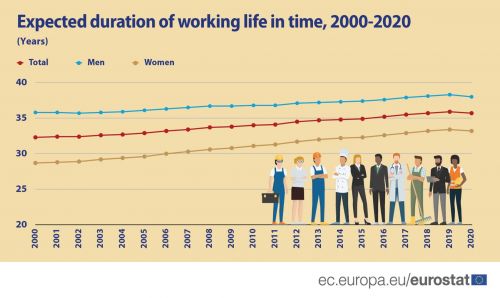 The indicator on duration of working life is an estimation of the number of years a person, at the current age of 15 years, is expected to be in the labour force (i.e. to be employed or unemployed) throughout his or her life. It aims to provide a different angle of the labour market, looking at the entire life cycle of persons in the labour force rather than on specific states in the life cycle, such as youth unemployment or early withdrawal from the labour force.

In this article, the expected average duration of working life is described for the European Union (EU) as a whole, for the 27 EU Member States individually, for three EFTA countries (Iceland, Norway and Switzerland) and four candidate countries (Montenegro, North Macedonia, Serbia and Turkey).

Sweden, the Netherlands and Denmark with the longest working life 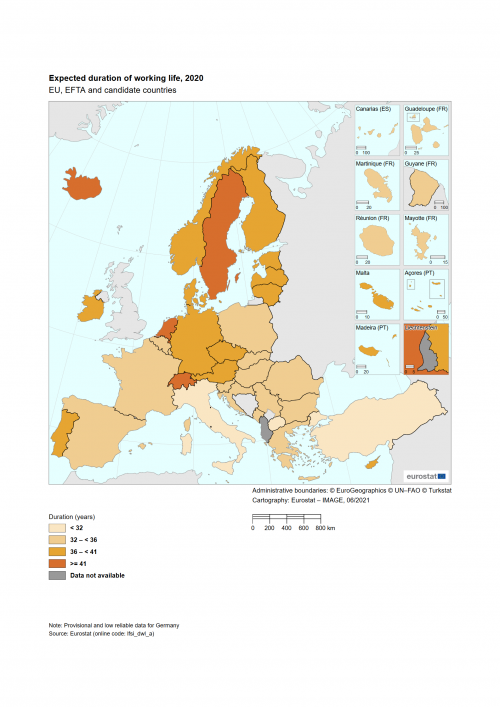 Map 1: Estimated duration of working life in years for a person who is 15 years old in 2020, by country
Source: Eurostat (lfsi_dwl_a)

In 2020, the duration of working life was longer for men than for women in all countries, with the exception of Lithuania (Figure 1) where women were expected to work longer than men (0.4 years). Among the EU Member States, Italy had the largest gender gap at 9.3 years, followed by Malta at 8.9 years. This gap was, however, larger in the two candidate countries North Macedonia (10.6 years) and Turkey (19.9 years).

Figure 1: Expected duration of working life in years for a person who is 15 years old in 2020, by country and sex.
Source: Eurostat (lfsi_dwl_a)

Downward trend for the gender gap 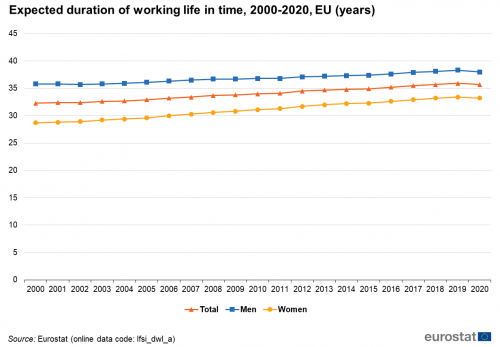 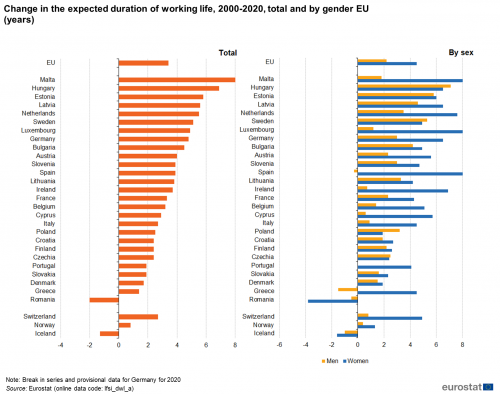 Figure 3: Expected duration of working life in years for a person who is 15 years old, development over time from 2000 to 2020, EU
Source: Eurostat (lfsi_dwl_a)

The duration of working life is calculated using the participation rates (also called "activity rates") from the Labour Force Survey and life tables from demography statistics. Both the activity rates (in 5 year bands) as well as the complete (single year) life tables are published by Eurostat.

The EU-LFS is the largest European household sample survey providing quarterly and annual results on labour participation of people aged 15 and over as well as on persons outside the labour force. It covers residents in private households. Conscripts in military or community service are not included in the results. The EU-LFS is based on the same target populations and uses the same definitions in all countries, which means that the results are comparable between the countries.

Coverage: The results from the survey currently cover European Union Member States, the EFTA Member States of Iceland, Norway, Switzerland, as well as the candidate countries Montenegro, North Macedonia, Serbia and Turkey. For Cyprus, the survey covers only the areas of Cyprus controlled by the Government of the Republic of Cyprus.

Country note: In Germany, since the first quarter of 2020, the Labour Force Survey (LFS) has been integrated into the newly designed German microcensus as a subsample. Unfortunately, for the LFS, technical issues and the COVID-19 crisis has had a large impact on the data collection processes, resulting in low response rates and a biased sample. Changes in the survey methodology also led to a break in the data series. The published German data are provisional and may be revised in the future. For more information, see here.

European aggregates: EU refers to the sum of the 27 EU Member States. Cases, where data are unavailable for a country, are indicated.

Definitions: The concepts and definitions used in the survey follow the guidelines of the International Labour Organization (ILO). In particular, employed people comprise: (a) persons who during the reference week worked for at least one hour for pay or profit or family gain; (b) persons who were not at work during the reference week but had a job or business from which they were temporarily absent.

The duration of working life indicator was developed at the request of the Employment Committee indicators group under the EU 2020 strategy. It uses life expectancy tables and participation rates (also called "activity rates") as input for the calculation. The methodology was developed at the Ministry of Labour of Finland, in a paper by Helka Hytti and Ilkka Nio.

A common misunderstanding in the public debate on this indicator is that it shows how long persons must or should work. This is not the case. The indicator is purely descriptive and shows what is happening, not what should be happening.

As it is an average computed over all adults in the country, the indicator is heavily influenced by the number of persons outside the labour force in a country. In other words, it does not make any claims about how many years the persons who are in employment, work. It rather shows the combined effect of: 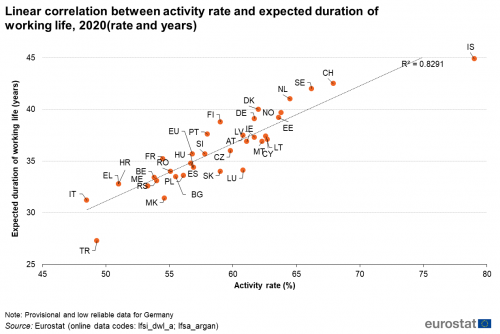