In 2016, among the EU Member States, the highest standardised death rates for cancer were recorded in Hungary and Croatia, each with rates of at least 330 per 100 000 inhabitants.

This article presents an overview of statistics related to cancer in the European Union (EU) and focuses on three aspects: deaths from cancer, cancer healthcare and the availability of specialist healthcare personnel and equipment for the treatment of cancer. Some of the statistics presented in this article are only available for the broader category of neoplasms, which includes benign and uncertain neoplasms as well as malignant ones (cancer). An accompanying article, Cancer statistics — specific cancers, looks in more detail at statistics for a selection of specific cancers: colorectal cancer, lung cancer, breast cancer and prostate cancer. 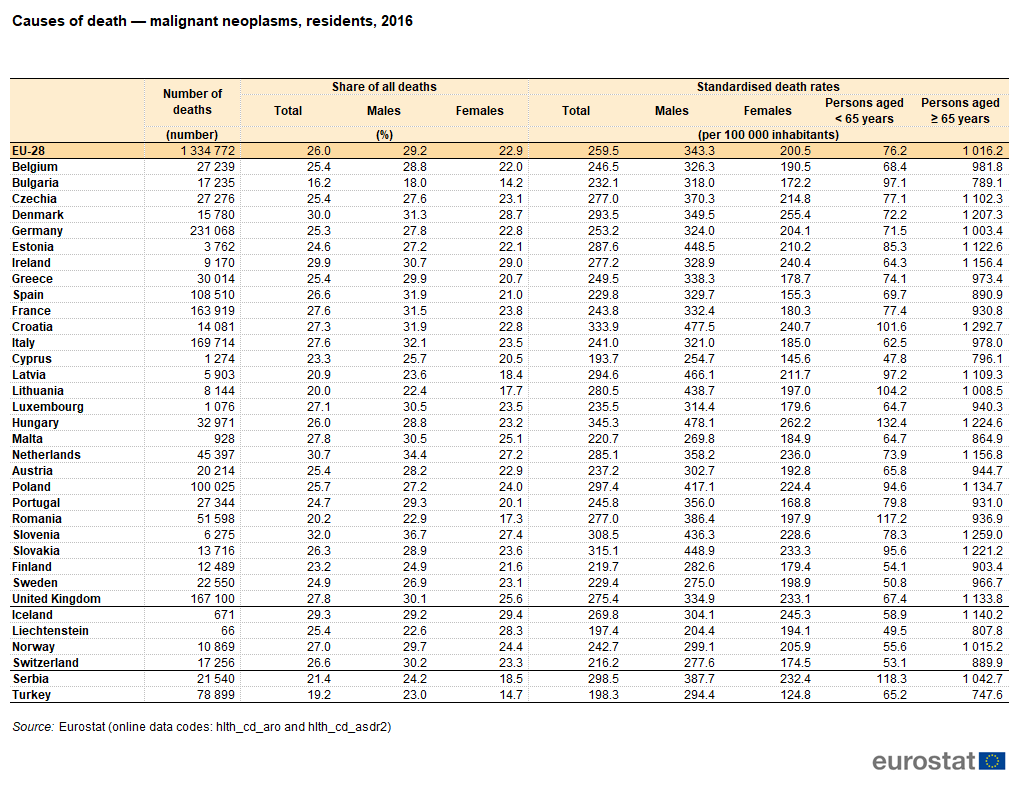 Among the EU Member States, the share of deaths from cancer in the total number of deaths in 2016 reached or exceeded 30.0 % in Denmark, the Netherlands and Slovenia: among men this share peaked at 36.7 % in Slovenia and 34.4 % in the Netherlands, while among women it peaked at 29.0 % in Ireland and 28.7 % in Denmark. By contrast, less than one fifth of all deaths in Bulgaria were caused by cancer.

For the EU-28, the standardised death rate for cancer was 259.5 per 100 000 inhabitants in 2016, lower than the rate for circulatory diseases, but higher than the rate for most other causes of death (at a similar level of the International Statistical Classification of Diseases and Related Health Problems (ICD)). An analysis by gender and by age shows large differences in standardised death rates for cancer: for men the rate (343.3 per 100 000 male inhabitants) was 71 % higher than that for women (200.5 per 100 000 female inhabitants), while the rate for persons aged 65 years and over was 13 times as high as it was for younger persons (those aged less than 65 years).

Three sets of data are available for cancer healthcare. These concern the number of discharges of in-patients, the average length of stay for in-patients, and the type of operations and procedures performed.

Concerning the provision of care, this article concentrates on in-patient care and day care. Both in-patient care and day care comprise a formal admission into a health care facility such as a hospital for diagnosis, treatment or other types of health care. While in-patient care involves an overnight stay after admission, day care comprises planned medical and paramedical services delivered to patients without an overnight stay: day care patients are formally admitted with the intention of being discharged on the same day. The inclusion of accommodation with medical and ancillary care constitutes the main distinction between in-patient and outpatient care.

In 2017, there were around 7.1 million in-patients who were discharged from hospitals in the EU-28 (2016 data for Denmark, Luxembourg and the United Kingdom; 2015 data for Portugal; no recent data for Greece) having been treated for neoplasms.

Austria recorded the highest discharge rate for in-patients with neoplasms 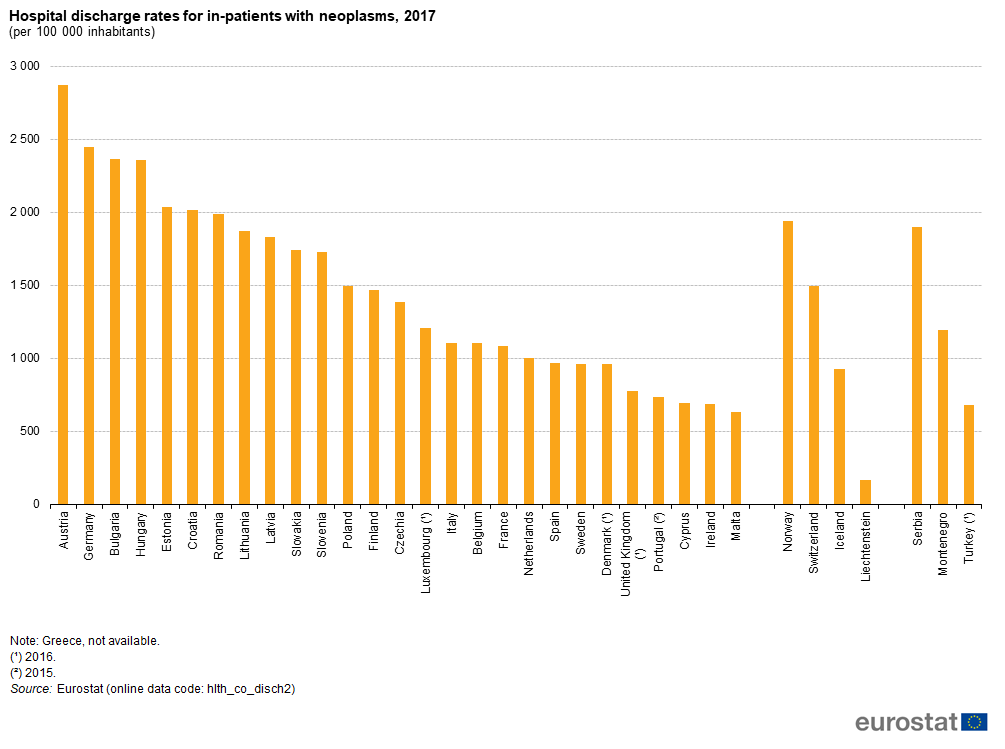 In 2017, the average length of stay for in-patients having been classified for the purpose of their treatment or investigation under neoplasms ranged among the EU Member States from 4.9 days in Bulgaria to 10.1 days in Portugal (2015 data) and 10.2 days in Malta (no recent data for Greece). A comparison of the data for 2017 with that for 2012 (see Figure 2 for the precise availability) shows an overall downward pattern in the average length of stays for in-patients, with increases only being recorded for Malta, Cyprus, Spain and Austria, while there was no change in the average length of stay in Portugal (2012-2015) and the United Kingdom (2012-2016); increases were also recorded for Serbia (2014-2017) and Turkey (2011-2016) among the non-member countries shown in Figure 2. The largest reductions in terms of the average number of days were recorded in Croatia and Slovenia (respectively 1.6 and 1.7 days fewer in 2017 than in 2012). 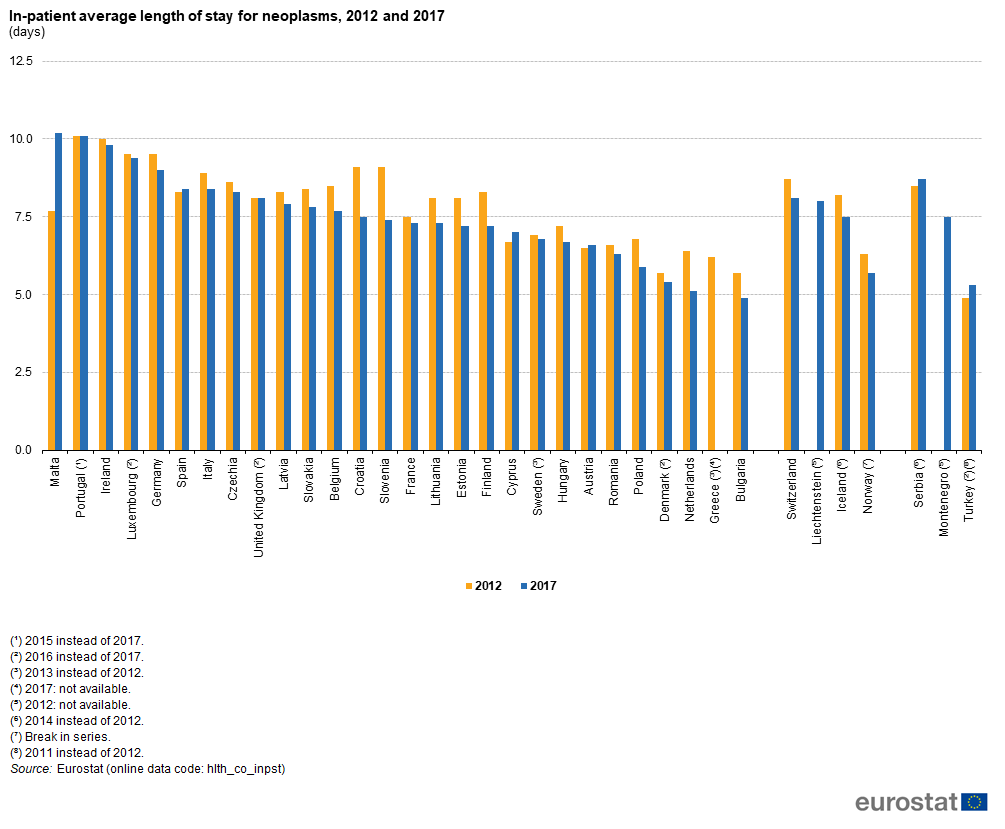 Table 2 presents data for the frequency (relative to population size) with which a range of operations and procedures were carried out: the selected operations and procedures are used mainly for the diagnosis or treatment of cancer. The most common of these was a colonoscopy (ICD-9-CM codes 45.22-45.25, 45.42 and 45.43). A colonoscopy is a procedure to examine the inside of the colon, whereas a colectomy (codes 45.7 and 45.8) is an operation to remove all or part of the colon. In 2017, more than half a million operations were performed in the 24 EU Member States with data available (2016 data for Denmark, 2015 data for Spain and Portugal, 2014 data for the Netherlands, no or incomplete data for Czechia, Greece, Latvia and Slovakia) to remove part or all (total mastectomy) of a mammary gland (codes 85.20-85.23, 85.33–85.36 and 85.4) to prevent or treat breast cancer. The least common of the operations and procedures shown in Table 2 was a pulmectomy, an operation to remove part or all of a lung (codes 32.3–32.5; segmental resection of lung, lobectomy of lung and complete pneumonectomy). 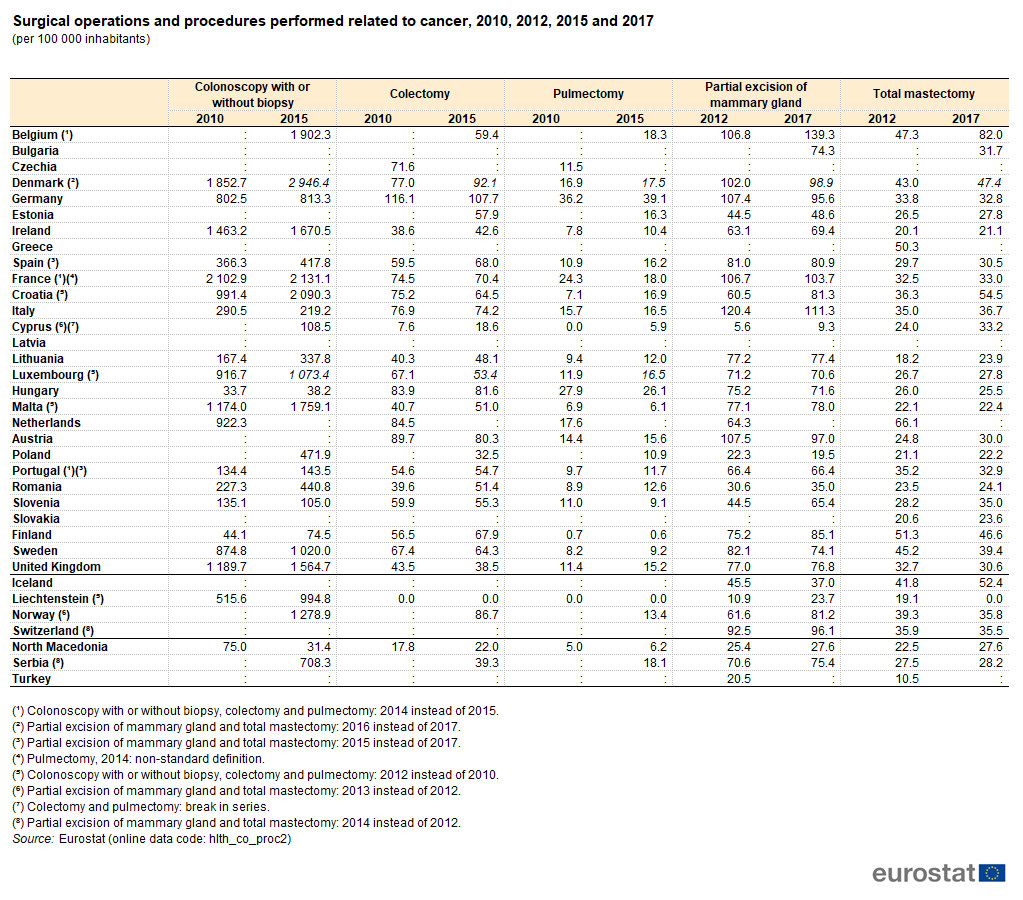 Between 2010 and 2015, most EU Member States (subject to data availability) reported increases in the frequency with which colonoscopies, colectomies and pulmectomies were performed (Table 2). The most rapid increases were normally reported for colonoscopies, with increases between 30 % and 110 % in Croatia (2012-2015), Lithuania, Romania, Finland, Denmark, Malta (2012-2015) and the United Kingdom; only Slovenia and Italy reported falls in the frequency (relative to population size) with which colonoscopies were performed.

For colectomies, the largest increase in frequency of operations and procedures was reported by Cyprus (note that there is a break in series) and increases between 10 % and 30 % were observed in Romania, Malta (2012-2015), Finland, Denmark, Lithuania Spain and Ireland, whereas around half of the EU Member States with data available recorded decreases in the frequency of these operations, most notably in Luxembourg (2012-2015).

For pulmectomies, particularly large increases in the rate at which this procedure was performed were reported by Croatia (2012-2015), Spain, Romania, Luxembourg (2012-2015), Ireland, the United Kingdom and Lithuania in contrast to decreases in France (2010-2014, note that there is a change in definition), Slovenia, Finland and Malta (2012-2015).

Oncologists are doctors specialising in the diagnosis or treatment of cancer, for example through medical practices such as radiation therapy or through surgery. In 2015, there were around 18 200 oncologists in the EU Member States for which data were available (2014 data for Denmark, Finland and Sweden, 2013 data for Czechia; no recent data for Croatia, Hungary, the Netherlands, Austria and Slovakia). 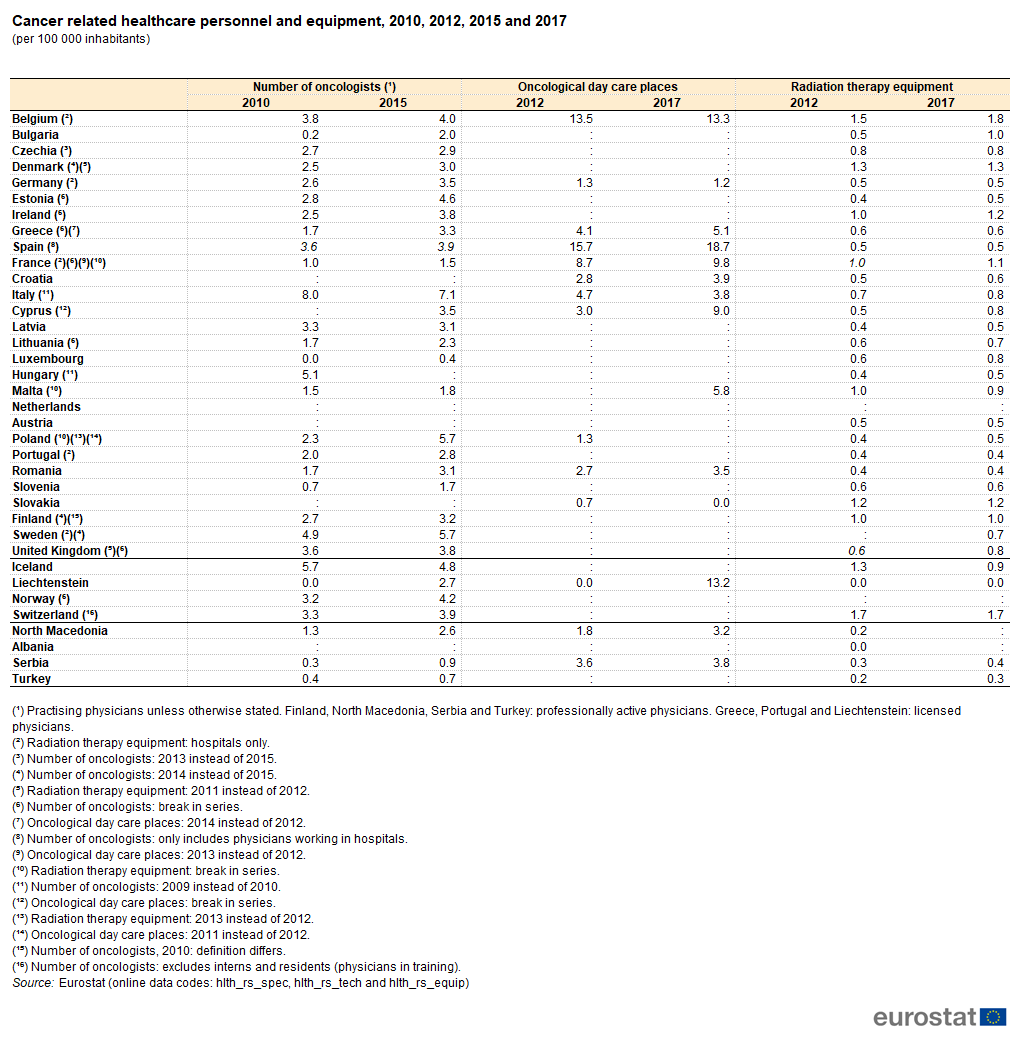 Oncological day care involves treatments that do not require an overnight stay, for example day case chemotherapy, blood and platelet transfusions, tests, removal of sutures (stitches), injections and dressings. Although only a limited amount of data are available (see Table 3 for data availability), the range in availability of day care places in 2017 was large, from no places in Slovakia to 13.3 places per 100 000 inhabitants in Belgium and 18.7 places per 100 000 inhabitants in Spain.

Radiation therapy equipment covers machines used for treatment with x-rays or radionuclides. These include linear accelerators, Cobalt-60 units, Caesium-137 therapy units, low to orthovoltage x-ray units, high dose and low dose rate brachytherapy units, and conventional brachytherapy units: note that some of these machines may also be used for treatments other than for cancer. In 2017, there were more than 3 600 radiation therapy units in the EU Member States for which data are available (no data for the Netherlands; note that data for Belgium, Germany, France, Portugal and Sweden refer only to equipment in hospitals), with the largest numbers in France (721) and the United Kingdom (536). Relative to population size, radiation therapy equipment was most common in Belgium (data for hospitals only), while it was least common in Portugal (data for hospitals only) and Romania.

An in-patient or day care patient is discharged from hospital when formally released after a procedure or course of treatment (episode of care). A discharge may occur because of the finalisation of treatment, signing out against medical advice, transfer to another healthcare institution, or because of death.

The number of deaths from a particular cause of death can be expressed relative to the size of the population. A standardised (rather than crude) death rate can be compiled which is independent of the age and sex structure of a population: this is done as most causes of death vary significantly by age and according to sex and the standardisation facilitates comparisons of rates over time and between countries.

Causes of death are classified according to the European shortlist (86 causes), which is based on the International Statistical Classification of Diseases and Related Health Problems (ICD). Chapter II of the ICD covers neoplasms:

For hospital discharges and the length of stay in hospitals, the International Shortlist for Hospital Morbidity Tabulation (ISHMT) is used to classify data from 2000 onwards; Chapter II covers neoplasms:

Statistics on healthcare resources (such as personnel and medical equipment) and healthcare activities (such as information on surgical operations and procedures and hospital discharges) are documented in the background article Healthcare non-expenditure statistics — methodology which provides information on the scope of the data, its legal basis, the methodology employed, as well as related concepts and definitions.

For surgical operations and procedures the International Classification of Diseases — clinical modification (ICD-9-CM) is used:

Although significant advances have been made in the fight against this group of diseases, cancer remains a key public health concern and a tremendous burden on EU societies — it is the second largest cause of death in the EU-28. The ambitious goal set by the European Commission Communication on Action Against Cancer: European Partnership (adopted in June 2009) is to reduce cancer incidence by 15 % by 2020.

By way of Decision 2014/C 167/05, the European Commission established an expert group on Cancer Control with the aims to: assist the European Commission in the drawing up of legal instruments and policy documents, guidelines and recommendations on cancer control; advise in the implementation, monitoring, evaluation and dissemination of the results of EU and national measures and on international cooperation; facilitate coordination and exchange of information between EU Member States; provide an overview of EU and national policies; gather information about relevant experience, policies and practices of the Member States and other parties.