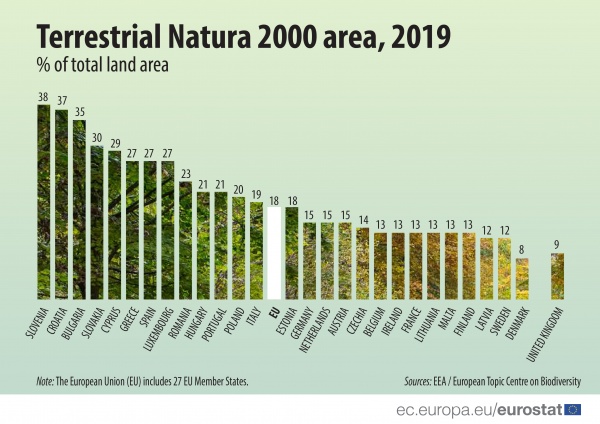 Biodiversity encompasses the number, variety and variability of plants, animals and other organisms, including humans. We depend on the natural richness of our planet for the food, energy, raw materials, clean air and water that make life possible and underpin our economies; therefore, it is essential to prevent a loss of biodiversity — any loss may not only undermine the natural environment, but also our economic and social goals. At the end of 2019, the European Commission adopted The European Green Deal, an ambitious vision for a sustainable, green transition that is just and socially fair. Biodiversity is one of its key policy areas. Most recently, on 20 May 2020 the European Commission adopted the EU Biodiversity Strategy for 2030 to halt the decline in biodiversity and bring nature back into our lives. This article examines two indicators for biodiversity in the European Union — information on protected areas (for terrestrial and marine biodiversity) and bird populations.

Natura 2000 - the cornerstone of biodiversity protection in the EU

The EU has the largest coordinated network of protected areas in the world; it is knows as Natura 2000 and consist of ca 27 000 sites. The Natura 2000 network stems from the legal basis provided by the Habitats Directive and the Birds Directive ("the Nature Directives"). Areas to be protected under these two directives are proposed by the EU Member States. Natura 2000 areas do not necessarily overlap with protected areas designated under national legislation of Member States - its objective is to ensure the preservation of most valuable and threatened species and habitats of the EU. Economic activities are allowed under Natura 2000 as long as they do not affect the conservation status of species or habitats in a negative way.

Figure 1 shows the total extent of the national terrestrial Natura 2000 network for all Member States for 2019 and also the share of their land area protected as Natura 2000. 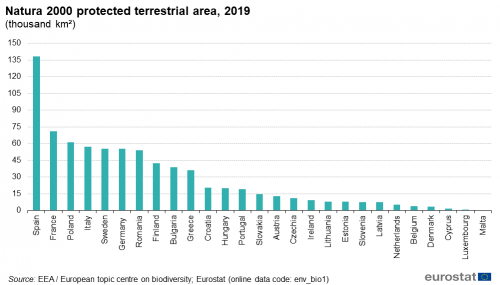 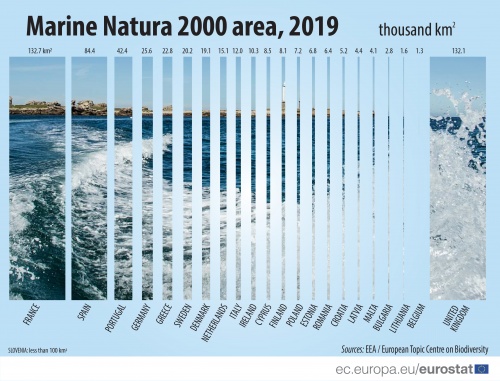 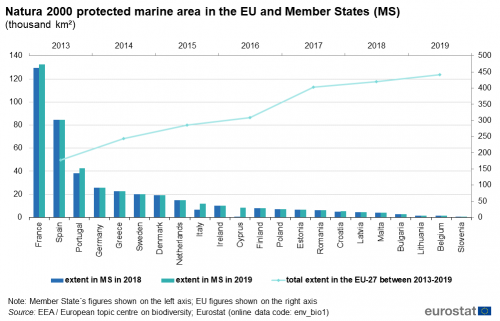 Figure 2: Natura 2000 protected marine area in the EU and Member States (MS)
(thousand km²)
Source: EEA / European topic centre on biodiversity; Eurostat (env_bio1)
The condition of protected areas Eurostat does not collect or republish data about qualitative aspects of protected areas (i.e. their condition or "conservation status") which may provide a better indication of the state and trends in biodiversity than the size or coverage of protected areas. The European Environment Agency concluded in their report The European environment - state and outlook 2020 that 60 % of species and 77 % of habitats listed in the Habitats Directive showed predominantly unfavourable conservation status.

Being relatively easy to monitor, compared with many other groups of organisms, and sensitive to changes in the environment, including pollution and habitat modification, birds have been used as an important indicator of the state of the environment.

Populations of birds in the EU have been declining for several decades. While the decline appears to have slowed down in recent decades, nonetheless, between 2000 and 2018, the EU's population of all common bird species declined by 4.3 % and common farmland birds by 16.9 %. A reversed trend was observed for common forest birds – an increase of 7.1 % (Figure 3).

Bird monitoring in the EU is conducted under the umbrella of the PanEuropean Common Bird Monitoring Scheme. The scheme helps standardise data collection and analyses across countries and produces three indices for the populations of common birds – index for all common birds (including 168 species), index for common farmland birds (39 species) and index for common forest birds (34 species).

Large losses in populations of common farmland bird species are, in general, thought to be attributed to changes in land use and agricultural practices, and in particular the disappearance of small, non-productive landscape elements, such as hedges and windbreaks, and the use of pesticides. 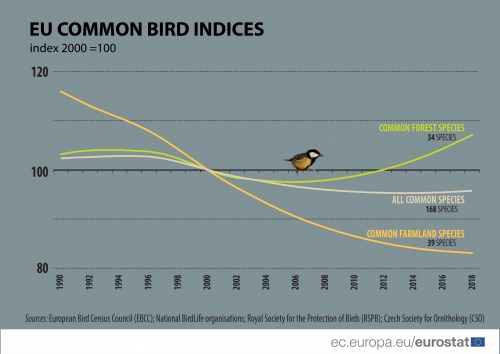 Annual data are available on terrestrial and marine areas protected under the Habitats Directive (92/43/EEC) of 21 May 1992 on the conservation of natural habitats and of wild fauna and flora. The Directive protects over 1 000 animal and plant species and more than 200 types of habitat (for example, special types of forests, meadows or wetlands), which are considered to be of European importance. It has led to the creation of a network of protected special areas of conservation (SACs). Together with the special protection areas (SPAs) defined by the Birds Directive of 2 April 1979, codified by Directive 2009/147/EU of 30 November 2009, these areas make up the Natura 2000 network of protected areas, designed to ensure the long-term survival of Europe's most valuable and threatened species and habitats.

Across the EU, the conservation of wild birds is covered by Council Directive 79/409/EEC of 2 April 1979, as codified by Directive 2009/147/EU of 30 November 2009. Birds are considered to be good proxies for measuring the diversity and integrity of ecosystems as they tend to be near the top of the food chain, have large ranges and the ability to move elsewhere when their environment becomes unsuitable; they are therefore responsive to changes in their habitat. Birds are thus a recognised ecological indicator taxon.

The EU indices are based on data from 25 EU Member States (data for Croatia and Malta are not available), derived from annually operated surveys of national breeding birds collated by the Pan-European Common Bird Monitoring Scheme (PECBMS); these data are considered to be a good proxy for the whole of the EU.

For the first two categories, the bird species have a high dependence on agricultural or on forest habitats in the nesting season and for feeding. Both groups comprise year-round residents and migratory species. The index ‘All common birds’ comprises farmland and forest species together with other common species that are generalists, meaning that they occur in many different habitats or are particularly adapted to life in cities.

In 1998, the EU adopted a biodiversity strategy. Four action plans covering the conservation of natural resources, agriculture, fisheries, and economic and development cooperation were subsequently agreed as part of this strategy in 2001. As a follow-up, in May 2011, the European Commission adopted Communication "Our life insurance, our natural capital: an EU biodiversity strategy to 2020"), aimed at halting the loss of biodiversity and ecosystem services in the EU by 2020. The Strategy had six main targets covering the areas of nature conservation, ecosystem services, sustainable agriculture and forestry, management of fish stocks, control over invasive alien species and the EU contribution to averting biodiversity loss at the global level, and 20 actions to help reach the main goal. In 2015, the European Commission reviewed the EU biodiversity strategy to 2020 at mid-term to determine whether we were on track to reach its targets. The review found that no significant progress towards the 2020 headline target had been made. To step up actions and bring us closer to meeting the goals of the EU Biodiversity Strategy to 2020, in May 2017, the European Commission adopted the Nature Action Plan (An Action Plan for nature, people and the economy).