Highlights
Tweet
The EU produced 295 million tonnes of cereals in 2018.
Tweet
In 2018, the drought in many regions of central and northern Europe was the main factor behind lower harvests of key crops.
Tweet
Cereal prices in the EU were an average 7.9 % higher in real (i.e. deflated) terms in 2018 compared to 2017.

This article is part of a set that is taken from Eurostat’s publication Agriculture, forestry and fishery statistics - 2019 edition.

Crop production is particularly sensitive to prevailing weather conditions at key times of the year. For example, depending on a plant's stage of development, heavy spring frosts can damage the growth of cereals and destroy fruit blossoms. Likewise, spring-to-summer droughts and heat waves can cause significant yield losses, while strong winds and heavy rainfall can make harvesting difficult and compromise quality.

Meteorological and hydrological conditions therefore play an important role in levels of crop production but they also have a knock-on effect on prices through the causal effect of supply and demand. This is true for the EU, as it is across the globe. It is for this reason that production levels and prices are brought together in this chapter.

Meteorological and hydrological conditions therefore play an important role in levels of crop production but they also have a knock-on effect on prices through the causal effect of supply and demand. It is for this reason that production levels and prices are brought together in this chapter. Of course, with the European Union covering such a large area and including such diverse climates, adverse weather conditions and extremes in one region are often offset by optimum conditions in another. However, where the production of certain crops is concentrated in a few regions, EU production levels will be particularly susceptible to weather conditions as well as to pest attacks.

The statistics on crop production in this article are shown at an aggregated level and have been selected from over 100 different crop products for which official statistics are collected.

Plants need sunlight, water, healthy soils, air and heat to grow. Among the meteorological factors, temperature and precipitation are of particular significance for yields and production levels. The 2018 crop year in the EU experienced extreme weather events in terms of both temperatures and rainfall [1]

Winter 2017-2018: the hardening of winter-sown cereals, which puts them into dormancy to withstand freezing conditions, was delayed due to widespread above-seasonal temperatures. As a result, frost-kill damage was limited. Large parts of the EU experienced a severe cold spell at the end of February to mid-March, which delayed spring sowing and hampered the growth and development of winter crops. High precipitation in the central belt running from France in the West through to Bulgaria in the East, further delayed spring and summer crop sowing. 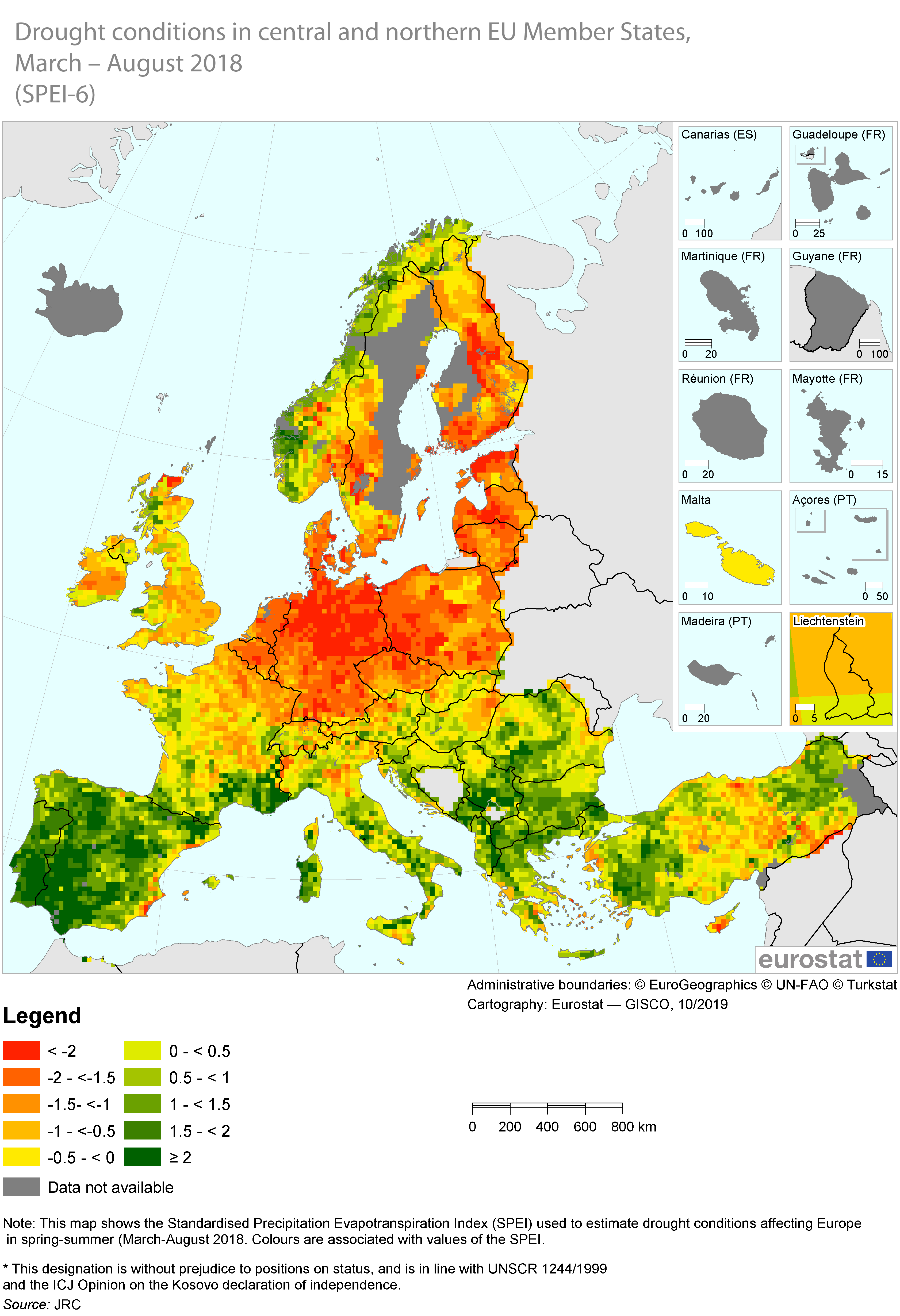 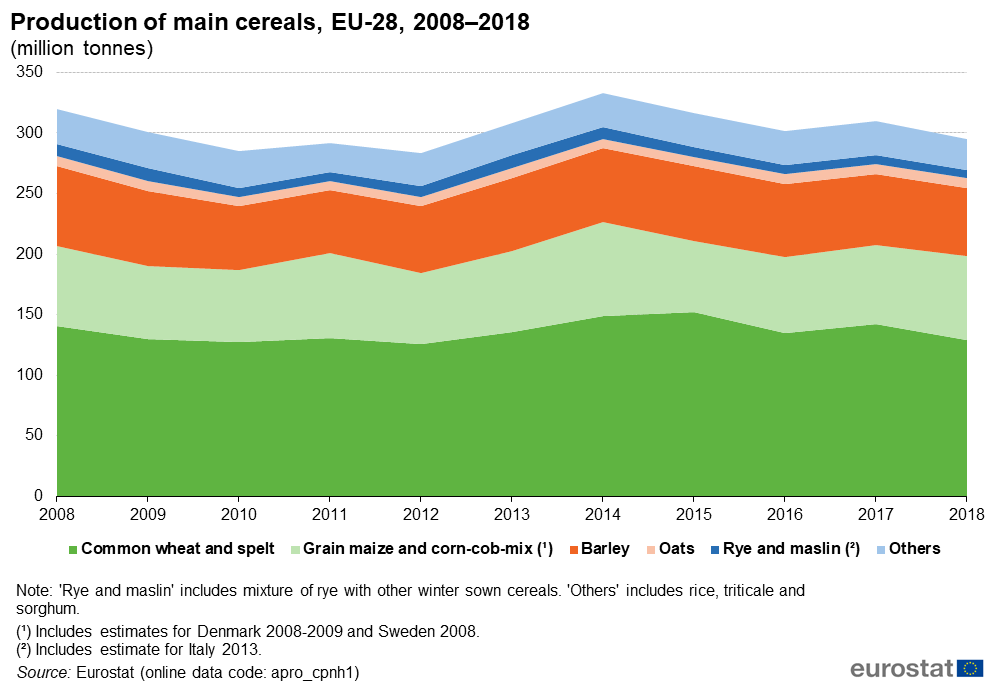 The drought in central and northern Europe led to lower production levels in many Member States. Among the main cereal producing Member States, production of cereals as a whole was lower in France (-8.7 %), Germany (-16.7 %) and Poland (-16.1 %), although the sharpest rates of decline were in the Baltic and Scandinavian Member States (for the most part between -20 % and -30 %, but with an even greater decline of -45.3 % in Sweden).

In contrast, production in southern Europe was boosted by the wetter than average spring and summer. Among the bigger cereal producing countries, production was considerably higher in Romania (+16.3 %) and Spain (+47.0 %).

Lower harvests for most cereals, with the exception of grain maize

The EU harvested 129.0 million tonnes of common wheat and spelt in 2018, representing 43.7 % of all cereal grains harvested (see Figure 2). This was 13.6 million tonnes less than in 2017, a decline of -9.5 %. The main reason for this decline was the drought in central and northern Europe, although the cultivated area of common wheat and spelt was also slightly lower (-1.6 %) than in 2017. In contrast, the harvested production of grain maize and corn-cob-mix (CCM) in the EU was 4.4 million tonnes higher in 2018 at 69.1 million tonnes, with much of that increase coming from much higher production levels in Romania (+30.3 %) and Hungary (+18.4 %). 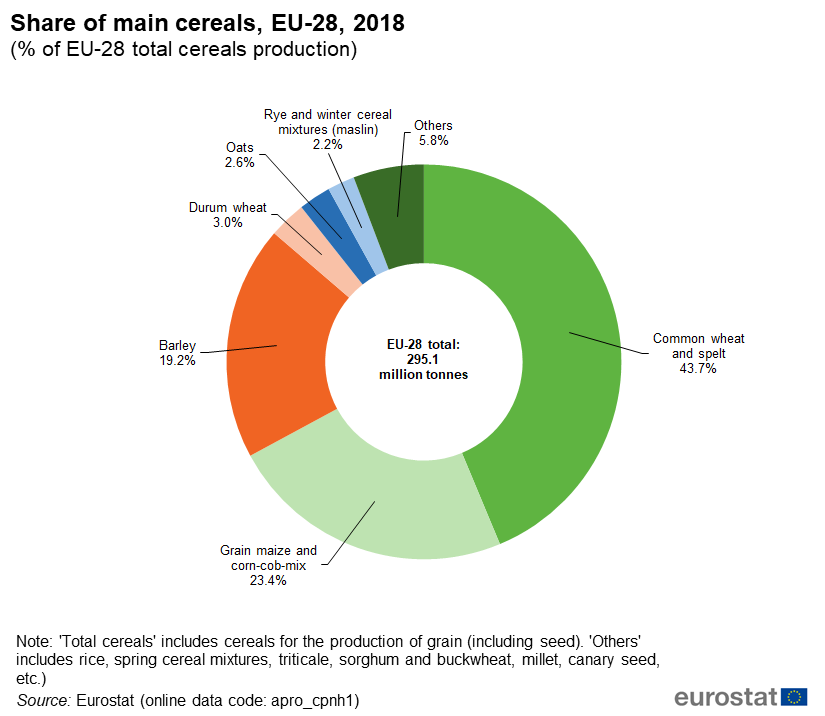 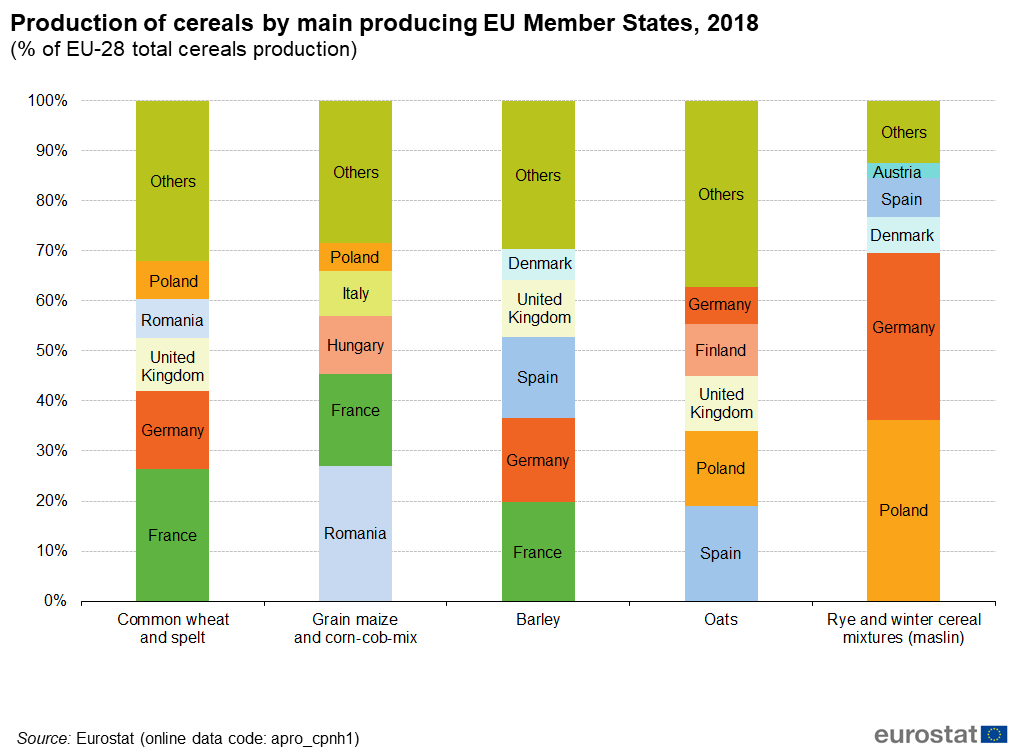 At a more detailed level, the EU regions with the largest production of wheat in 2018 were the two French regions of Centre – Val de Loire (3.4 % of the EU total) and Picardie (3.3 %). Other regions with considerable wheat production included the Spanish region of Castilla y Léon (2.8 % of the EU total), the German regions of Bayern (2.7 %) and Niedersachsen (2.0 %), the French regions of Champagne-Ardenne (2.4 %) and Nord-Pas-de-Calais (2.0 %), as well as the Romanian region of Sud – Muntenia (2.2 %) and the Lithuanian region Vidurio ir vakaru Lietuvos regionas (Central and West Lithuania) (2.1 %). The Spanish regions of Castilla y Léon and Castilla-la Mancha were the EU regions with the highest barley production in 2018 (5.3 % and 4.3 % respectively of the EU total). The German region of Bayern (Bavaria), renowned for its beer production, was another (3.4 %) along with the French regions of Centre - Val de Loire (3.3 %) and Champagne-Ardenne (3.3 %).

However, for all types of cereal, real terms prices remained between about 10-25 % lower than the recent peak price levels of 2012 (see Figure 4). The downward pressure on cereal prices in the intervening years was a result of a series of successive global record harvests. 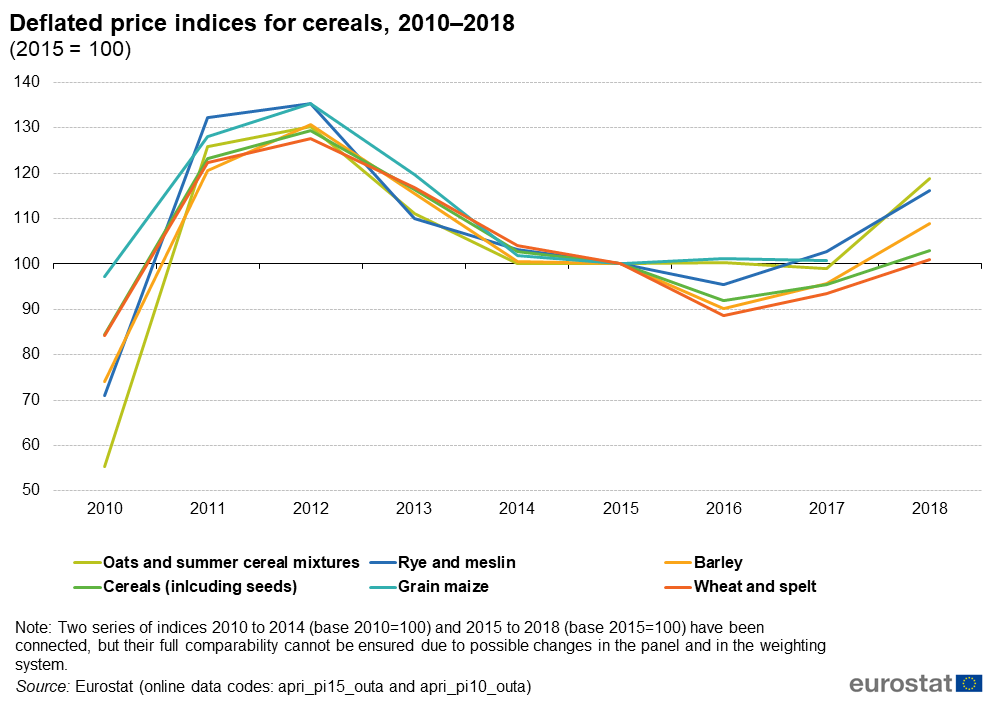 The EU sugar market was regulated by production quotas until September 2017. The European Commission's DG for Agriculture and Rural development has set up a Sugar Market Observatory in order to provide the EU sugar sector with more transparency by means of disseminating market data and short-term analysis in a timely manner.

Following the decision to end production quotas, the EU sugar sector - supported by the CAP - underwent a series of deep reforms to prepare it more effectively for the new challenges and opportunities this would bring. In 2017, EU farmers responded by sowing more sugar beet (the cultivated area being 17.2 % higher than in 2016). One year on, the area sown was slightly lower (-1.2 %). Droughts conditions in 2018, however, reduced yields considerably and the harvested production of sugar beet for the EU-28 fell sharply (-16.5 %). 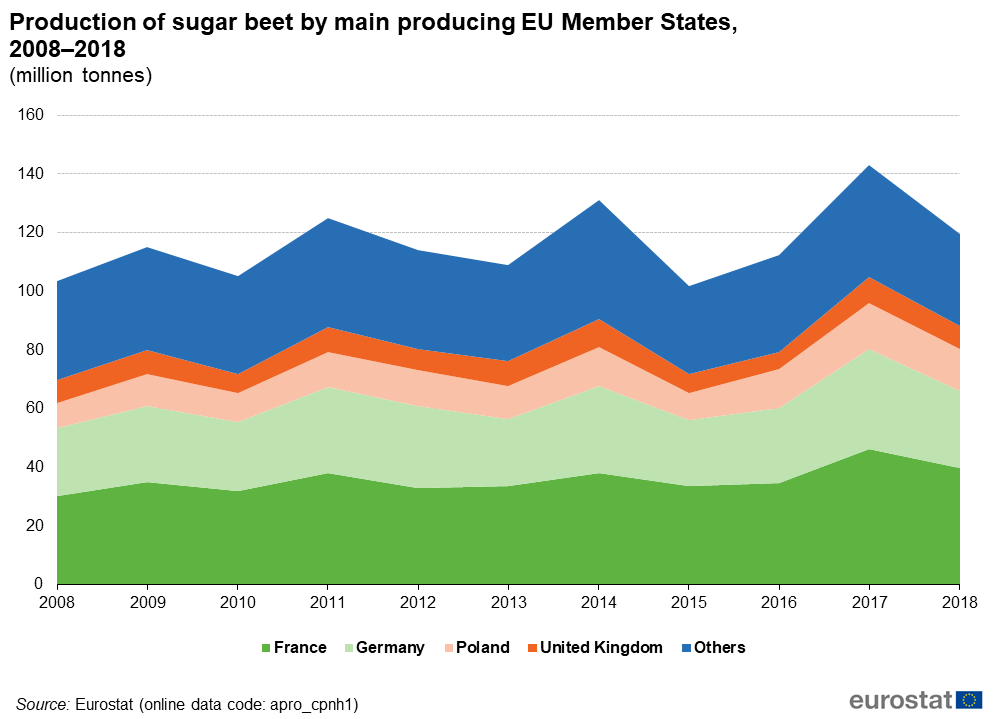 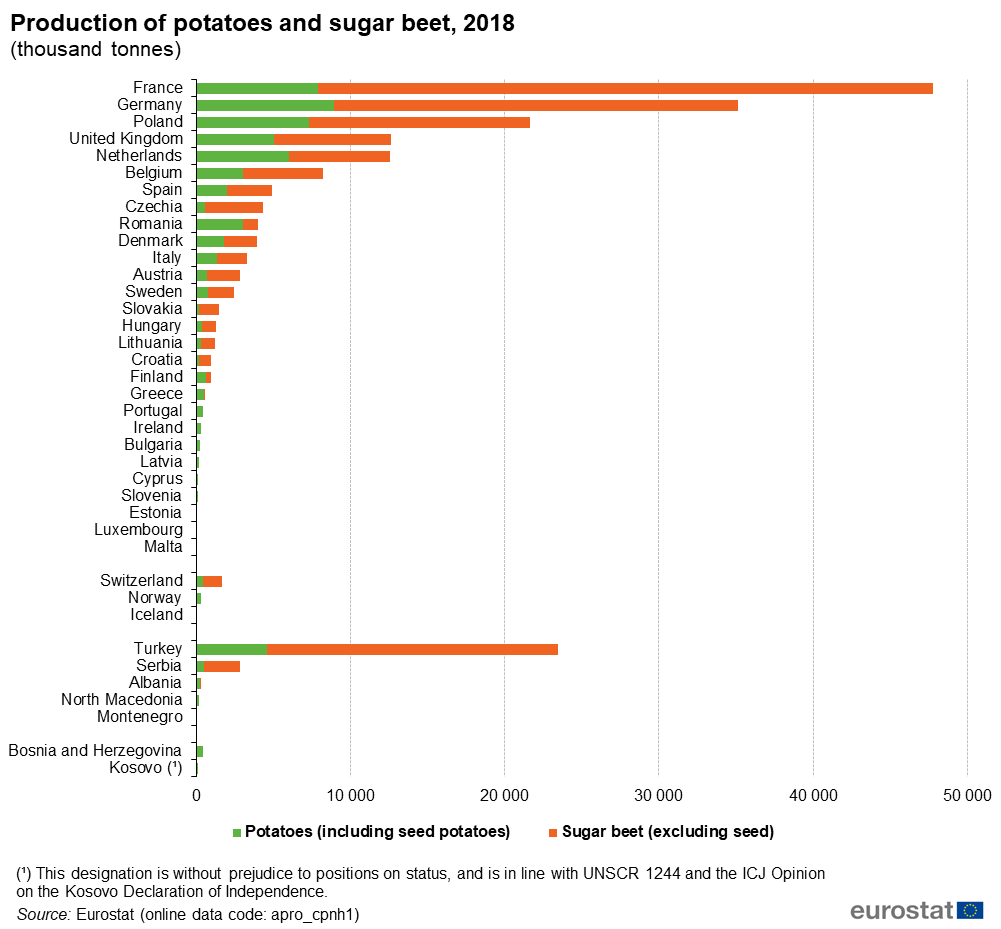 Lower real-terms price for sugar beet, despite much lower harvested production, but higher for potatoes

The price decline for sugar beet continued the downward path noted since 2013 (see Figure 7), as the market anticipated the end of production quotas and alignment with the global market. Within the recent upward trend in potato prices, there are sharp fluctuations that closely reflect annual fluctuations in harvested production levels. 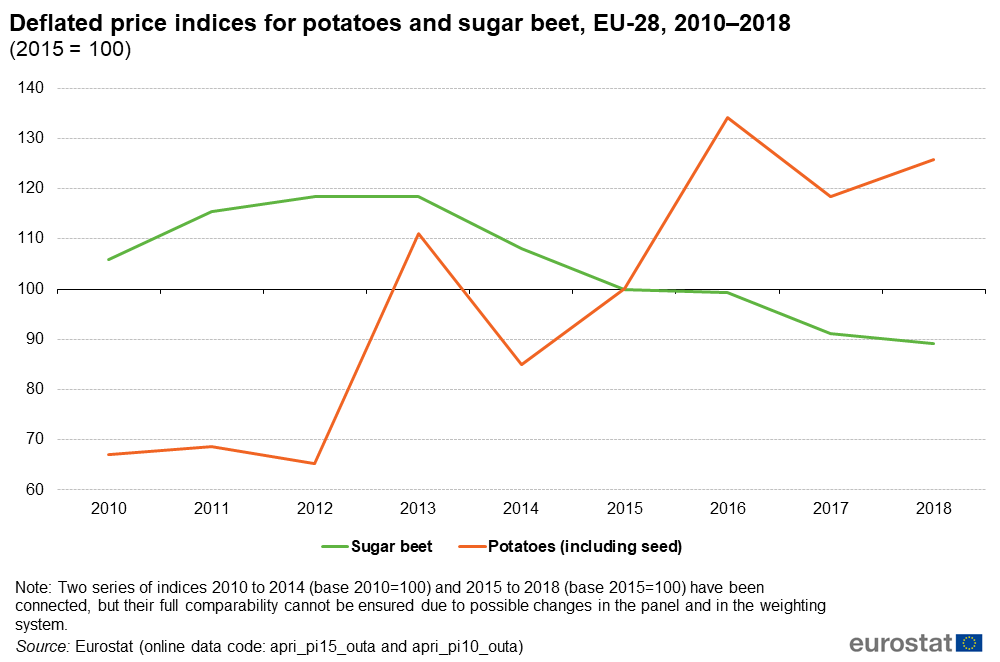 The EU cultivates three types of oilseed crop; the main two are rape and turnip rape, and sunflower but soya is increasingly grown. The EU produced 32.8 million tonnes of oilseeds as a whole in 2018, which was 2.3 million tonnes less than in 2017, a decline of -6.4 % (see Figure 8). 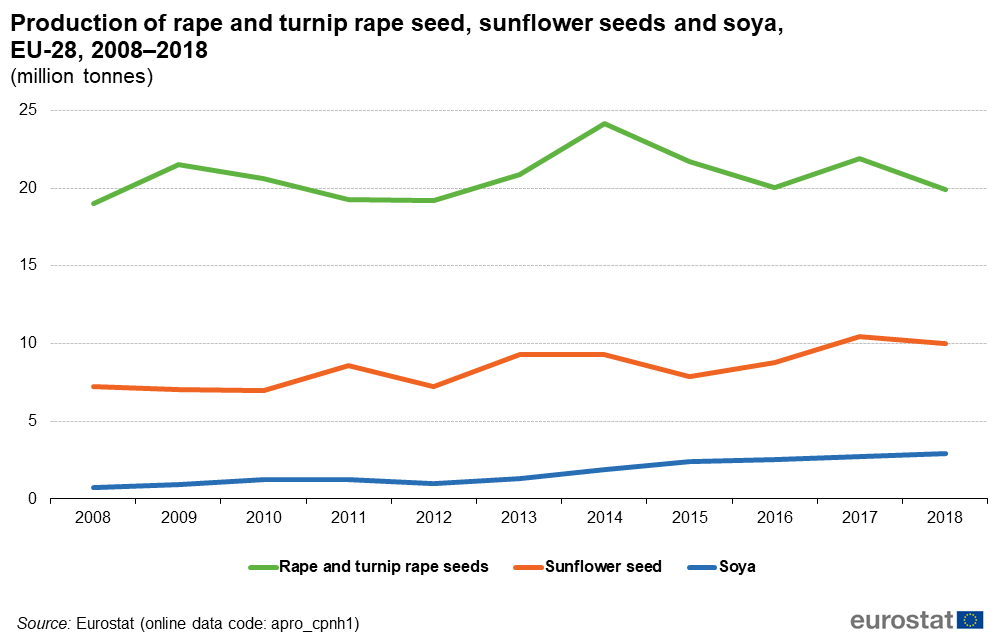 Real terms prices for oilseed crops all fell sharply in 2018 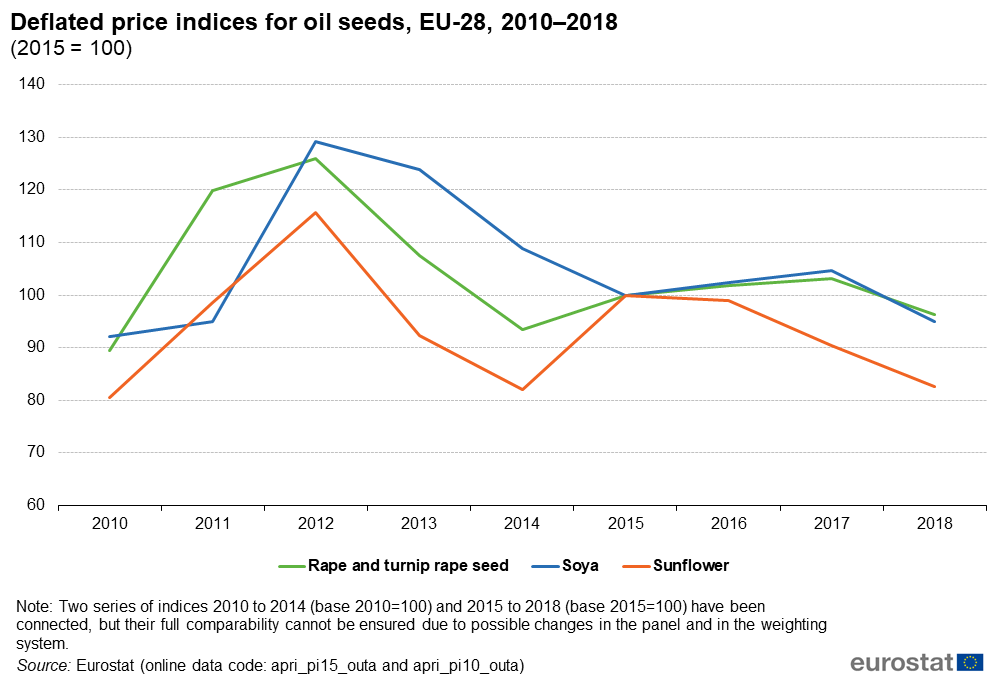 The EU supports the fruit and vegetable sector through its market-management scheme, which has four broad goals:

Spain and Italy remained the main EU producers of fruit; Spain accounted for a little under 30 % of total EU fruit production and Italy a little over one fifth. Nevertheless, for particular fruit other Member States were key producers.

Over one quarter of EU apple production in Poland. Over one half of all EU oranges from Spain 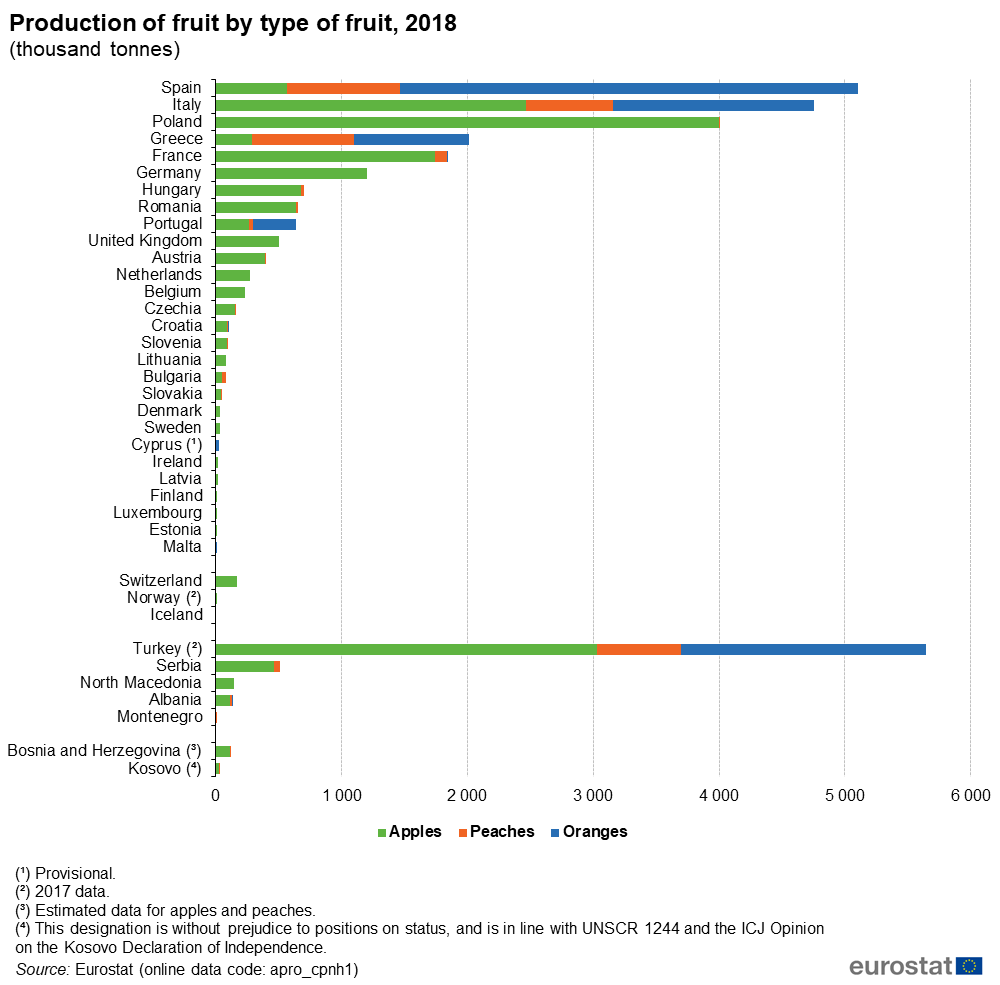 There are thousands of varieties of apple grown worldwide, many of which have been created and selected to grow in varied climates. This has enabled commercial apple production to take place in almost all Member States. Over one quarter (28.9 %) of the EU's apple production came from Poland in 2018, the other main producing Member States being Italy (17.8 %) and France (12.6 %). In contrast, orange production and peach production are much more restricted by climatic conditions (see Figure 10); over one half of the EU's 2018 orange production came from Spain (55.8 %), with most of the remainder coming from Italy (24.4 %) and Greece (14.0 %). Similarly, a little over 90 % of all peach production also came from Spain (34.2 %), Greece (30.9 %) and Italy (26.3 %).

Spain and Italy produced just under two thirds of the EU's tomatoes in 2018, with the Spain and the Netherlands producing a little over two fifths of onions 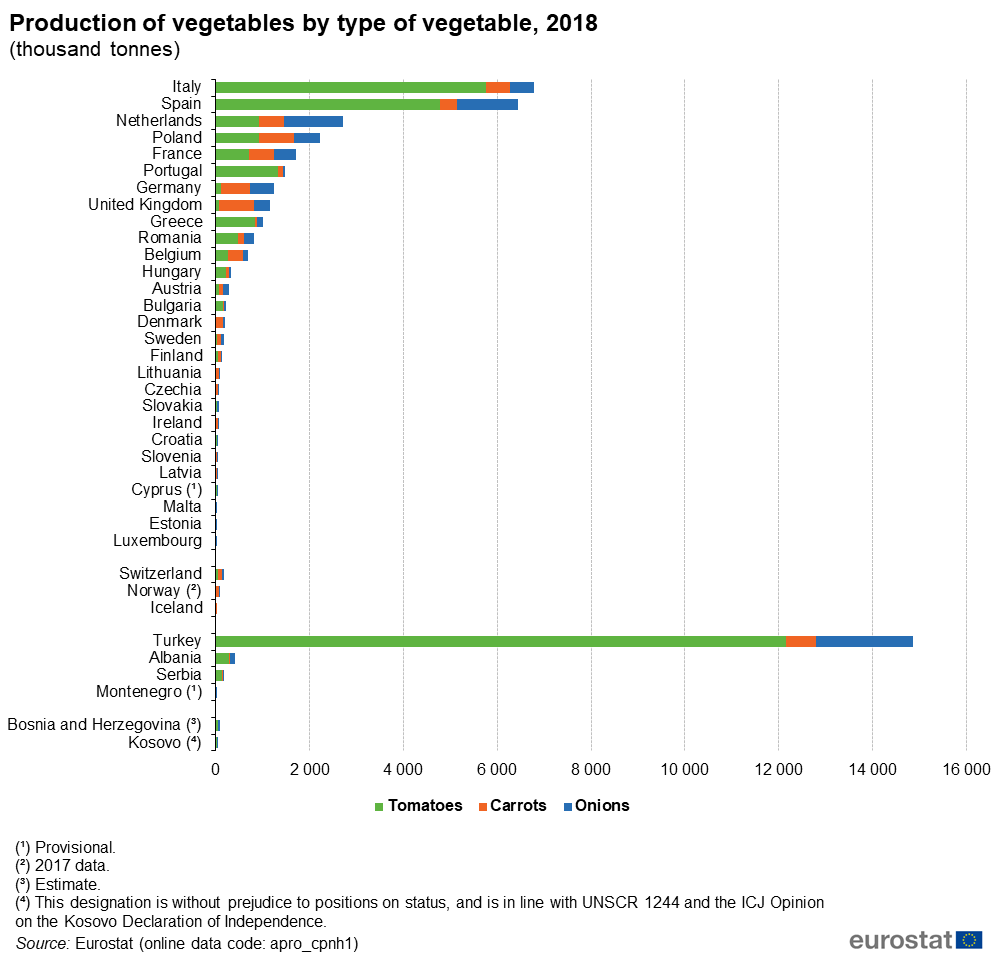 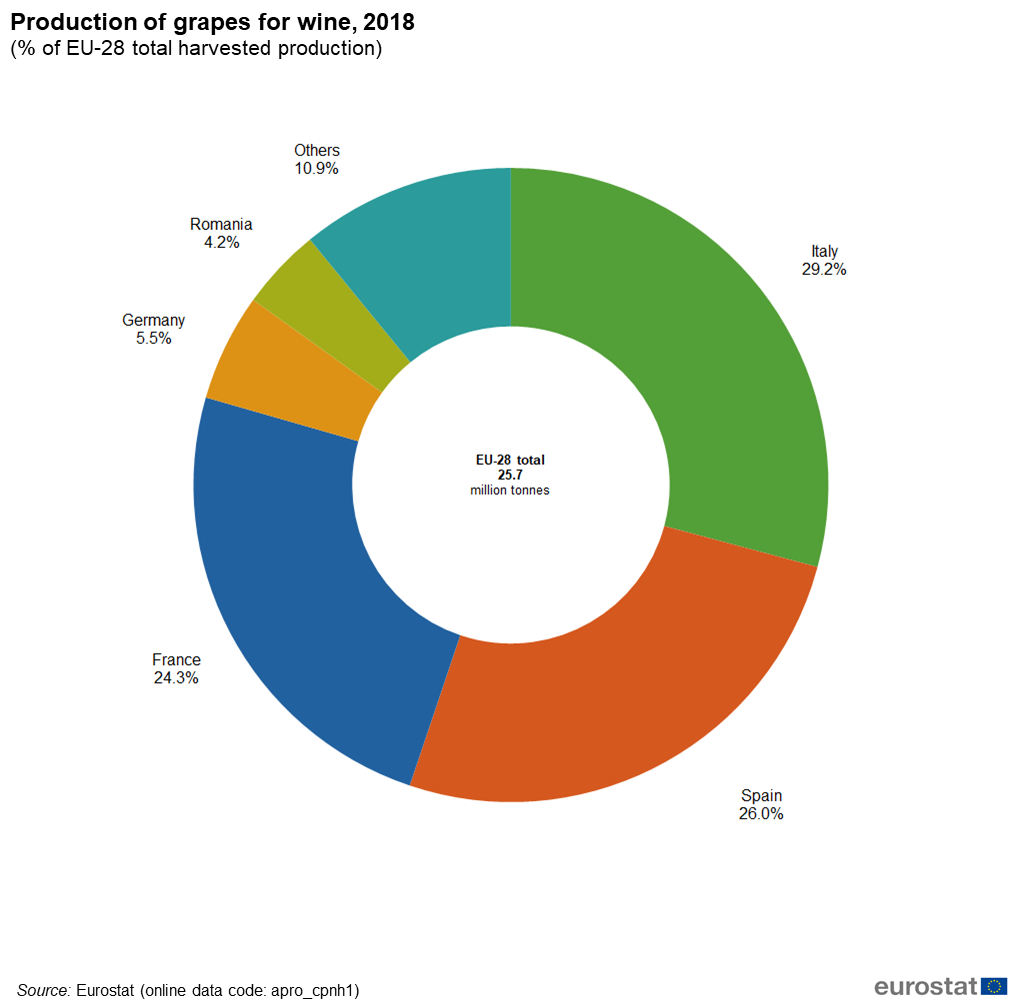 The EU is the largest producer of olive oil in the world, accounting for around two-thirds of global production. Most of the world's production comes from Southern Europe, North Africa and the Near East, as 95% of the olive trees in the world are cultivated in the Mediterranean region. With production concentrated in a relatively small area, the effects of a disease outbreak can have significant implications. For this reason, steps are being taken as a precautionary measure against the spread of the Xylella fastidiosa bacterium [4] which arrived in Italy in 2013. 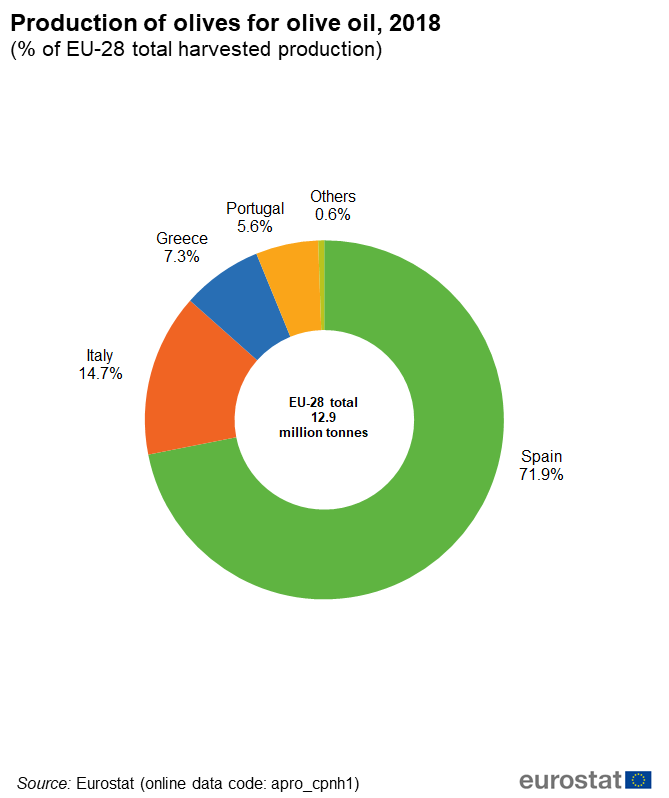 Statistics on crop products are collected under Regulation (EC) No 543/2009 and obtained by sample surveys, supplemented by administrative data and estimates based on expert observations. The sources vary from one EU Member State to another because of national conditions and statistical practices. National Statistical Institutes or Ministries of Agriculture are responsible for data collection in accordance with EU Regulations. The finalised data sent to Eurostat are as harmonised as possible. Eurostat is responsible for establishing EU aggregates.

EU agricultural price statistics (APS) are based on voluntary agreements between Eurostat and the Member States.

The National Statistical Institutes or Ministries of Agriculture are responsible for collecting absolute prices and calculating corresponding average prices for their country, as well as for calculating price indices and periodically updating the weights.

There is a diverse range of natural environments, climates and farming practices across the European Union (EU), reflected in the broad array of food and drink products that are made available for human consumption and animal feed, as well as a range of inputs for non-food processes. Indeed, agricultural products form a major part of the cultural identity of the EU’s people and its regions.