Impact of the COVID-19 crisis on EU services - latest information 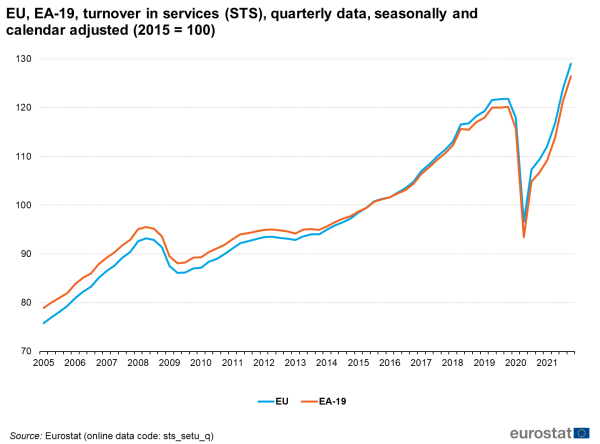 This article provides an overview of the development of the services turnover indicator in the European Union (EU), the euro area and the European Member states over recent years and describes how it is calculated. The index of turnover in (other) services is a business cycle indicator which measures the development of turnover in the European service industries, with the exception of public and financial services and services in retail and wholesale trade for which a separate indicator exists (hence "other" services; in this article the "other" will be omitted for easier readability).

Unlike the two other turnover indicators in short-term statistics for industry and for retail trade the services turnover indicators had in the past only a mandatory quarterly reference period. With Regulation (EU) No 2019/2152 (European Business Statistics Regulation, EBSR), which took effect in 2021, the data frequency changed to monthly. There is, however, a transitional period during which a full coverage of monthly data will only gradually be reached. However, in the past a number of countries already transmitted monthly data to Eurostat on a voluntary basis. On the basis of these voluntary data, monthly EU and EA-19 aggregates were produced by Eurostat (see below) in addition to the mandatory quarterly data.

The data presented in this article are taken from European short-term statistics (STS). The data on services collected encompass mainly – but not only – services consumed by businesses, therefore they are often referred to as "business services".

Between 2000 and 2008 the turnover of European service industries (as covered by the STS regulation expanded on a relatively steady growth path. A rapid decline set in during the last quarter of 2008 and within half a year the service turnover index for the EU declined by several percentage points. In the second half of 2009 a recovery set in. Between 2011 and 2014 the level of service turnover in the euro area increased only moderately. Since 2014, however, the growth of the indicator was rather dynamic.

During the Covid-19 crisis ,which began in early 2020, this development changed dramatically. A reduction in service turnover already took place in the first quarter of 2020, mainly because of a considerable decline in turnover in March. In the second quarter of 2020, service turnover then fell dramatically by double-digit rates. In the third quarter, a recovery set in which continued over the following months. In the last quarter of 2021, the level of EU services turnover was already several percent higher than before the pandemic.

Short-term statistics cover – with some exceptions – the following five service industries according to NACE Rev. 2 (NACE code in brackets): transportation and storage (H), accommodation and food services (I), information and communication services (J), professional, scientific and technical activities (M) and administrative and support services (N). The development of the turnover for these main service activities is represented in Figure 2. Transport and storage, professional, scientific and technical as well as administrative and support services show a rather similar development. They are also the biggest of the five service industries in terms of value added and therefore largely influence the development of turnover for total services. Accommodation and food services and likewise information and communication services generally show a somewhat steadier turnover development.

During the Covid-19 crisis, food and accommodation services were hit particularly hard. In the second quarter, the turnover generated by these service industries was reduced by more than 50 %. Moreover the graph shows that hotel and restaurant services were, unlike other service industries, also severely hit by the containment measures in the winter of 2021. On the other hand, information and communication services were only reduced by 4 % in the second quarter of 2020 and regained their pre-crisis level already in the third quarter. 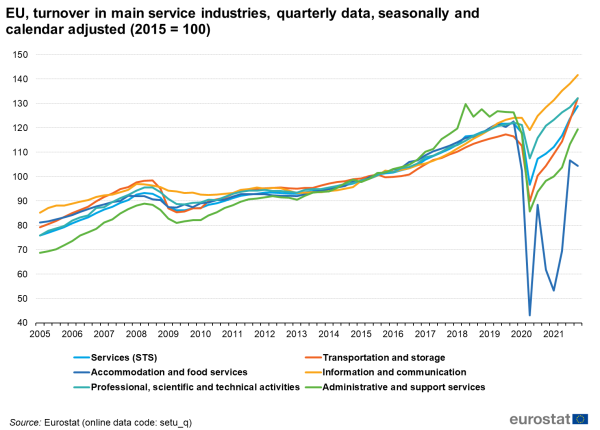 The effects of the Covid-19 crisis are clearly visible for the year 2020 when almost all countries for which data are available registered massive declines in services turnover (the only exception being Luxembourg).

Table 1 also indicates very different dynamics in the turnover development between Member States. On average the service turnover in the EU increased by around 56 % between 2005 and 2019. An example of a country with a relatively low turnover growth is Spain; in Greece the total service turnover even declined. Member States with an exceptionally fast growth were Lithuania, Romania, and Slovakia. 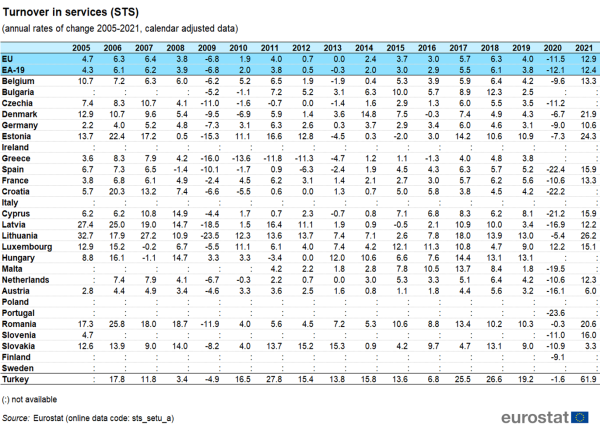 According to Council Regulation (EC) No 1165/98 of 19 May 1998 (the former STS Regulation), data on service turnover had to be made available by the National Statistical Institutes at least on a quarterly basis. With Regulation (EU) No 2019/2152 (European Business Statistics Regulation EBSR), which took effect in 2021, the data frequency changed to monthly. However, around half of the Member States collect these data (at least for some service industries) on a monthly basis. In some cases this data cannot be published by Eurostat (e.g. for reasons of confidentiality).

Figure 3 shows the development of the total service turnover indicator (as defined by STS) for the countries for which monthly data are available and not confidential. 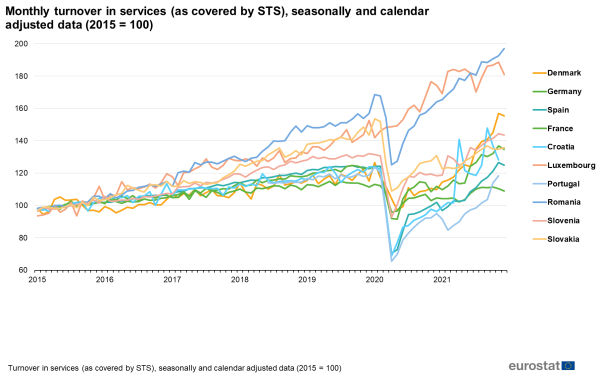 Depending on the specific service industry, the available monthly country data varies. On the basis of the available data, Eurostat already publishes estimated EU aggregates and even for EA-19 indices (for a more detailed description see the article on the STS index compilation)

Despite the fact that the monthly EU aggregates are not based on full coverage of European countries, the estimates give a good first indication of the development of the EU service turnover. To demonstrate this, Figure 4 compares the quarter on quarter growth rates calculated on the basis of the complete European data and the quarter on quarter growth rates based on the monthly data series (which, for this purpose, were first aggregated to quarterly data) on the basis of around half the European countries. 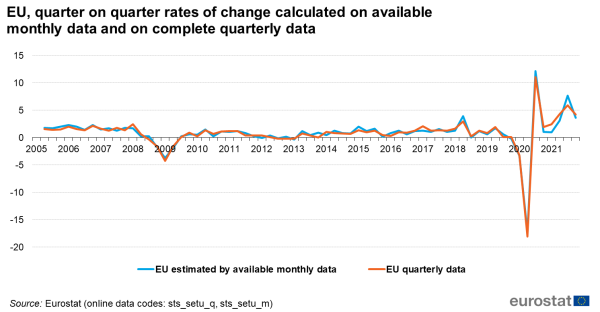 All results for the indicator of turnover in services are published on the Eurostat website.

The definition of turnover is rather straightforward. It comprises basically what is invoiced by the seller. Rebates and price deductions are taken into account as well as special charges that the customer might have to pay. Turnover does not include VAT or similar deductible taxes.

Information on service turnover is most often collected by business surveys. However, quite a number of National Statistical Institutes rely on administrative sources, i.e. VAT declarations, to obtain the data. There are also cases where both methods are used; for example bigger enterprises might be asked to contribute to a survey whereas the data for smaller enterprises area collected from VAT registers.