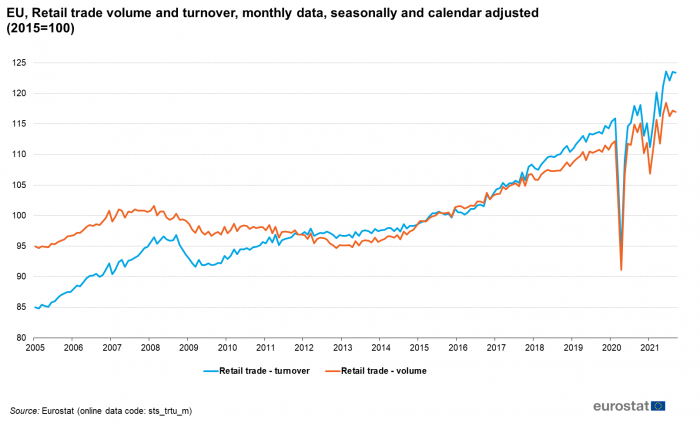 The index of the volume of retail trade is a business indicator which measures the monthly changes of the deflated turnover of retail trade both at the level of the European Union (EU) and euro area, and of individual EU Member States (as well as some candidate and EFTA countries). This article provides an overview of the development of the index over recent years and describes how it is calculated.
Please also see the monthly Eurostat News Release 7 January 2022.

After several years of steady increase, the volume of retail trade in the EU peaked in early 2008 (Figure 1). Afterwards a decline set in which lasted until mid-2013. Since the first half of 2013, the retail volume again increased relatively steadily and in the middle of 2019 reached a level of more than 10 percentage points (p.p.) above the level before the financial and economic crisis. With the Covid-19 crisis and national health prevention measures setting in during the spring of 2020, retail trade saw an unprecedented decline in March and April 2020. In the subsequent month, retail trade recovered almost as quickly as it had fallen and in late summer of 2020, the pre-crisis level had been more or less been regained. In the last quarter of 2020 and the first quarter of 2021, the retail trade volume dropped again. The decreases were quite considerable (e.g. -7 % between October 2020 and January 2021) but by far not as dramatic as during the first wave of the pandemic (see the special article on the impact of the COVID-19 crisis on EU retail trade).

Figure 1 not only shows the (real) volume of EU retail trade but also the (nominal) turnover indicator which combines both volume and price changes. The graphs of the volume and turnover measure suggest a rising level of prices until 2013 (with the exception of the financial crisis years). Since then the price development appears rather stable. During the Covid-19 crisis no significant change in the overall price level was observed. This situation changed in May/June 2021, however, when the turnover index began to increase much more dynamically than the volume index as a result of increasing consumer prices.

Turnover for retail and wholesale trade 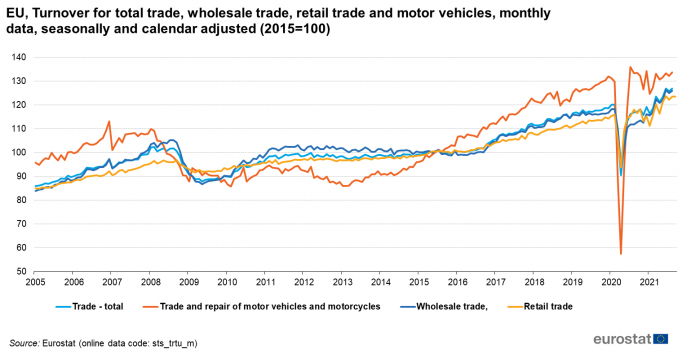 Figure 3 provides a breakdown of the retail trade volume for the three main product groups: non-food articles (excluding fuel); food, beverages and tobacco; and automotive fuel. The retail volume of food products (plus drinks and tobacco) reacted less strongly during the economic and financial crisis as well as during the Covid-19 crisis than the trade volume of non-food products. However both product groups generally developed in largely comparable ways.

The retail volume of fuel (sold in specialised stores, i.e. filling stations) has followed a less clearer trend since the year 2000 with temporary peaks in the summer of 2003, late 2006, early and late 2008. Between 2009 and 2012, a relatively steady decline could be observed, and since then the volume of fuel sales has increased again. During the Covid-19 crisis, with lockdowns in many European countries, the sales of automotive fuel dropped by more than 40 %. The sales of fuel recovered during the summer and autumn however without regaining the pre-crisis levels. 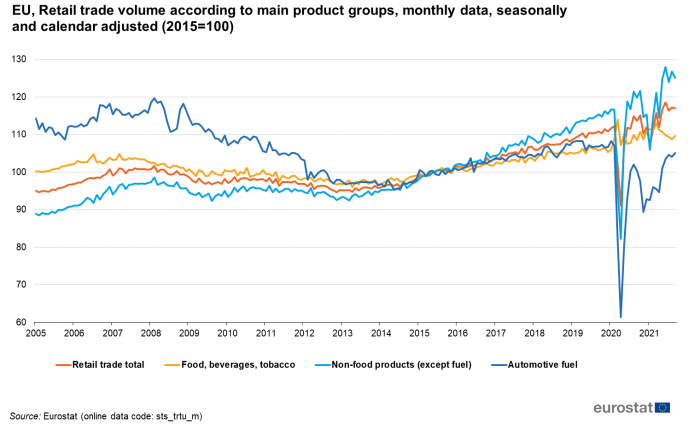 Figure 4 shows the development of the retail trade volume according to the type of sale (non-specialised stores with the sales of food and drinks prevailing, i.e. supermarkets, other non-specialised stores, i.e. department stores and internet sales). As can be seen, the sales via the internet have developed in a highly dynamic manner (starting from a low level in the early years). 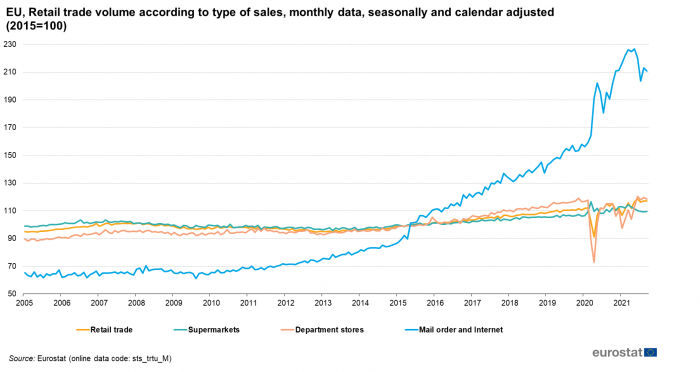 The retail trade volume in the EU Member States generally increased during the last decade, but the magnitude of the changes differ substantially (Table 1). Between 2005 and 2007, the year before the financial crisis, retail trade volume increased in almost all EU Member States (with the exceptions of Italy and Malta). Especially strong were the increases in Bulgaria, Romania and the Baltic countries. 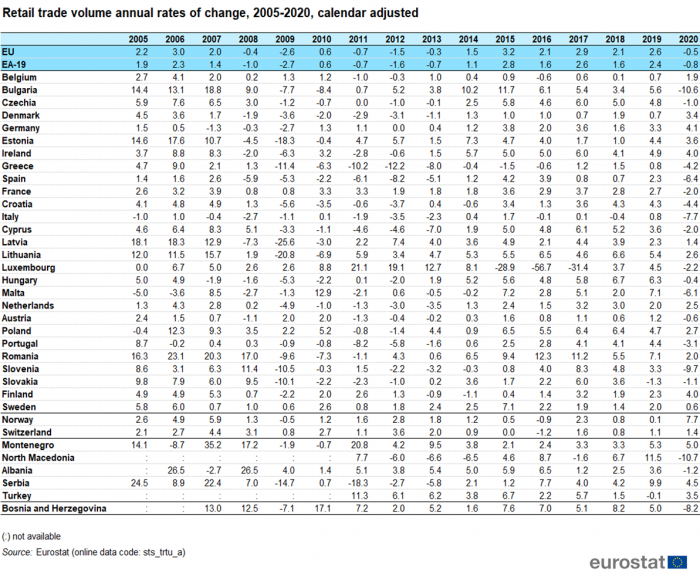 In most countries the dynamic development stopped in 2008 and 2009. In the Baltic countries the high pre-crisis growth rates were followed by comparatively high negative rates of change. Substantial decreases of more than 10 % in the years of the crisis were also observed in Greece, Spain, and Slovakia. Indeed, few EU-countries came through the crisis without any negative development of retail trade volume. During the years from 2010 to 2013 the overall development was still negative, however the decline was somewhat slower than in the years before. Since 2014 the recovery has been quite dynamic, especially high increases where observed in Bulgaria, Czechia, Ireland, Lithuania, Hungary, Poland, and Romania. The massive decrease of the figures for Luxembourg is due to the restructuring of a large multinational online retailer who moved its operations and turnover away from Luxembourg. The annual rates for 2020 clearly reflect the dramatic decreases that retail trade volume experiences in the spring of the year. Despite the recovery in subsequent months, the general development for the EU (-0,5 %) and the euro area (-0,8 %) were still negative in comparison with 2019. Exceptionally high negative rates of change were recorded in Bulgaria (-10,6 %), Slovenia (-9,7 %), and in Italy (-7,7 %). The highest annual increases in the retail trade volume were recorded in German (4,1 %), Ireland (4,0 %), and in Finland (4,0 %).

Regulation (EU) No 2019/2152 of 27 November 2019 (European Business Statistics Regulation) foresees the regular production and transmission of a retailed trade index for all National Statistical Institutes. The definition of retail trade volume as a deflated index of retail trade turnover is laid down in Commission Implementing Regulation (EU) No 2020/1197 of 30 July 2020. Retail trade turnover comprises the total invoiced by the statistical unit (observation unit) during the reference period. It includes all charges such as packaging and transport but excludes VAT and similar deductible taxes. (For more details see the glossary article on turnover in STS.) The volume of retail trade is conceptually different from the volume of retail trade services. The latter indicator (not available at European level ) does not relate to the sales as such but to the sales service provided by the retail businesses. Because of the methodological difficulties in construction a genuine sales service indicator the volume of retail trade is usually used as an approximation. The latest results for the development of retail trade are published in monthly news releases by Eurostat. Trade volume data are available on a monthly, quarterly and annual basis, in calendar adjusted and seasonally adjusted form (seasonal adjustment includes also calendar adjustment). All data are either available as indices or as growth rates. Eurostat publishes aggregated data for the EU, for the euro areas, the EU Member States and some other European countries (see above).

Retail trade generates around 5 % of the total value added of the European economies. The index of deflated retail turnover (retail trade volume) is the key European indicator for the short-term development of retail trade. The indicator is also one of the 'Principal European economic indicators (PEEI)' which are used to monitor and steer economic and monetary policies in the EU and in the euro area.