Promote sustained, inclusive and sustainable economic growth, full and productive employment and decent work for all 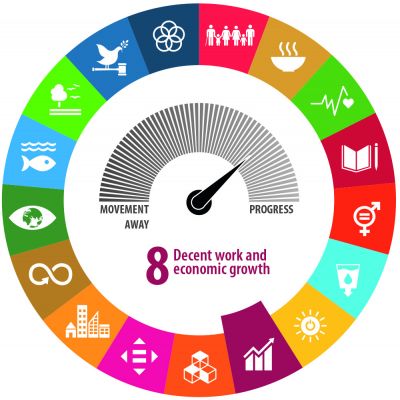 EU trend of SDG 8 on decent work and economic growth

This article provides an overview of statistical data on SDG 8 ‘Decent work and economic growth’ in the European Union (EU). It is based on the set of EU SDG indicators for monitoring of progress towards the UN Sustainable Development Goals (SDGs) in an EU context.

SDG 8 recognises the importance of sustained economic growth and high levels of economic productivity for the creation of well-paid quality jobs, as well as resource efficiency in consumption and production. It calls for opportunities for full employment and decent work for all alongside the eradication of forced labour, human trafficking and child labour, and the promotion of labour rights and safe and secure working environments.

Decent work and economic growth in the EU: overview and key trends

While economic growth is an important driver of prosperity and society’s well-being, it can also harm the environment it depends on. Therefore, to ensure the well-being of future generations, the EU has adopted a new growth strategy, the European Green Deal, aimed at transforming the Union into a modern, resource-efficient and competitive economy. The indicators selected to monitor this objective show that over the past few years Europeans have been enjoying economic growth, which has also become more sustainable. However, the positive trend is halted by the ongoing COVID-19 pandemic.

After several years of continuous growth, the EU economy contracted by 6.2 % in 2020

Citizens’ living standards depend on the performance of the EU economy, which can be measured using several indicators. One of these is growth in gross domestic product (GDP). Although GDP is not a measure of welfare, it gives an indication of an economy’s potential to satisfy people’s needs and its capacity to create jobs. It can also be used to monitor economic development.

Investment is another indicator of economic growth as it enhances an economy’s productive capacity. In 2020, the total investment share of GDP in the EU declined by 0.3 percentage points compared with the previous year as a result of the pandemic, reaching 22.1 %. This drop interrupted a period of a steady growth in investment observed since 2014 and can be attributed to a decrease in business investment in 2020.

Economic growth in the EU has become more sustainable

Using natural resources more efficiently reduces pressure on the environment from production and consumption and increases an economy’s competitiveness. Resource productivity, measured as GDP divided by domestic material consumption (DMC), monitors the relationship between what an economy produces and the physical materials it uses [3]. Hence, it depicts an aggregate measure of an economy’s material efficiency.

The EU has increased its resource productivity by 36.4 % since 2004, reaching EUR 2.1 per kilogram in 2019. This favourable development can be attributed to GDP growth accompanied by a 10.4 % decrease in DMC, which reflects such factors as the EU’s long-term shift towards a service economy, globalisation and increasing reliance on imports [4].

A closer look at the underlying developments from 2004 to 2019 shows some initial years of coupling of DMC and GDP until the onset of the economic crisis in 2008, followed by a period of relative decoupling between the two indicators in the crisis’ aftermath and up to 2019. The increase in resource productivity should therefore be interpreted with caution and should not be contributed entirely to the success of environmental policy. It is likely that the observed trend was influenced by a number of other factors, such as a drop in DMC due to the economic crisis [5]. Indeed, the past five years have seen a 3.9 % growth in the EU’s material consumption alongside the strong economic expansion reported above. Consequently, the short-term trend has only seen a relative decoupling of DMC from GDP.

Decent employment for all — including women, people with disabilities, youth, the elderly and migrants — is a cornerstone of socio-economic development. Apart from generating the resources needed for decent living standards and achieving life goals, work provides opportunities for meaningful engagement in society, which promotes a sense of self-worth, purpose and social inclusion. Higher employment rates are a key condition for making societies more inclusive by reducing poverty and inequality in and between regions and social groups.

Prior to the COVID-19 pandemic, the EU employment rate exhibited an upward trend, reaching a record high of 73.1 % in 2019. The growth over the past decade can be partly attributed to increased participation in the labour force by older workers and women [6]. However, as a consequence of the coronavirus pandemic and its severe socio-economic impacts, the employment rate fell back to 72.4 % in 2020, which is the same level as in 2018.

Long-term unemployment usually follows the trends in unemployment, but with a delay, meaning that the effects of the COVID-19 pandemic will only become visible in data from 2021. Being unemployed for a year or more can have long-lasting negative implications for individuals and society by reducing employability prospects, contributing to human capital depreciation, endangering social cohesion and increasing the risk of poverty and social exclusion. Beyond material living standards, it can also lead to a deterioration of individual skills and health, thus hindering future employability, productivity and earnings. In 2020, 2.5 % of the EU’s active population had been unemployed for a year or more, which is 3.0 percentage points less than at the peak of the long-term unemployment rate in 2014. The proportion of long-term unemployment in total unemployment has also decreased over the past few years [8].

The economic growth observed over the past few years has also helped to improve the labour market situation of younger people, with the employment rate of 20- to 24-year-olds growing steadily between 2014 and 2019. Nevertheless, their employment prospects remain precarious and they were hit harder by the COVID-19 crisis than older age groups. This is because young people are more likely to have a fixed-term contract or to work in sectors affected by the restrictions placed on economic activities, such as the service sector, to tackle the pandemic [9]. In 2020, employment rate of people aged 20 to 24 stood at 48.7 % [10] compared with the total employment rate of 72.4 %.

Young people not engaged in employment nor in education and training (NEET) are among the most vulnerable groups in the labour market. Over the long term they may fail to gain new skills and suffer from erosion of competences, which in turn might lead to a higher risk of labour market and social exclusion. Between 2004 and 2019, the NEET rate for 15- to 29-year-olds in the EU closely followed the economic cycle, improving from 15.6 % to 12.6 % over the period. As a result of the COVID-19 pandemic, the NEET rate increased again to 13.7 % in 2020.

Women’s participation in the labour market is increasing, but gender differences persist

Over the past 15 years, the employment rate of women in the EU has been increasing and reached a new high of 67.3 % in 2019 before decreasing to 66.8 % in 2020 due to the COVID-19 outbreak. Moreover, the gender employment gap continues to persist and has stagnated in the short term since 2015, despite narrowing by 5.1 percentage points since 2005. In 2020 it amounted to 11.3 percentage points, despite women increasingly becoming well qualified and even outperforming men in terms of educational attainment (see the article on SDG 4 ‘Quality education’).

The impact of parenthood and caring responsibilities remains one of the main drivers of lower employment rates for women. Inflexible work-life-balance options and underdeveloped care services — both for childcare and long-term care of a family member — are major impediments to women remaining in or returning to work. In 2019, 32.3 % of inactive women aged 20 to 64 were in this situation because they were caring for children or incapacitated adults, compared with only 4.5 % of men. Since 2014, this gender gap has widened by 3.1 percentage points.

For a society’s sustainable economic development and well-being it is crucial that economic growth generates not just any kind of job but ‘decent’ jobs. This means that work should deliver fair income, workplace security and social protection, and allow flexibility of working arrangements and hours.

Over the past few years, work in the EU has become safer and more economically secure

A prerequisite for decent work is a safe and healthy working environment, without non-fatal and fatal accidents. Over the past few decades, the EU and its Member States have put considerable effort into ensuring minimum standards in occupational health and safety. In 2018, the rate of fatal accidents at work amounted to 1.8 fatalities per 100 000 employed persons, with the mining and quarrying sector being particularly prone to the risk of fatal accidents [11]. While there has been a significant decrease since 2010, a noticeable gender difference persists: in 2018, the incidence rate for women was only 0.2 per 100 000 persons, compared with 3.1 for men. This might be due to the fact that activities with the highest incidence rates are mostly male-dominated [12].

Besides safety at work, fair income and social protection are other important components of decent work. Poverty is often associated with the absence of a paid occupation but low wages can also push some workers below the poverty line. People working part-time or on temporary contracts are especially affected by in-work poverty [13]. The share of the so-called ‘working poor’ (aged 18 and over) increased almost continuously from 2010 to 2016 in the EU. However, the share has decreased since then, affecting 9.0 % of employed people in 2019.

Factors influencing in-work poverty rates include, among other things, type of contract, working time and hourly wages. While a fixed-term or part-time contract may provide greater flexibility for both employers and workers, it is not always a personal choice for an employee and can thus significantly influence their well-being. In 2020, 6.8 % of European employees aged 20 to 64 were involuntarily working on temporary contracts, corresponding to 54.4 % of all temporary employees. This share has decreased slightly over the past few years [14]. Similar to involuntary temporary employment, the share of involuntary part-time employment in total employment in the EU also decreased, from 5.9 % in 2015 to 4.4 % in 2020 [15].

Inclusive green economic growth and decent employment are of key importance for the development and prosperity of European countries and for the well-being and personal fulfilment of individuals. For economic growth to be truly sustainable, it needs to be accompanied by eco-efficiency improvements, climate action and resilient measures, alongside active labour market and social inclusion policies, in order to ensure that the transition to a climate neutral economy is just and inclusive. Sustainable economic growth thus also means generating employment opportunities for all and improving working conditions for those already in employment and supporting citizens in their labour market transitions.