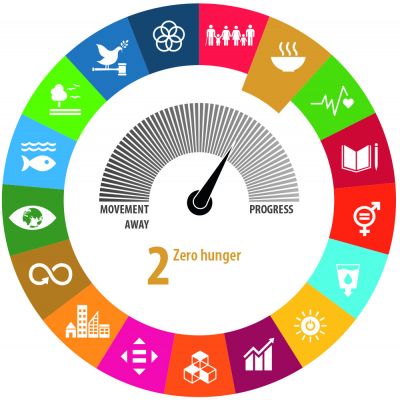 EU trend of SDG 2 on no poverty

This article provides an overview of statistical data on SDG 2 ‘Zero hunger’ in the European Union (EU). It is based on the set of EU SDG indicators for monitoring of progress towards the UN Sustainable Development Goals (SDGs) in an EU context.

SDG 2 seeks to end hunger and malnutrition and ensure access to safe, nutritious and sufficient food. Realising this goal will largely depend on promoting sustainable production systems and increasing investment in rural infrastructure and agricultural research and development.

Zero hunger in the EU: overview and key trends

Good nutrition means an adequate, well-balanced diet that meets the body’s dietary needs. Combined with regular physical activity and the avoidance of excessive alcohol consumption and tobacco use, good nutrition is a cornerstone of good health. While ending hunger and all forms of malnutrition are key objectives of the 2030 Agenda, in Europe and in other parts of the world it is obesity that presents the most serious nutrition-related health issue.

Obesity is a malnutrition problem related to changing consumption and activity habits. Combining a balanced nutritional diet with an adequately active lifestyle poses a challenge for many people. While the causes of obesity vary for each person, the problem is generally attributed to poor diets that are high in fat, salt and sugar; lifestyle choices characterised by low physical activity and high caloric consumption; and sociological and hereditary factors.

Obesity is a significant health issue in the EU, affecting almost 15 % of the adult population in 2017. Obesity is also a contributing factor in non-communicable diseases, such as cancer, cardiovascular diseases and diabetes. It also disproportionately affects people with lower levels of education and generally tends to increase with age until late in life.

Labour productivity in EU agriculture has increased, but investment in the future of farming lags behind

To ensure its long-term viability, Europe’s agricultural sector needs to achieve economic sustainability. Labour productivity is an important component of this and can be measured using the indicator ‘agricultural factor income per annual work unit (AWU)’.

Following a dip during the economic crisis in the late 2000s, agricultural factor income per AWU has been rising in Europe. By 2020 it was 27.2 % higher than it was in 2010. This is mainly due to strong growth between 2009 and 2011 and again between 2016 and 2017, driven partly by increased output values (prices and/or yields) and partly by a reduced labour force.

Investment in agricultural research and innovation is crucial for decoupling agricultural productivity from environmental impacts. Such investments also help to keep EU farmers competitive and adaptable to challenges such as climate change and feeding a rising population. Overall in the EU, national government support to agricultural research and development has risen in the short term, growing by 14.2 % between 2014 and 2019, reaching EUR 2.9 billion in 2019.

Risks related to pesticides use have been decreasing in the EU. The harmonised risk indicator for pesticides captures the trend in both the amount of active substances sold in plant protection products (as a proxy for pesticide use) and the differing risk levels of these active substances. The pesticide reduction target for 2030 currently cannot be monitored with this indicator. Data for 2018 show a 17.0 % reduction in the overall risk to human health and the environment from pesticides in the EU compared with the 2011–2013 average. An analysis by substance groupings shows that the use of and hence risk from non-approved active substances decreased while the use of low-risk active substances increased. Compared with the 2011–2013 average, by 2018 the overall pesticide risk had decreased in 20 Member States but had risen in the other seven.

Agriculture provides environmental benefits such as maintaining specific farmland ecosystems and diverse landscapes, and by providing carbon sinks. However, considerable increases in agricultural productivity and a move towards industrial agriculture practices have contributed to the degradation of environmental conditions and climate change. Environmental impacts of agriculture include nutrient-related pollution, soil erosion and loss of biodiversity.

Excessive nutrient inputs are threatening the environment and water quality

Ammonia emissions and nitrates in groundwater are linked to excessive inputs of nitrogen from agricultural sources such as mineral fertiliser and livestock manure. Manure produced by livestock is rich in nutrients such as nitrogen (ammonia and nitrates) and phosphorus, and is used as a fertiliser alongside chemical fertilisers. Excess nutrients that are not taken up by plants are released into the environment (as ammonia in air and as nitrates and phosphorus in water). When released into the atmosphere, ammonia pollutes the air and can land on soil and water, where it can harm sensitive vegetation systems, biodiversity and water quality through eutrophication and acidification.

Since the 1990s, Europe has seen significant decreases in its ammonia emissions from agriculture due to reductions in livestock density and nitrogen fertiliser use as well as changes in agricultural practices. In recent years, however, this trend has reversed, showing a slight increase over the past five years. After reaching a low of 3.20 million tonnes in 2012, emissions of ammonia rose to 3.24 million tonnes in 2018. It must be noted that the national and EU totals might mask considerable variations in fertiliser application and livestock densities at regional and local levels.

The amount of nitrates in EU groundwater remained fairly stable at around 21 milligrams per litre (mg/L) between 2000 and 2013 but has recently started increasing, reaching 22.0 mg/L in 2018. In addition, hot spots exist where the nitrates concentration is above 50 mg/L, which is the limit set for drinkable water. Several countries among those with the highest ammonia emissions per hectare of utilised agricultural area in Europe, such as Malta, Cyprus, Belgium and Germany, are also struggling the most with high nitrates levels in groundwater.

The agricultural sector is also responsible for considerable quantities of greenhouse gas (GHG) emissions [2], accounting for about 10 % of total GHG emissions in the EU in 2018. While total emissions have been falling across the EU (see the article on SDG 13 ‘Climate action’), GHG emissions from the agricultural sector have broken away from this trend and started slowly rising again in 2013. By 2018 they had reached almost 400 million tonnes of CO2 equivalent, although this figure is still far below the 1990 level of 497 million tonnes [3].

Soil erosion remains a major threat, but signs of improvement exist across the EU

Healthy soils are essential for sustainable and productive agricultural systems. Because soils take years to form, they can be considered a non-renewable resource for food production. One of the biggest threats to soil health in Europe is soil erosion, which can be caused by both wind and water. Though erosion is a natural process, inappropriate land management and other human activities can cause it to accelerate to such an extent that soil can be irreversibly lost. The indicator on estimated soil erosion by water provides a measure of the area at risk of severe soil erosion (leading to the loss of more than 10 tonnes of soil per hectare per year).

Some agricultural landscapes provide valuable and unique habitats for a host of species, both common and threatened. However, biodiversity has suffered under growing pressure from the race to increase productivity and where ecosystem services, which are provided by features that support biodiversity, have not been given economic value or adequate regulatory protection. Species related to agroecosystems are likely to have fared worse without the agri-environmental measures contained in EU policies, primarily the Common Agriculture Policy, but measures have not yet been effective enough to halt overall biodiversity loss in agricultural habitats [5].

Achieving healthy diets and ensuring agricultural systems remain productive and sustainable are the key challenges associated with SDG 2 in the EU. Unlike many areas of the world facing hunger, the EU’s central nutritional issue is obesity, which can also harm health and well-being and adversely affect health and social systems, governmental budgets and economic productivity and growth. Furthermore, sustainable and productive agricultural systems are essential for ensuring a reliable supply of nutritious food. This is especially important in the face of challenges such as climate change and population growth. However, although Europe’s agricultural productivity has increased in recent decades — and there are signs of more environmental friendly practices such as reduced pesticide use and an increase in the agricultural area under organic farming — certain ongoing negative environmental impacts of farming threaten the long-term sustainability of agricultural production and the ability to provide healthy and sustainable food. In this respect, shift towards healthier diets has the potential to reduce the pressure on agricultural land and improve biodiversity, while decreasing greenhouse gas emissions and generating significant co-benefits for human health.