The article focuses on the last dimension of the '8+1' quality of life indicators framework, overall experience of life. The first eight quality of life dimensions focus on various individual aspects such as material living conditions, living environment or employment, which are often analysed from both an objective and a subjective perspective as no assessment of quality of life can be complete without taking into account the overall subjective well-being of persons, which is perhaps the only way to integrate the diversity of the experiences, choices, priorities and values of an individual.

Information about the well-being of EU citizens come from the EU-SILC data collections of 2013, 2018 and 2021. As shown in Figure 1, in 2021 Europeans rated their satisfaction with life on average at 7.2 points on a scale from 0 (very dissatisfied) to 10 (very satisfied). It was highest in Austria (8.0), Finland (7.9) and Romania (7.7) and lowest in Bulgaria (5.7), Hungary (6.5) and Latvia (6.7). Cyprus, Croatia, France and Greece showed quite low levels of satisfaction at 6.8. However, in most countries (with the exception of Bulgaria) average levels of life satisfaction were higher than 6 (i.e. satisfied rather than dissatisfied). 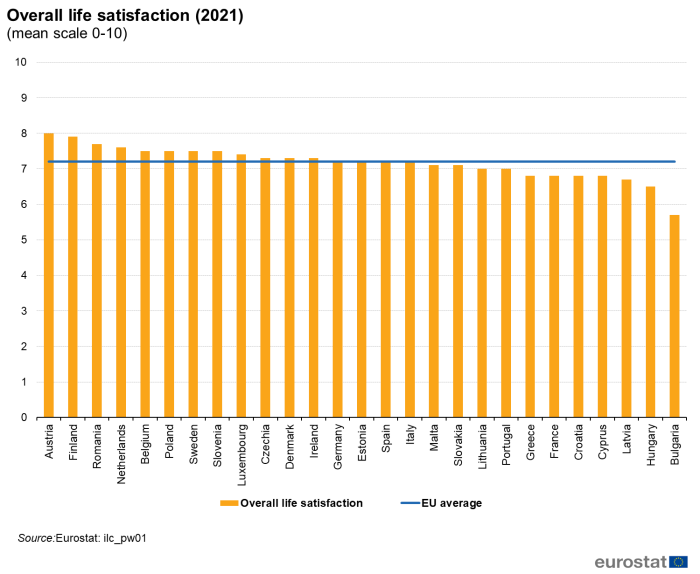 It is interesting to note that some countries associated with low levels of income in the recent past (as indicated for example by PPP adjusted GDP per capita), such as Romania, Poland and Czechia, are among the countries where life satisfaction is high – showing the complexity of the relation between subjective well-being and economic welfare.

When looking at the results from all survey years available (2013, 2018 and 2021), the average life satisfaction was consistently at the higher end of the scale in Austria, Finland, the Netherlands, Sweden, Denmark, Luxembourg and Ireland. While for Bulgaria, Hungary, Latvia, Cyprus, Croatia, Greece, Portugal and Lithuania the results were consistently at the other end of the scale. Nevertheless, in some of these countries, life satisfaction increased considerably during the past decade. This development has led to a convergence of life satisfaction at EU level in recent years. In these countries - but not only - a significant part of the population, the older generations, experienced lasting and significant change in the economic, social, welfare and political circumstances of their lives.

Some countries showed a steady increase in life satisfaction over the 2013-2021 period: notably Bulgaria, which showed the highest increase of 0.9 points, followed by Portugal (0.8), Estonia (0.7), Romania, Greece and Cyprus (0.6), Italy and Croatia (both 0.5). On the other hand, Denmark (-0.7 points), Sweden (-0.4) and the Netherlands (-0.2) show a decrease. However, in these countries, the general life satisfaction remained among the highest in the EU. 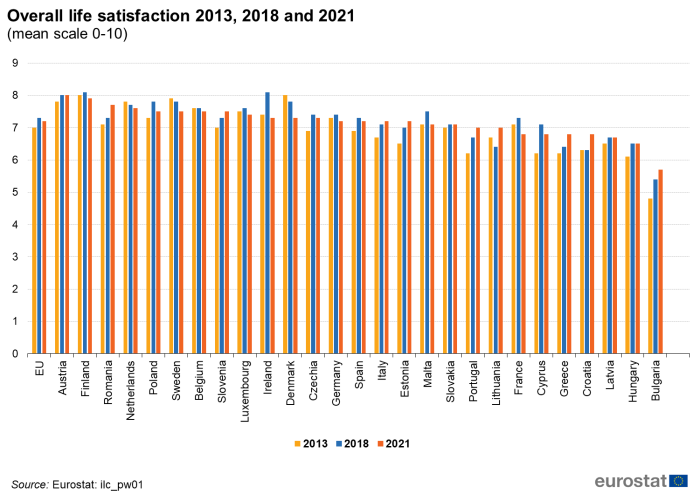 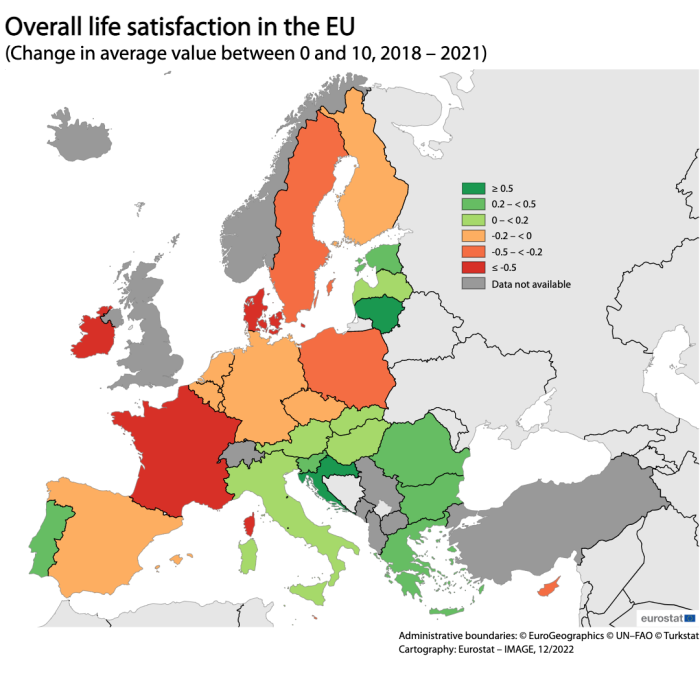 As shown in Figure 3, generally men are a little more satisfied with their lives than women. Only in five Member States was the situation – albeit with a small margin – the opposite: Estonia, Latvia, Finland, Germany and Sweden. When comparing 2021 results with 2018 across the EU Member States, the life satisfaction of men and women changed in a similar manner regardless of the direction of the change. 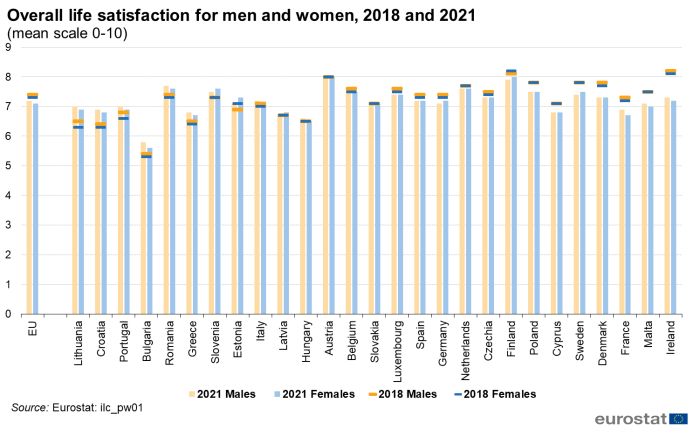 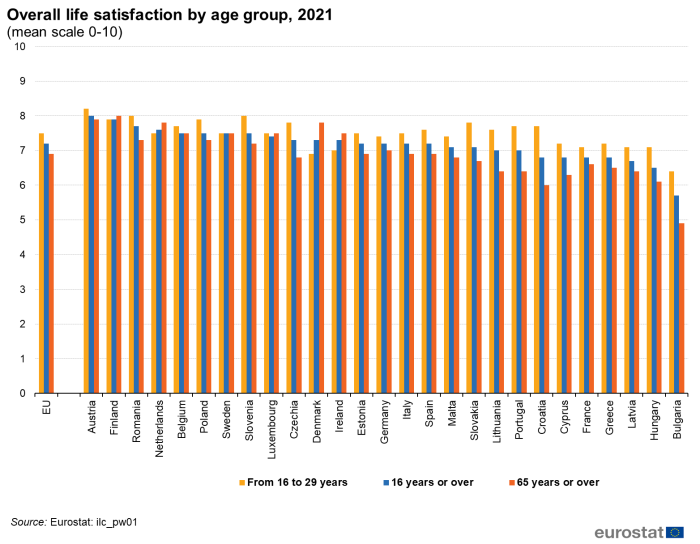 In addition to the effect of age, life satisfaction seems to be dependent upon the level of educational attainment, which to a certain extent also reflects income levels. Figure 5 shows that, at EU level, most of the decrease in life satisfaction between 2018 and 2021 was seen among the more highly educated (-0.3 points), while there was no decrease, on average, in the life satisfaction level of those with less than a secondary education level. In general, people with more education tend to be more satisfied with their lives. Comparing 2021 with 2018, we can see that in the EU Member States where there was an increase, it was predominantly among those with a lower level of education. For those with a middle or higher education level, the subjective evaluation of their life decreased during this period. 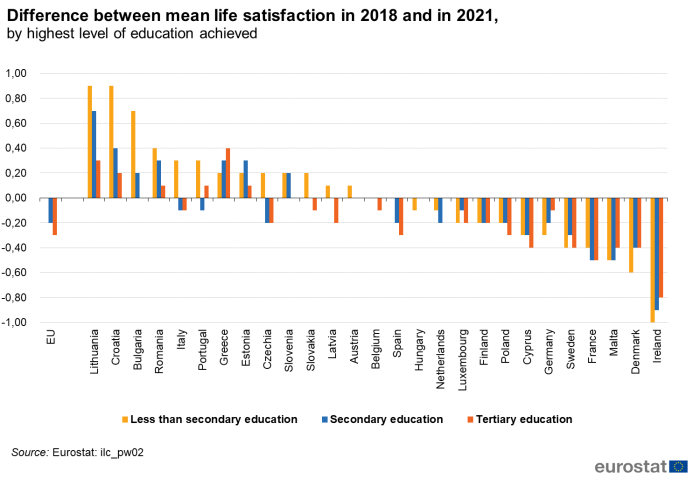 Figure 5: Difference between mean life satisfaction in 2018 and in 2021, by highest level of education achieved
Source: Eurostat (ilc_pw01) and (ilc_pw01)

Figure 6 shows that life satisfaction at EU level depends to an extent on household type, almost not at all on degree of urbanisation (due to opposing trends in the Member States) and a lot on level of income.

Very little difference was found in the life satisfaction of people by degree of urbanisation, notably between big cities, towns and suburbs and rural areas. This, however, may conceal opposing trends in the EU Member States, as in the Nordic EU countries, those living in the rural areas are more satisfied, while for example in Romania and Bulgaria those living in the cities are significantly more satisfied (this may be linked to the financial situation and the location where wealthier people choose to live). The change between 2018 and 2021 was not uniform, it decreased slightly less in towns and suburbs (-0.1 points) than in cities or rural areas (-0.2 point). 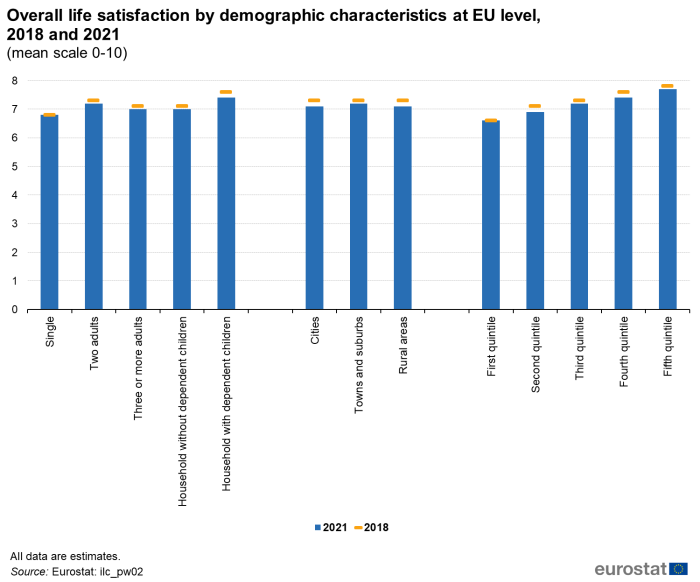 EU citizens tend to be quite satisfied with their life in general, reporting an average of 7.2 points out of 10.0, and in all but one country, the average level was over 6 (i.e., satisfactory and above). There are, however, clear regional patterns: people in the northern, as well as western parts of the EU, tend to be more satisfied with their lives than people in the Baltic countries, the Mediterranean area and eastern parts of the EU. However, a convergence in life satisfaction can be noted in the period between 2018 and 2021. Slight increases of life satisfaction took place in countries with generally lower life satisfaction and the opposite in those countries with higher life satisfaction.

Other demographic and socio-economic factors such as age, educational attainment, household type and degree of urbanisation also play a significant role in subjective well-being. Educational attainment has a positive influence on life satisfaction, as does being in a couple and having children. There is also a notable age-related pattern. Life satisfaction seems to decrease with age in the European Union, except in some of the countries reporting the highest overall life satisfaction: such as Finland, the Netherlands, Belgium, Sweden, Luxembourg, Denmark and Ireland where those aged 65 years and over are at least as satisfied as the general population.

Regarding the overall changes in average subjective well-being between 2018 and 2021, the data shows larger decreases for people with higher levels of education and medium to high income levels as well as for the younger population (aged 16-29 years) when compared with the total surveyed population. The decreases were uniform among men and women.

Subjective well-being encompasses three distinct but complementary subdimensions: life satisfaction (or evaluation), i.e., a person's cognitive overall assessment of their life; affects (the presence of positive feelings, such as joy and the absence of negative feelings, such as sadness or anger); and eudaimonia (the feeling that one's life has a meaning), as specified in the OECD Guidelines on Measuring Subjective Well-being. All three subdimensions were collected in the EU-SILC 2013 ad hoc module on subjective well-being and the data collection was partly repeated in the 2018 ad hoc module on Material deprivation, wellbeing and housing difficulties. The variable 'life satisfaction' is collected yearly in EU-SILC starting with 2021, while the frequency of 'being happy' will be collected every 6 years starting with 2022. The variable 'sense of purpose in life' has been discontinued.

Life satisfaction involves a cognitive and evaluative reflection on past and present experiences. It provides a more stable perspective. However, this lifetime encompassing perspective also presents difficulties for the statistical measurement of life satisfaction: making an unbiased overall evaluation of one's life requires a survey respondent to make a conscious effort and the results may depend on the timing and circumstances of the survey. For example, the assessment could be influenced by fleeting experiences such as the time of day, day of the week, or even weather conditions, but these influences should cancel out in a large sample. An additional methodological difficulty stems from the entirely subjective nature of this metric. In other aspects of quality of life, which focus on functional capabilities, assessments based on perceptions can often be compared with and cross-checked against objective measures. There is, however, no such objectively measurable counterpart for life satisfaction. Nonetheless, this is a measure easy to comprehend and communicate.