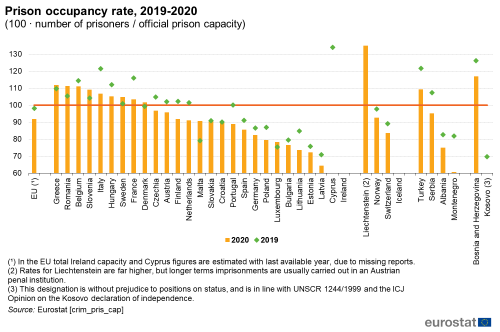 The occupancy rate for a prison is the number of prisoners relative to the official capacity (design capacity) of that prison[1], multiplied by 100. Overcrowding can be formally defined as any occupancy rate exceeding 100. However, practical adaptations in the prison can make the safe operational capacity higher than the official capacity. On the one hand, a minor or temporary excess does not necessarily indicate an overcrowding problem. On the other hand, measuring overcrowding in a country with several different prisons may hide local overcrowding.

Typically, the numbers of prisoners vary more than capacity numbers. Prison capacity cannot be changed rapidly, since it takes time to plan and construct secure buildings. Official prison capacity changes when, for instance, a new prison building is finished, adaptations are made to an existing prison, or a prison is decommissioned. Prisoner numbers depend on other factors, such as conviction rates, lengths of sentences, amnesties and pardons. 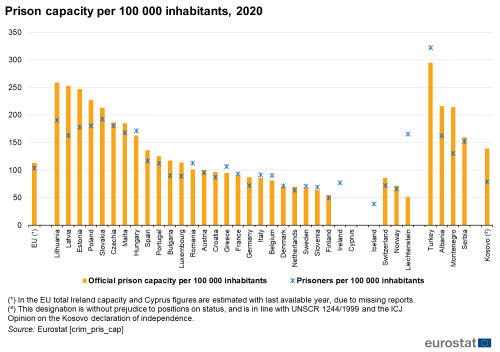 1.9 prisoners per prison personnel in the EU 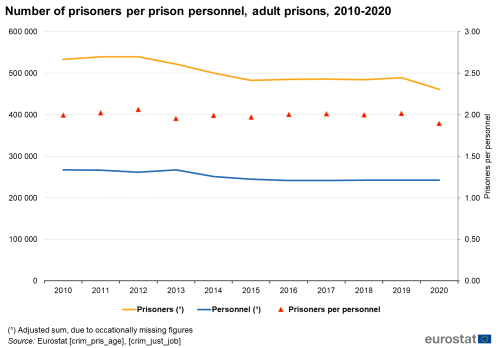 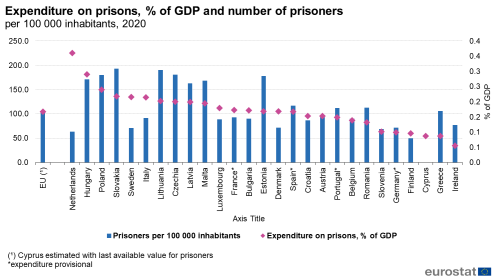 Data sources for prison statistics are national authorities such as prison administration or the national statistical institute. Eurostat collects prison data together with the yearly UN global crime statistics. All results presented in this article are based on official figures.

Missing data is a major problem for some types of crime statistics at European level. In this article, some EU totals are presented that are not found in the Eurostat database. For example, if a 2020 figure was missing, the figure for the last available year (from the same country) was included in the total instead. At the same time, similar adjustments are made for more years. This is not to be considered official EU totals, but may serve to indicate an overall trend. The national figures are presented in the web database as reported (no adjustments).

In general, each country is responsible for its own criminal laws, criminal justice policies, as well as specifications for relevant statistics. Typically, official statistics on crime and criminal justice are made for administrative purposes and used by national authorities.

The number of prisoners (counted at the end of a year) depends on:

The trend in prisoner number depends on:

Links to worldwide statistics on prisons and prisoners: