There was one prisoner for every 895 people in the EU in 2019, or 112 prisoners per 100 000 people. The value (prisoner rate) is constant compared to the previous year, at its lowest level since the turn of the century. 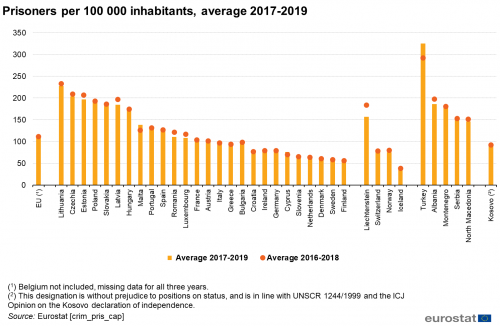 Trends in number of prisoners 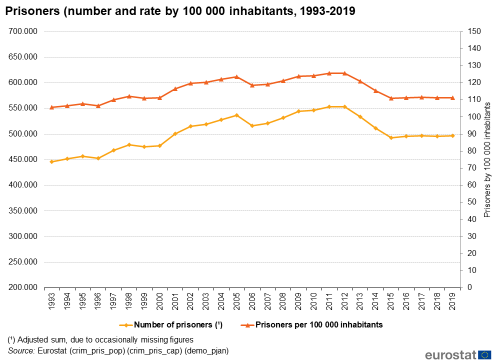 1 out of 20 adult prisoners are women 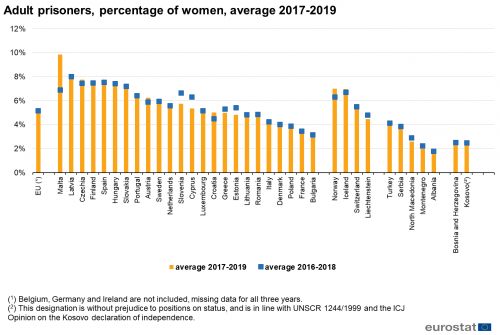 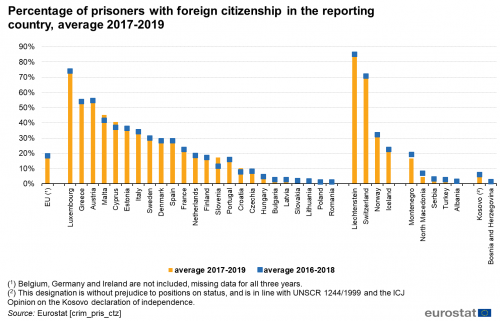 Two prisoners per prison employee in the EU 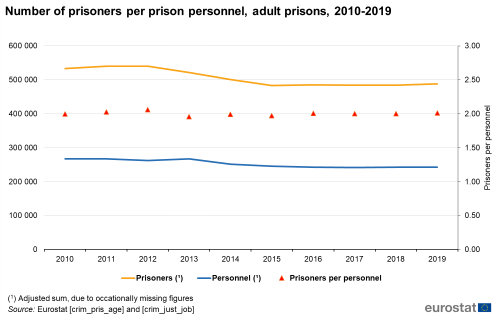 The number of prisoners per prison personnel varies between EU Member States (see Figure 7). The highest 2017-2019 average figures were observed in Poland (4.4), Bulgaria (2.5), Portugal and Greece (both 2.4), Spain and Lituania (each 2.3). The lowest figures were in Sweden (1.0), the Netherlands (1.1), Denmark (1.2), Croatia (1.3), Finland and Luxembourg (both 1.4). Data are steady compared to the average of the previous three years. For Belgium, Germany, Ireland, France and Cyprus data are missing for all three years. 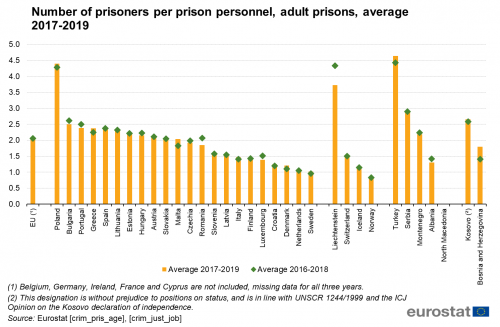 The occupancy rate for a prison is the number of prisoners relative to the official capacity (design capacity) of that prison[3], multiplied by 100. Overcrowding can be formally defined as any occupancy rate exceeding 100. However, practical adaptations in the prison can make the safe operational capacity higher than the official capacity. On the one hand, a minor or temporary excess does not necessarily indicate an overcrowding problem. On the other hand, measuring overcrowding in a country with several different prisons may hide local overcrowding.

The highest overcrowding rates [4] were observed in Hungary, Italy and Cyprus (each 119), France (116) and Romania (109), the lowest in Malta, Estonia and Bulgaria (each 81), Croatia (82) and Lithuania (83). For Belgium and Ireland data are missing for all three years. As shown in Figure 8, fourteen countries had some extra capacity, or "empty cells", while eleven countries experienced overcrowded cells. The figures are the 2017-2019 average. 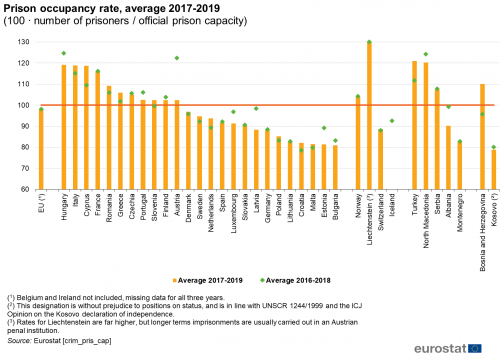 Typically, prisoner numbers vary more than capacity numbers. Prison capacity cannot be changed rapidly, since it takes time to plan and construct secure buildings. Official prison capacity changes when, for instance, a new prison building is finished, adaptations are made to an existing prison, or a prison is decommissioned. Prisoner numbers depend on other factors, such as conviction rates, lengths of sentences, amnesties and pardons.

Figures 9, 10 and 11 illustrate prison occupancy trends, showing six countries that have reported a complete data series from 2008 to 2019.

In Portugal, there was a relatively large increase in the number of prisoners between 2008 and 2015, while the capacity remained much the same. Thus, the prison occupancy went from having some extra capacity to being relatively crowded at national level. In 2016, the number of prisoners started falling. This combined with some increase in capacity, improved the situation and the prison occupancy rate reached the 100 value in 2018 and 2019. 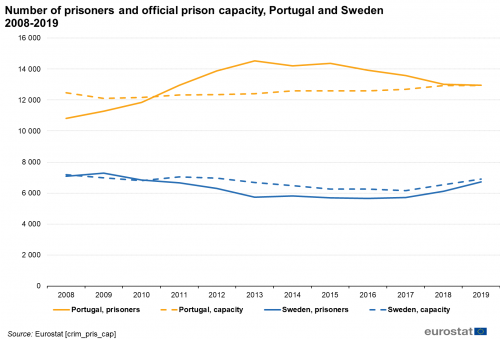 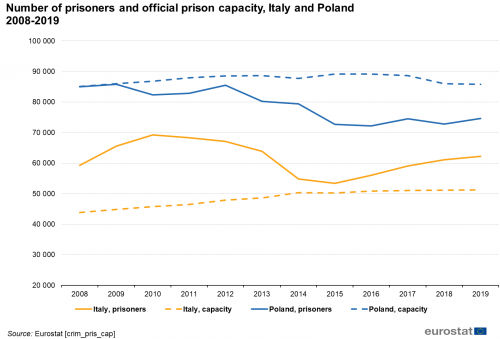 In Romania, in 2014 the number of prisoners decreased sharply and also the prisoner capacity has been reduced. The prison occupancy rate was always slightly higher than 100 in the period. 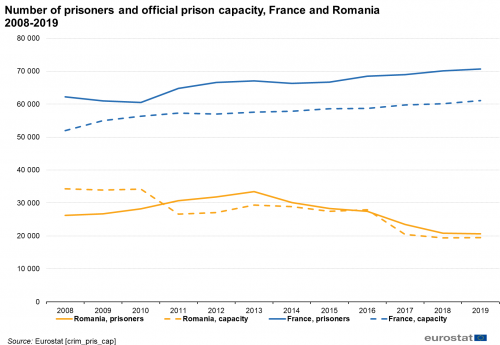 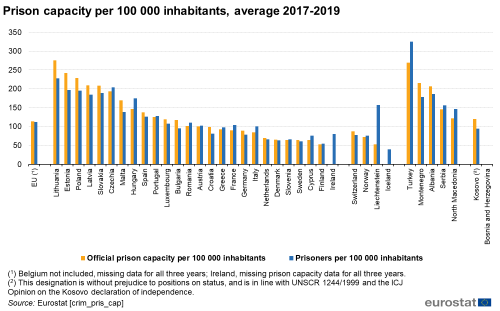 1 out of 5 prisoners are awaiting trial 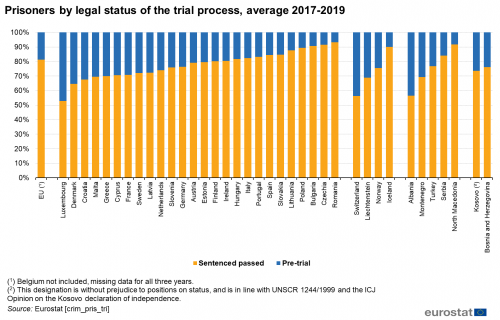 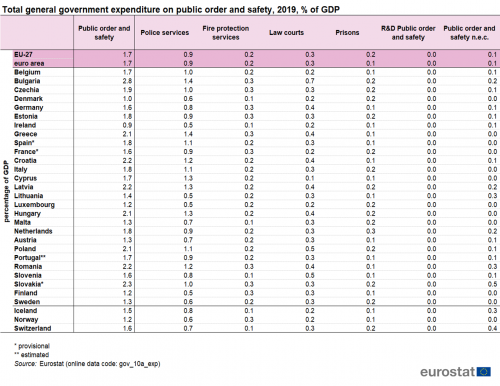 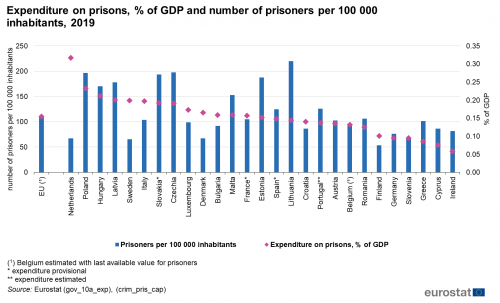 Data sources for prison statistics are national authorities such as prison administration or the central statistical office. Eurostat collects prison data together with the yearly UN global crime statistics. All results presented in this article are based on official figures.

Missing data is a major problem for some types of crime statistics at European level. In this article, some EU totals are presented that are not found in the Eurostat database due to quality considerations. For example, if a 2019 figure was missing, the figure for the last available year (from the same country) was included in the total instead. On occasion, similar adjustments are made for more years. This is not to be considered official EU totals, but may serve to indicate an overall trend. The national figures are presented in the web database as reported (no adjustments). An example may illustrate the reporting. For the EU time series 1993-2019, in all 18 figures were missing for various countries and years, of a total of 27*27=729 figures (2.47 % missing data, 1.17 % missing data in the period 2000-2019).

In general, each country decides criminal laws, criminal justice policies, as well as specifications for relevant statistics. Typically, official statistics on crime and criminal justice are made for administrative purposes and used by national authorities.

The number of prisoners (counted at the end of a year) depends on:

The trend in prisoner number depends on:

Links to worldwide statistics on prisons and prisoners: