General government expenditure in the EU on public order and safety stood at 1.8 % of GDP in 2020. 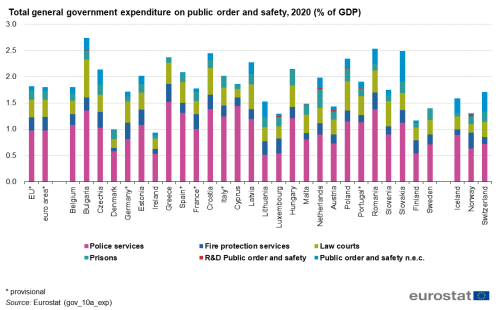 Expenditure on 'public order and safety' 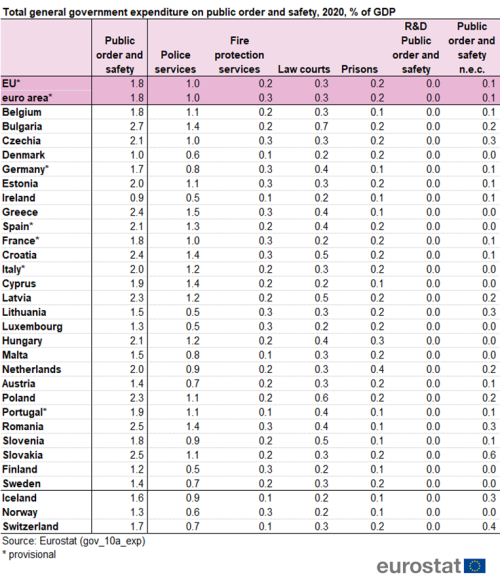 At the level of the EU, general government total expenditure on 'public order and safety' in 2020 stood at 1.8 % of GDP. Within this COFOG division, the equivalent of 1.0 % of GDP was spent on 'police services', as the most significant COFOG group in this division by expenditure. Around 0.3 % of GDP was accounted for by expenditure on 'law courts' and 0.2 % of GDP each on 'fire protection services' (including civil protection operations such as dealing with flooding, mountain rescue, beach surveillance) and 'prisons'.

As a ratio to GDP, Greece (1.5 % of GDP) spent the highest amount on police services followed by Cyprus, Croatia, Romania and Bulgaria (all 1.4 % of GDP). This group comprises also expenditure on the operation of border and coast guards.

Expenditure on 'law courts', which comprises expenditure on the operation of courts and the justice system, in the EU was highest in Bulgaria (0.7 %) and Poland (0.6 %) while for the rest of the reporting countries the ratio ranged between 0.1 % of GDP and 0.5 % of GDP in 2020.

Expenditure on public order and safety by type of transaction

At the level of the EU, by far the largest part of expenditure on 'public order and safety' in 2020 was on 'compensation of employees' (72 %), i.e. wages, salaries and employers' social contributions for staff working in this field, for example, police, judges, firemen and prison guards. 'Intermediate consumption' (including expenditure on outsourcing services) made up about 19 % and capital investments about 6 %.

For 'public order and safety', the groups are

The provision of COFOG level II data has become compulsory with the introduction of ESA 2010.