This article looks at monthly cumulated data on natural gas in the European Union (EU) for 2018 and 2019, as well as trends between these two years. It covers all aspects of the supply side - primary production, imports (entries) and exports (exits), stock changes, gross inland consumption - as well as natural gas energy dependency data by Member State and for the European aggregates EU and euro area. 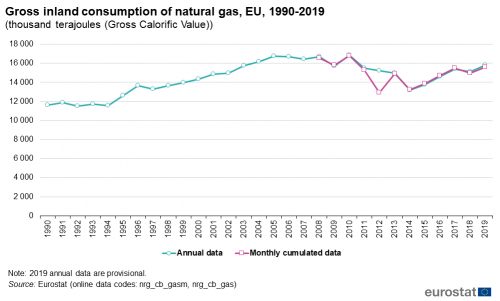 In Table 1 and Table 2 as well as in Figure 6, a negative dependency rate indicates a net exporter country. Positive values over 100 % indicate stocks build-up during the reference period. 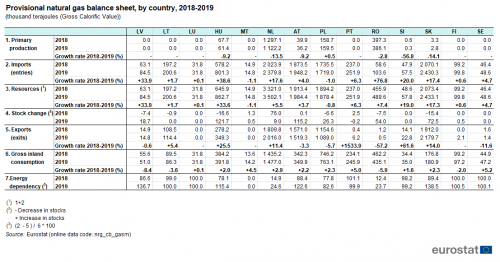 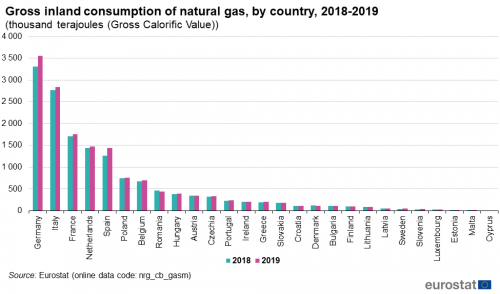 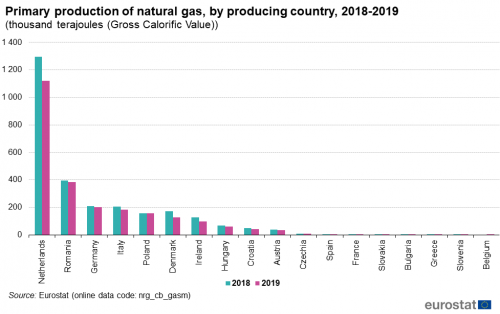 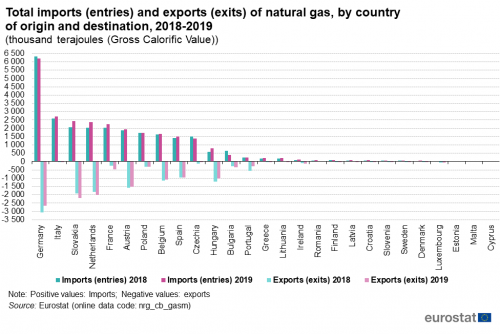 It is important to remember that following the change in methodology in reporting monthly natural gas trade, introduced starting with reference month January 2013, monthly data concerning imports by country of origin are no longer completely comparable with previous years' figures or with the more detailed annually collected data. The new monthly reporting provides import figures as entries from last transit country (mostly neighbouring countries) instead of by country of primary / indigenous production and export figures as exits from the reporting country (thus including all gas transiting its national territory).

As regards the origin of imports, Norway was the source of 24.0 % of the natural gas entering the EU (intra-EU trade and entries from Switzerland both excluded), followed by Ukraine (19.0 %), Russia (19.0 %) and Belarus (9.9 %) (see Figure 5). However, considering that most gas entering the EU from Ukraine and Belarus initially comes from Russia, the dependency on gas imports from this country is in practice higher than on gas from Norway. 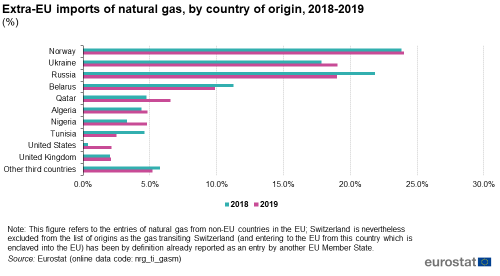 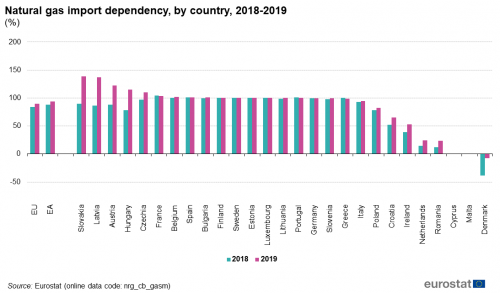 All data used in this article correspond to cumulative monthly figures and may differ from the annual data (except for Figure 1, where both are used, mainly to illustrate the level of accuracy of the monthly data compared to the annual data).

Timely data are essential to all stakeholders for an efficient monitoring of the market evolutions, especially in the energy domain. Therefore, Eurostat not only collects detailed annual statistics but also complements them with a reduced number of data points which are collected on a monthly basis and published within two to three months after the reference month. In this framework, the natural gas monthly data covers the supply – and to a limited extent consumption – of this fuel, providing thus very early information about the developments in the natural gas market both in the EU as in each Member State.