This article looks at the various types of analysis and evaluation for which national accounts can be used by European Union (EU) institutions, governments, central banks as well as other economic and social bodies in the public and private sectors, all needing a set of comparable and reliable statistics on which to base their decisions.

For instance, an analysis of the structure of the economy can be used to show the level or share of value added and employment in each industry sector, or the final consumption expenditure dedicated to different product groups.

Analysis may focus on specific parts or aspects of an economy – for example, banking and finance, or the role of government. National accounts may also be analysed over time to show changes in an economy, for example, the development of gross domestic product (GDP), or a comparison of the structure of two economies.

The use of internationally accepted concepts and definitions also permits an analysis of different economies, such as the interdependencies between the economies of the European Union, or a comparison between the EU and non-member countries.

This article portrays some of the main uses and users of national accounts data.

Among the European institutions, national accounts are used in a wide range of areas, including support of monetary policy decision-making, economic research, policy analysis, macro-economic forecasting and fiscal surveillance.

Since the beginning of the EMU in 1999, the European Central Bank (ECB) has been one of the main users of national accounts. The primary objective of the ECB and its single monetary policy is the maintenance of price stability in the euro area, and in this respect the key indicator is inflation, measured through the harmonised index of consumer prices (HICP).

The ECB’s strategy for assessing the risks to price stability is based on two analytical perspectives, referred to as the ‘two pillars’: economic analysis and monetary analysis. A large number of monetary and financial indicators are thus evaluated in relation to other relevant data that allow the combination of monetary, financial and economic analysis, for example, key national accounts aggregates and sector accounts. In this way monetary and financial indicators can be analysed within the context of the rest of the economy.

The ECB and Eurostat have joined forces to produce European sector accounts on an annual and quarterly basis, which link financial and non-financial statistics and include consistent financial balance sheets. They provide a large range of indicators on the development of the economic situation in various institutional sectors, for example regarding income, expenditure, investment and outstanding debt for households, or the level of investment and debt of non-financial corporations.

The European Commission is another main user of national accounts across a wide range of areas. Its services regularly use these data for designing and assessing their policies.

The Directorate-General for Economic and Financial Affairs (DG ECFIN) develops research tools and analyses data to guide and support policy-making in the European Commission in general. One focus of research is the functioning of economic and monetary union, but analyses cover a broad range of issues, ranging e.g. from financial stability analysis or an assessment of economic convergence in the context of enlargement, to how structural reforms contribute to macroeconomic performance or the economic implications of ageing populations.

DG ECFIN also produces the European Commission’s macro-economic forecasts twice a year, in the spring and autumn. These forecasts cover all EU Member States in order to derive forecasts for the euro area and the EU-27, but they also include outlooks for candidate countries, as well as some non-member countries.

Fiscal policy and the Stability and growth pact (SGP)

The analysis of public finances through national accounts is another well established use of these statistics. Within the EU a specific application was developed in relation to the convergence criteria for economic and monetary union (EMU), two of which refer directly to public finances. These criteria have been defined in terms of national accounts figures, namely, government deficit and government debt relative to GDP.

The Treaty on European Union (Maastricht Treaty) established limits for government deficits and debt. Under the provisions of the Stability and growth pact (SGP) the Member States have to submit annual stability (convergence) programmes, showing how they intend to achieve or safeguard sound fiscal positions in the medium term, taking into account the impending budgetary impact of population aging and other factors.

The European Commission assesses these programmes and the Council gives its opinion on them. The SGP also governs the excessive deficit procedure (EDP): the EDP is triggered when the deficit breaches the 3 % GDP threshold of the Treaty. If it is decided that the deficit is excessive in the meaning of the Treaty, the Council issues recommendations to the Member States concerned to correct their excessive deficits and gives a timeframe for doing so.


Non-compliance with the recommendations triggers further steps in the procedures, including the possibility of sanctions for euro area Member States. However, it should be noted that these two criteria relating to public finances do not synthesise all the information about public finances, and a much broader range of indicators (than these two headline figures) is considered useful for monitoring purposes – for example, the composition of revenue raising activities and the purposes for which government expenditure is made.

As well as business cycle and macroeconomic policy analysis, there are other policy-related uses of ESA data, notably concerning regional, structural and sectoral issues.

The allocation of expenditure for the Structural funds is partly based on regional accounts. Furthermore, regional statistics are used for ex-post assessment of the results of regional and cohesion policy.

The EU’s regional policy aims to strengthen economic, social and territorial cohesion by reducing differences in the level of development among regions and Member States. For the period 2007-2013 a budget of EUR 347 410 million is foreseen , equivalent to more than one third of the whole EU budget. The main concerns of the policy for 2007 to 2013 are:

Convergence regions are NUTS level 2 regions whose GDP per inhabitant (measured in purchasing power standards and on the basis of a three-year average) is less than 75 % of the EU-25 average; in other words, the poorest regions and Member States. These 84 regions (based on regions according to the 2003 version of the NUTS classification) have a total population of 154 million inhabitants.

Several instruments are used to implement regional policy, notably the European Regional Development Fund (ERDF) and the Cohesion Fund. The ERDF operates in all Member States but is concentrated on the poorest regions and co-finances investments and training.

The Cohesion Fund mainly co-finances transport networks and environment projects. Member States whose gross national income (GNI) per inhabitant is less than 90 % of the EU average are eligible: for the period 2007-2013 the Cohesion Fund concerns the Member States that joined the EU in 2004 and 2007, as well as Greece and Portugal; Spain is eligible to a phase-out fund.

The effects of these policies and reforms may spread across the EU as a result of the economic links between Member States. To ensure that this is as beneficial as possible, and to prepare for the challenges that lie ahead, the European Commission rigorously analyses all these policies.

The European Commission conducts economic analysis contributing to the evolution of the Common agricultural policy (CAP) by analysing the efficiency of its various support mechanisms and developing a long-term perspective. This includes research, analysis and impact assessments on topics related to agriculture and the rural economy in the EU and non-member countries, in part using the economic accounts for agriculture (satellite accounts). </sesection>

Policies within the EU are increasingly setting medium or long-term targets, whether binding or not. For some of these, the level of GDP is used as a benchmark denominator, for example, setting a target for expenditure on research and development at a level of 3 % of GDP.

Another example concerns official development assistance (ODA), which consists of grants or loans that are undertaken by the official sector with promotion of economic development and welfare in the recipient countries as the main objective.

The EU agreed to increase its ODA as a step towards the 0.7 % target set by the United Nations. In 2005 the EU made additional commitments to collectively reach official development assistance of 0.56 % of GNI by 2010, underpinned by an individual target of 0.17 % for the 12 newest Member States and 0.51 % for the others, with those Member States that have already reached their targets keeping higher aid levels. 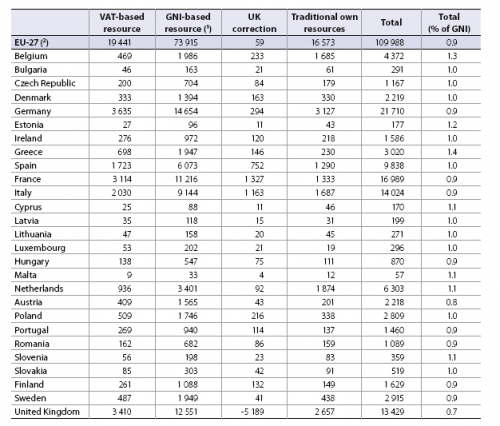 Table 1: National contribution by Member States and traditional own resouces collected on behalf of the EU, 2007 (EUR, million)

Own resources can be divided into the following categories:

National accounts also assist in the calculation of the correction applied for the United Kingdom’s contribution. The financing of the reimbursement by the other Member States is calculated on the basis of each country’s share in the EU’s total gross national income, with upper thresholds applied for some Member States.

National accounts are also widely used by analysts and researchers to examine the economic situation and developments.


Among other uses, researchers and analysts use national accounts for business cycle analysis and analysing long-term economic cycles and relating these to economic, political or technological developments.