The volume index of GDP per capita in Purchasing Power Standards (PPS) is intended for cross-country comparisons rather than for temporal comparisons. GDP per capita when expressed in PPS eliminates the differences in price levels between countries allowing meaningful volume comparisons of GDP between countries. Expressed in relation to the European Union (EU27 = 100), a country with an index that is higher than 100 mean that this country's level of GDP per head is higher than the EU average. 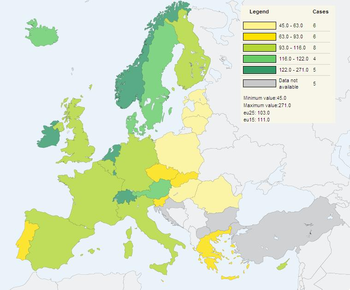