The sector accounts are the part of the national accounts that records the economic flows and stocks of the institutional agents classified in “sectors” according to their economic behaviour and function in the economy.

They are necessary to answer questions such as: are households spending or saving a bigger share of their income? Are corporations investing more or do they prefer to retain their earnings? Is the economy financing its investments through its total savings or is it borrowing from abroad?

With the start of the euro area, it was felt necessary to supplement national sector accounts as provided by the Member States with genuine European sector accounts that would reflect the economic situation of the euro area / European Union as a whole. In order to “consolidate” the accounts of the Member States across borders, Eurostat and the European Central Bank worked out a special methodology, in close cooperation with the national statistical institutes and national central banks.

The European sector accounts aim to provide a comprehensive and comparable overview of the European economy as a whole. They record all “transactions” between economic agents grouped by “sector”. The system forms a sequence of interlinked accounts.

The sector accounts thus show the interactions between the different sectors of a given economy, and between them and the rest of the world.

Transactions are classified according to their economic nature (e.g. payment and receipt of wages or taxes, consumption, granting of a loan, etc.).

They belong to two main categories: transactions in goods and services and distributive transactions.

Transactions in goods and services

For goods and services as a whole, total supply should equal total use, which leads to the following equation:

Where GDP stands for gross domestic product and measures the value of goods and services produced during the period considered.

Distributive transactions consist of economic flows that involve the (re-)distribution of income created by the production of goods and services.

For each distributive transaction, the amounts that are paid by a sector are recorded as “uses” whereas the amounts received are recorded as “resources”. For instance, the “uses” side of the transaction category “compensation of employees” records the amounts of wages and salaries and social contributions payable by all the country’s employers, namely non-financial corporations, financial corporations, government and households (as individual entrepreneurs), and employers residing abroad (rest of the world sector).

The resources side shows the compensation of employees receivable by the relevant sectors of the economy, namely:

As shown in Table 1, for each type of distributive transaction, total resources of all sectors and the rest of the world accounts equal total use. On the use side, two thirds of the total amount of compensation of employees is paid by non-financial corporations. The other third is paid either by general government, households (as individual entrepreneurs), financial corporations or non-residents (rest of the world sector). On the resources side, almost all compensation of employees is received by resident households.

Transactions are grouped into a sequence of accounts covering a specific aspect of the economic process, ranging from production, generation and (re)distribution of income through consumption and investment to borrowing and lending. Each account is closed by a balancing item defined as total resources minus total use, and this is carried over to the next account.

Some balancing items are of great analytical interest, for example gross operating surplus, disposable income and saving. The final balancing item of the non-financial sector accounts is net lending/borrowing, which is equal to all flows received minus all flows paid by each institutional sector. It then reflects whether a given sector has increased/decreased its financial wealth through economic activities carried out during the period considered.

The euro area/European Union accounts are based on, but are not the simple sum of, the national accounts of the Member States. First, the accounts of European institutions and bodies need to be added. Second, cross-border transactions between European countries have to be eliminated from the rest of the world accounts. Third, imbalances which are mainly caused by the removal of intra-flows, called “asymmetries”, are eliminated in order to re-balance the accounts.

In the diagram below, these transformations are presented using a simple example, assuming that Europe is made up of two countries, A and B. All economic flows are displayed with arrows. 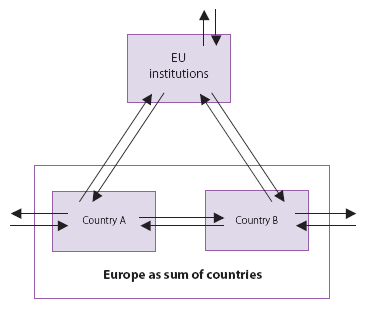 In this second diagram, the European Union is considered as a single entity. Only flows vis-à-vis third countries are taken into account. The EU institutions are included in the European aggregate. 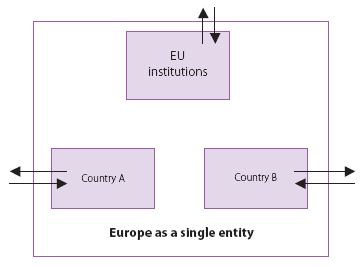 Since 2006, European sector accounts at current prices have been compiled according to the single-entity principle. The other European aggregates, in particular volume data, are still compiled using the first approach.

The main steps in the compilation of European sector accounts are detailed below.

For the general government sector, the EUI are the following:

Significant transactions, especially transfers, take place between the above institutions and Member States. This is particularly the case for the Commission, which administers European policies that involve financial transfers.

The rest of the world in the European accounts

The rest of the world accounts, as compiled by the Member States, record transactions between the national economies and all non-resident units, including those in other European Member States. For instance, imports/exports recorded in Member States’ national accounts include the goods and services bought from or sold abroad, whether from or to a resident of the euro area, of the European Union or of a third country.

To reflect appropriately the transactions between European areas and third countries, it is therefore necessary to remove, from the sum of national rest of the world sectors, the economic flows within the area considered (“intra-European flows”).

There is insufficient data on the rest of the world sector breakdown into intra/extra euro area/European Union in the national accounts data sets. Consequently, the European accounts draw on both the national and the European balance of payments statistics. In other words, the “intra flows” are estimated using the geographical breakdown provided by balance of payments (BoP) data.

Note that, because of different data revision policies and conceptual differences, it is not possible to ensure full consistency between the European rest of the world sector and BoP statistics at this stage.

Moreover, for “intra flows”, total resources should theoretically equal total uses. For instance, within the euro area, total “intra”-imports should equal total “intra”-exports. However, this is not the case in practice. The comparison of total intraflows in resources and uses reveals imbalances called “asymmetries”.

As a consequence, European accounts cannot be derived by simply removing the intra-flows of each transaction. The resulting discrepancies have to be allocated to the various resident sectors in order to re-balance the European accounts. Table 2 illustrates the removal of the “intra” European flows using interest flows as an example.

As illustrated in the example above, removing the intra-flows from the European Rest of the World accounts creates imbalances between total resources and total uses when conceptually they should be equal.

In the case of transactions in goods and services, these imbalances are created by the difference between intra-imports and intra-exports called “asymmetries”.

To allocate asymmetries in goods, intra-community trade statistics collected under the Intrastat regulation[1] are used. These data provide a breakdown of intra-flows of goods by final use categories. These proportions are used to allocate asymmetries in goods to the intermediate consumption and gross fixed capital formation (“investment”) of households and non-financial corporations.

Asymmetries in services are allocated to the intermediate consumption of non-financial corporations and to the final consumption of households on a pro rata basis. This balancing process has an impact on goods and services transactions, and therefore on the level of the Gross Domestic Product of the areas concerned. As illustrated in Figure 1, the GDP of the European Union is about 0.2% lower after balancing. In the euro area case, balancing caused a decrease of about 0.3% in the beginning of the period (1999 and 2000) whereas the impact decreased significantly in the recent years (-0.04 % in 2006). 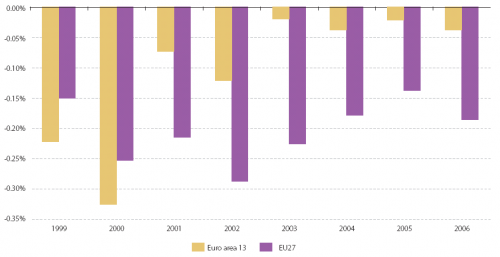 Figure 1: Adjustment of GDP due to the balancing process (in percentage points)

For distributive transactions as well, the removal of “intra” European flows creates imbalances as illustrated in Table 2 in the case of interest.

In order to balance distributive transactions, the method consists of identifying the items to which the discrepancies should be allocated.

In practice, the following rules are applied:

For compensation of employees, the discrepancy is totally allocated to the amounts received by the households sector. Indeed, in most Member States, this item is indirectly estimated as the sum of the compensation of employees paid by all other sectors. It is also the most important item for this transaction so that the impact of balancing is minimised.

The same kind of reasoning is applied to other transactions which are more or less directly related to salaries, i.e. social contributions, social benefits and the adjustment for the change in net equity of households in pension funds reserves.

In the case of interest, imbalances (total resources minus total use) are allocated on a pro rata basis as illustrated in Table 3 (follow-up of Table 2). 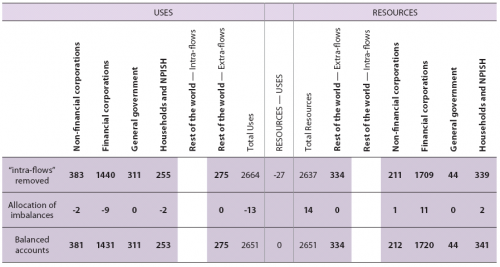 As was shown in Table 2, removing intra-European flows creates an imbalance of EUR -27 billion between total interest received and total interest paid. This imbalance between resources and use of interest has been distributed among the resident sectors except general government as shown in Table 3. For example, the amounts recorded for the interest received by financial corporations were EUR 1709 billion before adjustment and EUR 1720 billion afterwards.

The same method is used for the other transactions related to property income and other current transfers, as there is no obvious single absorbing item. Consequently, imbalances are allocated to the domestic sectors (other than government) on a pro-rata basis.

For the transactions “net non-life insurance premiums” and “current taxes on income and wealth”, the discrepancy is proportionally allocated among the domestic sectors (other than government) on the use side. For the transaction “nonlife insurance claims”, it is the opposite: the discrepancy is allocated among the non-government domestic sectors on the resources side.

For capital taxes, the most important taxpayer, namely the households sector, was chosen to absorb the discrepancy. As regards the other capital transfers, the imbalance was allocated between the amount received by non-financial corporations and households.

With the start of the euro area and the successive enlargements of the European Union, new user needs have emerged for genuine European accounts.

In order to compile such accounts, it was necessary to include European institutions and consolidate cross-border flows within the areas considered. The removal of intra-flows has led to discrepancies between resources and uses that have been resolved by balancing the accounts, thus impacting on aggregates like the European GDP at current prices.

The result of the whole compilation process, from the individual country data to the final balancing procedure, gives a balanced and consistent set of sector accounts for the euro area and the European Union.

The European sector accounts are no longer the sum of national accounts transmitted by the Member States. They are also different from other euro area/European Union national accounts publications, in which cross-border flows within the area concerned have not yet been removed.