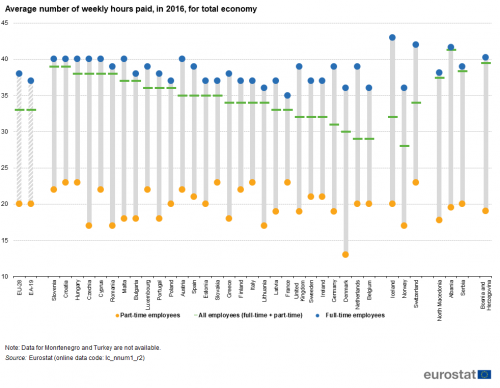 This article is based on the latest vintage of the 4-yearly Labour cost survey (LCS), with reference year 2016. The changes between 2008 and 2016 are highlighted in another article available here: Labour cost structural statistics - changes.

The highest number of average weekly hours paid to all employees, be they working on a full-time or a part-time basis, in the EU was observed in Croatia (38.9 hours) followed by Slovenia (38.8 hours). The lowest numbers were recorded in the Netherlands (28.7 hours) and Belgium (28.9 hours). Those figures result from the combined effect of (1) the average number of hours paid to full-timers (2) to part-timers and (3) the proportion of part-time employees in the mentioned economies. 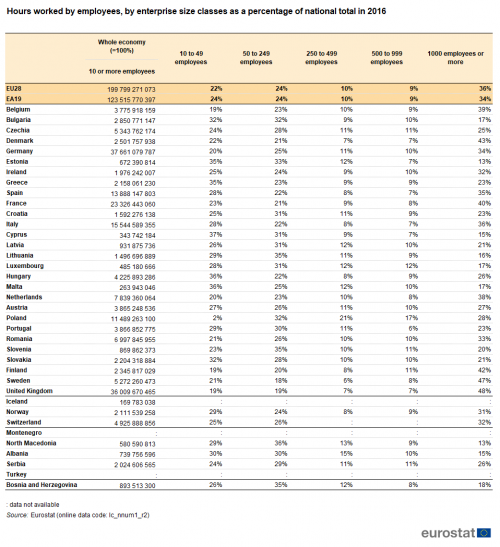 Table 1: Hours worked by employees, by enterprise size classes as a percentage of national total in 2016

The highest shares of hours worked in large enterprises (i.e. with more than 1000 employees) were observed in the United Kingdom (48 %) and Sweden (47 %). Denmark (43 %), Finland (42 %) and France (40 %) also showed high shares followed by Belgium (39 %) and the Netherlands (38 %). At the other extreme, the lowest shares of hours worked in large enterprises were recorded in Estonia (13 %), Cyprus (15 %), Lithuania (16 %) followed by Bulgaria, Luxembourg and Malta (all 17 %). It should be noted that size classes are measured at national level and do not take into account, for enterprise groups, the employees working in foreign affiliates.

As regards small businesses, with 10 to 49 employees, the highest shares of hours worked were recorded in Cyprus (37 %) followed by Hungary and Malta (both 36 %) then Estonia and Greece (both 35 %). By contrast, they had a very low share in Poland (2 %).

As regards the service sector, the highest shares were recorded in Cyprus (66 % against 48 % for the EU) followed by Luxembourg (63 %).

Luxembourg was characterised by a high share of hours worked in enterprises in the construction sector (13 % against 5 % for the EU) and a low share in the mainly non-business economy (12 % against 24 % for the EU).

As regards the latter sector, the mainly non-business economy, which mainly covers education and health, the highest proportions were recorded in Sweden (38 %) and Denmark (34 %) and the lowest, besides Luxembourg, in Cyprus and Austria (both 16 %). 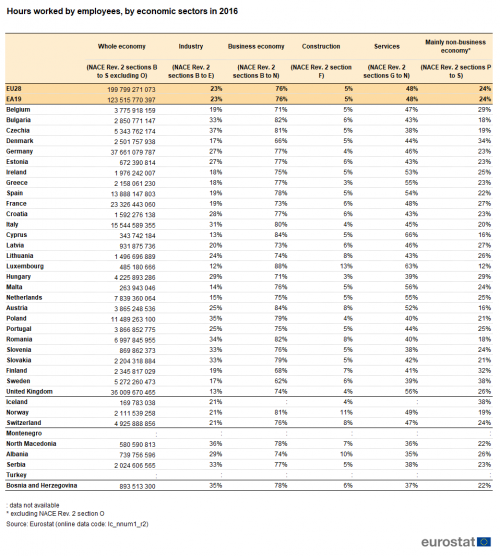 Table 2: Hours worked by employees, by economic sectors in 2016 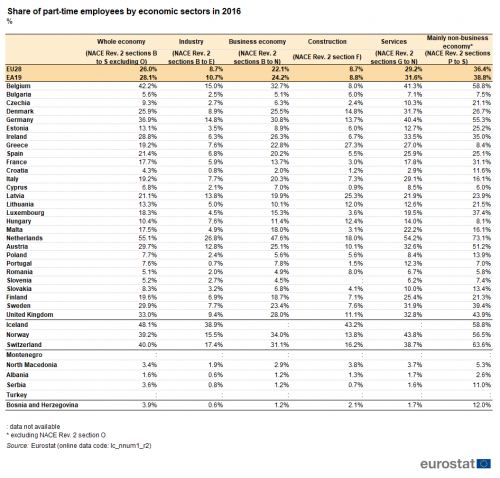 Table 3: Share of part-time employees by economic sectors in 2016, %

Wages and salaries, including social contributions payable by employees, represent the largest share (76.3 % for the EU as a whole) of total labour costs, followed by social contributions paid by employers (22.3 %). The remainder (1.4 %) is absorbed by vocation training costs, other expenditure and taxes less subsidies received on labour (Figure 2). 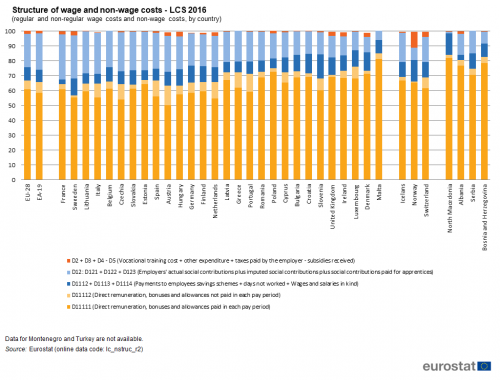 In 2016, the highest hourly labour costs among EU Member States, expressed in euros, were recorded in Denmark (EUR 42.1), followed by Luxembourg (EUR 39.0), Belgium (EUR 38.6) and Sweden (EUR 37.7). The lowest levels were recorded in Bulgaria (EUR 4.5) and Romania (EUR 5.4) (Figure 3, blue bars). The highest levels, recorded for Denmark, are 9.5 times higher than the lowest, recorded for Bulgaria. 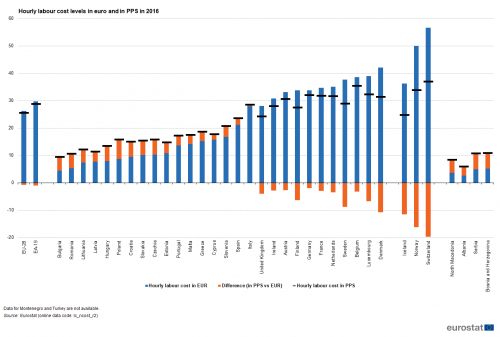 Figure 3: Hourly labour cost levels in euro and in PPS in 2016

Disparities are considerably smaller when hourly labour costs are expressed in purchasing power standard (PPS), a measure which accounts for price differentials across countries (Figure 3, black dashes). In PPS, hourly labour costs range from 9.34 in Bulgaria to 35.36 in Belgium i.e. 3.8 times more.

The Labour cost survey (LCS) provides details on the level and structure of labour cost data, hours worked and hours paid for employees in the European Union (EU).

Employees include all persons employed at the observation unit and with an employment contract (permanent or not), except family workers; home workers; occasional workers; persons wholly remunerated by way of fees or commission; board of Director Members; directors/managers paid by way of profit share or by fee; self-employed persons. Data do not cover apprentices except in the case of Bulgaria, Latvia, Croatia, Slovenia and Serbia where they represent a low share of the total labour force (less than 1 %).

If not otherwise stated, data refer to full-time and part-time employees working in enterprises employing 10 employees or more, in all economic sectors except: agriculture, forestry and fishing (NACE Rev. 2 Section A) and public administration and defence; compulsory social security (NACE Rev. 2 Section O). The transmission of LCS data for NACE section O is voluntary.

Hours worked are defined as the periods of time employees spent on direct and ancillary activities to produce goods and services, including normal periods of work, paid and unpaid overtime and time spent on preparation, maintaining, repairing, cleaning and writing reports associated to main work. They exclude periods of vacation and other public holidays, sick leave and other type of absence which employees are paid for. The average hours paid per calendar week are calculated as the total number of hours paid by a full time employee during the year divided by the decimal number of all weeks in that year (i.e. 52.29) including vacation/holidays and other periods (e.g. sick leave) where the employee is not available for producing goods and services. This number should not be confused with the standard number of hours worked during a working week.

Labour costs refer to the total expenditure borne by employers in order to employ staff. They cover wage and non-wage costs less subsidies. They do include vocational training costs or other expenditures such as recruitment costs, spending on working clothes, etc.