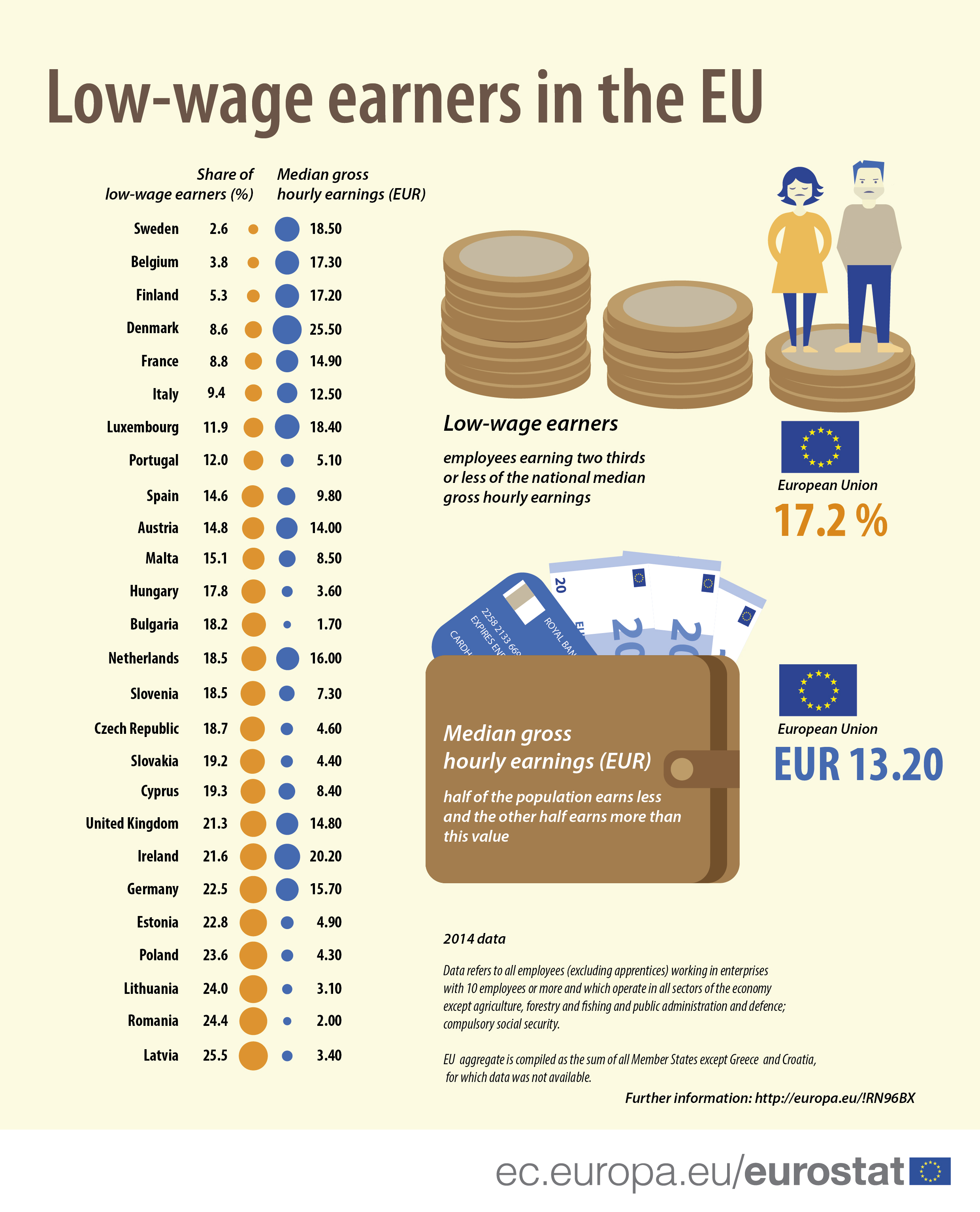 This article analyses the results of the four-yearly structure of earnings survey (SES) that provides comparable in-depth information at European Union (EU) level on the link between the level of earnings and the individual characteristics of employees (sex, age, occupation, educational level) and their employer (economic activity, size of the enterprise, etc.).

The SES is a large enterprise survey providing detailed information on the structure and distribution of earnings in the EU. The SES is important in compiling other structural indicators such as the gender pay gap, the low-wage trap or the unemployment trap.

The figures below, based on the latest vintage of the SES, relate to October 2014. Data on low-wage earners as well as corresponding median gross hourly earnings refer to all employees (excluding apprentices) working in enterprises with 10 employees or more and which operate in all sectors of the economy except agriculture, forestry and fishing (NACE Rev. 2 section A) and public administration and defence; compulsory social security (NACE Rev. 2 section O). Gross hourly earnings refer to the wages and salaries earned by full-time and part-time employees, per hour paid, in the reference month (generally October 2014) before any tax and social security contributions are deducted. Wages and salaries include any overtime pay, shift premiums, allowances, bonuses, commission, etc.

EU and EA aggregates are compiled as the sum of all Member States except Greece (EL) and Croatia (HR) for which data were not available at the time of drafting this article.

Across Member States, the highest national median gross hourly earning in October 2014 was 5 times higher than the lowest when expressed in purchasing power standards (PPS), which eliminates price level differences between countries. As measured in October 2014, the highest median gross hourly earnings in PPS were recorded in Denmark (18.5 PPS) and Ireland (18.4 PPS), ahead of Belgium (15.4 PPS), Germany and Luxembourg (both 15.0 PPS), the Netherlands and Sweden (both 14.5 PPS). At the opposite end of the scale, the lowest median gross hourly earnings in PPS were registered in Bulgaria (3.6 PPS) and Romania (4.0 PPS), followed by Latvia (5.0 PPS) and Lithuania (5.1 PPS) (Figure 1). 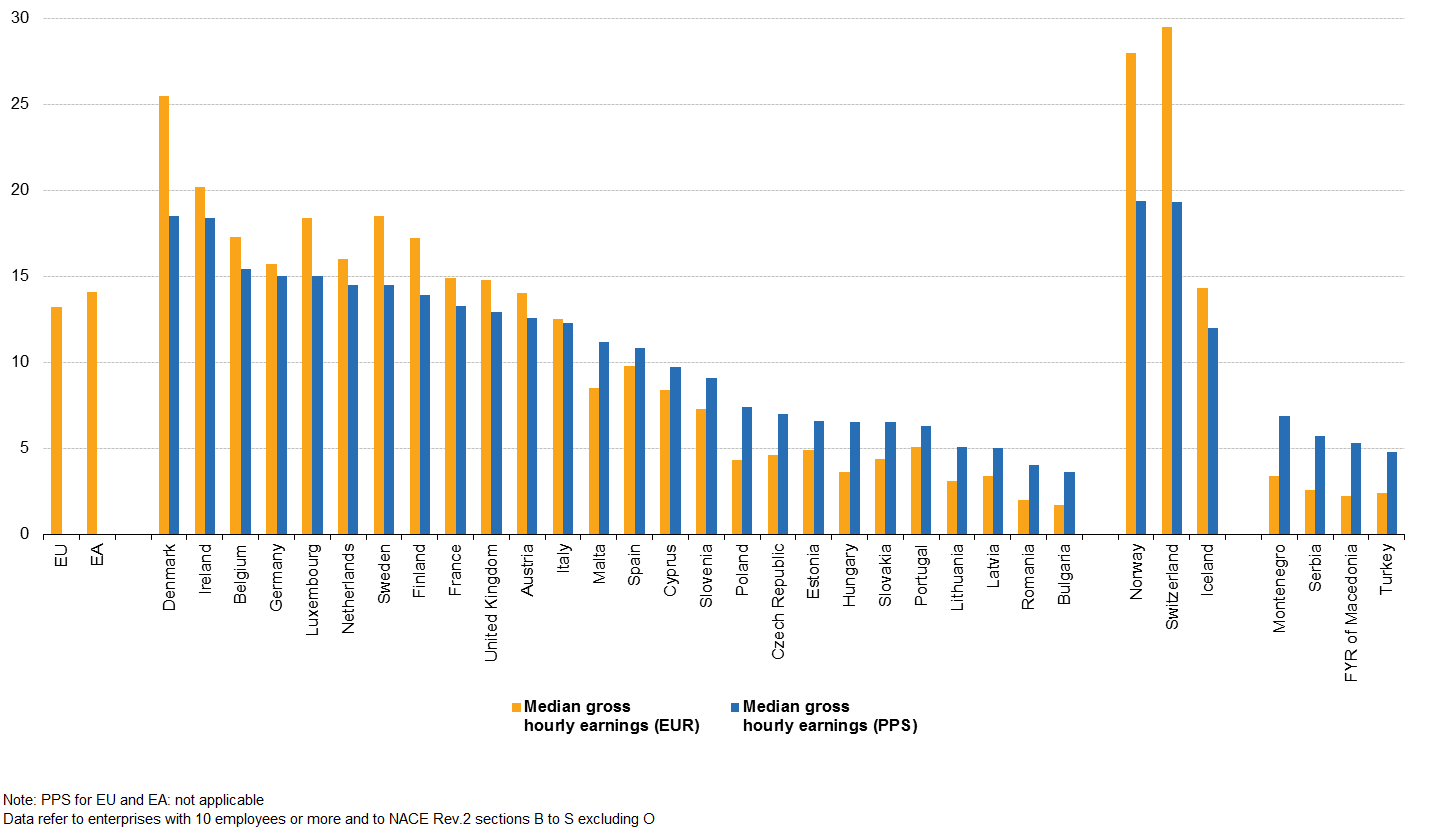 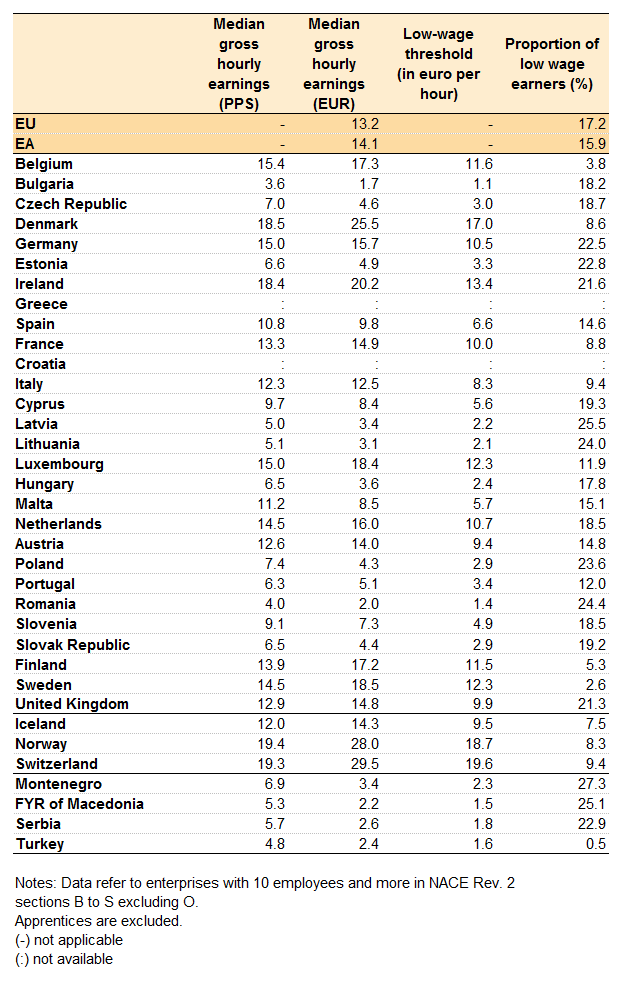 Low-wage earners are defined as those employees earning two thirds or less of the national median gross hourly earnings. Hence, the threshold that determine low-wage earners is relative and specific to each Member State.

Highest share of low-wage earners in Latvia, lowest in Sweden 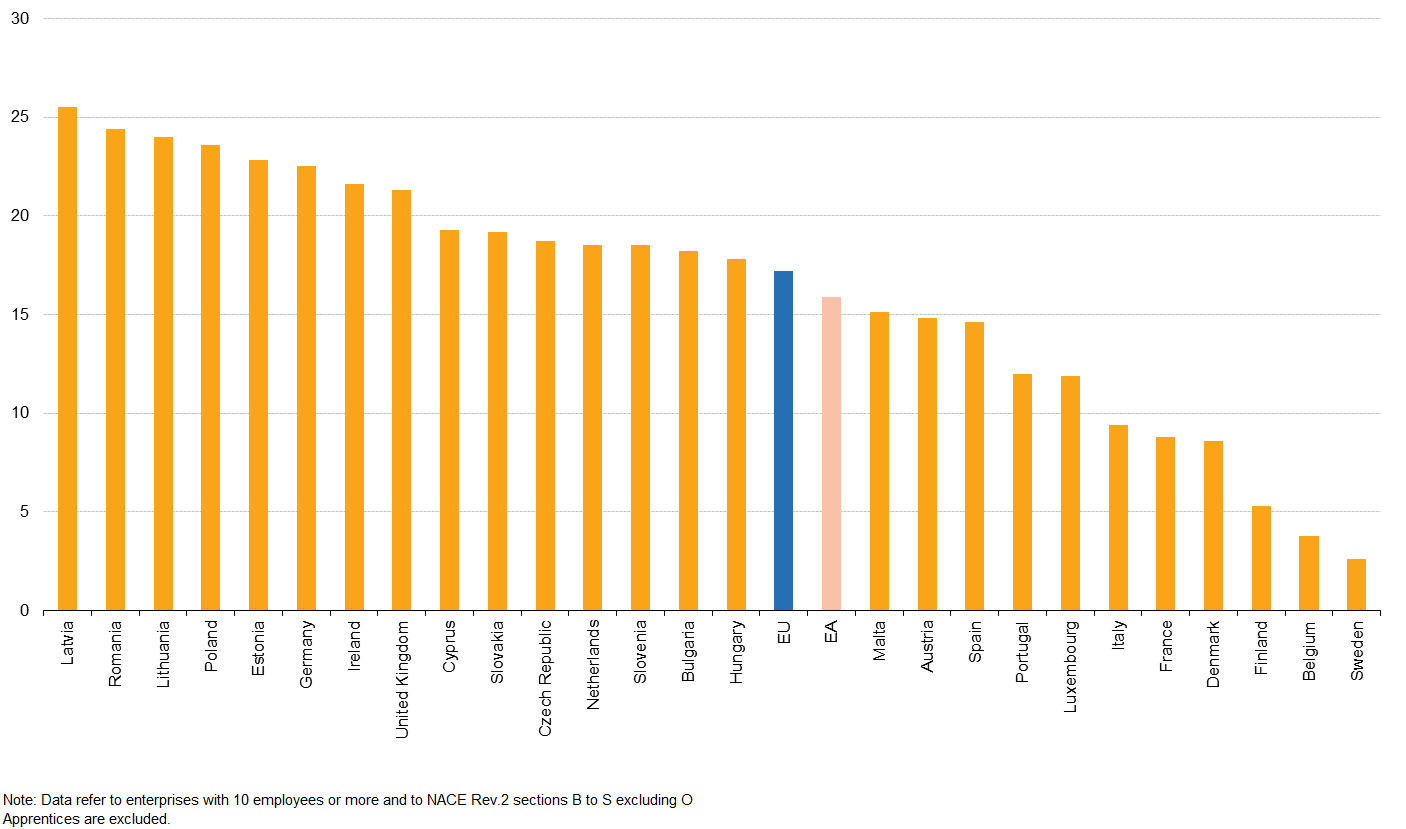 Low-wage earners by sex, age groups, level of education and type of contract, 2014

Figure 3: Proportion of low-wage earners in the EU, by sex, age groups, level of education and type of contract, %, 2014 - Source: Eurostat (earn_ses_pub1s)

How are earnings distributed in the EU?

Gross hourly earnings vary sizeably across Member States and economic activities. Notable discrepancies can be observed in the Member States of the European Union (EU) in gross hourly earnings, not only between the 10% of employees earning the least and the 10% earning the most, but also according to the economic activity, with financial and insurance activities being among the highest paying industries in every EU Member State and accommodation and food services among the lowest paying.

Data on distribution of earnings, as well as corresponding median gross hourly earnings refers to all employees (including apprentices) working in enterprises with 10 employees or more and which operate in all sectors of the economy except agriculture, forestry and fishing (NACE Rev. 2 section A) and public administration and defence; compulsory social security (NACE Rev. 2 section O). EU and EA aggregates are compiled as the sum of all except Greece (EL) and Croatia (HR) for which data was not available at the time of drafting this article. 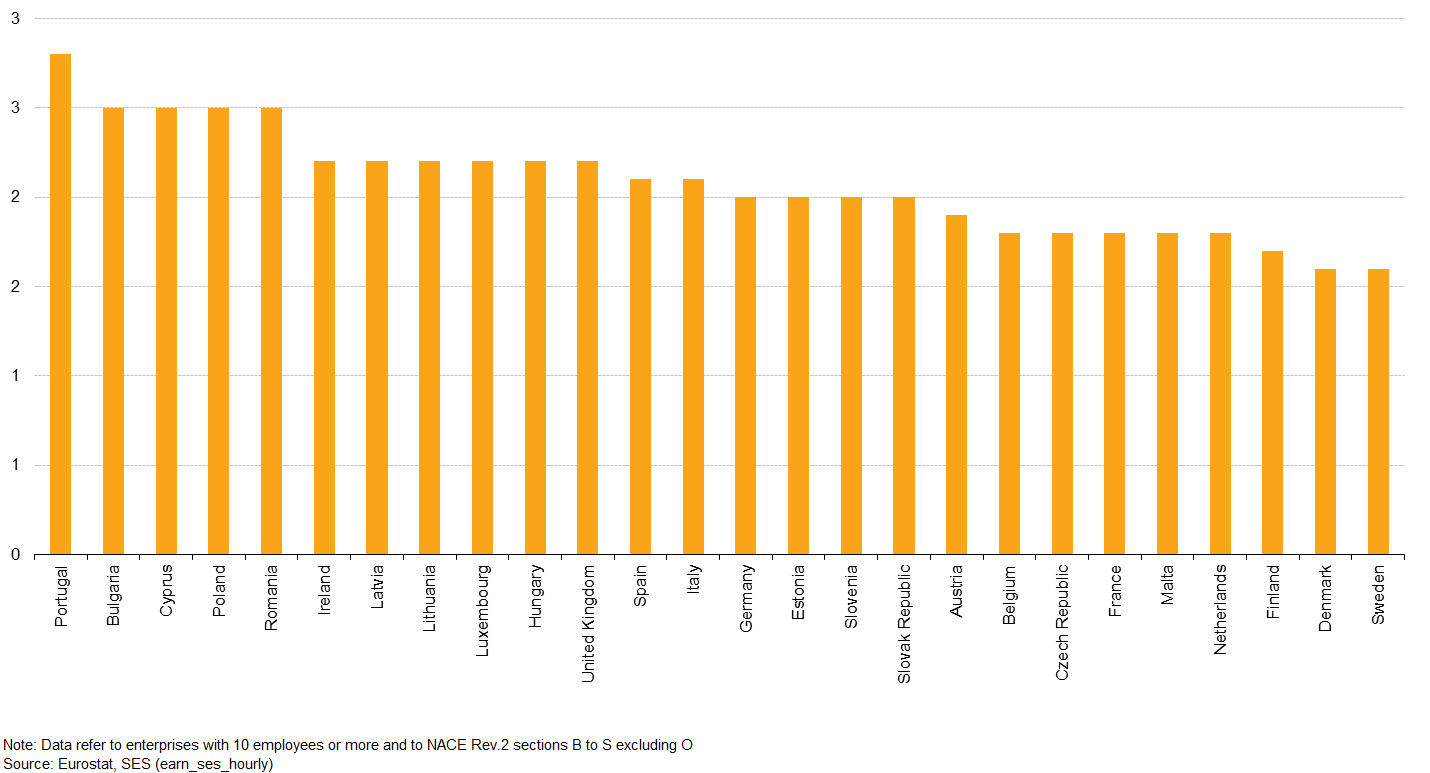 The highest disparity on the upper end of the gross hourly earnings distribution in 2014 was registered in Portugal (with a D9/Median ratio of 2.8). This means that the 10% best paid employees in Portugal earned almost three times as much the median. Portugal is followed by Bulgaria, Cyprus, Poland and Romania (all with a ratio of 2.5), Latvia (2.3), as well as Ireland, Lithuania, Luxembourg, Hungary and the United Kingdom (all 2.2). In contrast, Sweden and Denmark (both with a ratio of 1.6), Finland (1.7), Belgium, France, Malta and the Netherlands (all 1.8) recorded the lowest. (Table 2) 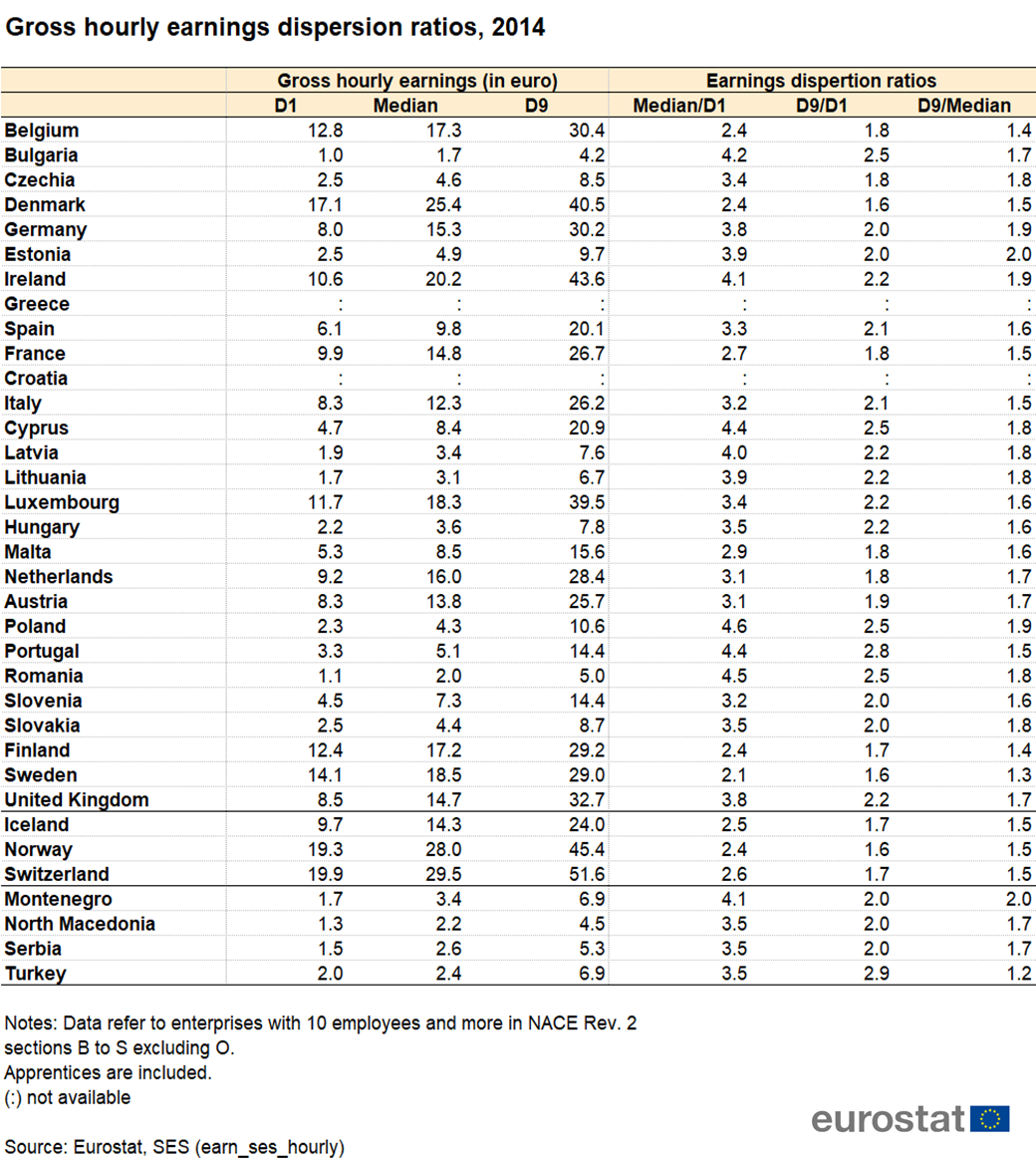 For the lower end of the gross hourly earnings distribution, disparities in 2014 were largest in Estonia (with a Median/D1 ratio of 2.0). This means that, in Estonia, the 10% least paid employees earned half of the median earnings. Estonia is followed by Germany, Ireland, Poland and Romania (all 1.9), the Czech Republic, Cyprus, Lithuania and Slovakia (all 1.8). At the opposite end of the scale, the lowest disparities in the lower end of distribution were recorded in Sweden (with a ratio of 1.3), Finland and Belgium (both 1.4), Denmark, France, Italy and Portugal (all 1.5). (Table 2)

And what about economic activities?

Finance & insurance and Information & communication among the highest paying industries…

On the basis of gross monthly earnings, "Financial and insurance activities" ranked among the 3 highest paying economic activities in every EU Member State, except Ireland (where it ranked 4th). The sector "Information and communication" was also largely represented among the top 3 paying industries, with the exceptions of Belgium, Spain and the Netherlands (where it ranked 4th), Italy and Luxembourg (5th position) and Cyprus (6th place). (Table 3) 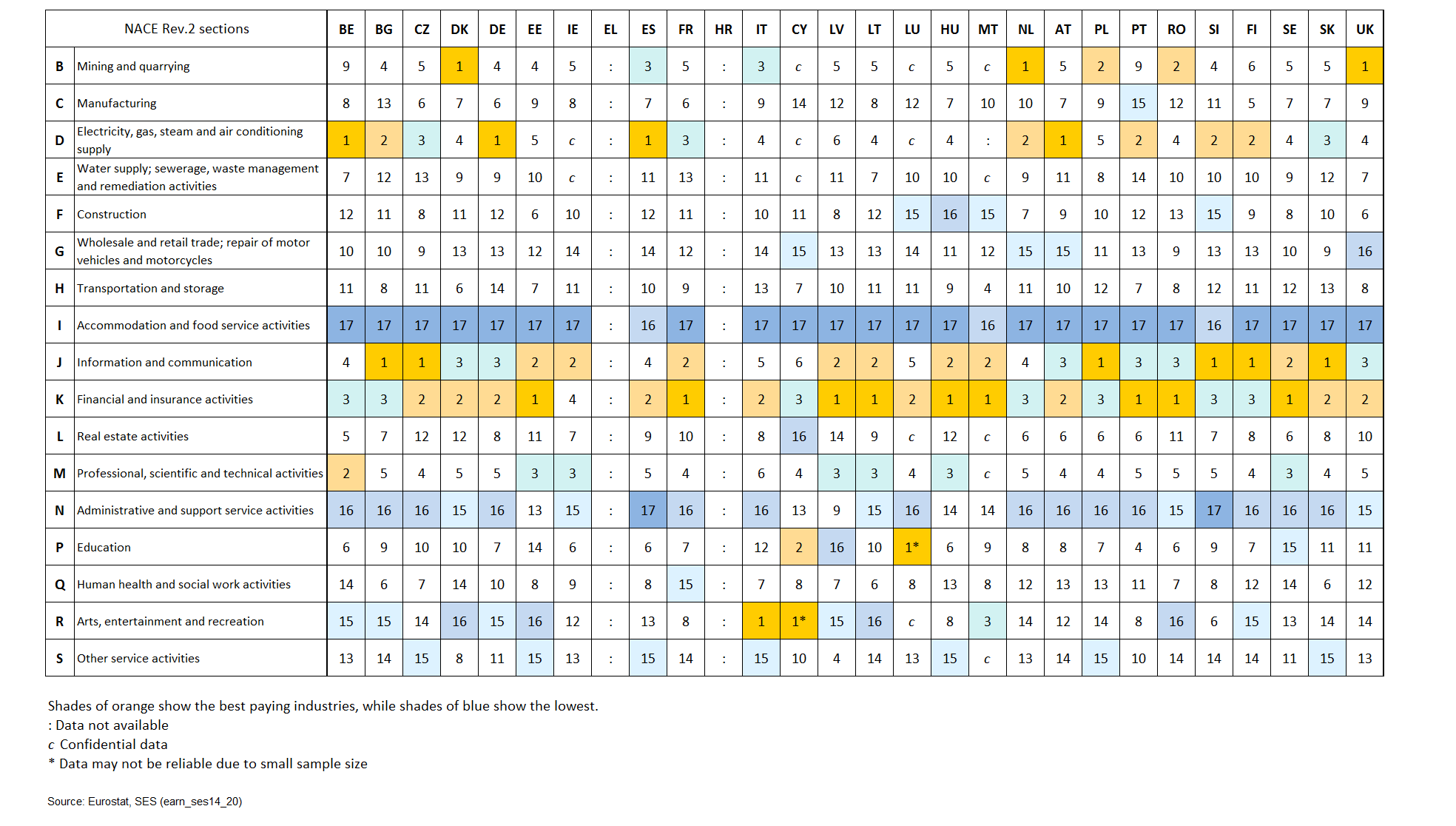 "Electricity, gas, steam and air conditioning supply" was the best paying industry in Belgium, Germany, Spain as well as Austria, and ranked second in Bulgaria, the Netherlands, Portugal, Slovenia and Finland. "Mining and quarrying" ranked first in Denmark, the Netherlands and the United-Kingdom and second in Poland and Romania. As for "Education", it was the best paying economic activity in Luxembourg and the second in Cyprus. Finally, "Professional ,scientific and technical activities" ranked among the 2 highest paying industries in only one Member Sate: Belgium. (Table 3)

… Accommodation & food and Administrative and support services among the lowest paying

At the opposite end of the ranking, "Accommodation and food service activities" was identified in 2014 as the lowest paying activity of the economy in all Member States, except Spain, Malta and Slovenia (where it was the penultimate). "Administrative and support service activities" also ranked widely in the bottom 3, with the exceptions of Hungary, Malta (last but 3 position), Estonia and Cyprus (last but 4) and Latvia. (Table 3)

The Structure of earnings survey (SES) is carried out with a four-yearly periodicity according to Regulation (EC) No 530/1999. The most recent available reference years for the SES are 2002, 2006, 2010 and 2014. The data collection is based on legislation and data become available approximately 2 years after the end of the reference period.

The statistics of the SES refer to enterprises employing at least 10 employees in all areas of the economy except agriculture, forestry and fishing (NACE Rev. 2 section A) and public administration and defence; compulsory social security (NACE Rev. 2 section O). Economic activites are classified using the Statistical classification of economic activities in the European Community (NACE). SES 2002 and 2006 are classified in NACE Rev.1.1 whereas SES 2010 and 2014 are classified in NACE Rev.2. The inclusion of section L (in 2002 and 2006) and section O (in 2010) as well as the inclusion of enterprises with fewer than 10 employees is optional.

The regional breakdown is based on the Nomenclature of territorial units for statistics (NUTS).

The SES is a large enterprise sample survey providing detailed and comparable information on relationships between the level of remuneration, individual characteristics of employees (sex, age, occupation, length of service, highest educational level attained, etc.) and their employer (economic activity, size and location of the enterprise).

The SES represents a rich microdata source for European policy-making and research purposes. Access to microdata is granted to researchers according to specific conditions and respecting statistical confidentiality.