This article is based on the comparison of two vintages of the 4-yearly Labour cost survey (LCS), with reference years 2008 and 2016, highlighting changes in hours worked, hourly labour costs and hourly wage costs between the two reference years. For 2016 labour cost levels see: Labour cost structural statistics - levels.

Changes in labour cost can be split into changes in the volume of labour input (total number of hours worked, number of employees) and prices (hourly labour costs) (Figure 1). 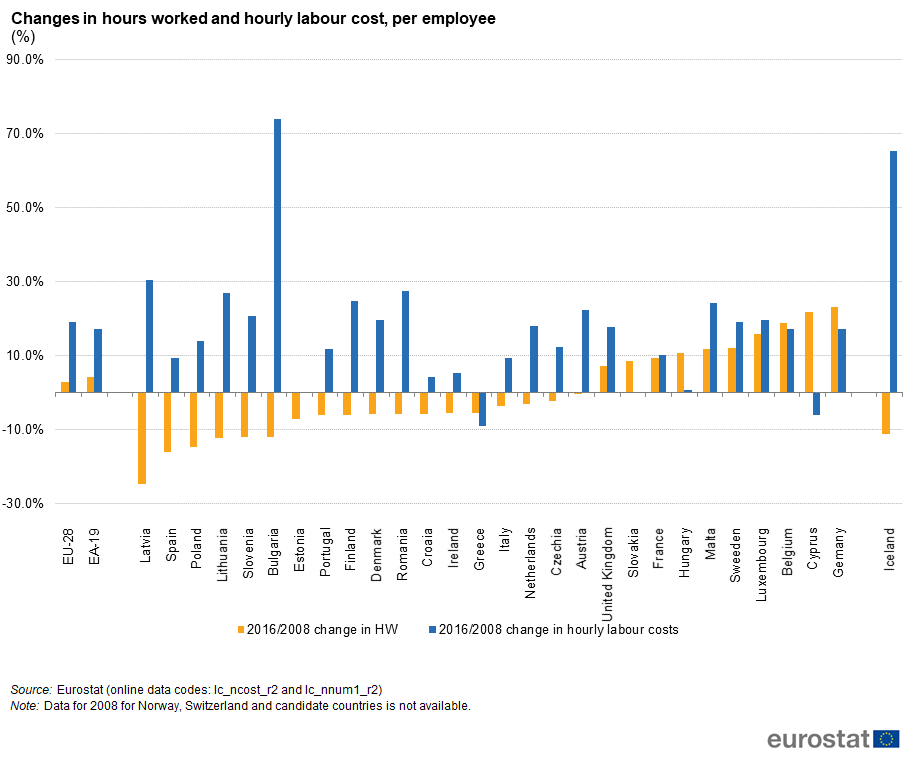 In terms of labour input, the total number of hours worked increased by 2.7 % in the EU and 4.3 % in the euro area, with large differences across countries. An increase in the total number of hours worked was recorded in ten EU Member States, ranging between 7.1 % in the United Kingdom and 23.2 % in Germany. At the same time, a decrease was recorded in the remaining 18 EU Member States, ranging between -0.4 % in Austria and -24.6 % in Latvia. While several Member States recorded a decrease of more than 10 % (Latvia, Spain, Poland, Lithuania, Slovenia and Bulgaria), some recorded an increase of more than 10 % (Germany, Cyprus, Belgium, Luxembourg, Sweden, Malta and Hungary).

Changes in number of employees and hours worked per employee 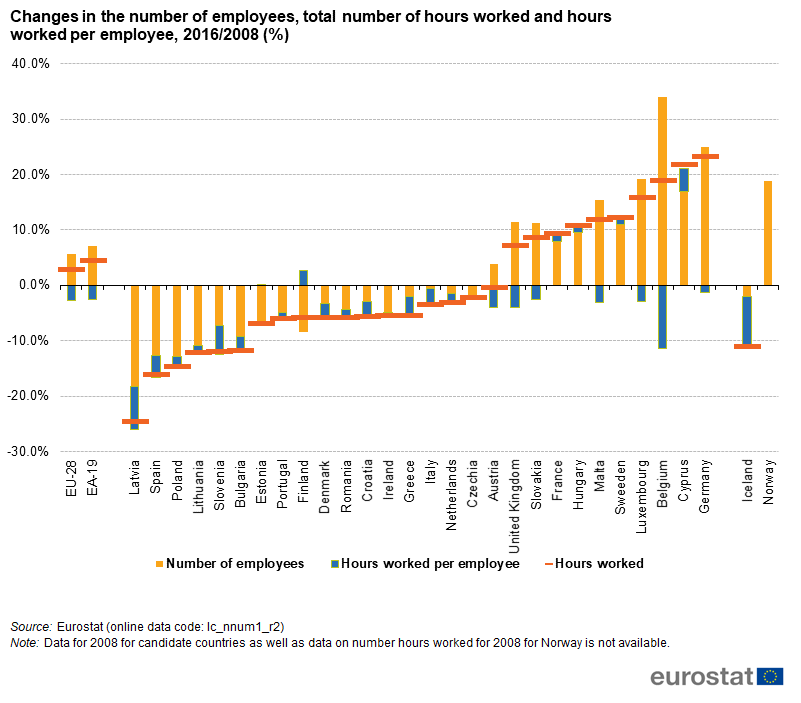 Changes in the number of hours worked and the number of employees may be significantly impacted by methodological differences between LCS 2008 and 2016. 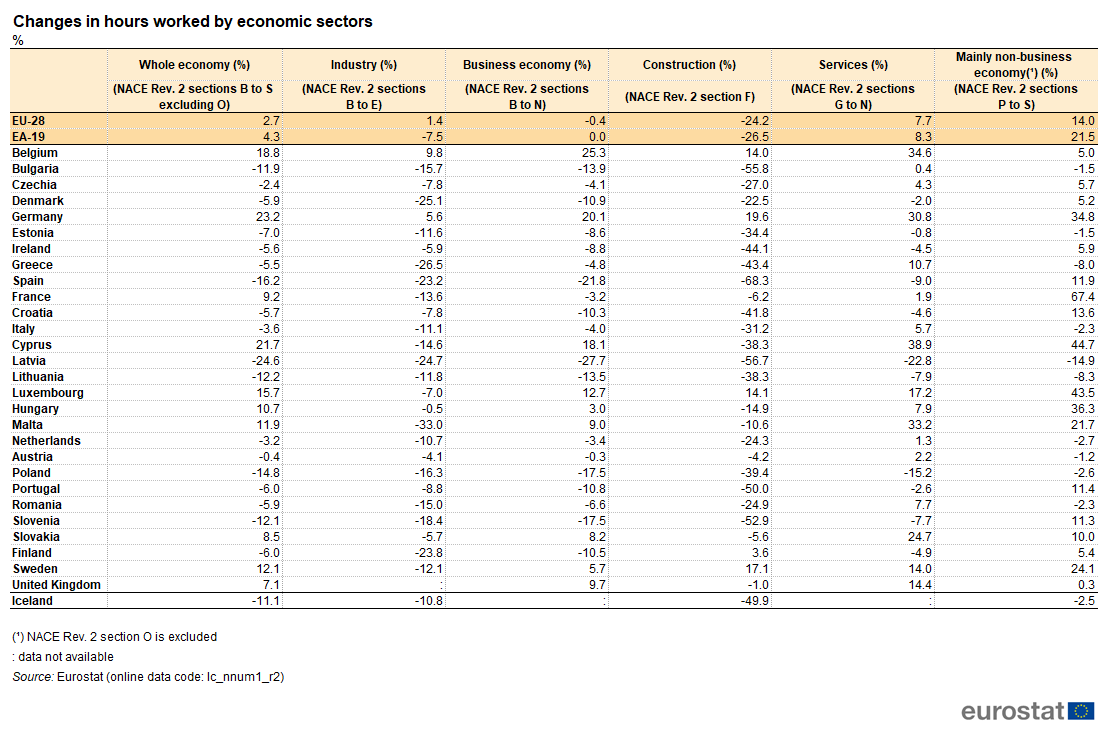 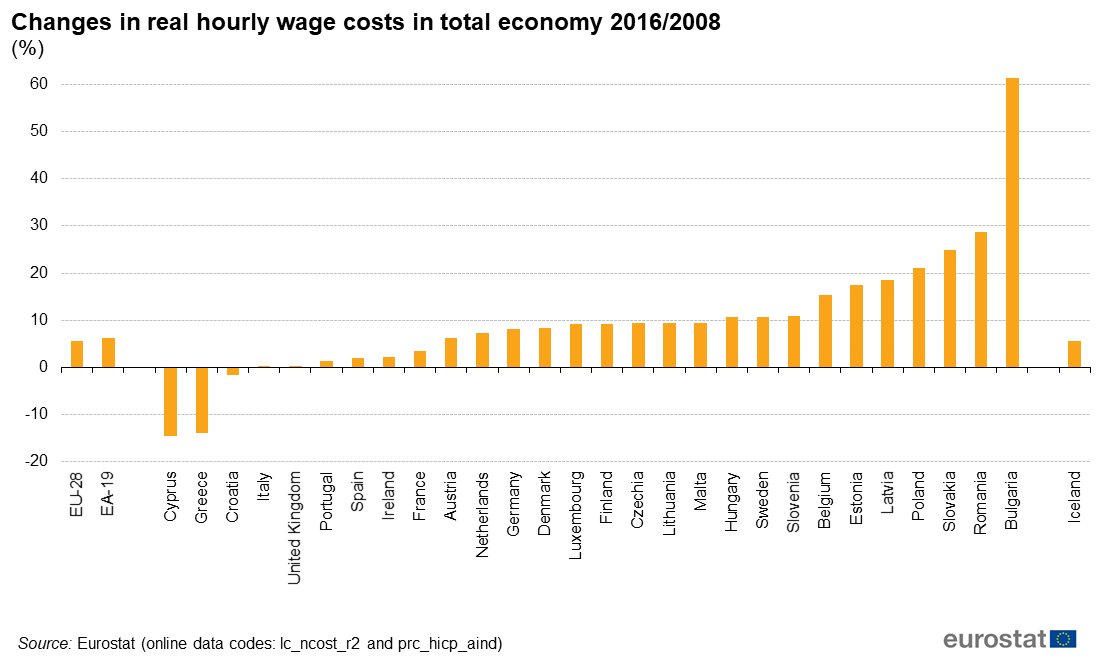 Wage and salary costs ('wage costs') include direct remunerations, bonuses, and allowances paid by an employer in cash or in kind to an employee in return for work done, payments to employees saving schemes, payments for days not worked and remunerations in kind such as food, drink, fuel, company cars, etc. They include social contributions, income taxes, and other payments payable by the employee, including those withheld by the employer and paid directly to social insurance schemes, tax authorities, etc. on behalf of the employee. They exclude social contributions payable by the employer. Changes in hourly wage costs are calculated as a Laspeyres index - the average of 2016/2008 changes, in national currency, across all NACE sections (except agriculture and public administration) weighted by the number of hours worked recorded in 2008 for the corresponding NACE section. To express changes in real terms, the Laspeyres index in nominal terms is divided by the 2016/2008 changes in the harmonized index of consumer prices published in Eurobase table [prc_hicp_aind]. 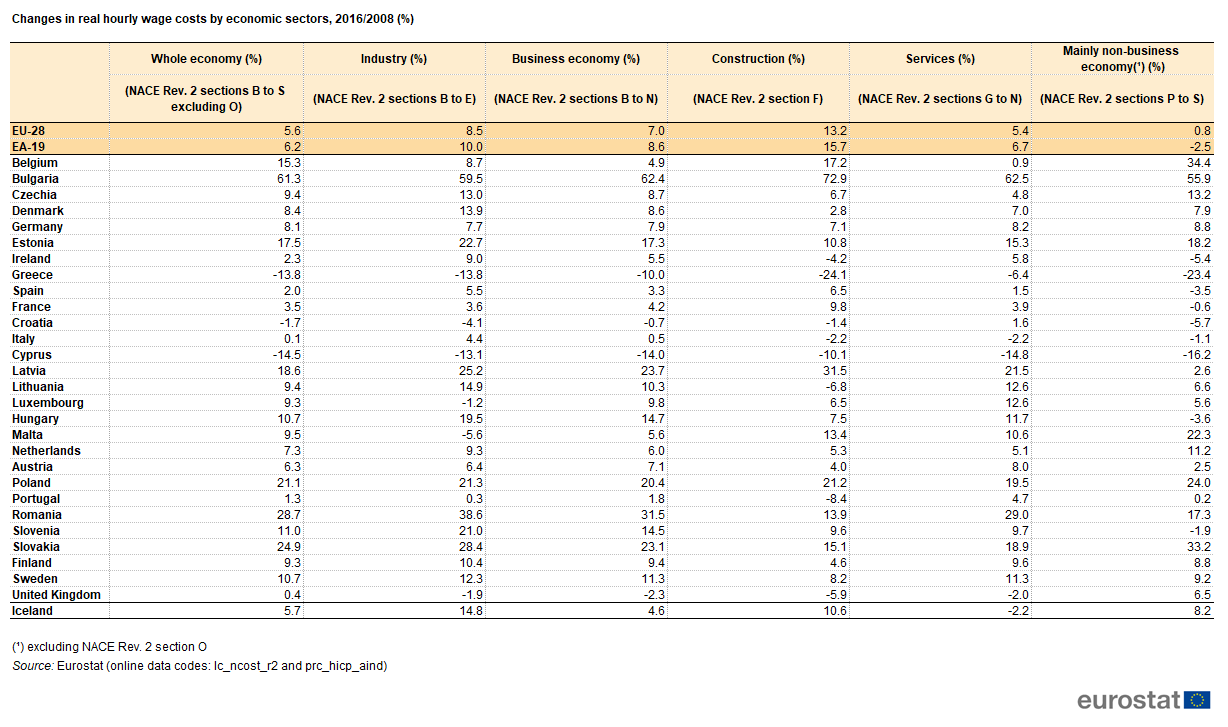 Changes in hourly labour cost in euro and national currency

The largest positive contribution to changes in the hourly labour cost expressed in national currency was observed in Bulgaria (+46 %), Latvia (+39 %) and Romania (+36 %). At the same time, largest negative contribution was recorded in Cyprus (-17 %) and Greece (-15 %). 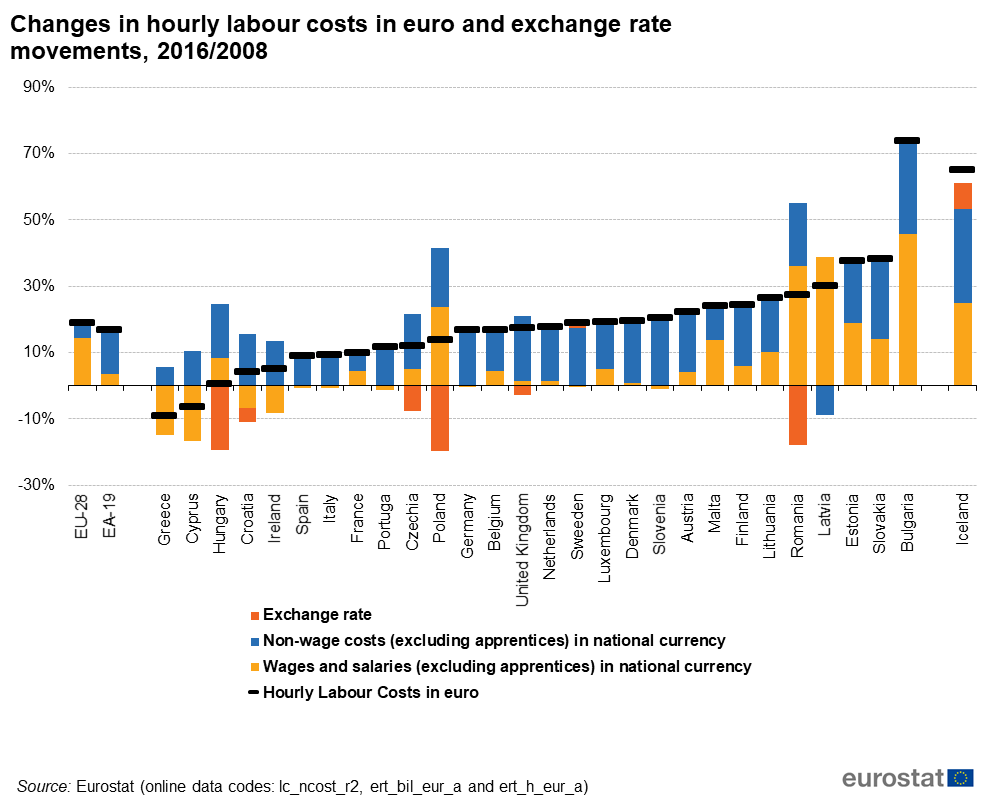 The Labour cost survey (LCS) provides details on the level and structure of labour cost data, hours worked and hours paid for employees in the European Union (EU).

Employees include all persons employed at the observation unit and with an employment contract (permanent or not), except family workers; home workers; occasional workers; persons wholly remunerated by way of fees or commission; board of Director Members; directors/managers paid by way of profit share or by fee; self-employed persons. Data do not cover apprentices except in the case where they represent a low share of the total labour force (less than 1 %).

If not otherwise stated, data refer to full-time and part-time employees working in enterprises employing 10 employees or more, in all economic sectors except: agriculture, forestry and fishing (NACE Rev. 2 Section A) and public administration and defence; compulsory social security (NACE Rev. 2 Section O). The LCS data for NACE section O are transmitted by countries on voluntary basis.

Hours worked are defined as the periods of time employees spent on direct and ancillary activities to produce goods and services, including normal periods of work, paid and unpaid overtime and time spent on preparation, maintaining, repairing, cleaning and writing reports associated to main work. They exclude periods of vacation and other public holidays, sick leave and other type of absence which employees are paid for.
It should be noted that data for Belgium has a break in the series between 2008 and 2016.

Labour costs refer to the total expenditure borne by employers in order to employ staff. They cover wage and non-wage costs less subsidies. They do include vocational training costs or other expenditures such as recruitment costs, spending on working clothes, etc.