In 2020, about two thirds (63.9 %) of ICT specialists in the EU had completed a tertiary level of education.

This article provides an overview of recent developments in the demand for information and communication technology (ICT) specialists in Europe using data on employment as a proxy. ICT specialists are defined as persons who have the ability to develop, operate and maintain ICT systems and for whom ICTs constitute the main part of their job (OECD, 2004).

The introduction of new technologies and digitalisation — often referred to as the ‘fourth industrial revolution’ — is having an impact on society through changes to the way that people live, work and interact with one another. ICTs have already been the cause of significant changes to methods of production and patterns of employment within the European Union (EU). Policymakers and researchers therefore have an interest in tracking employment developments for ICT specialists, as these influence a country’s comparative advantage in the development, installation and servicing of ICTs.

Relative share of ICT specialists in the total workforce

Across the whole of the EU, ICT specialists accounted for 4.3 % of the total workforce in 2020 (see Figure 1). 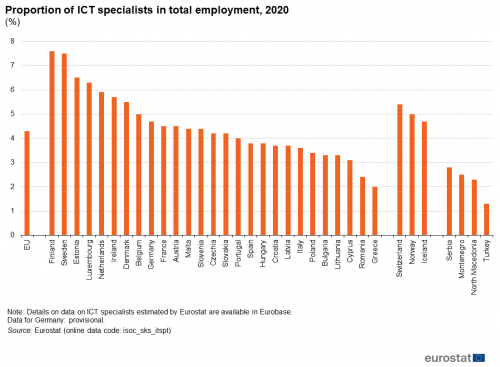 General developments in the demand for ICT specialists

During the last decade, the number of persons employed as ICT specialists in the EU generally held out against the effects of the global financial and economic crisis and the downturn experienced in many labour markets. As a consequence, the share of ICT specialists in total employment increased by 1.3 percentage points from 3.0 % in 2011 to 4.3 % in 2020 (Figure 2). 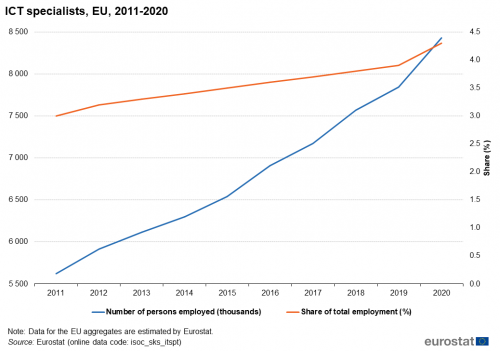 The number of persons employed as ICT specialists grew by 50.0 % during the period from 2011 to 2020, which was slightly less than 9 times as high as the corresponding increase (5.5 %) for total employment (see Figure 3). Between 2019 and 2020, the progression path became steeper (with a rate of 7.5 % compared to the average annual growth rate of 5.2 % over the decade), which could be due to the digital transformation affecting the whole economy. 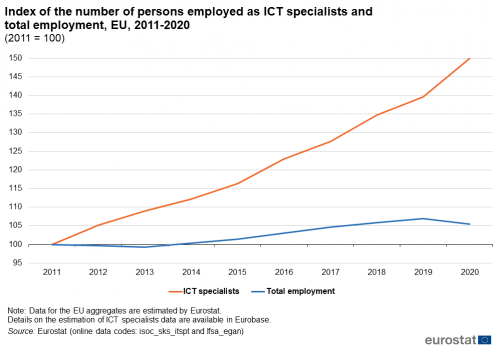 Among non-EU countries, the most pronounced gender gap among ICT specialists in 2020 was registered in Turkey (where men accounted for 83.2 % of the ICT workforce compared with 16.8 % for women). In the three EFTA countries for which data are available, the gender distribution of the ICT workforce in 2020 was relatively similar to that in the EU, as the male shares of ICT specialists ranged from 83.7 % in Switzerland to 79.1 % in Iceland.

Figure 5: Average annual rate of change for the number of persons employed as ICT specialists by sex, 2011-2020
(%)
Source: Eurostat (isoc_sks_itsps)

The share of ICT specialists with a tertiary level of educational attainment increased during the most recent decade for which data are available, rising from 54.9 % in 2011 to 63.9 % in 2020; in other words, the share of ICT specialists that had a high level of educational attainment rose by 8.9 percentage points between 2011 and 2020. 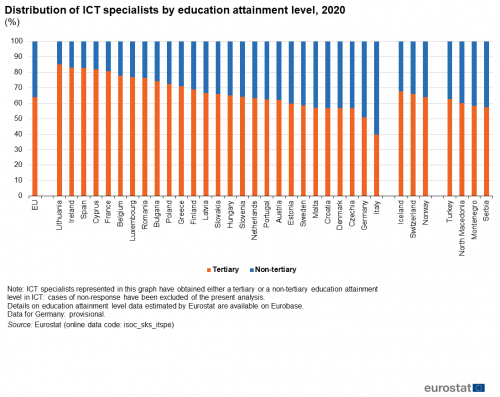 The age distribution of ICT specialists has been analysed using two age groups: persons aged 15-34 years and those aged 35 years and over, with an upper age for employment limited at 74 years (see Figure 7 and Table 1).

In 2020, less than two thirds (63.6 %) of all persons employed as ICT specialists in the EU were aged 35 years and over. The proportion of ICT specialists in this older age group increased by 3.7 percentage points between 2011 and 2020. This rising share may reflect, among others, changes in the age structure of the EU population (with relatively few young compared with middle and older-aged people) and/or a growing share of young people extending their stay within the education system rather than quickly entering the labour market. This statement is illustrated by Slovakia which experienced the highest progression of the 35 years old and over ICT specialists with 16.2 percentage points difference between 2011 and 2020, whereas Luxembourg observed a rejuvenation of ICT specialists with an increase of 12.2 percentage points of the younger age group. 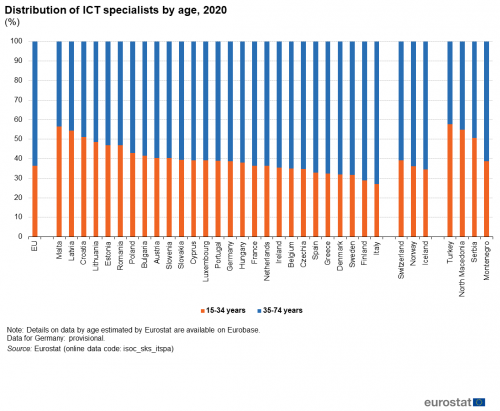 Among the non-member countries, Turkey and North Macedonia stood out as a large majority (57.7 % and 54.8 % respectively) of their ICT specialists in 2020 were aged 15-34 years. The three EFTA countries observed the same pattern of age distribution as most EU Member States, with people aged 35 years and over accounting for 60.8 % of the total number of ICT specialists in Switzerland, 63.9 % in Norway, and 65.6 % in Iceland.

Statistics for ICT specialists are constructed on the basis of the OECD definition (outlined at the start of this article) which is built on the International Standard Classification of Occupations (ISCO). For data up until 2010, the definition was based on ISCO-88, whereas the data from 2011 onwards are based on ISCO-08; as such, there is a break in series in 2011. Under ISCO-08, Eurostat and the OECD define ICT specialists as people with the following occupations: ICT service managers; information and communications technology professionals (software and multimedia developers and analysts, and database specialists and systems administrators); information and communications technicians (ICT operations and user support technicians, and communications technicians); electronic engineers; telecommunication engineers; graphic and multimedia designers; information technology trainers; ICT sales professionals; electronics engineering technicians; electronics mechanics and servicers; ICT installers and servicers.

Digitalisation and automation can generate new business opportunities through the development of new production processes, new products and new markets. Indeed, the impact of information and communication technologies within the workplace has generally resulted in increased productivity and efficiency, as well as a range of possibilities for more flexible working practices. While these changes have generated a wide range of new jobs, the introduction of ICTs has also led to job losses, for example, as a result of automation.

Digital transformation is high on the European policy agenda, with making Europe fit for the digital age and empowering its citizens and businesses with a new generation of technologies being one of the main political priorities of the European Commission for the coming years. On 9 March 2021, the Commission presented the Digital Decade Communication, which sets a vision and targets for a successful digital transformation of Europe by 2030. The Commission proposed a digital compass, which sets out a way for achieving the EU’s ambitions for a human centred, sustainable and prosperous digital future. In particular, digitally skilled citizens and highly skilled digital professionals forms one of the fours cardinal point of the digital compass. The objective is to reach 20 million employed ICT specialists in the EU by 2030, coupled with a greater convergence of gender balance in taking up such jobs. Monitoring the employment of ICT specialists is therefore important. In recent years, EU policies have given greater attention to ICT skills and in particular to the employment of ICT specialists as strong digital skills should strengthen the EU’s competitive position in the digital world and drive Europe towards a more equal society. The European Skills Agenda launched to ensure that the right training, the right skills and the right support are available for people in the EU, have been extended by the Digital Skills and Jobs Coalition to support cooperation between education, employment and industry to develop a pool of digital talent in the EU. Individuals and the labour force in general shall be equipped with adequate digital skills to prevent the loss of key ICT jobs in the European Union to other regions of the world. In parallel, the European Commission is bringing together EU Member States and a range of stakeholders to pledge actions and to monitor progress in developing digital skills through its Digital Progress Report and the Digital Economy and Society Index.