Among the candidate countries and potential candidates for which data is available for 2020, R & D expenditure as a percentage of GDP was the highest in Turkey, with 1.1 %, followed by Serbia with 0.9 %, while in the EU it was 2.3 %.

The business enterprise sector accounted for 57 % of the R & D expenditure in Turkey in 2020. This sector provided between 2 % and 38 % of all funds for R & D in the other candidate countries and potential candidates, for which data is available.

This article is part of an online publication. It provides information on a range of statistics related to research and development (R & D) activities in the European Union (EU) candidate countries and potential candidates, in other words the enlargement countries. Montenegro, North Macedonia, Albania, Serbia and Turkey currently have candidate country status, while Bosnia and Herzegovina as well as Kosovo* are potential candidates. Research and development can be defined as creative work undertaken on a systematic basis in order to increase the stock of knowledge, including knowledge of man, culture and society, and the use of this knowledge to devise new applications. 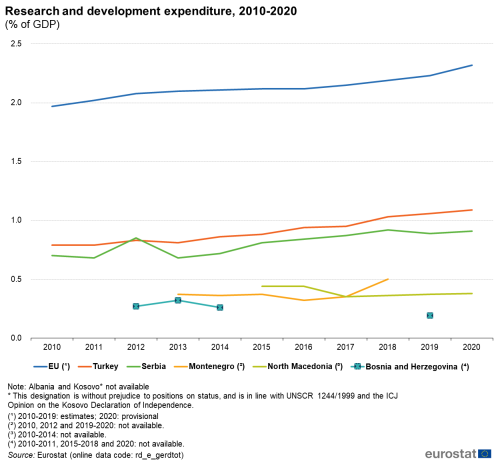 Analysing the source of funds for research and development, illustrated in Figure 2, in Turkey, the business enterprise sector was the largest source of funding for R & D, providing 57.2 % of funds in 2020. Government accounted for over 28.4 % of funds and the higher education sector 12.3 %. Funds from abroad accounted for 2.0 % of the total.

Research and development personnel and researchers

R & D personnel consist of all individuals employed directly in the field of R & D, including persons providing direct services, such as managers, administrators and clerical staff. Research and development personnel as a percentage share of all persons employed, measured on a full-time equivalent basis, is used to make comparisons over time and between countries. 2015 data is used as the base date since there is insufficient data for earlier periods. The data is illustrated in Figure 3.

Figure 3: Research and development personnel, 2015 and 2020
(% share of all persons employed; based on full-time equivalent units)
Source: Eurostat (rd_p_perslf)

In a number of areas, candidate countries (and sometimes also potential candidates) are in a position to provide harmonised data in accordance with the EU acquis with respect to methodology, classifications and procedures for data collection and the principles of official statistics as laid down in the European statistics Code of Practice. In these cases, the candidate countries (and potential candidates) concerned report their data to Eurostat following the same procedures and under the same quality criteria as the EU Member States and the EFTA countries. Data from the enlargement countries that meet these quality requirements are made available free-of-charge on Eurostat’s website, along with data for EU Member States and EFTA countries.

The definitions of basic concepts, data collection guidelines, and classifications for compiling research and development (R & D) statistics are available in Frascati Manual. Eurostat data on R & D aim to show a comprehensive picture of the situation in the EU, covering indicators related to expenditure and personnel. Most of the main indicators within this domain are available at a national and a regional level for the EU Member States.

R & D is the main driver of innovation, with the level of R & D expenditure and the ratio of R & D intensity being two of the key indicators used to monitor resources devoted to science and technology.

The European Research Area (ERA) aims to create a single, borderless market for research, innovation and technology across the EU. The free circulation of researchers and knowledge enables:

This initiative was revitalised in 2018. Its current targets are to:

Information concerning the current statistical legislation on R & D can be found here.

Eurostat has the responsibility to ensure that statistical production of the enlargement countries complies with the EU acquis in the field of statistics. To do so, Eurostat supports the national statistical offices and other producers of official statistics through a range of initiatives, such as pilot surveys, training courses, traineeships, study visits, workshops and seminars, and participation in meetings within the European Statistical System (ESS). The ultimate goal is the provision of harmonised, high-quality data that conforms to European and international standards.