This article is part of an online publication and provides information on a range of population statistics for the European Union (EU) enlargement countries, in other words the candidate countries and potential candidates. Montenegro, North Macedonia, Albania, Serbia and Turkey currently have candidate status, while Bosnia and Herzegovina as well as Kosovo* are potential candidates.

The article gives an overview of demographic developments in the candidate countries and potential candidates, presenting indicators such as the total population, crude birth and death rates, fertility rates, life expectancy and the infant mortality rate.

The recommended definition of total population is the ‘usual resident population’, which represents the number of inhabitants of a given area. Eurostat uses the reference date of 1 January of the year in question. In some cases, the 31 December of the previous year is used.

In the EU, the population grew by 1.4 % over 2010-2021, an annual average of 0.13 %. Its growth path is very similar to North Macedonia in particular; this makes it difficult to distinguish the lines in Figure 1. 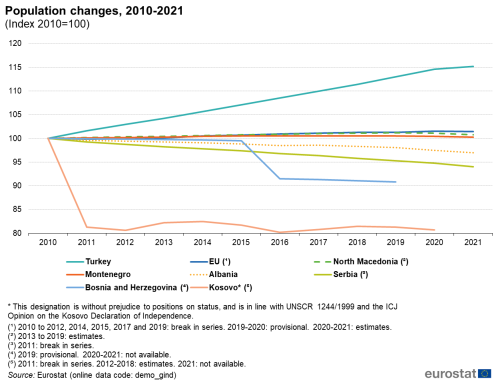 The working age population, defined as those aged 15-64 years, accounted for 64.5 % of the total population in Serbia in 2021, the lowest share among candidate countries and potential candidates. The highest share was 69.1 % in North Macedonia. Data is not available for Bosnia and Herzegovina. Working age people accounted for less than two thirds, 64.1 %, of the total population in the EU in 2021.

The crude rate of natural increase is calculated by subtracting the crude death rate from the crude birth rate. A positive result implies that the natural rate of population change (in other words, excluding the effects of migrant flows) is positive and so the population increases. The data are illustrated in Figure 3. 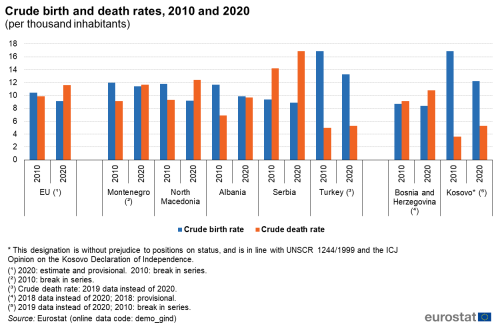 The total fertility rate is defined as the mean number of children who would be born to a woman during her lifetime, if she were to spend her childbearing years conforming to the age-specific fertility rates that have been measured in a given year. The data are illustrated by Figure 4. 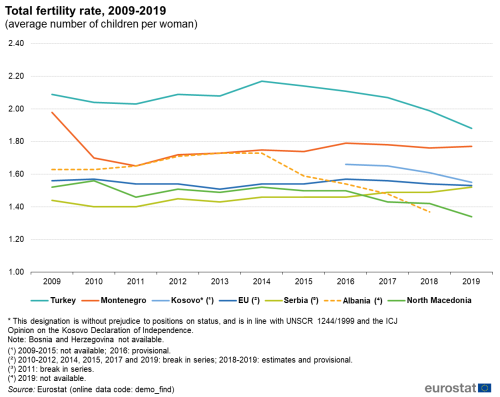 Life expectancy at a certain age is the mean additional number of years that a person of that age can expect to live, if subjected throughout the rest of his or her life to the current mortality conditions. Life expectancy at birth rose rapidly over the last century in most of the world due to advances in healthcare and medicine, linked especially to reduced infant mortality, as well as rising living standards, improved lifestyles and better education. 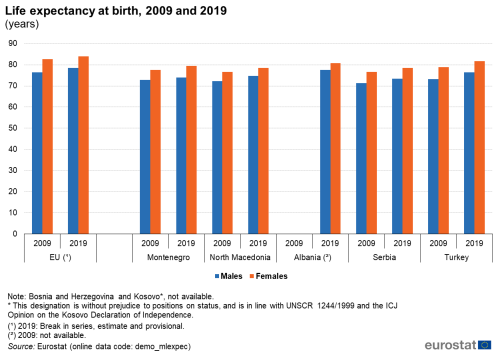 The infant mortality rate is defined as the ratio of the number of deaths of children under one year of age to the number of live births in the reference year; the value is expressed per thousand live births. 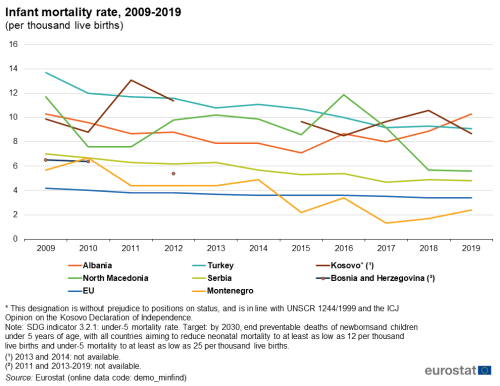 Data for the enlargement countries are collected for a wide range of indicators each year through a questionnaire that is sent by Eurostat to candidate countries and potential candidates. A network of contacts has been established for updating these questionnaires, generally within the national statistical offices, but potentially including representatives of other data-producing organisations, for example, central banks or government ministries.

Since 2016, the candidate countries and potential candidates provide population data directly to Eurostat’s unit responsible for population and migration statistics; these data have been used in this article. This mechanism operates in the same way as Eurostat’s regular collection of population data from EU Member States and EFTA countries. These statistics are also available free-of-charge on Eurostat’s website.

Eurostat provides a wide range of demographic data, including statistics on populations at national and regional level, as well as for various demographic factors influencing the size, the structure and the specific characteristics of these populations.

Population data for North Macedonia will be revised based on the 2021 census results which was released on 30 March 2022.

Population statistics are widely used to compare statistics relating to regions or countries that are inevitably of different sizes. Population is used as the denominator to normalise these data to a per person (per capita) basis. Examples include government expenditure per person between regions; hospital beds per thousand population; school places per thousand children within a specific age range. Population statistics are used both in policy development and in discussion of its outcomes.

Population statistics are the basis for distributing seats in democratic assemblies, where these are allocated geographically.

Population statistics are also used in business decisions, both at local level and in focussing on specific age ranges.

These statistics are used to analyse population ageing and its effects on the labour force and the age dependency ratio, so informing social and employment policies.

Information concerning the current statistical legislation on population and demography statistics can be found here: