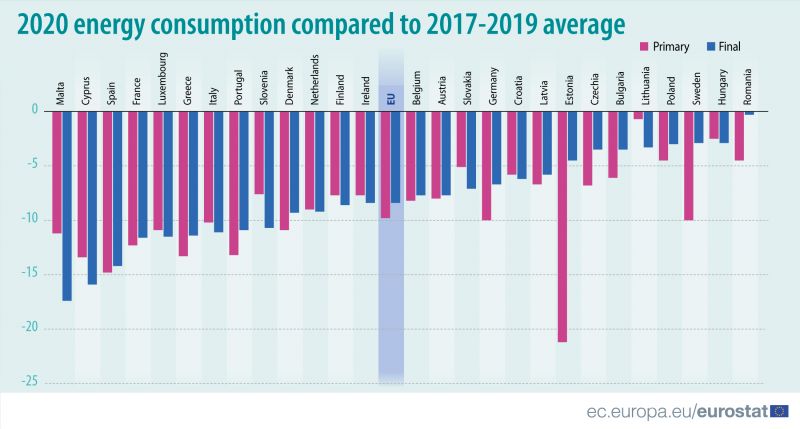 This article provides statistical evaluation of the energy consumption trends in relation to these objectives and describes the statistical method for its measurement.

Primary energy consumption and distance to 2020 and 2030 targets

Over the years, the primary energy consumption has fluctuated as energy needs are influenced by economic developments, the structural changes in industry, the implementation of energy efficiency measures and also the specific weather situation (such as cold vs. warm winters).In 2020, the key factor affecting the EU energy consumption was the COVID-19 related restrictions (e.g. lockdowns, curfews and travel restrictions). It reached the lowest levels since 1990 (the first year for which data are available).The primary energy consumption in the EU-27 dropped sharply to 1 236 million tonnes of oil equivalent (Mtoe), which is 5.8% better than the efficiency target for 2020, thus clearly outperforming it. Yet, this is still 9.6% away from the 2030 target, implying that efforts to improve efficiency need to be maintained in the years to come. Since its peak in 2006, it decreased by 18.1 %. The gap between the actual level of primary energy consumption and the target level in 2020 was 15.1 % in 2006. By 2014 the gap decreased to 1.4 % and subsequently increased to 5.4 % in 2017. After 2017 it was decreasing again. Please see data shown in Table 1 and Figure 1. 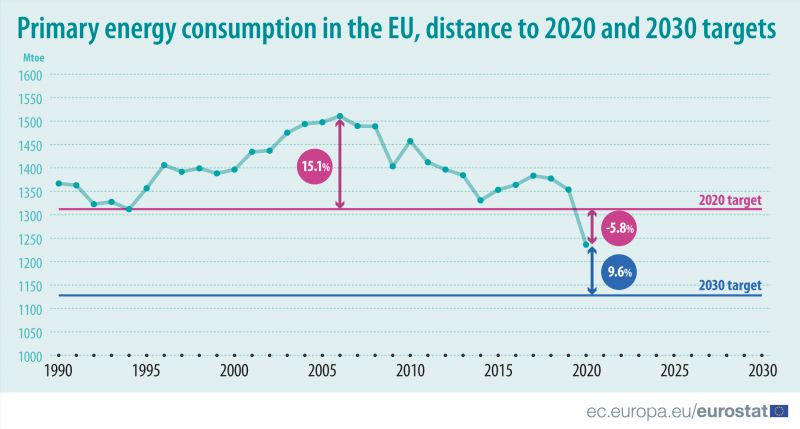 Final energy consumption and distance to 2020 and 2030 targets 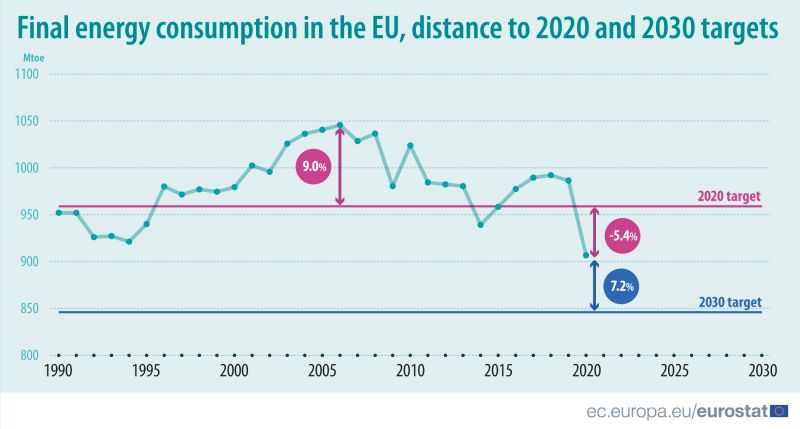 In 2020 the primary and final energy consumption in the EU-27 plummeted due to COVID-19 related restrictions. This section presents the evolution from before the COVID-19 pandemic (average of years 2017, 2018 and 2019) with the most recent period (year 2020). 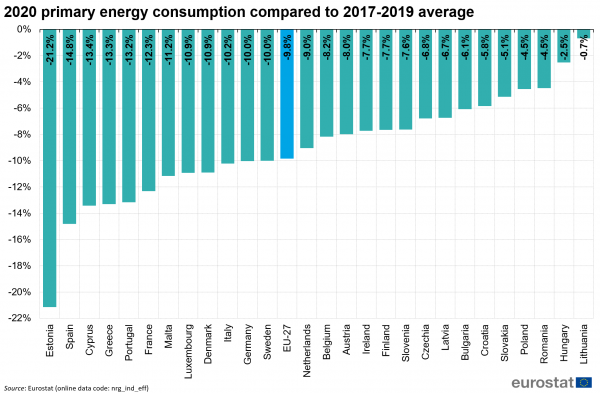 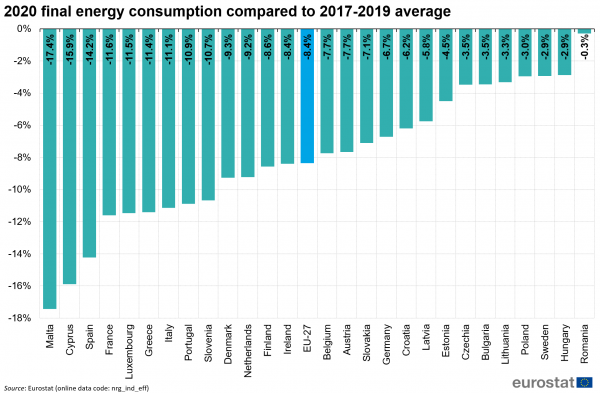 Data from energy balances have been used for all calculations. Data are available for all EU Member States and for all time periods from 1990. The most recent data available are for 2020. In general, data are complete, recent and highly comparable across countries. This results in high accuracy and accountability of EU aggregate figures.

The distance to target in relative terms (as percentage) is calculated as a ratio of the distance in a given year to primary and final energy consumption target in 2020 or 2030 according to Directive 2012/27/EU.

Europe cannot afford to waste energy. Energy efficiency is the most cost effective way to reduce emissions, improve energy security, enhance competitiveness and make energy consumption more affordable for all consumers. Energy efficiency is also one of the key factors in achieving our long-term energy and climate goals.

The European Council adopted in 2007 energy and climate change objectives for 2020:

As part of the European Green Deal, the Commission proposed in September 2020 to raise the 2030 greenhouse gas emission reduction target, including emissions and removals, to at least 55% compared to 1990. It looked at the actions required across all sectors, including increased energy efficiency and renewable energy, and started the process of making detailed legislative proposals to implement and achieve the increased ambition. In July 2021, the Commission proposed[4] a revision of Directive 2012/27/EU on energy efficiency, which include revised 2030 targets: 1 023 Mtoe for primary energy and 787 Mtoe for final energy.