This article analyses the trends in sport employment over the last few years, assesses its contribution to total employment and presents some of its characteristics - both at European Union (EU) and at country level.

In recent years, sport has acquired a significant profile in a number of European strategies and programmes. Sound, comparable statistics on the economic and social significance of sport in the EU are therefore needed to provide the foundation for evidence-based policies in the field.

To achieve this objective, Eurostat, together with DG Education and Culture, has launched a plan for the regular collection and dissemination of statistics on sport. Eurostat’s sports statistics reflect the multidisciplinary nature of sport and try to take into account its importance in various fields: employment, trade, social cohesion and personal well-being.

Employment in sport represents more than 1.3 million people in the EU-27 and is steadily raising

In 2019, 1.37 million people worked in the field of sport in the EU-27. Regarding gender balance, men (54 %) outnumbered women, a percentage aligned with the one observed in total employment (see Table 1). The picture was more specific when considering age groups: in sport employment, the share of young people aged 15-29 was 35 % - twice the share observed in overall employment, while the 30-64 age group accounted for 63 % (17 percentage points less than the share reported for total employment). 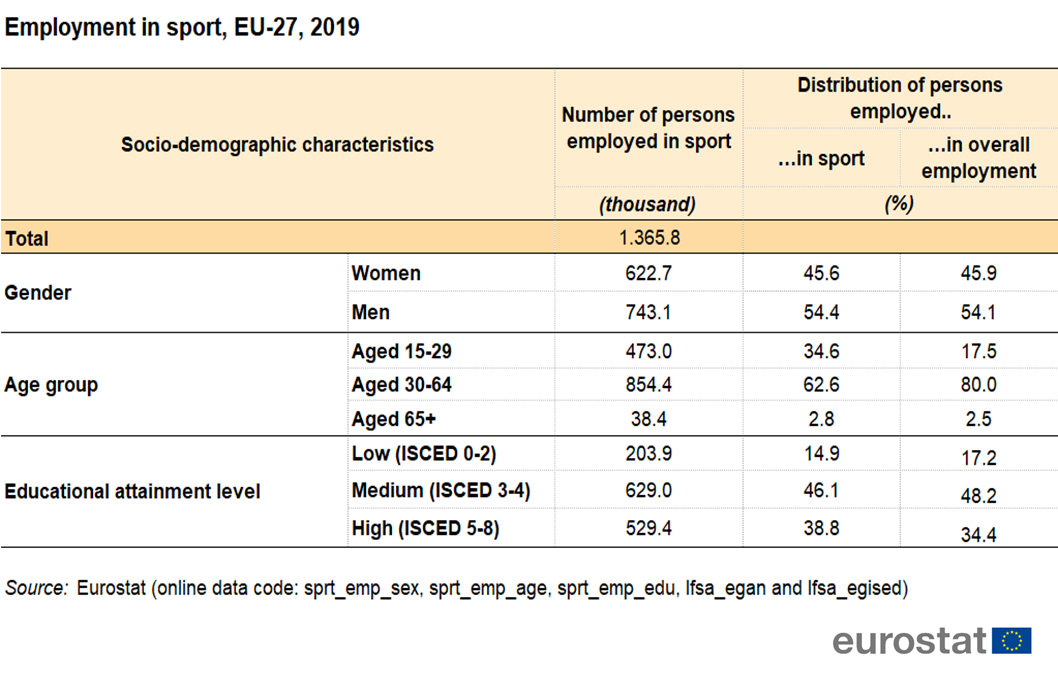 In 2019, in the EU-27, the number of people in sport employment grew by almost 200 000 more in comparison with 2014, equivalent to an overall increase of 17 %. This rise was also observed in relative terms, with sport employment representing 0.69 % of total employment in 2019, up from the 0.63 % in 2014 (see table 2). The number of people employed in sport increased in 24 out of 27 EU Member States between 2014 to 2019. Five Member States accounted for more than half of the total increase in EU-27 sport employment during the five-year period under consideration: Germany, Spain, the Netherlands, Italy and France. 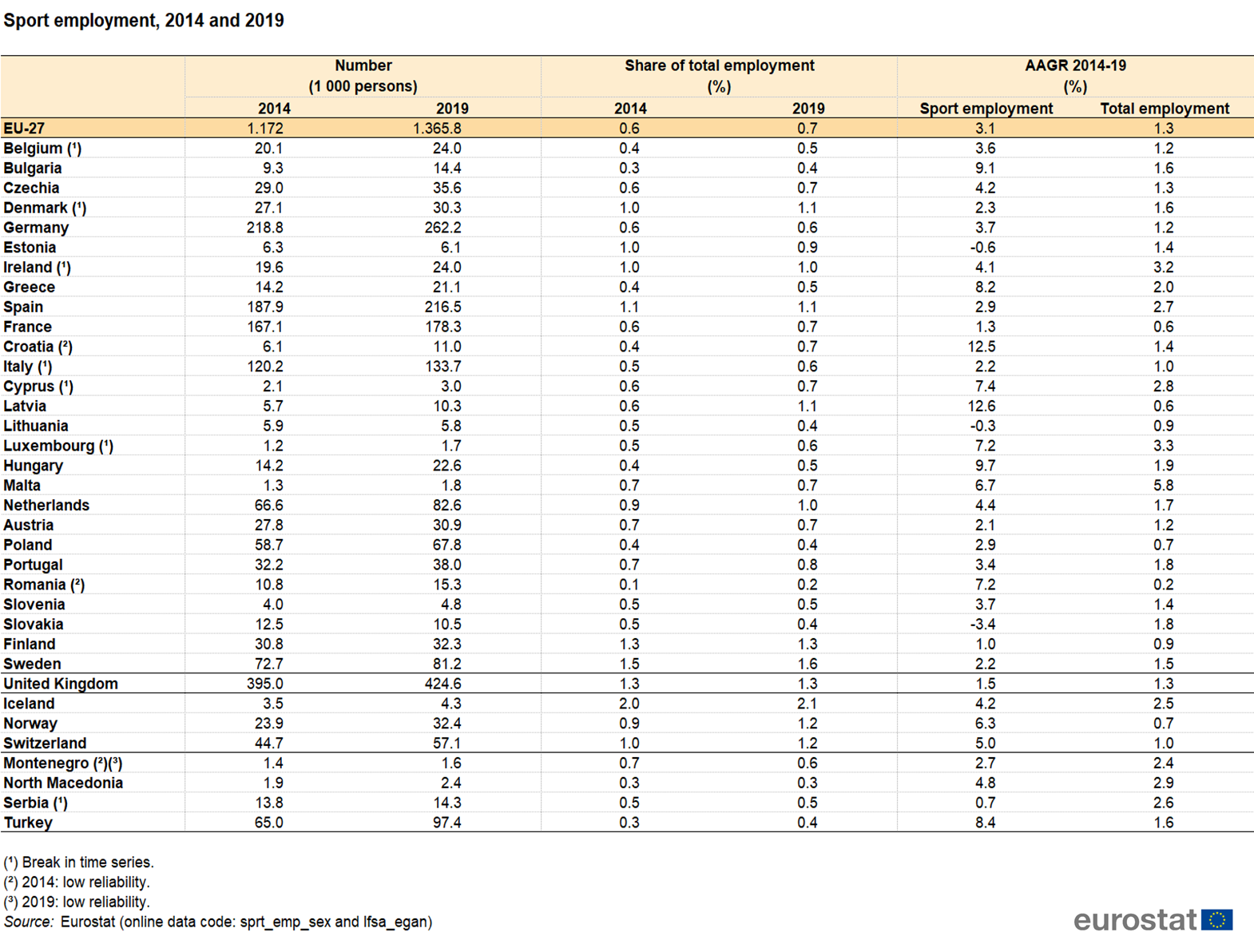 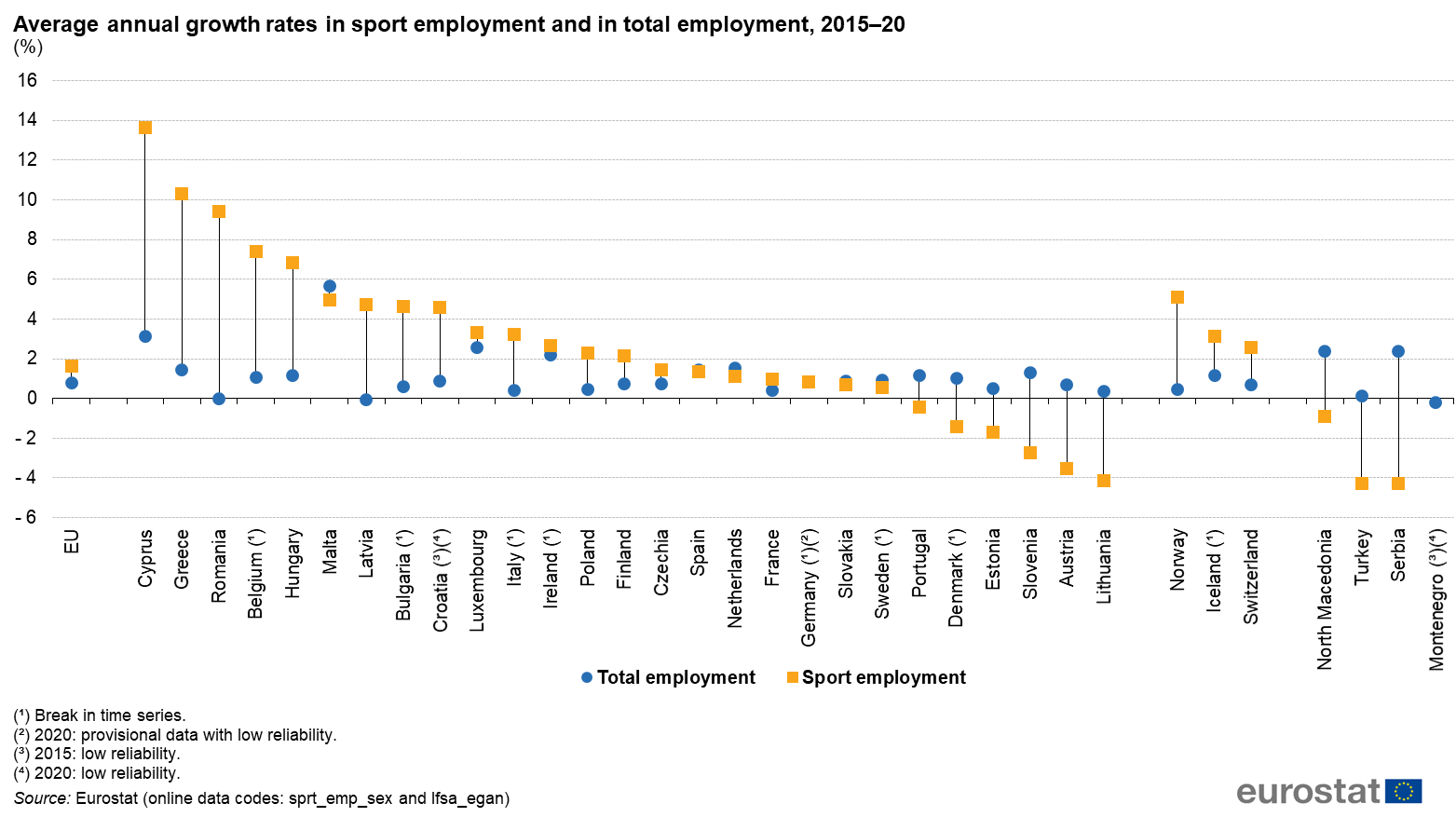 Employment in sport as a share of total employment

In 2019, employment in sport represented 0.69 % of total EU-27 employment, ranging from 0.2 % in Romania to 1.6 % in Sweden (see Figure 2). For the majority of EU Member States, sport employment shares did not surpass the 1 % threshold; in addition to Sweden, only Finland, Latvia, Spain and Denmark exceeded 1 %. Compared with total employment, jobs in sport still accounted for relatively small shares, but the contribution of sport was steadily growing: this rise was observed in 23 of 27 EU Member States. 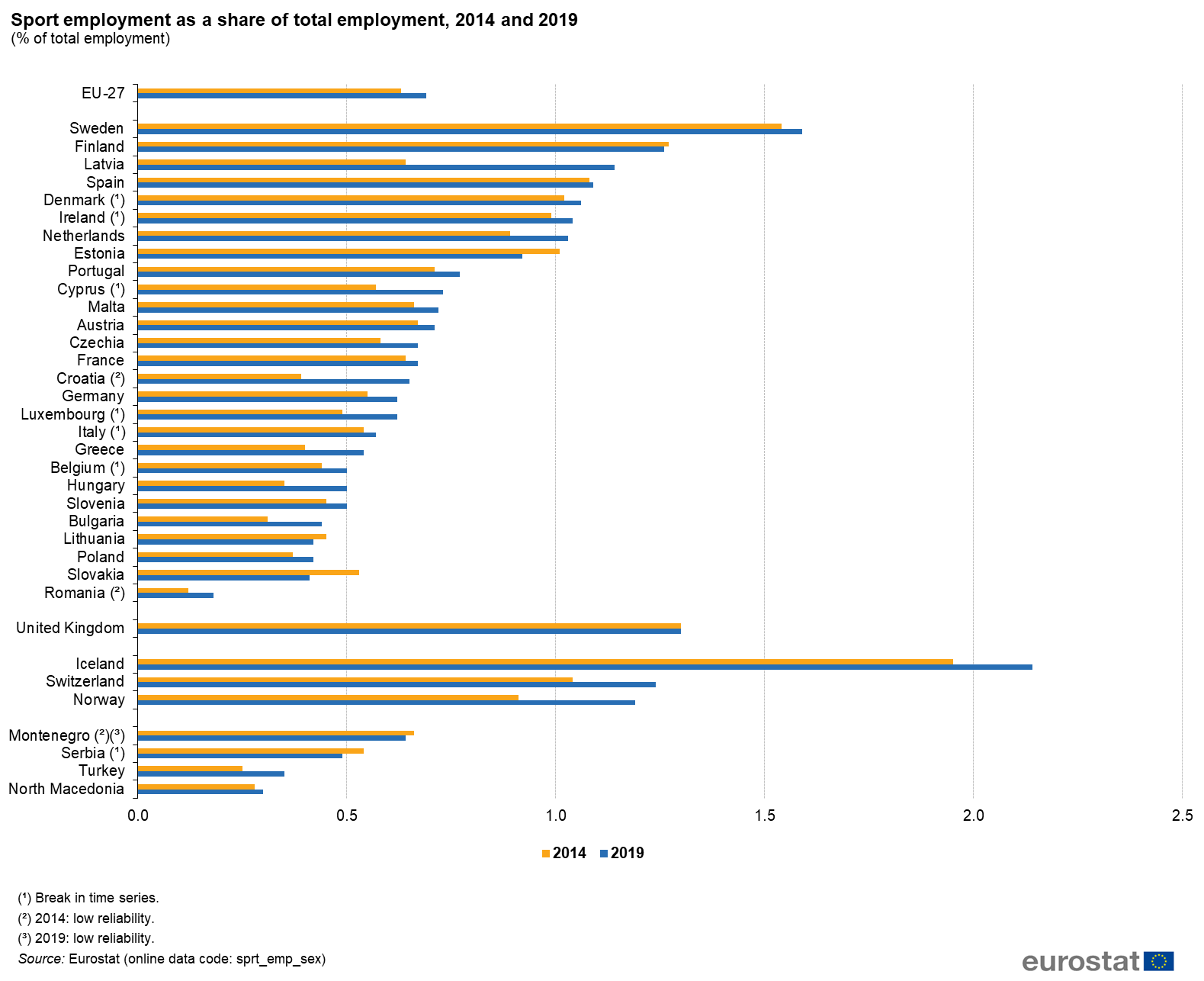 In 2019, men accounted for 54 % of sport employment in the EU-27 (see Figure 3), reflecting the structure of the total employed population. In a majority of EU Member States, fewer women than men were employed in sport, with the highest differences (where at least two thirds of employed people were men) in Malta (72 %) and Bulgaria (66 %). On the other hand, more women than men worked in sport in Finland (56 % for women), Sweden (54 %), Latvia and Germany (both 52 %). 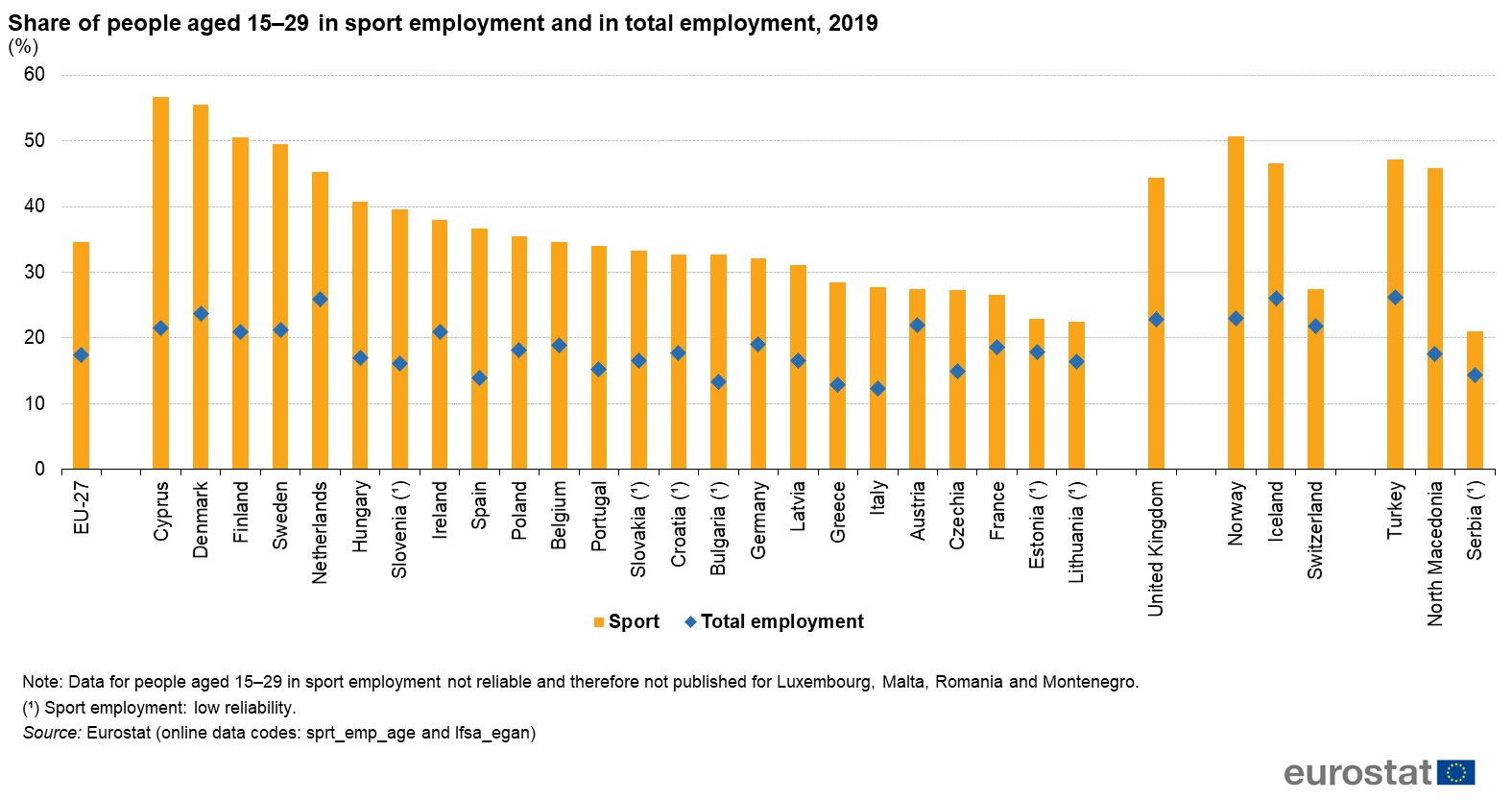 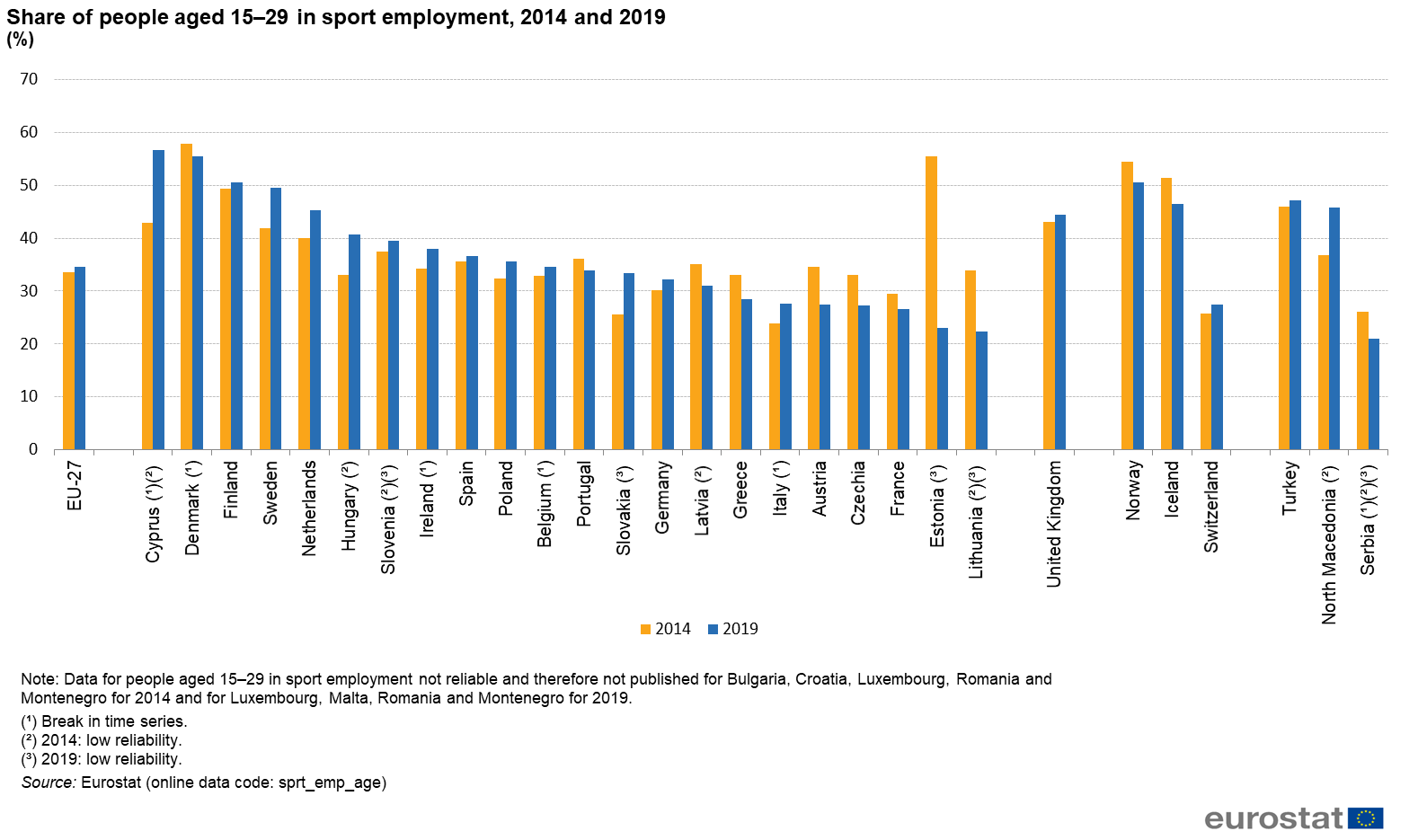 Considering the educational background of persons employed in sport in the EU-27 in 2019, 39 % had completed tertiary education (see Figure 6). This figure was slightly higher than the share of tertiary graduates in total employment (34 %). In five EU Member States - namely Cyprus (73 %), Greece (58 %), Lithuania (55 %), Spain (54 %) and France (51 %) - at least half of those working in sport were tertiary graduates. Out of the 26 EU Member States with reliable data, 14 registered a share of tertiary education graduates lower than the total EU-27 (39 %), with the lowest percentages observed in Denmark (22 %) and Finland (25 %).

In comparison with total employment, Romania had the highest proportion of sport workers with a tertiary education (ratio of 2.1), followed by Greece, Cyprus and Portugal (each with 1.6). On the other hand, in ten EU Member States, the share of tertiary graduates in sport employment was lower than that in total employment. 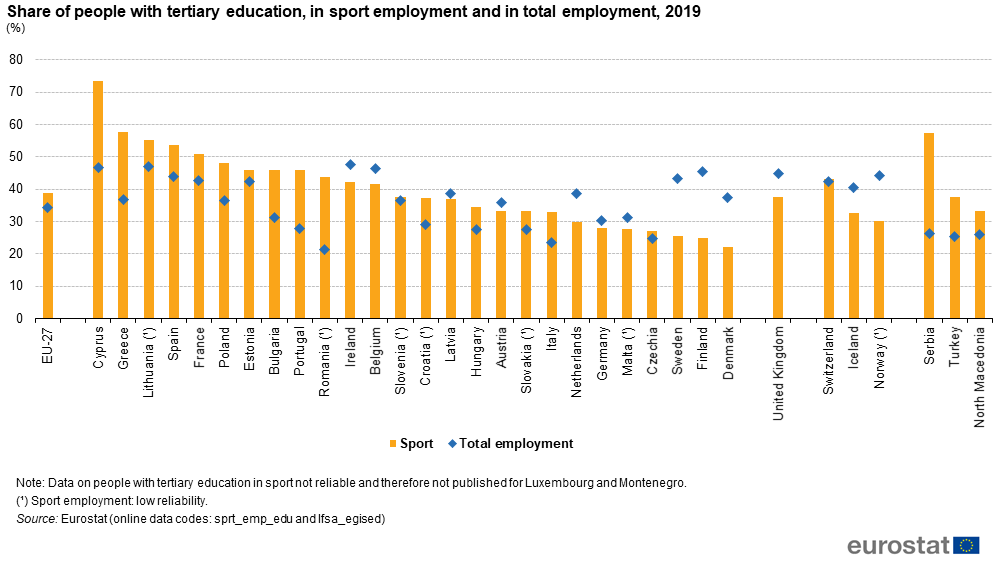 Figure 6: Share of people with tertiary education, in sport employment and in total employment, 2019
(%)
Source: Eurostat (sprt_emp_edu) and (lfsa_egised) 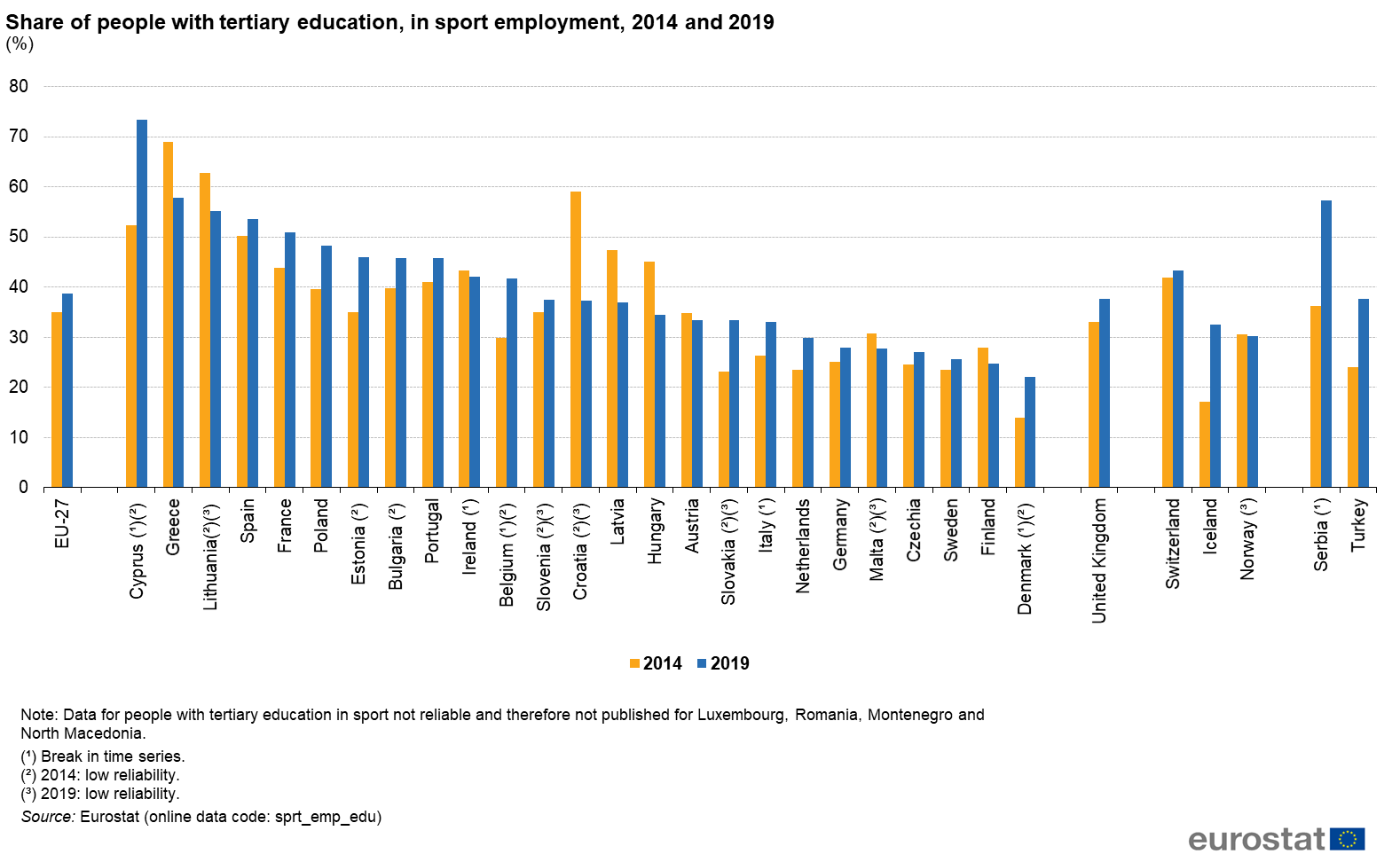 The purpose of these statistics is to throw light on the contribution sport makes to overall employment and on the main characteristics of sport employment (using variables such as age, sex or educational attainment).

The dimension of occupation has also been introduced within the scope of sport employment. The methodology used is very similar to that used to estimate cultural employment; all jobs in a NACE economic sector and jobs in a sport occupation (ISCO, 'International Standard Classification of Occupations’) outside the NACE sport sector are considered simultaneously.

Concretely, all workers recorded in NACE rev.2 code 93.1 (Sports activities) and/or ISCO-08 code 342 (Sports and fitness workers) fall within the scope of this definition of sport. In other words, employment in sport includes the working population employed:

It is important to bear in mind that the employment figures presented here are person counts, not full-time equivalents. In other words, they include all paid workers in sport-related jobs, regardless of their work pattern (full-time or part-time).

A number of expert groups have been set up to achieve concrete results. Among them, the Expert Group 'Sport and economics' (XG ECO) and the Expert Group on Health-Enhancing Physical Activity (XG HEPA) play a key role in implementing evidence-based policies in the sports sector. XG ECO, for example, has produced the economic definition of sport ('Vilnius definition'), and made progress towards developing Sport Satellite Accounts in some EU countries. XG HEPA concentrates on implementing the Council recommendations on physical activity adopted in 2013. These include a monitoring framework with indicators both on the level of physical activity and on policies to promote physical activity in the EU Member States.

Eurostat comparable data on sport employment, international trade, participation in sporting activities etc. is an important tool to contribute to the monitoring and development of the EU’s sport policies.