This Eurostat article describes the methodology of the European Union labour force survey (EU-LFS) applicable until the 2020 data collection. It gives specific information on the concept of the labour force status and the definitions of the variables used until that year.

Both articles are part of a set of online articles on the EU-LFS.

Definition of the labour force status

Labour force status is the cornerstone concept for labour market statistics. Accordingly, individuals are classified in three categories as employed, unemployed or economically inactive. These definitions are explained below. The definitions used in the EU-LFS follow the Resolution of the 13th International Conference of Labour Statisticians, convened in 1982 by the International Labour Organisation (hereafter referred as the ‘ILO guidelines’). To further improve comparability within the EU, while remaining fully compatible with the ILO guidelines, Regulation 1897/2000, gives a more precise definition of unemployment.

Employed persons comprise persons aged 15 years and more who were in one of the following categories:

This definition is applicable to employees, self-employed persons and family workers. Pay includes cash payments or 'payment in kind'(payment in goods or services rather than money), whether payment was received in the week the work was done or not.

Unemployed persons comprise persons aged 15 to 74 years who were:

For the purposes of point (3), the following are considered as specific steps:

Education and training are considered as ways of improving employability but not as methods of seeking work.

Before 2001 unemployment results used to refer to persons aged 15 years and more.

For further details, see variables WSTATOR, SEEKWORK, AVAILBLE and METHODA to METHODM in the EU-LFS user guide and the EU-LFS explanatory notes.

The active population, also called labour force, is the population employed or unemployed.

Economically inactive persons, also called people outside the labour force, are those who are neither employed nor unemployed.

Given the complexity of the definitions of employment and unemployment above, and in order to achieve a measurement as objective as possible, EU-LFS respondents are not asked directly if they are employed, unemployed or economically inactive. Instead, they are asked about their labour market behaviour in a certain reference week and then their labour status is derived according to the following derivation chart: 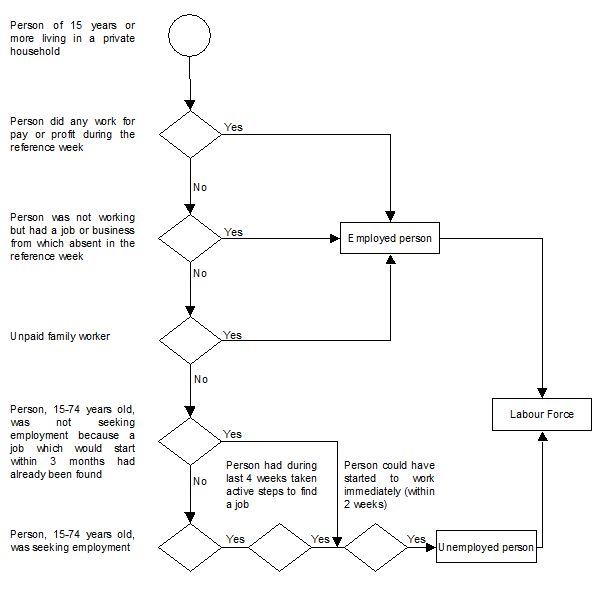 Labour force classification in the EU-LFS

For further details see derivation of the variable ILOSTAT in the EU-LFS explanatory notes and EU-LFS user guide.

Indicators to supplement the unemployment rate

In addition to the three labour statuses explained above (employment, unemployment, economic inactivity), there are three other important indicators of the labour situation:

Other concepts and definitions

The following list gives a short overview of other important concepts and definitions besides the labour force status used in the EU-LFS. The reference document for the definitions of these variables is the EU-LFS explanatory notes and EU-LFS user guide. They contain detailed information on the definition of each variable.

Educational attainment and participation in education and training