In 2020, in all but one of the EU Member States, most people in cultural employment had a tertiary level of educational attainment.

In 2020, the proportion of people who were self-employed in the field of culture in the EU was more than double the average observed for the whole economy.

This article seeks to provide an overview of developments in cultural employment and information on the relative weight of cultural employment in total employment. The analysis is subsequently extended by looking in more detail at various socioeconomic breakdowns: by age, sex, level of educational attainment, professional status and working time (full-time/part-time). The article closes with a special focus on the employment characteristics of creative and performing artists, authors, journalists and linguists.

Across the EU, there were 7.2 million people in cultural employment in 2020 - 3.6 % of the total employment 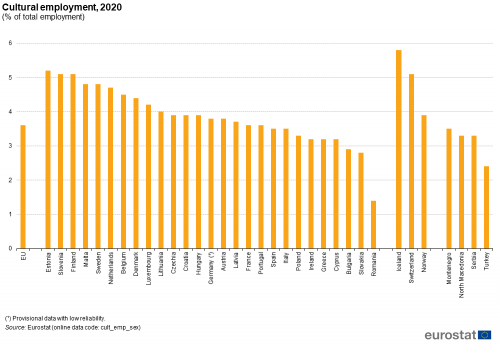 The share of cultural employment in total employment increased between 2015 and 2020 in a majority of the EU Member States: the largest relative increase was recorded for Slovenia, by 0.6 percentage points - from 4.5 % to 5.1 % and for Belgium and Croatia (by 0.5 p.p. for both countries). 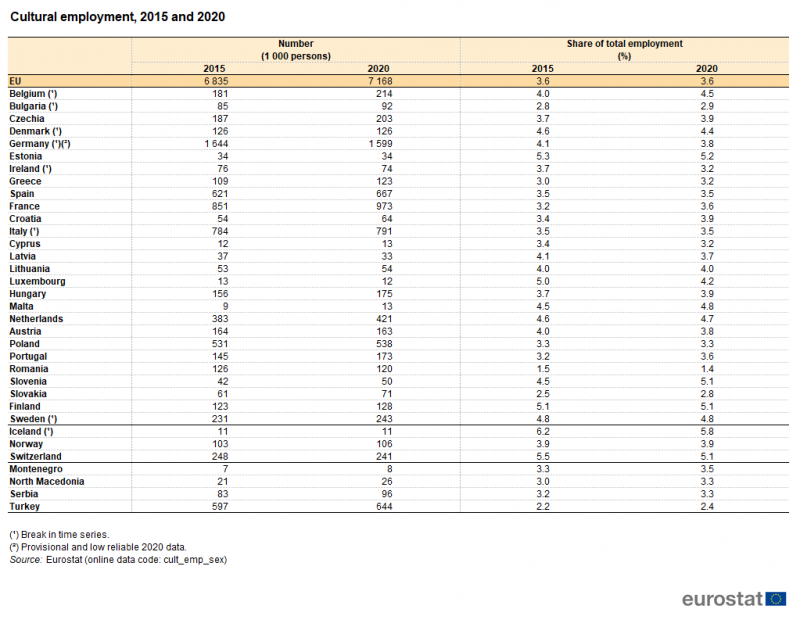 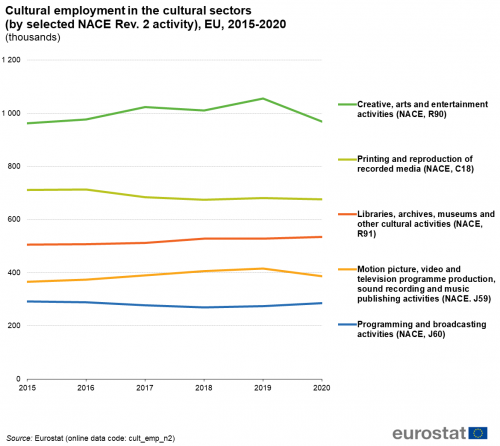 Increasing female labour participation is one of the policy objectives of the European Commission committed to promoting gender equality in the labour market through a mix of legislation, policy guidance and financial support. In 2020, women accounted for a slightly lower share of EU cultural employment than men (48.1 %, see Figure 3). This proportion, however, was higher than the average share of women in employment across the whole of the economy (46.0 %). 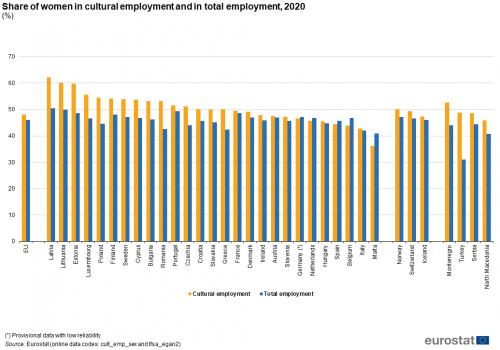 Figure 3: Share of women in cultural employment and in total employment, 2020
(%)
Source: Eurostat (cult_emp_sex) and (lfsa_egan2)

In most Member States, the percentage of young employed people did not exceed 20 % of the overall cultural employment. This share varied from 10 % in Italy, up to 21 % in the Netherlands, and 24 % in Malta. 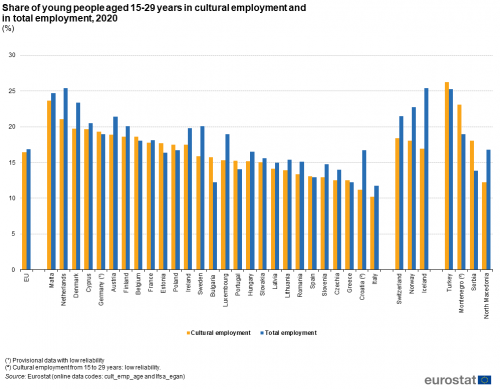 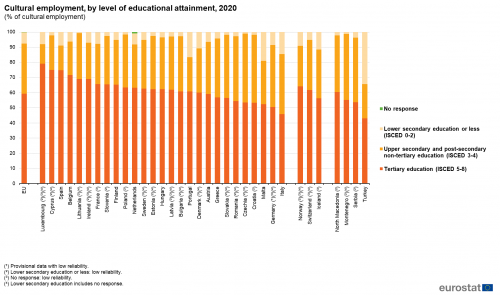 One of the most characteristic features of cultural employment is the high percentage of people with a tertiary level of educational attainment. 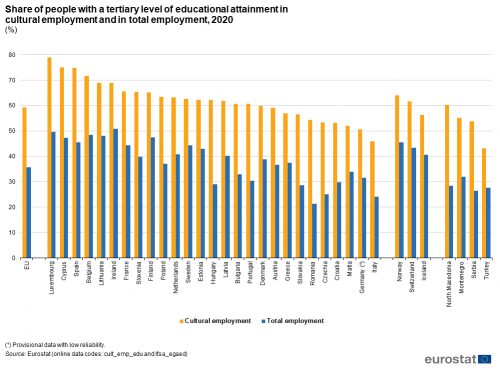 Figure 6: Share of people with a tertiary level of educational attainment in cultural employment and in total employment, 2020
(%)
Source: Eurostat (cult_emp_edu) and (lfsa_egaed)

Some other characteristics of cultural employment

The EU-LFS also provides information on a range of socioeconomic characteristics that may be used to analyse cultural employment in more detail; this next section focuses on two specific areas, namely, self-employment and working time (full-time employment).

Aside from a high propensity to employ people with a high level of educational attainment, cultural employment is also characterised by a relatively high proportion of self-employment, reflecting the independent and specialised nature of many occupations in the cultural sector — for example, authors, performing artists, musicians, painters and sculptors, or crafts people.

Across the EU, one third (33 %) of the cultural workforce was self-employed in 2020, compared with an average of 14 % for the whole economy (see Figure 7); as such, the relative weight of self-employment in the field of culture was more than twice as high as the average for total employment. 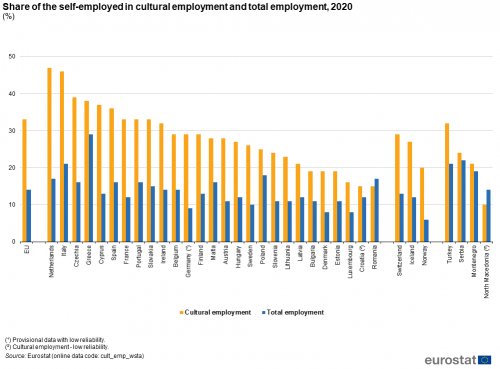 Figure 7: Share of the self-employed in cultural employment and in total employment, 2020
(%)
Source: Eurostat (cult_emp_wsta)

In 2020, three quarters (76 %) of the cultural workforce in the EU was employed on a full-time basis, while the share of full-time employment across the whole economy was higher - 81 %.

This is another specific feature of cultural employment - full-time work concerns fewer people than the average for the economy as a whole. Such a pattern has been observed in almost all Member States, with the exception of Romania and Belgium; in Slovakia, these proportions were the same (see Figure 8). The fact that the proportion of people working in the field of culture on a full-time basis was lower than the average share of full-time employment could be explained, at least in part, by a number of cultural jobs being characterised by self-employment/freelancing and job flexibility. This situation may result in job insecurity and considerable variations in income over time.

In 2020, the share of full-time employment in the cultural workforce varied considerably between the EU Member States, from 47 % in the Netherlands to 95 % in Bulgaria and Slovakia, and 97 % in Romania. This wide range reflects more general overall differences between national labour markets (importance of part-time work) rather than the specific nature of cultural employment. Despite the large discrepancies mentioned above, only in two Member States (Finland and Cyprus) was the gap in full-time work between cultural employment and total employment at least 10 percentage points. 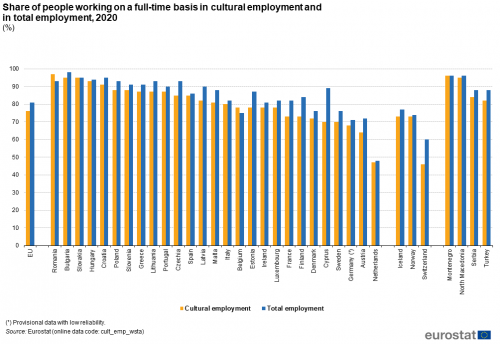 Figure 8: Share of people working on a full-time basis in cultural employment and in total employment, 2020
(%)
Source: Eurostat (cult_emp_wsta)

In 2020, the average gender gap for full-time cultural employment in the EU - in favor of men - was 15 percentage points (the average for total employment in the European Union was 21 p.p.). The Member States with the largest gender gap (over 20 p.p.) were Malta, Germany, Austria and the Netherlands (see Figure 9). Romania was the only Member State in which more women than men were employed full-time in the cultural sector. A relatively small gender gap (in favour of men), reaching at most three percentage points, was also recorded for Bulgaria, Lithuania, Croatia, Portugal and Cyprus.

Figure 9: Share of people working on a full-time basis in cultural employment, by sex, 2020
(%)
Source: Eurostat (cult_emp_edu) and (cult_emp_wsta)

This final section presents information on the employment characteristics for two specific groups of cultural occupations (as distinguished in ISCO-08 classification): creative and performing artists (including visual artists, musicians, dancers, actors, film directors, and so on), and authors, journalists and linguists. These two groups of occupations are hereafter referred to as ’artists and writers’. 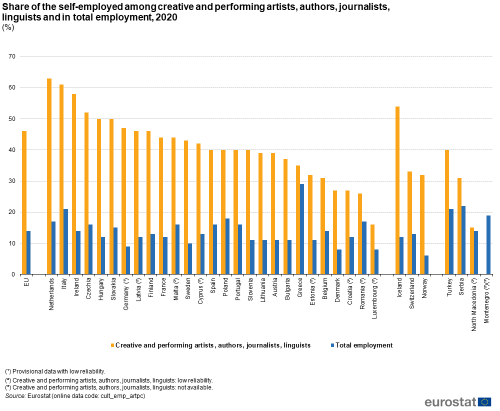 Figure 10: Share of the self-employed among creative and performing artists, authors, journalists, linguists and in total employment, 2020
(%)
Source: Eurostat (cult_emp_artpc)

As shown in Table 2, some 71 % of artists and writers in the EU worked on a full-time basis in 2020, which was lower than the corresponding share of people working full-time in the field of culture (76 %) or across the whole economy (81 %).

In 2020, less than two-thirds of all artists and writers working as employees in Cyprus (64 %, low reliability), France (60 %) and Portugal (59 %) had a permanent contract. In all three countries listed above, there was also a large difference (more than 20 percentage points) when comparing the percentage of employees with a permanent contract noted for artists and writers with that for the whole national economy. 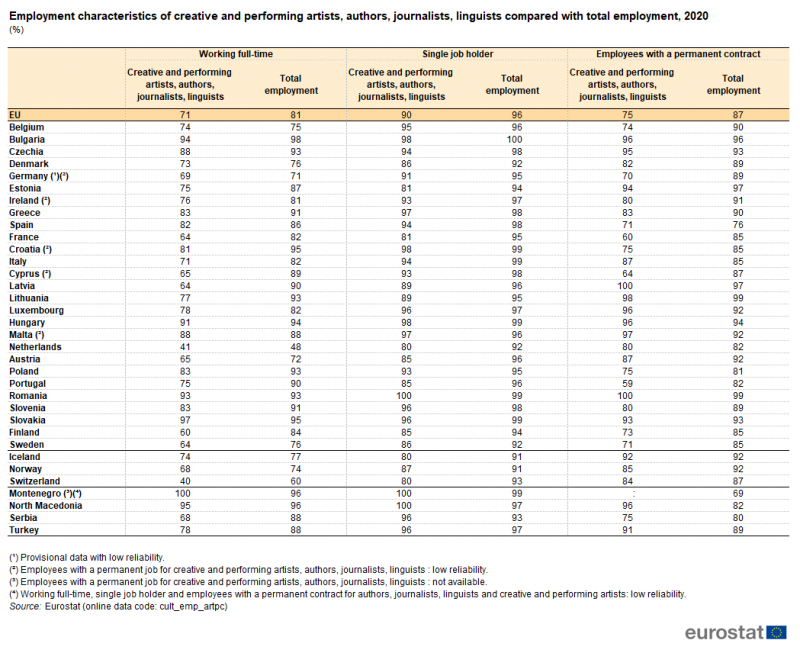 The statistical concept of cultural employment is based on methodology proposed by the European Statistical System Network on Culture (see its ESSnet-Culture final report (2012)). 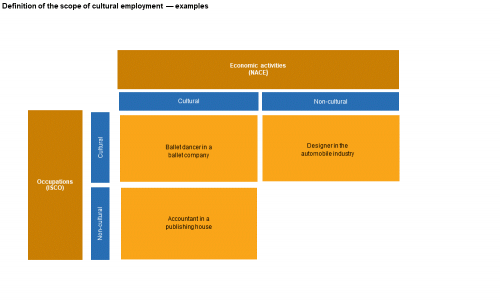 Eurostat’s statistics on cultural employment are sourced from the EU’s labour force survey (EU-LFS); the population covered by this survey concerns people aged 15 years or more. Eurostat compiles data on cultural employment according to the field of economic activity in which the employed person works and according to their occupation, using a matrix to create an aggregate for all cultural employment. The data may be analysed at a more detailed level, for example, by looking at socioeconomic breakdowns by sex, by age or by level of educational attainment.

Two lists below include economic activities (NACE Rev. 2) and occupations (ISCO-08) that were used to calculate aggregates for cultural employment using data from the EU-LFS.

Statistics presented in this article are derived from the EU-LFS. This survey requires data to be provided for NACE divisions (two-digit level) and for ISCO minor groups (three-digit level). However, the majority of countries provide more detailed data on a voluntary basis. For countries missing information at NACE three-digit level or/and ISCO four-digits level, the estimation is done using coefficients calculated for countries providing the highest level of detail.

When estimating cultural employment, it is difficult to determine what proportion of some economic activities and occupations is genuinely cultural. For this reason, activities and occupations which are only partially cultural were excluded from the estimates. For example, sports, recreation and cultural centre managers (ISCO Unit Group 1431) refers to an occupation with a cultural component; however, it is impossible to estimate the share specifically relating to culture. Therefore, and taking a conservative approach, it was decided to exclude this occupation (and other similar cases) when computing an aggregate for cultural employment.

Moreover, the EU-LFS collects (detailed enough) information on the economic activity and occupation only of the respondent’s main job and therefore omits information pertaining to secondary jobs in the field of culture. As such, these secondary jobs are excluded from the aggregate covering cultural employment.

In view of these limitations and the approach adopted, data on cultural employment are likely to underestimate the true extent of employment in this field.

Within the context of the EU-LFS: